No One Looks Cool in a Bee Suit…

…it is, however, quite thrilling to be in one. Although you wouldn’t want a bee in one.

As it happens, Bex’ sister Louise, and her husband Chris, and Chris’ father Jim, are all avid operators of apiaries. Years ago…in the British equivalent of the Boy Scouts, Chris’ and his buddy Rob learned to love bees. Rob is now a demi-god amongst Yorkshire bee-folk, and Chris and his father have been herding bees ever since. Louise is a recent convert. 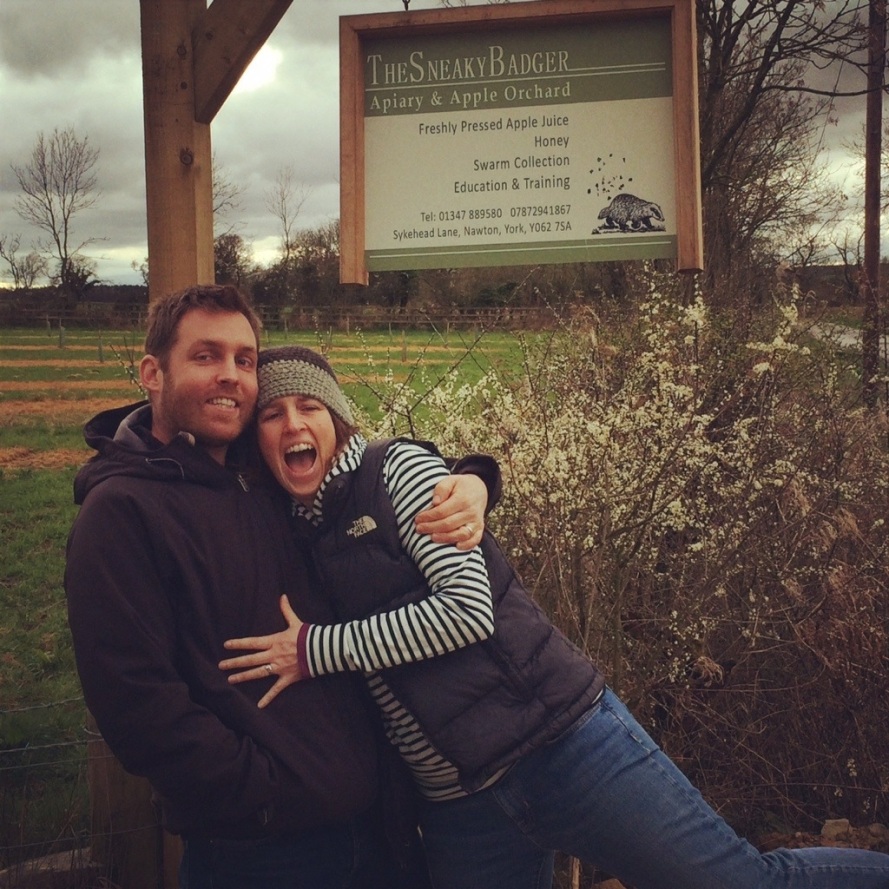 Chris and Louise own a small apple orchard and keep a few hives of bees on the orchard property. Today we got to visit the bees.

I’ve been talking to Chris and Louise and Becci about this visit for well over a year. I think it started when I first met Louise and Chris during a visit to the States back in the summer of 2012. Bees and their organizational machinations are absolutely fascinating. Bees operate in vast groups. Bees each have specific jobs. Bees communicate effectively and quickly with one another via movement, sound, and smell. Bees operate in a large cooperative community without any signs of dissent or internal strife. Bees carefully regulate the temperature of their hive with their movements and organization. Bees are the only animal that directly produce their own food, and bees are essential to the entire food chain that allows you and I to exist. If bees were to cease to exist, there is no known direct replacement for them in the production of our food.

So today we finally donned bee suits and went to videe the insides of the hives at the Sneaky Badger apiary. Bee suits themselves are as you would expect: heavy, all-encompassing, zippered and gathered at the arms and legs. 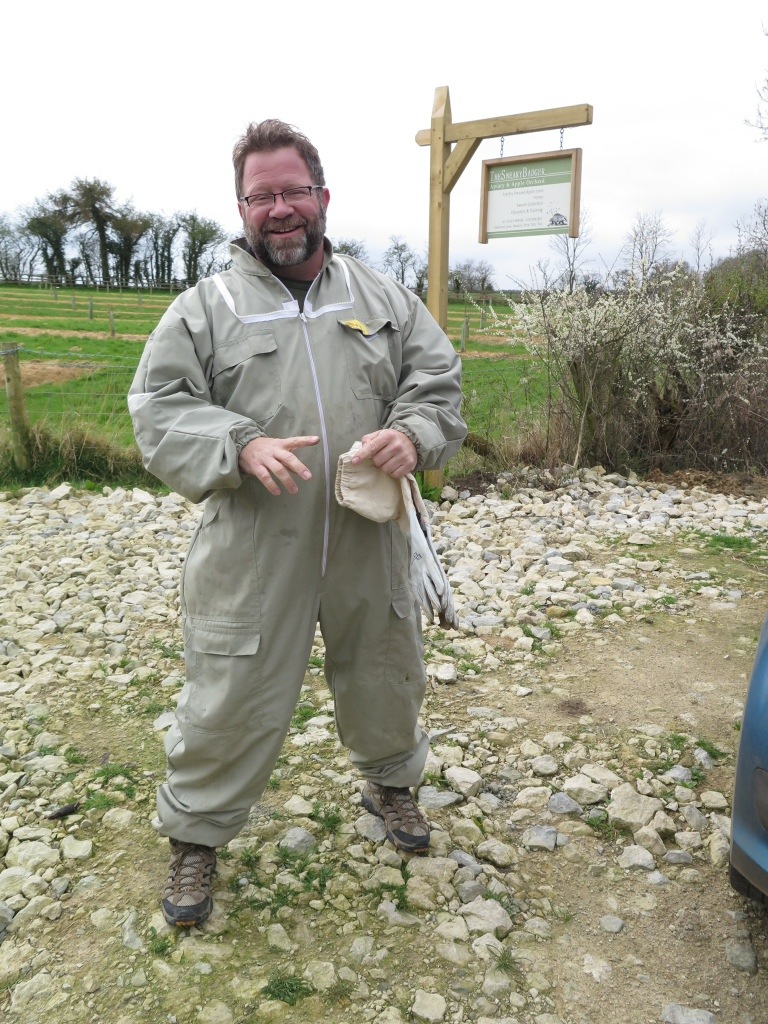 There is a meshy hood. I’ve been warned not push the mesh close to my face (as you might while scratching an itch) as that might facilitate a sting. Opportunism is also amongst the bee’s strengths!

Chris also advised tucking the bee suit’s pant legs into one’s shoes. “Bee’s like to go up”. Roger that. I would not enjoy a bee up the pant leg.

Chris and I then proceeded to set upon the hives, opening each and having a look inside.

Each of these hives starts as a manmade box, filled with frames. Each frame can be slid in and out of the box independently, and each frame is pre-loaded with a sheet of wax, which the bees use as source material to produce rows and columns of cells, as you have seen on “honeycombs”. 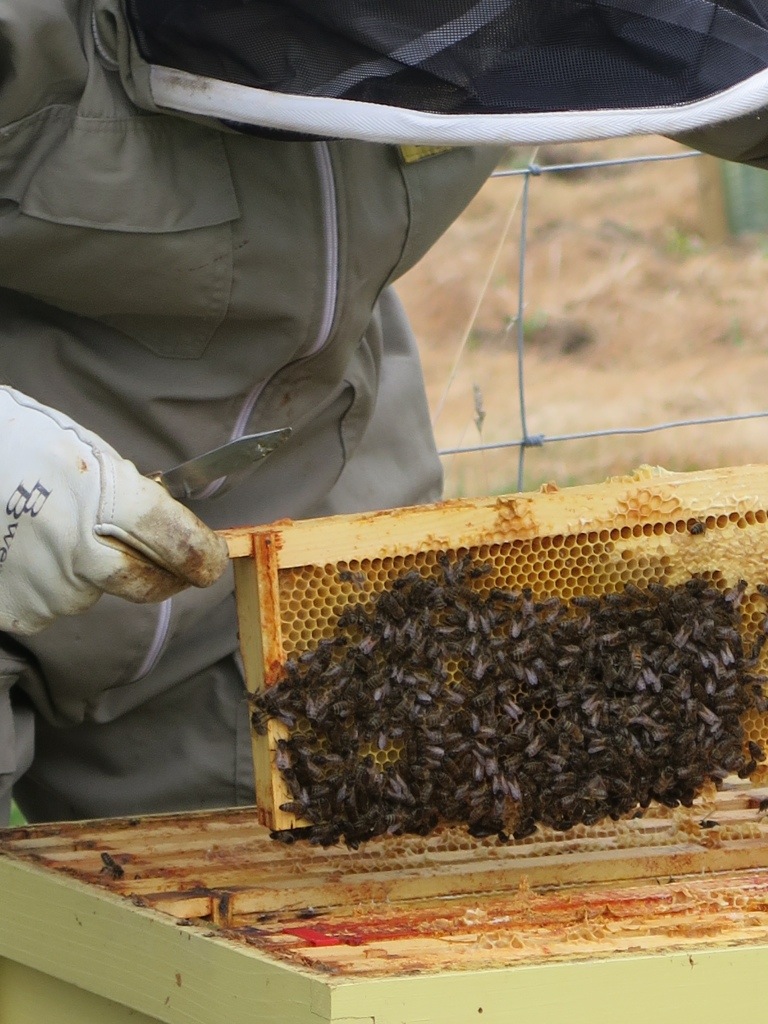 Each of these cells can be used to store honey, which the bees produce, or to store fertilized eggs, deposited by the hive’s queen bee. The worker bees create slightly different sized cells for each type of bee to be produced; the queen detects the size of the cell as she passes across it, and deposits the correct ingredients to produce the type of bee indicated. This process is further assisted by the food that the incubating bees are fed.

While we fiddled around with their homes, the bees flew around us. A few landed on us to investigate. One interesting thing I saw, although we don’t have any photographic evidence of it, is that some bees come back to the hive full up with pollen on their legs. They appear to be wearing tiny yellow pants.

Becci and Louise stood back and observed the fun ‘n’ games. Becci took all of the photos that you see here.

Eventually, we stole one of their frames filled with fresh honey.

Chris assured me that they produce way more than they need for food, and that taking some away just causes them to be more fastidious in their production. That conversation assuaged my guilt sufficiently to go devour a bunch of that fresh honey. It was delicious. 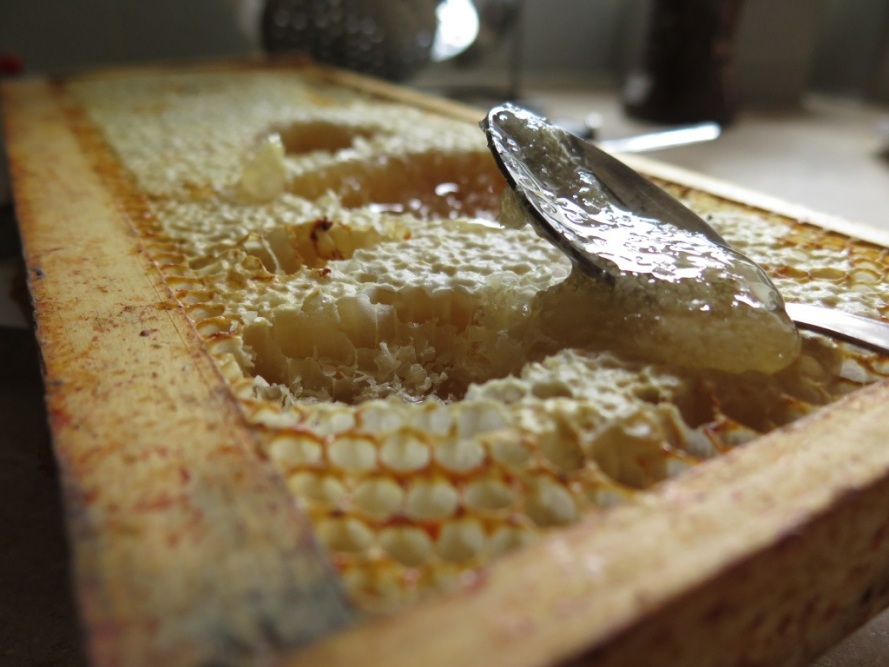 * All bee facts in this post are guaranteed to be accurate, or your money back.