With the weather forecast pointing towards rain for today, we planned to spend most of the day inside in the National Museum of Scotland and the National Galleries. As it turns out, we had plenty of sunshine and plenty of wind. Just before we crossed the road to the museum, I noticed Greyfriars Kirk on the left. 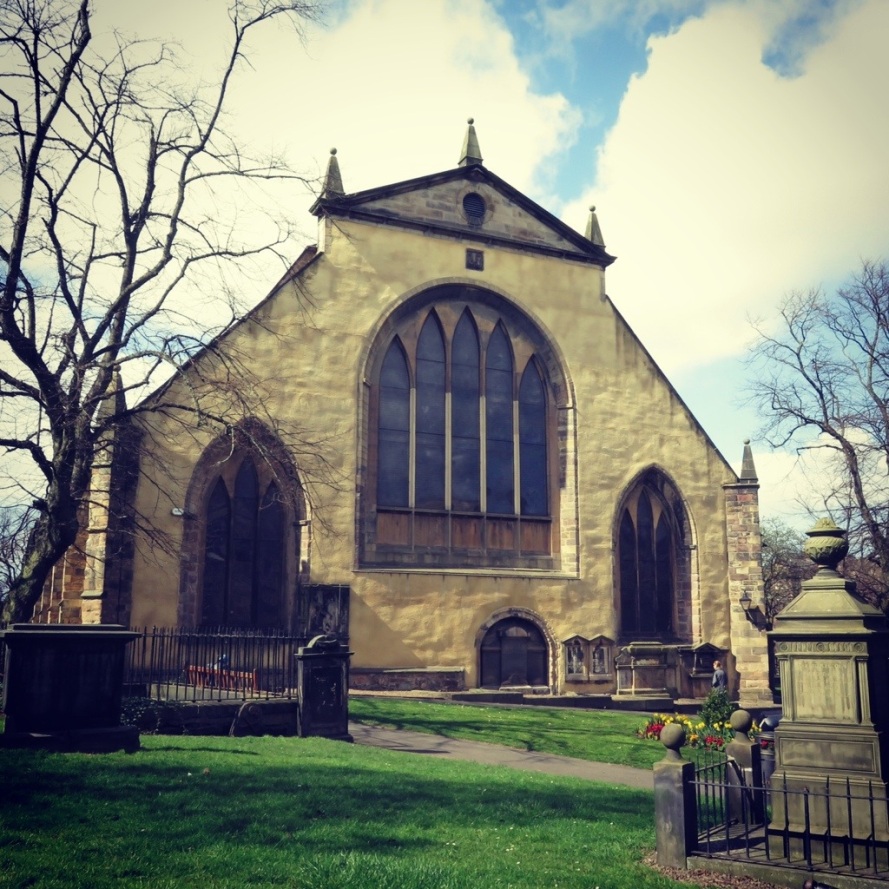 Greyfriars was low down on the list for me, mainly because it all seemed to be centered around Greyfriars Bobby, a terrier that sat on his master’s grave for 14 years, and was then buried in the church yard. Lo, and behold! There were lots of tourists lined up to take a picture next to Bobbie’s gravestone. However, this little beauty caught my eye.

We ended up spending about 45 minutes wandering around the graveyard, which is absolutely fascinating! The church itself was completed in 1620, and it stands on the site of a pre-Reformation building of the Franciscan order, the “Grey Friars” It’s also one of the oldest surviving buildings outside of Old Town Edinburgh proper. Obviously, there are burials in the ‘Kirkyard’ that date back to the late 16th century. 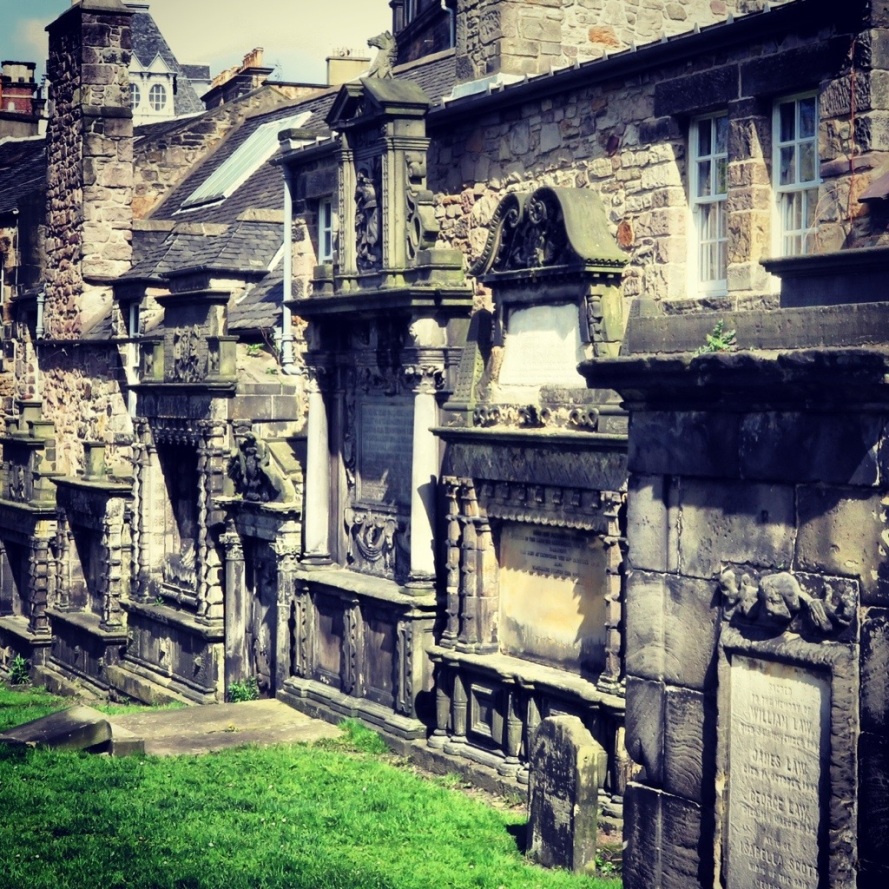 The monuments include enclosed vaults, which were built to deter grave robbing, a highly popular past time which funded numerous folks, not just by the loot they managed to grab, but payment for the bodies that they turned into student of anatomy for dissection. Greyfriars has two mortsafes, which are essentially holes dug into the ground with iron bars across the top. You could lease them to store your loved one’s remains in until they were at a state of decomposition that prevented any real value in using them for dissection purposes. The monuments are deliciously macabre, and I have collected my favorite skull motifs here, mainly for the enjoyment of Angela.

And, hey…if you run out of space, just bung ’em on the walls. 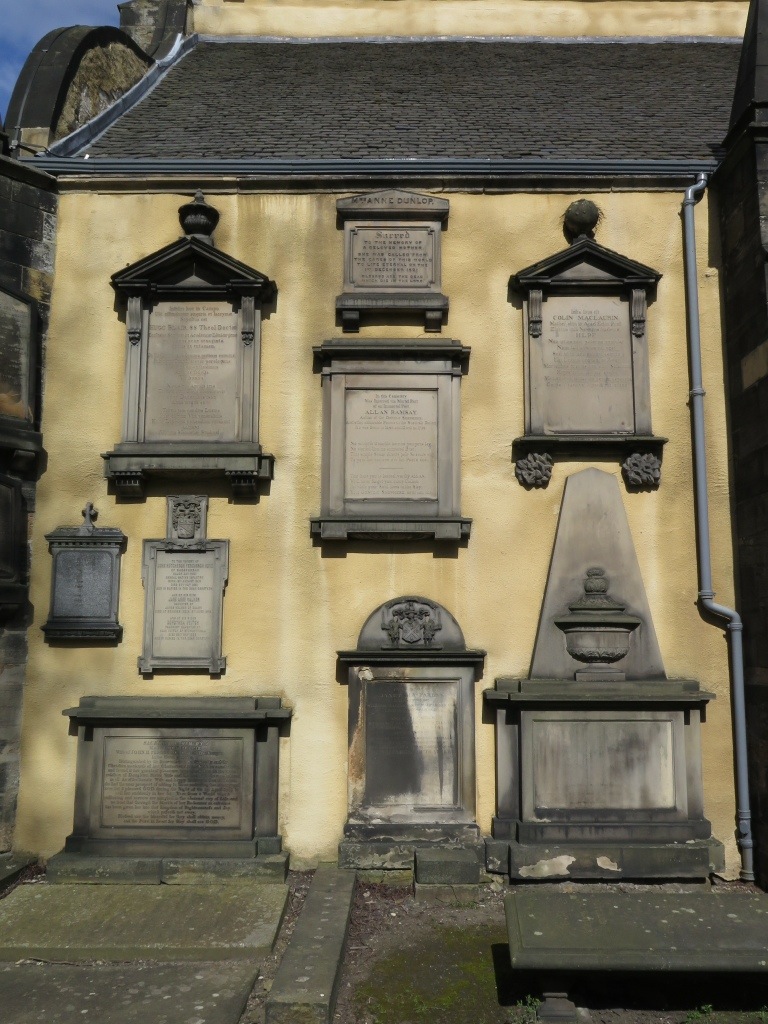 All in all, it was a nice diversion and I am glad we popped in.

Next up was the National Museum of Scotland, which is housed in a beautiful combination of a Victorian grand central hall and a newly renovated modern building. 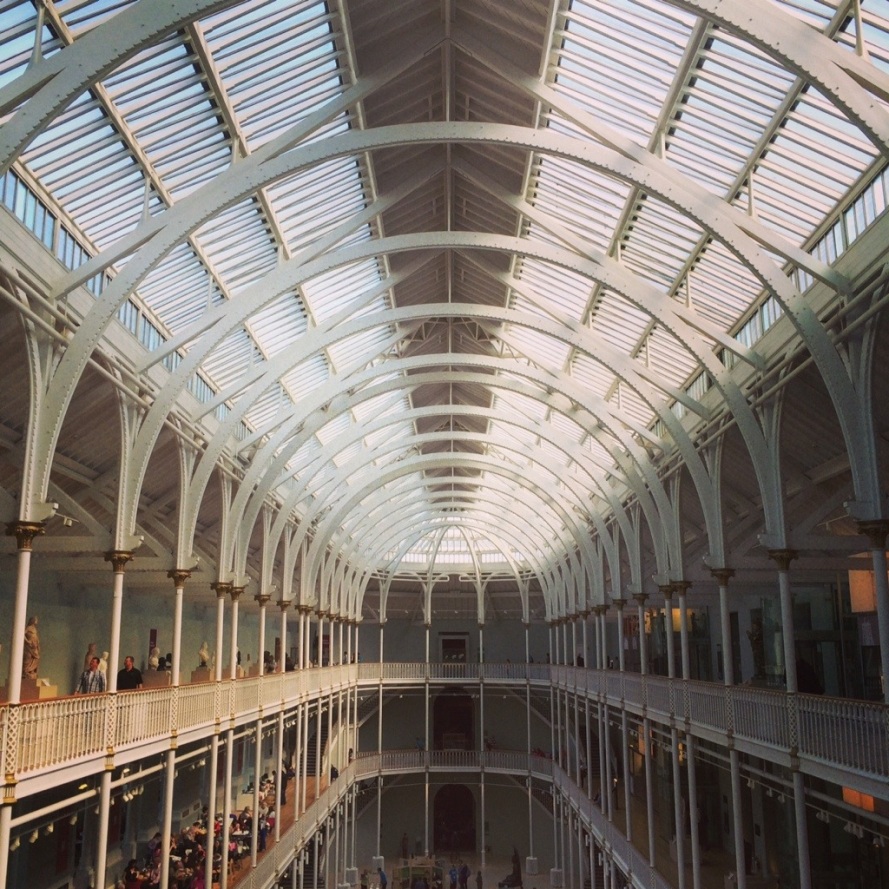 It would take an entire day to get through the entire collection, which was displayed in really innovative and design-centric manner. John’s favorite thing was a demonstration of a 3D printer. My favorite thing on display was a statue of Jack Black, made circa 1739.

There are many Andy Goldsworthy creations here, which was the highlight of the day for me. Instead of his work being displayed as solo pieces, they did a marvelous job of allowing his creations to support the displays in the Early Life galleries. They were truly a hidden treasure, and we almost missed them!

. We popped up to the roof top terrace, to see the sights and catch some more Goldsworthy.

.At this point we were gnawing our arms off, so we left the museum with 50% of the exhibits unseen and wandered around until we found a spot out of the wind, in one of the many quads of Edinburgh University. 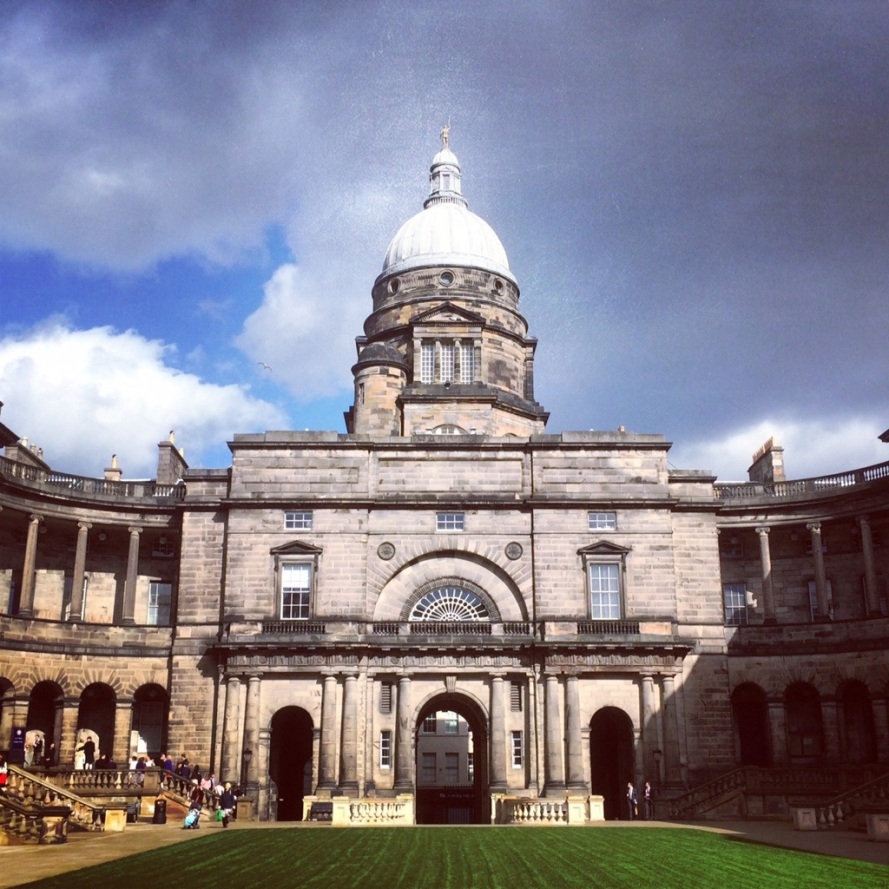 Other than the delicious sammies, highlights of our lunch break included coaxing a pigeon to eat some bread off John’s shoe and be nosy parkers and spy on someone’s wedding party, kilts and all. It was a fairly blustery day, so we can say 100% that the boys go regimental. We saw Scottish bums!

Bellies full and legs rested, we decided to get out of the city and walk the river to Leith. We picked up a 12 3/4 mile path that follows the river to the Firth of Forth. The sun and some swans kept us company for a while.

If anyone was wondering, we were humming The Proclaimers the whole way down…and here it is, Sunshine on Leith.

We had intended to poke around the Royal Yacht, but our progress was marred by an enormous shopping center between ourselves and the docks. UK malls are exactly the same as US malls. Soul Sucking.

We wandered up and down and around to find an exit out of the mall on the dock side, which we eventually found via the parking deck. However, pedestrian access was restricted, the only way to see the bloody thing is via a walkway from the interior of the mall. We entered the mall once again, only to find that the exhibit closed at 4:00pm. Fortunately for us, it was a huge waste of time. We bussed it back to Tollcross and hunkered down at the Hanging Bat to plan accommodation for Denmark. We say goodbye to Edinburgh now and head to the Highlands!