It was time for nature once again! As I have said before, I’ve always thought I had some country mouse in me, but I didn’t realize until this trip that that I seem to need greenery to recharge.

We took part in our first guided tour in the journey, a day trip to Lahemaa National Park. The video on the website showed beautiful people, becoming instant friends, and loafing joyfully around in a forest together wearing the sort of faces women wear in yoghurt and tampon commercials. I had a feeling it wouldn’t be quite like that. It started off fairly grim, a black van with a dent in the side that we shared with an American woman and a couple from France and Japan. No talking, driving through the outskirts of Tallinn which are filled with Soviet-built tower blocks, decorated with graffiti.

Our host, Yuri (George in American), was a very energetic, young and cheeky lad who constantly had to remind himself to ‘get Estonian’, which essentially means to button up and act more reserved. He wasn’t very good at it and was soon doing forward rolls on the grass and bell kicks through the forest again. No joke.

It’s 8 meters tall and more than 50 meters wide. It freezes in the winter and you can walk behind the falls. In the spring, it’s the color of pee. We moved on fairly quickly.

Next up was an abandoned hydroelectric plant, all rusted and broken. Also, there was a dead beaver. Hmmm…this day trip was getting really exciting.

After the dead beaver, the trip picked up a bit. We pulled into the parking lot of a Beaver trail, with the promise of beaver dams. But before we saw ‘beaver action’, as Yuri put it…we could barely contain our snickering…we were introduced to kiiking.

Kiiking is a sport that was invented in Estonia in the mid-ninties. It involves being strapped to the swing by your feet, after which you begin pumping the swing by squatting and standing up. The result is a team of people/fools swinging 360 degrees, going over the fulcrum of the swing. The longer the ‘arms’ of the swing (the bit you grip with your hands) the harder to get the swing to go 360 degrees. The world record is 7 meters and 2 centimeters. The swing John eagerly climbed onto was built in such a way that the 360 degree swing is impossible, which I was thankful for. Barbara (the American) and I looked on in amusement until Yuri put an end to the kiiking. We followed a trail past some broken beaver dams but their were no beavers (alive or dead). I always though beavers lived in the dams, but actually their dens are on the bank and they build the dams to raise the water level over their front door to protect their homes from predators. Clever chaps.

As we walked back to the van, we passed a small, open air hut filled with straw. Yuri told us it was a feeding station for local wildlife. “What sort of wildlife?” we asked….”Oh, Elk, wolves…bears. Things like that.” I think we all walked a little faster to the van after that.

The last trip before lunch was to the Sagadi manor house, which looked a bit like the Grand Budapest Hotel. We got 30 minutes to walk around the outside, which to be honest, was the exact amount of time needed…plus 10 minutes.

Lunch time! We were taken to the remote fishing village of Kasmu for lunch in a local house/Maritime museum. It was here the the group finally started to talking to one another, swapping jokes about the Finns and sharing amusing ferry cruise stories. We ate salmon and potatoes and it was flipping delicious. The setting was pretty awesome as well.

After lunch, we were given an hour to explore the village, most of which we spent climbing around on the beach. These huge boulders are from Scandinavia, brought to Estonia via glaciers.

It was a beautiful and calm scene, the hour passed too fast. John has an un-quenchable need for coca-cola, wifi and, as it turns out, climbing rickety things. Just on the shoreline was an old Soviet border patrol tower…up he went!

It was sad to say goodbye to the sea, but we climbed back into the van to our next stop. We were going further and further into the park, which consists of 280 square miles. The roads, which through Estonia are not particularly great, became worse…bumps and potholes sent our van bouncing along into the park. We came to a crossroads which must have had some attraction near it, as there was a bus and a couple of cars in the parking lot. Yuri looked out both windows, checked the rear view mirror to make sure no-one was watching and slowly maneuvered the van down a tiny little road that you were obviously not supposed to go down. It was the vehicular version of tip-toeing. As we travelled down the road, the trees closed in and their branches started to scrape the sides of the van. I asked “are we going somewhere secret?”. “Sort of…we have a license to come here, but others don’t.” We came upon a clearing, just off of the Baltic sea. We had arrived at an abandoned Soviet submarine base!

The Hara submarine base was built in the mid-fifties but was abandoned in 1991 after Estonian independence. Yuri told us that it was using for deperming or degaussing Soviet submarines and ships, essentially de-magnetizing them. What?!? Yep…as it turns out, any metal hulled ship or submarine develops a magnetic signature as it travels through the ocean, due to a magneto-mechanical interaction with the Earth’s magnetic field. This signature can be exploited by magnetic mines or MAD equipment (sonar for magnetic fields). In order to deperm as vessel, you encircle the ship with heavy gauge copper cables and pass 4000+ amperes through the cables. This ‘resets’ the magnetic signature. What’s left of the base has been covered in graffiti, but some of the Soviet signs remain. 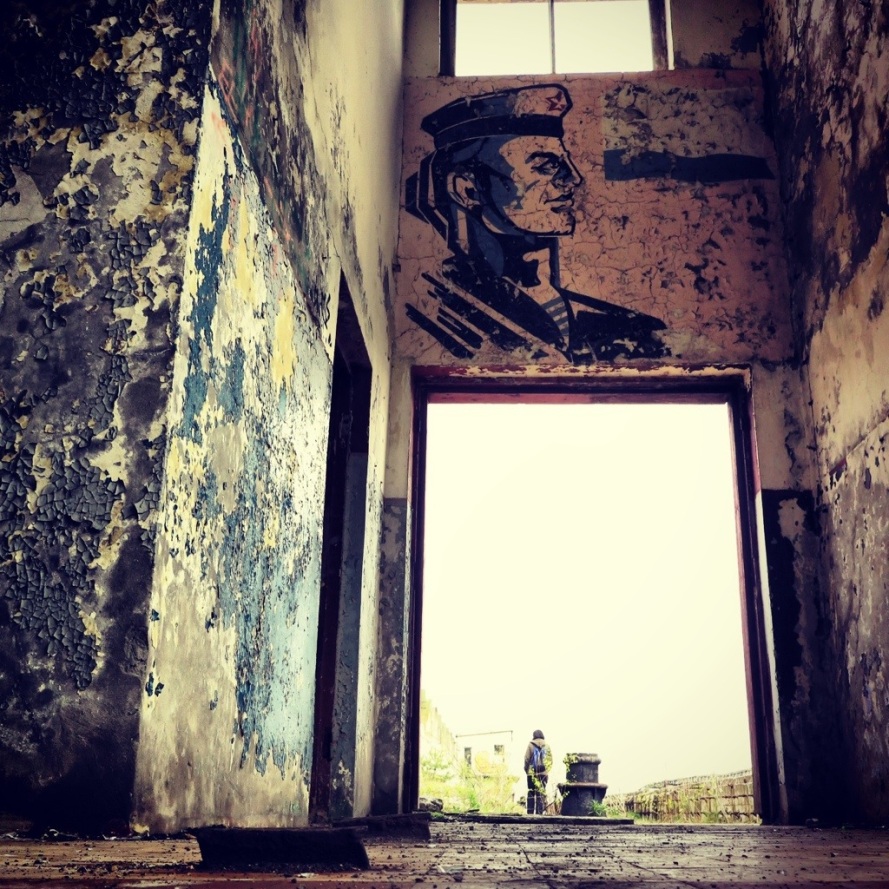 I lost track of John while I was taking pictures, but I took a break and scanned the base. Where was he? CLIMBING. Busted.

It was an eerie place, for sure, and I was fairly certain we were being monitored. During our visit, another car parked next to our van…here we go… I thought, my mother’s nightmares have come true, we are about to be incarcerated for climbing all over a Soviet military base. Thankfully, it was just a couple that was sightseeing. As it turns out, that couple saved our bacon. As Yuri was bouncing and skipping around, the keys to the van fell out of his pocket. Now, we were right on the sea, walking on a concrete structure full of holes and cracks, 70 km away from civilization and Yuri lost the car keys. We were unaware of this incident until the couple passed us way down the end of the base and handed me the keys, saying they had found them on the road. I had been watching Yuri run around at the other end of the base, but had assumed that he was just being Yuri. It took me 5 minutes to get to him, crawling over uneven floors and leaping over holes, and he collapsed in relief when I handed him the keys. After he managed to unclench his butt-hole and breathe in enough oxygen, we made our way back to the van and left the base.

Our last stop on the tour was the bog!

It was prettier than it sounds…miles of quiet, green space that you walked through via a wooden platform sunk into the peat. We depth tested the bog just off the walkway, it was 12ft deep in some parts. There’s definitely bog monsters in there. We think they look like this:

We managed to suppress our fear of getting our ankles grabbed by Gollums and had a lovely walk through the bog. 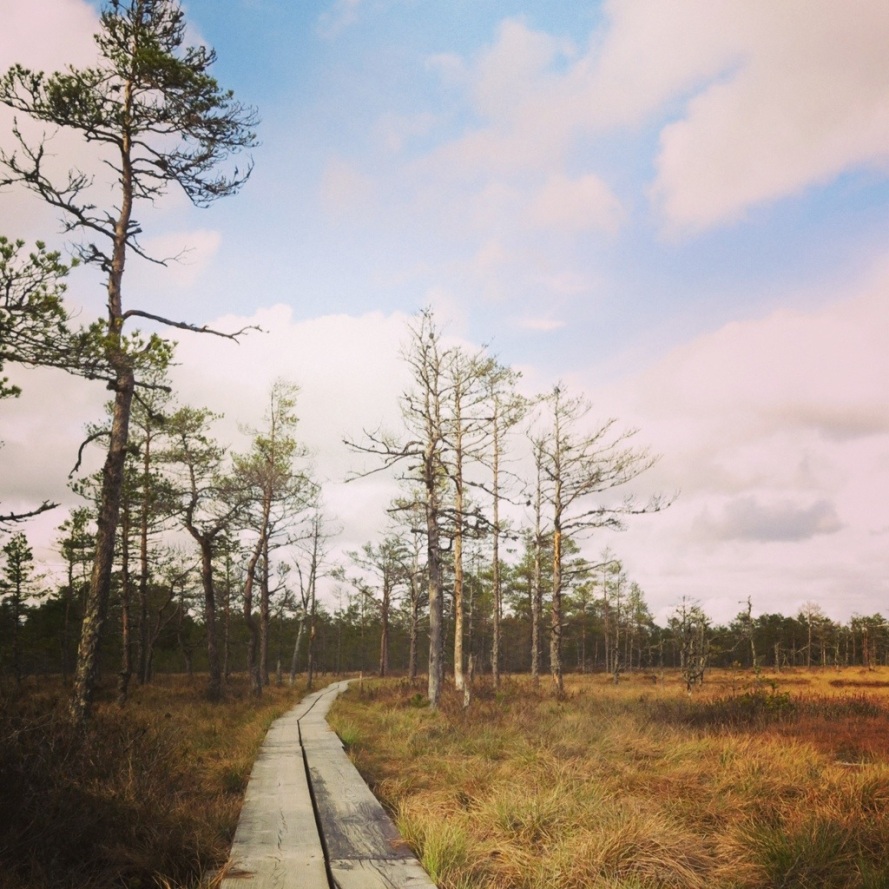 The trees here have this remarkable gradient to them, they start out brown and green at the root as they are covered with moss and lichen. As they rise, the bark turns red…it’s a lovely sight. 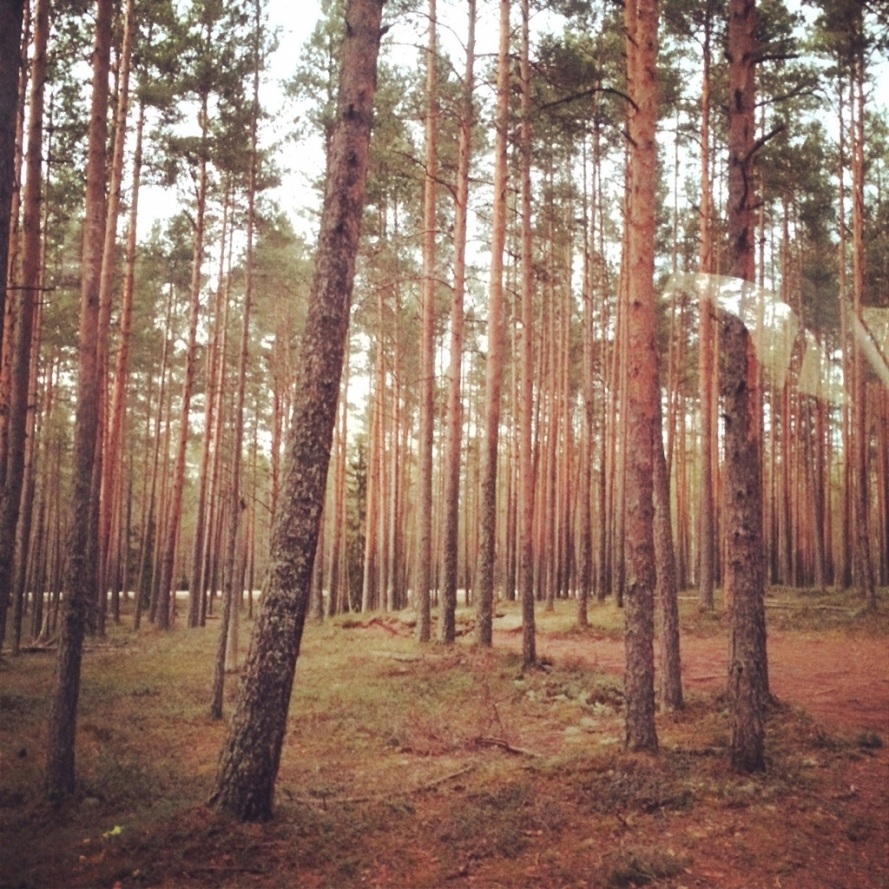 Our 9 hour day trip had come to an end and we drove back to Tallinn a little after 7 o’clock with another adventure under our belts.