Riga, Latvia – Up to HERE with Art Nouveau

I hated Riga when we got here. HATED. It could’ve had something to do with the fact that, after a 4.5 hour bus trip (in which John Levy violated the wifi data download limit in the first 5 minutes), all I wanted was to follow the ‘clear’ directions our Airbnb host had provided and lay down in a real bed. It wasn’t that easy.

We were ejected from the bus into a grotty station…a far cry from the glorious bus/train stations of Western Europe. Upon trying to get Latvian Lats out of 2 ATMs, we discovered that they had recently switched to Euros (thanks, guide book!) and then stood in front of the transit map for 5 minutes trying to figure out where the hell we were and where bus #40 stopped. The Riga transit map has the complexity of a Jackson Pollack painting. We were approched by an unsavory looking gentleman who offered us some help…he didn’t speak any English, unless 1 euro was exchanged. We denied his assistance and waited at several bus and tram stops until we found the one we were looking for. Google, Apple and Airbnb maps leads us in the wrong direction to the flat…I was close to throwing in the towel. Did I mention already that it was raining? Anyway, I was in a grandmaster funk all night…even pints and an overpriced shepherd’s pie in Old Town couldn’t lift my spirits.

What a difference the sun makes! On the docket for the next day was a walk around Old Town and the Art Nouveau district. Riga, inexplicably, has the largest collection of Old Noveau architecture in Europe, which we toured later in the afternoon. Also, there are lots of snail scuptures everywhere…a mystery which no amount of googling can solve for me.

After a good nights sleep, John prayed to the Laundry Gods in another attempt to understand a washer which is covered in unintelligible foreign instructions.

Around 1pm, we stepped into the sunshine and headed for St. Peter’s church in Old Town, which has terrific views of the city. The construction of St. Peter’s, a.k.a. the unluckiest church in the world, was first started in 1209, but bits were added on all the way through 1491.

Now you can climb to the top of the tower, which didn’t seem to be in peril while we were there, and see great views of Old Riga and beyond. 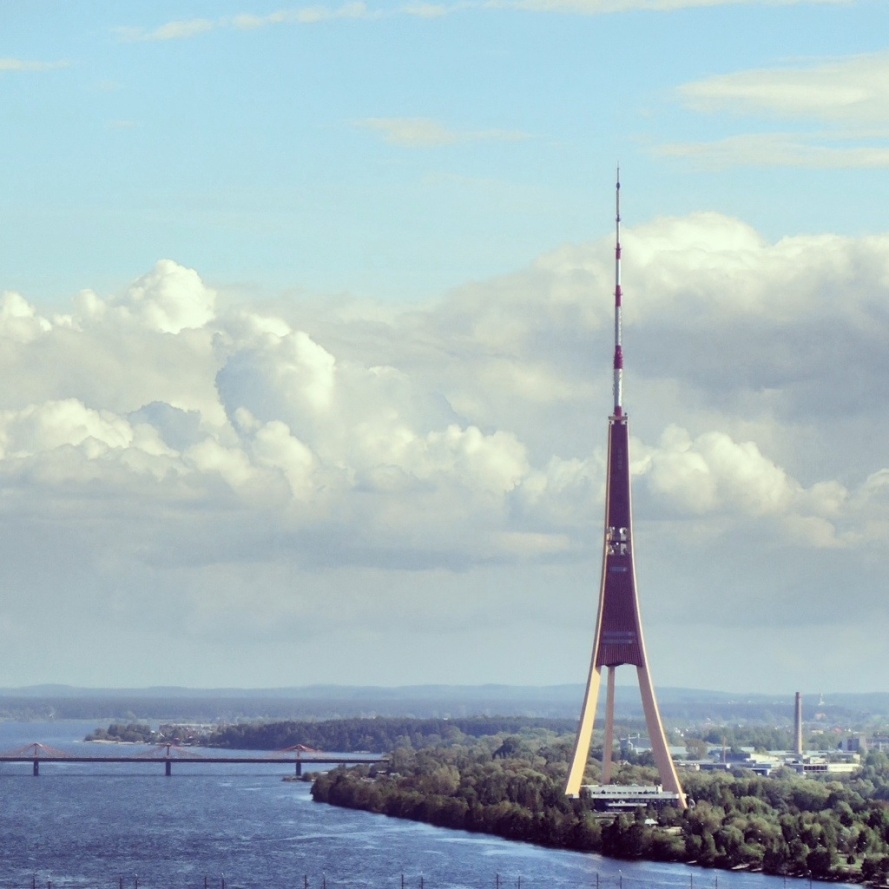 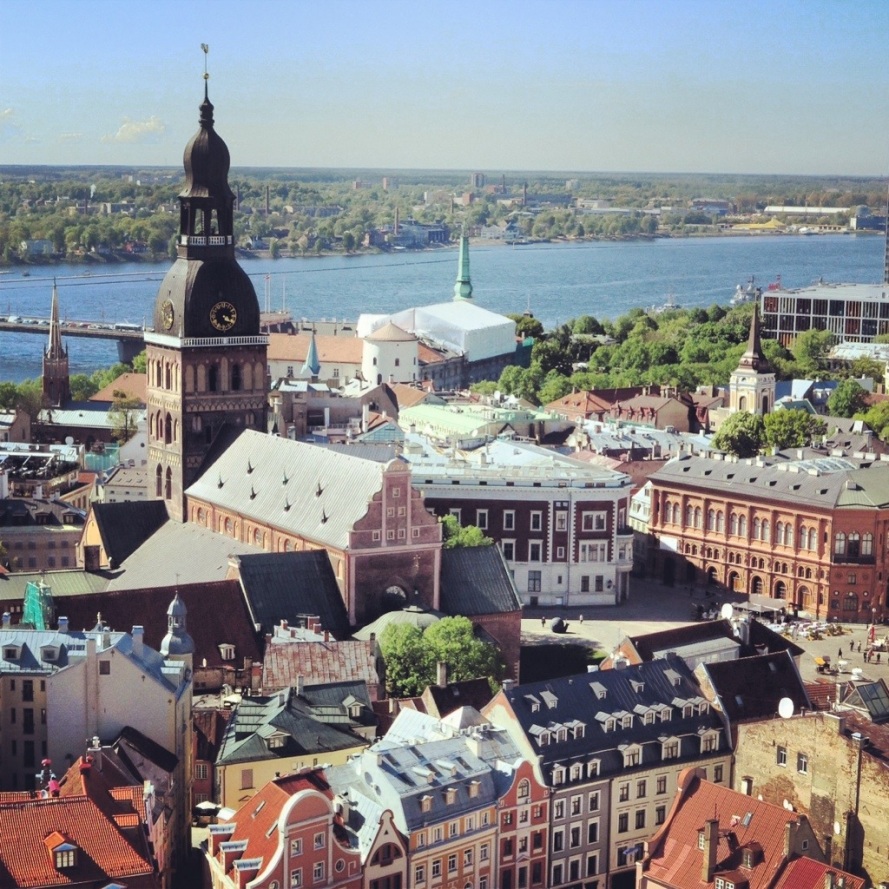 I took a photo from each side of the tower, hoping to stitch them into a righteous panorama…but the app I used spat out this result. It was much less trippy than it appears.

Our appetite for treacherous climbs sated, we stopped for a coffee outside the Blackheads’ House.

Built in 1344 as, essentially, a frat house for the Blackheads guild of unmarried German merchants, it too was partly destroyed in 1941, and flattened by the Soviets 7 years later. An exact replica was completed in 2001 from the original blueprints.

Nearby is the infamous “Cat House” 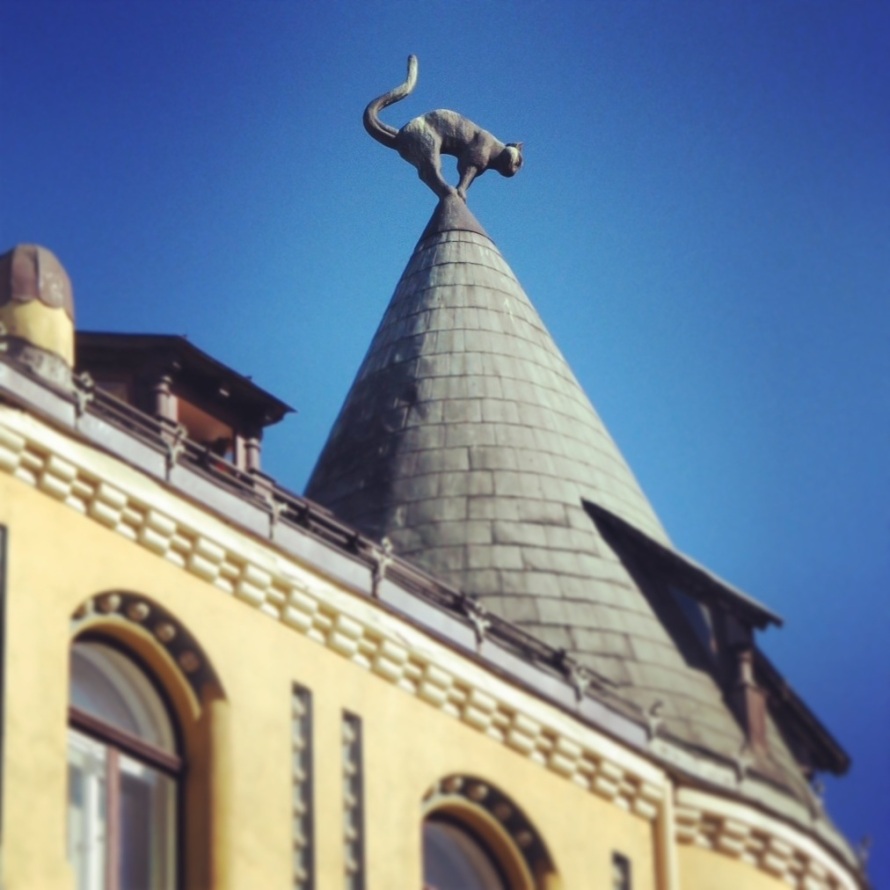 Legend has it that the original owner was rejected from the merchant guild across the street, and exacted revenge by placing a black cat on the top of the turret with it’s tail raised towards the Great Guild Hall. A court battle ensued, and he was eventually admitted into the guild as long as he turned the cat’s arse in the opposite direction.

Next we walked through the delightful central park, which separates Old Town with central Riga, towards the start our architecture tour. The park is full of canals, ice-cream women who don’t accept large bills, statues of dandies and random Japanese pagodas. 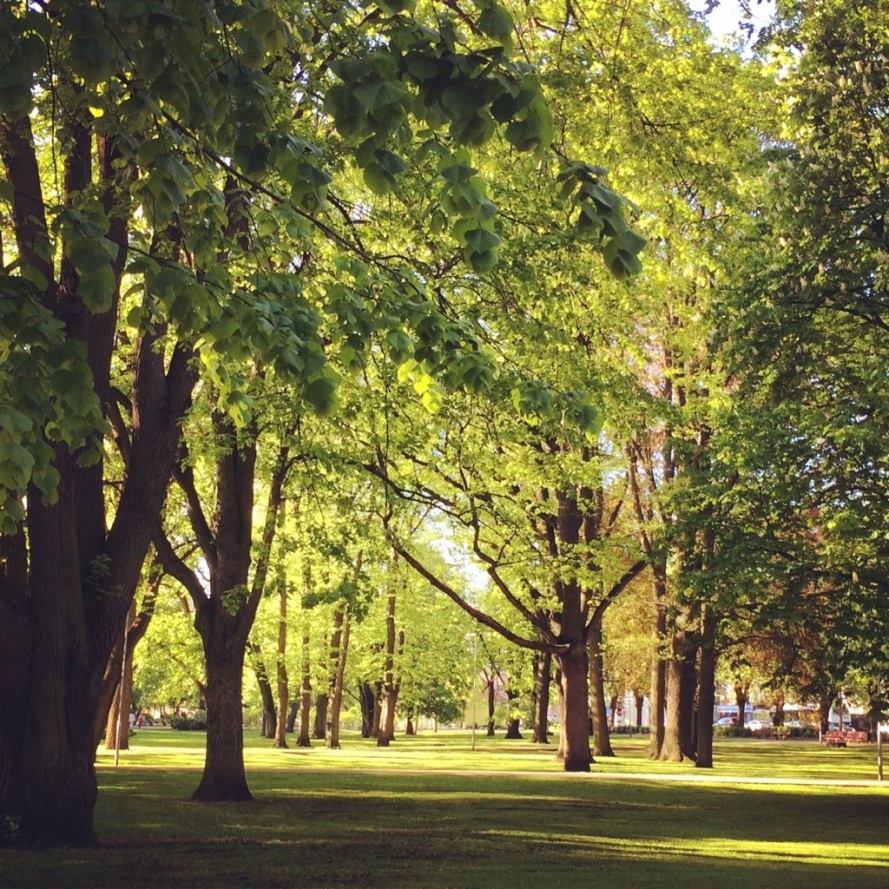 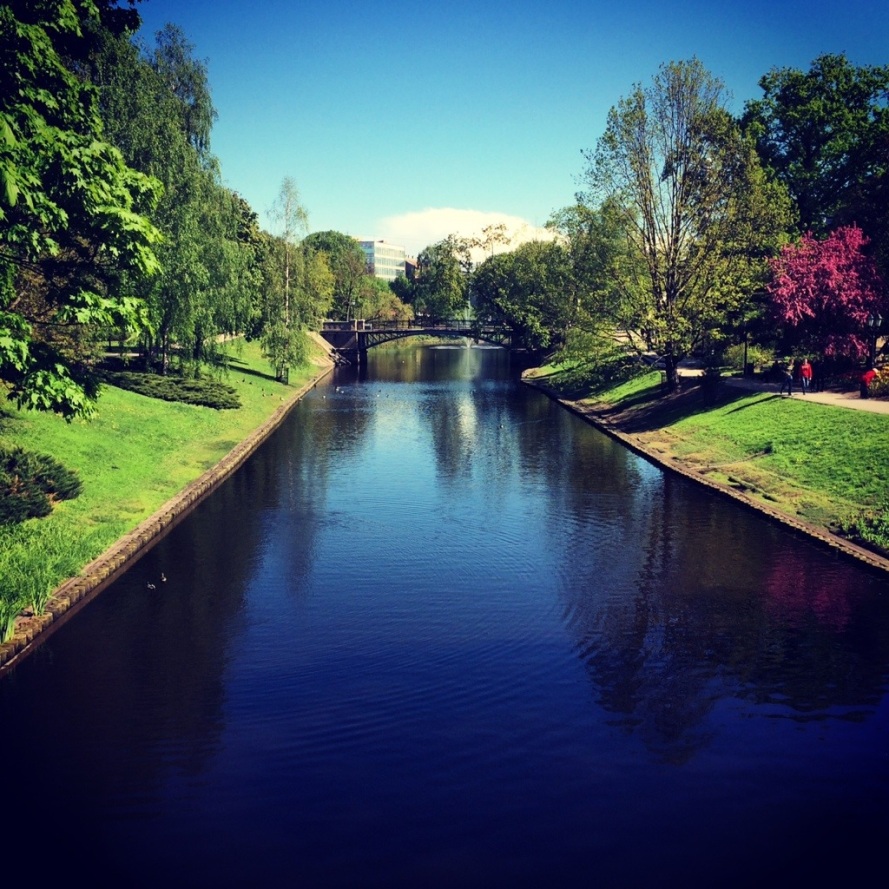 The main sight of the day was a walking tour through Riga’s art nouveau district, c/o my Lonely Planet guidebook. An astonishing 40% of buildings in central Riga belong to art nouveau, approximately 800 sites! Art nouveau emerged in Europe at the turn of the 20th century and incorporates a very ornamental style with symbols of nature, antiquity and mythology. Areas of Riga have been made an UNESCO World Heritage Site to protect the buildings from demolition. 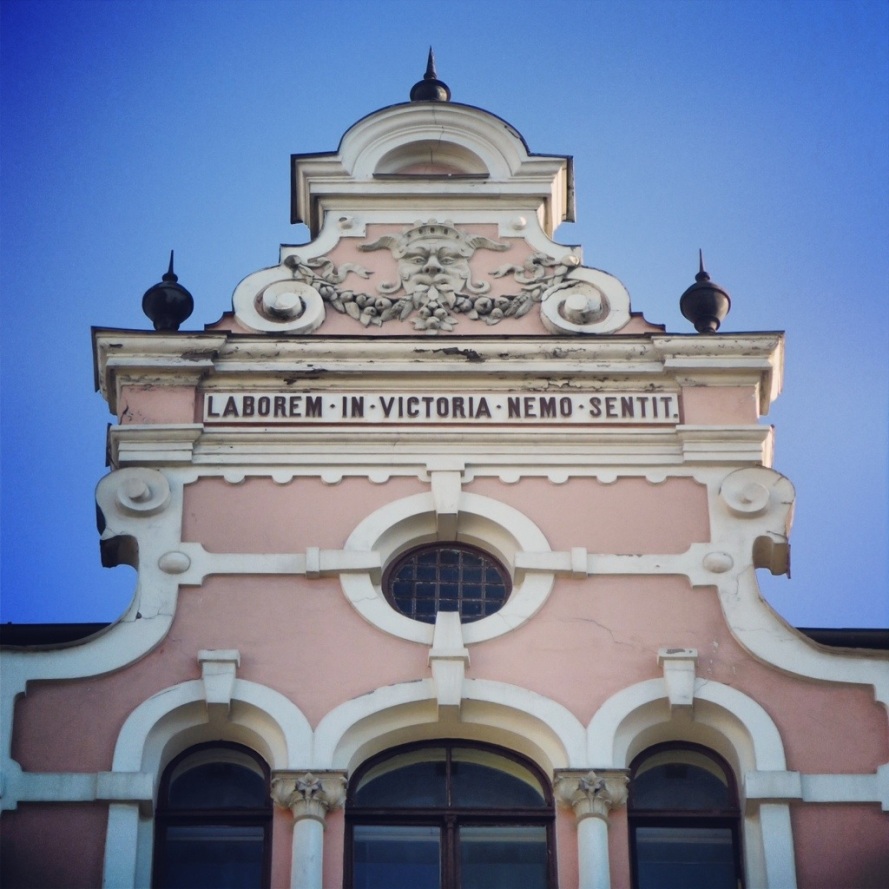 An amazing collection is concentrated on only a couple of Rigan streets, most of which were designed by a Russian architect by the name of Mikhail Eisenstein. Bare-breasted women, screaming heads, real and imaginary animals and gods adorn these beautiful buildings…which have been lovingly looked after, while some of their neighbors fall into disrepair. Here’s a rather large sample of my favorites. 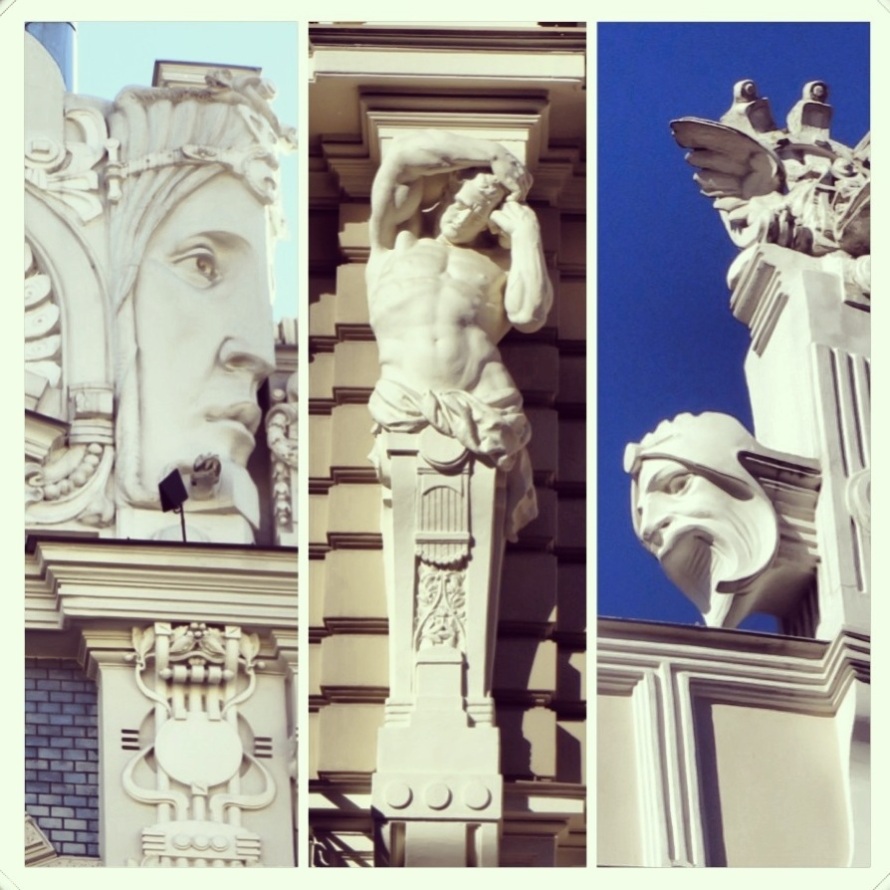 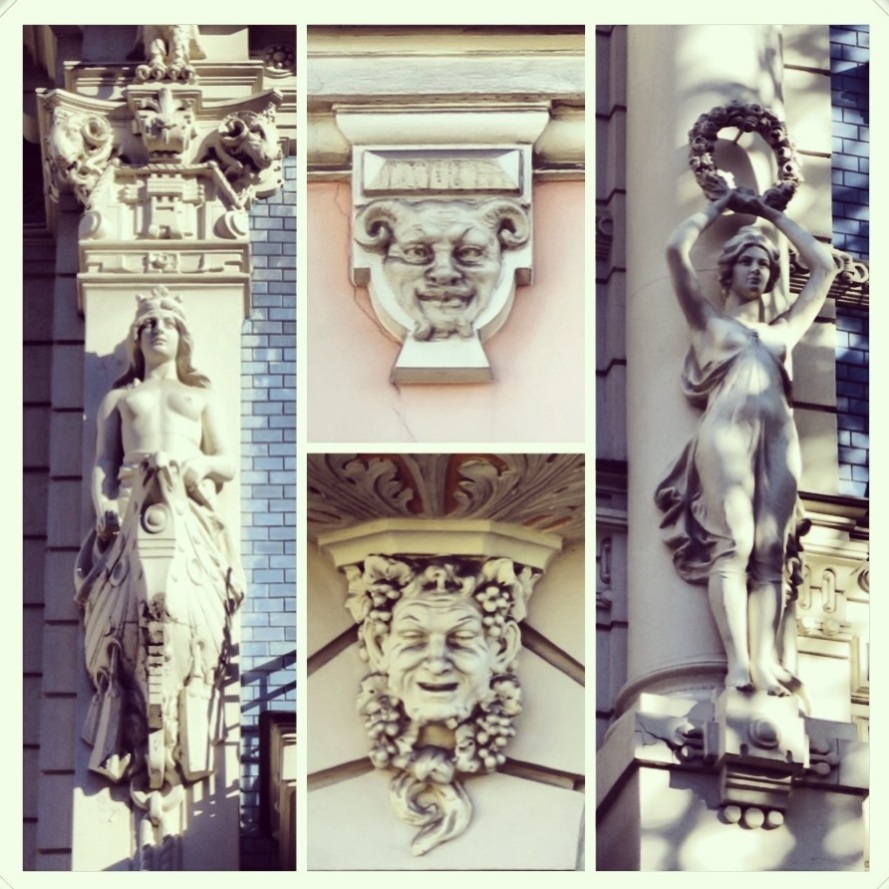 Our tour ended with the impressive Freedom Monument. She’s affectionately known as ‘Milda’, and she towers between Old Town and Central Riga. Paid for entirely by public donations, she was built in 1935 where a statue of Russian ruler Peter the Great once stood (zing!) 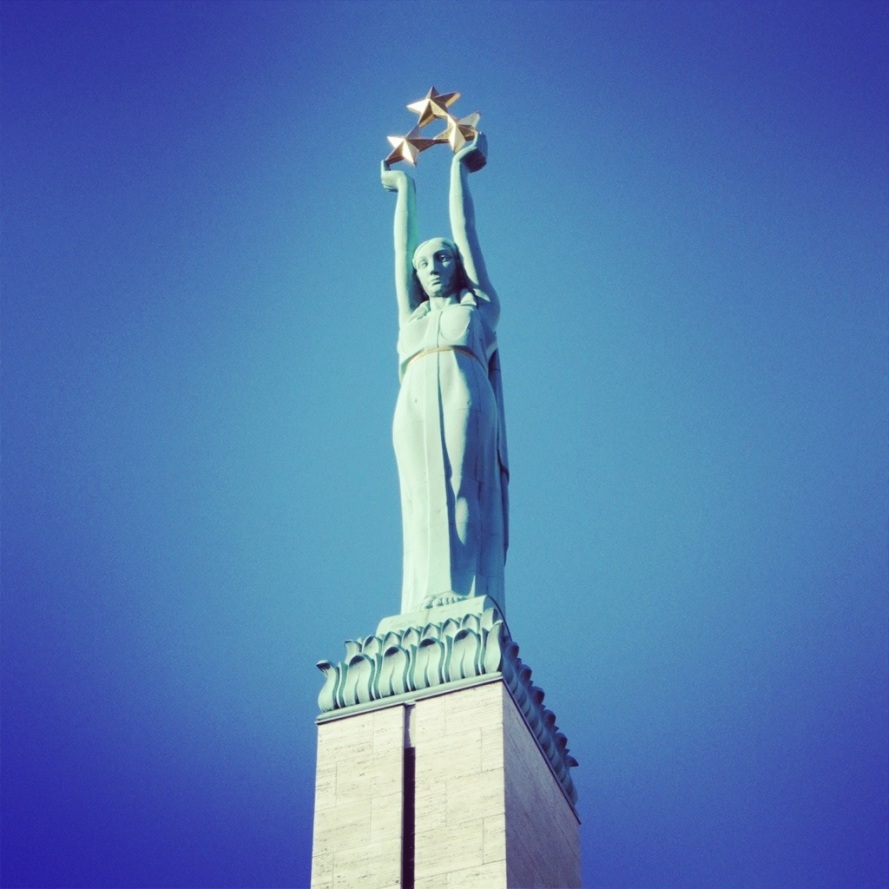 It’s surprising that the monument wasn’t torn down during Soviet occupation, but the Soviet’s reinterpreted the beautiful, star-toting women to be ‘Mother Russia’ caring for the three newest members of the Soviet Union (Estonia, Latvia and Lithuania) which were represented by the three gold stars Milda holds. In reality, these stars represent the three original regions of Latvia. Not to say they weren’t complete bastards about it though…anyone who was observed placing flowers at her base was shipped off to Siberia with all the other troublemakers. The Soviets also erected a huge statue of Lenin, facing the other way. It was removed when Latvia regained it’s independence.

We headed home to enjoy some mystery meat tacos. Since Cinco de Mayo, taco night has been a popular favorite, bringing the number of meals we can cook on our own to three (4 if you include eggs and bacon).