Howdy folks, this is our last post from Lithuania; tomorrow we head for the Czech Republic. Today’s write-up is part history lesson, part random thoughts. I hope you enjoy it.

The way that you say Thank You in Lithuanian is ačiū, which is pronounced AH-choo. That pronunciation, combined with my having developed a cold over the last couple of days, has led to the frequent occurrence of this exchange:

I have a couple of other random thoughts, if you will indulge me.

Fear the Balconies of Lithuania

The balconies of Lithuania are the sketchiest balconies that I have yet gazed upon. I wouldn’t feel safe standing on a single balcony that I have viewed since entering this country. I now make it a habit to check out the appearance of each and every balcony that I pass, just so I can experience an exception to my observation. Each one looks as if it is eroding, drooping menacingly, or about to separate itself completely from the building to which it is attached. The most modern balcony here appears to have been designed and implemented by a drunk child in 1937. I haven’t noticed this phenomenon in any of the other countries that we have visited, and I can’t imagine why all of the balconies look so flimsy here. The rest of the building looks fine. Maybe balconies are some sort of early warning system for hidden poor construction in other places. I caution you not to trust the balconies of Lithuania. You have been warned.

The Sun Is Always Shining

Something that I bet most Americans don’t think about too much is the latitudinal position of Europe. Suppose I told you that the southernmost part of Europe lies at approximately the same latitude as the US / Canada border? Did I just blow your mind?

If that blew your mind, sorry, because it’s not quite true. But it’s almost true. Check out this map that juxtaposes cities by latitude across the two continents.

One of the effects of this positioning is that we have so far on this trip been WAY NORTH of our usual Nashville latitude. We’ve been at Anchorage-latitude or above for the majority of our trip. And we have experienced Anchorage-like summer nights. Tonight, for example, in Vilnius, the sun set at 2130, and it will rise in a few short hours at 0457. We have many times on this trip started cooking dinner at 2100, just because our ole friend the Sun had been indicating to us that it was still afternoon. And I’ve awakened many mornings at 0500 with blinding sun blasting into the room.

We finally got psyched-up, and this afternoon we checked out the genocide museum in Vilnius. If some of what I write next sounds familiar, that’s because sadly, Estonia, Latvia, and Lithuania have all shared very similar experiences over the last 75 years, relative to being occupied by foreign powers. All three nations have a similar collective-consciousness and remembrance of the atrocities of their three separate occupations by Germany and Russia. Here’s a brief rundown of how it all went down in Lithuania.

The Germans and the Soviets secretly collaborated shortly prior to the initiation of fighting in World War II, and the contents of this collaboration contained an agreement on how to split up Europe…who got what…once the proverbial shite hit the proverbial fan. This agreement decided that Estonia, Latvia, and Lithuania would go Russia’s way. Poland was to be split. etc.

Once Germany made contact with Poland in ’39, it was on. Russia started stepping up the rhetoric with the three Eastern Baltic states, eventually coercing all three into permitting bloodless Soviet takeovers. They were bloodless in the sense that there was no open fighting at the onset of the takeover, but there was plenty of blood to go around as time went on.

In Lithuania, as in the others, the Soviets quickly established full control of the government, the police, the military. They worked to Russify the population, erasing local culture and identity, and supressing independent thought and dissent. As you might imagine, it wasn’t pretty. Dissenters and their families were rounded up and sent to Siberia in the middle of the night. And dissenters meant everything on the spectrum from open dissent to he’s the sort who might one day dissent. It was brutal, and the conditions where these folks were sent were awful. There was a high fatality rate just due to the living and working conditions.

As most of us know, the Soviet / German alliance did not last, and Germany turned on Russia, marching on St. Petersburg in 1941. Germany took Lithuania from the Soviets in 1941. Guess what? They were bastards too, adding Jew-killing to the list of atrocities faced by the populace. As a matter of fact, Lithuanian Jews were hit hardest of all three Baltic nations. Approximately 95% of the pre-war Jewish population was slaughtered during the three-year Nazi occupation.

After three years of German occupation and it’s attendant horrors, the Soviets re-took this area in 1944 and got back to their brand of awfulness: jailing and executing political dissidents, or shipping them off to remote parts of Russia as forced labor, probably to die in horrible working / living conditions.

Lithuanians organized rebellious guerrilla forces, and there were some great photos and stories in the museum about the activities of these freedom fighters. These folks lived in the woods, scavenged food, guns, and ammunition. Some weapons were supplied by retreating Germans who appreciated the cover. These resistance fighters fought bravely for about 9 years (1944-1953), before eventually they were all extinguished.

This museum lived up to it’s name. It is full of stories of heroism, but it is also full of photos and even videos showing the deaths of soldiers and civilians at the hands of German and Soviet occupation forces. The museum resides in the building that acted as both Nazi and KGB headquarters, and it contains a jail and an execution chamber. It is a sobering and thought-provoking place. 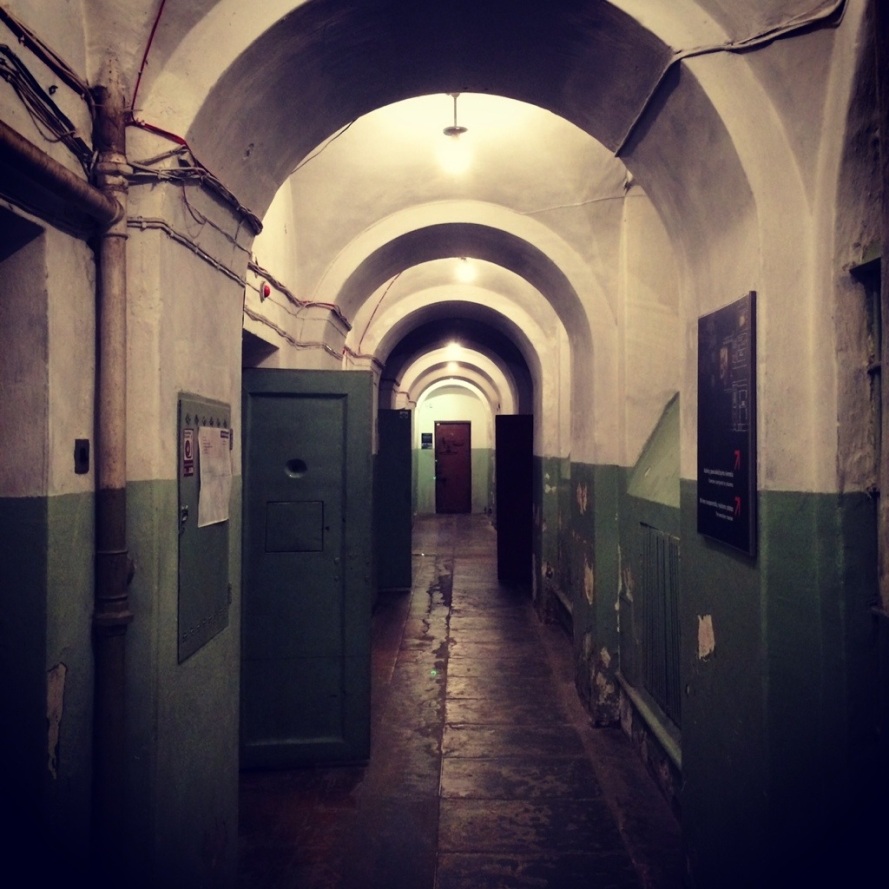 One of the things that is striking and that I think about when visiting such places is how people acting in groups can do such horrible things to other people. Atrocities are almost always perpetrated by groups; it’s the awful power and horrible influence of group-think. In one-on-one situations, very few people would have the inclination, and even fewer would be capable of, killing or dooming another person based on their race…or their beliefs, or their political inclinations. And yet as part of a collective, with people “acting on orders”, these horrors were perpetrated…over and over again…by thousands of German and Russians. And also by Lithuanians, who were co-opted into the process. I am not judging these specific people, but I am indicting the negative power of group-think. The negative power of “the mob” is a horrible thing.

I was glad for the lesson, as appalling as it is. It’s a reminder of how fortunate I am…and all of us are…to live where we live, to be allowed to do what we do. I can travel, I can write what I want, I can say what I want. I am free. And I am very thankful for that. It seems like the way things should be, and yet most of the world, for most of the time that there have been civilizations, has lived under far worse than conditions than all of us live today.

There was a segment of the museum dedicated to the KGB, and there was a good bit of attention payed to the KGB’s surveillance activities. The KGB was in the habit of monitoring all of the mail and telephone communications of the citizens of Lithuania (and other parts of the U.S.S.R.). They were looking for unscrupulous ideas and clues amongst this communication, in order to protect the ordinary citizens of the nation. Please be on the lookout for and beware any nation which would implement systematic monitoring of all of the communications of it’s citizens in order to protect them. Because that nation would be acting exactly in accordance with the actions of the KGB during some of the worst human-rights atrocities of modern times.

X-Men: Days of Future Past

We stumbled outta the museum and decided to go do something fun. What could be more fun than an X-Men film? Very little is the correct answer. We hiked the mile+ to the theater…that’s nuthin’ for hardened road warriors such as your humble narrators.

I don’t want to tell you too much, due to spoiler-related worries, but this film ties together characters from the original X-Men series with some of the folks from the First Class reboot, using a time-travel premise. Keeping the day thematically consistent, this film also deals with genocide. This film looks epic based on the previews, and it was very good. Not epic, but very good. We give it two thumbs up, very well done. Not quite as good as Captain America 2, which was truly great. The best scene occurs about halfway through the film, and introduces a new character called Quicksilver to the ole X-Men universe. Interestingly, Quicksilver is also going to be in the next Avenger’s film, and will be played by a different actor in that one. That’s too bad, because his bit in the X-Men flick is one of the funniest and most whimsical scenes that I’ve ever seen in an action movie, and certainly in an X-Men film. Hugh Jackman’s Oscar-winning bum also makes a surprise cameo.

Tomorrow: flying to the Czech Republic! Seeing my lad Alex!