Our Lithuanian flat was beginning to feel like home. We cooked a lot, we spent days doing nothing there…it was a very comfortable and relaxing week…not to mention stuffed full of rock ‘n’ roll. However, it was time to move on, so we bussed to the airport for a two-part flight to the Czech Republic. We have both been looking forward to Prague since we planned the initial itinerary, and as fate would have it, Alex (John’s youngest son) was waiting for us. Alex is doing a month long study abroad program and he has been in Prague for two weeks already…so we had a little bit of home waiting for us.

Our two part journey began with a flight into Warsaw, where we had two hours to kill before our next flight. 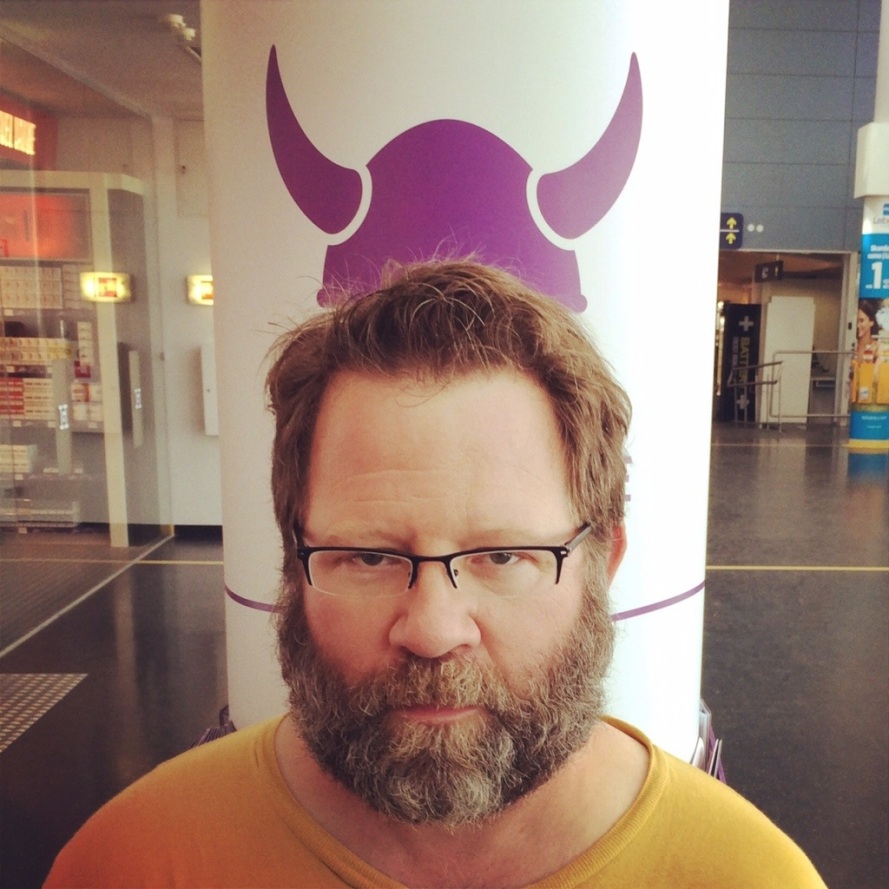 We made a couple of laps around the terminal and ate lunch in a bar called Business Shark. I’m not sure what got lost in translation there, but it was pretty good for airport food. We arrived in Prague around 8pm and were picked up from the airport by our Airbnb host. Immediately we could see that Prague was a beautiful place, albeit covered in graffiti. We sat back and watched the view from the back seat as Irenka drove us through streets lined with 5 story Baroque buildings. After a quick tour of the neighborhood (tram stop, grocery store and bars) we settled into our home for the next week.

Irenka recommended a bar right across the street called bukowski’s (after Chuck) which we decided to try. My exchange calculation app told us that our pitcher of beer was $3.24. Scoffing, I double checked the math, but it didn’t change. I think we are really going to like this town. Alex joined us as we were scraping the bottom of the first pitcher so we did the responsible thing and ordered a couple more. It was great to see Alex and we spent the night trading travel stories and observations back and forth. “Have you noticed that all the dogs have balls here?” “Has any grocery store cashier ever spoken to you without a snarl?

It’s become apparent that the folks that work at the grocery stores in Europe are the unhappiest people on the planet. You have to pay for bags here, so you put them on the conveyor belt with all your other purchases. The cashiers then fling them at you without a glance, so you have to be ready in shortstop position in the bagging area. I have always heard from foreigners that Americans have a reputation for being too friendly, insincere with their immediate familiarity and small talk. That has never been my impression of Americans. In England, it’s very common to make eye contact and say hello to a stranger as you pass in the street. That is friendly…and that sort of behavior would never fly in the States. I think what tourists that come to the States are experiencing is just good ole customer service for the first time in their lives. It’s not uncommon for entire transactions to take place without speaking, just a glare and point to the total on the screen. At first I thought it was because we are obviously tourists, so I started to watch the natives. As it turns out, they get exactly the same experience. Also, no-one understands the concept of queing up. People just cut in line here with no regards for how patiently you’ve been waiting your turn. I realize that I come from England, the world champion of Queing Up Politely, and I thought it was just the French that are complete crap at it…but it turns out that Europe, in general, doesn’t get it. Okay, bitch session over. All in all, it was great to catch up and there’s nothing to complain about 3 pitchers of beer for $11.

John’s been fighting a cold for a couple of days, so he’s been a bit wiped out. We left the flat around 1pm to wander around Prague until Alex finished up his assignments for the day. We are beginning to see the tourist crowds get bigger as we near the end of the shoulder season in Europe. There were lots of groups packed into Old Town Square. Our host had warned us about “picky pockys” so we kept a good grip on Angus and mainly stayed out of the throng. 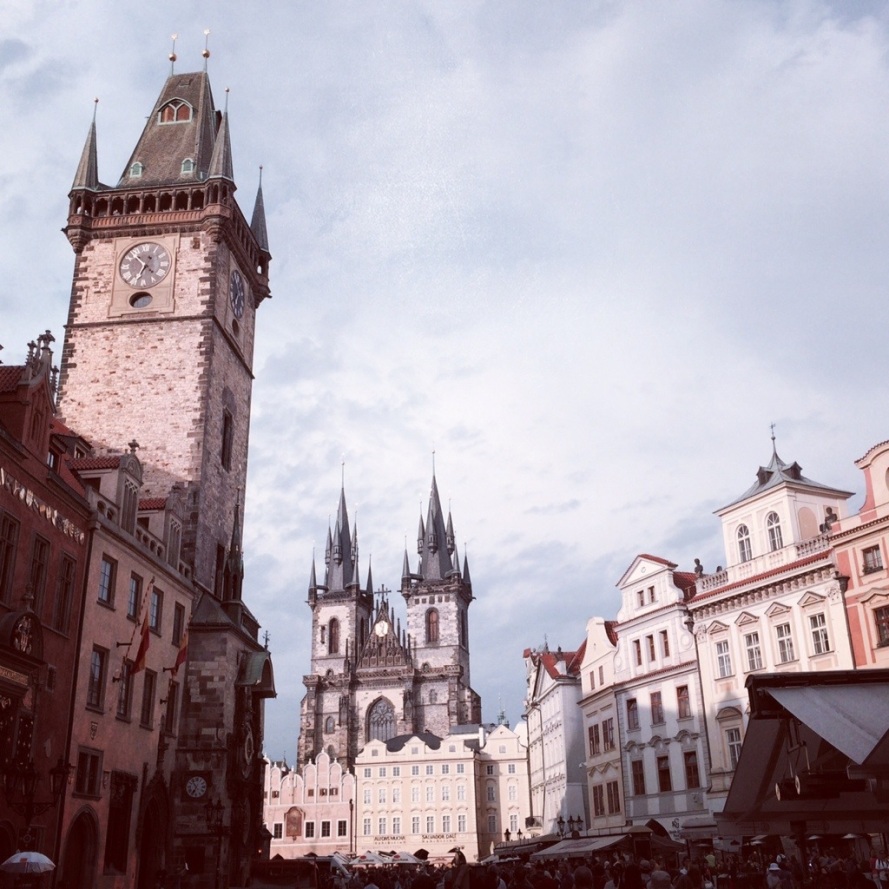 Seeing as most of our clothes were in the wash, and having mistaken the cool breeze flowing through windows as a sign of cooler weather, both John and I were a bit over dressed for the temperature. It was time to find some air-conditioning. Unfortunately, the nearest Cathedral was closed on Mondays, so we settled for an art gallery that had a Dali and Alfonso Mucha exhibit. The Dali exhibition was a 250 piece collection of various medium; ceramics, lithographs, sculptures and photographic portraits. One of my favorite paintings (thanks, Paul!) is The Sleeper. 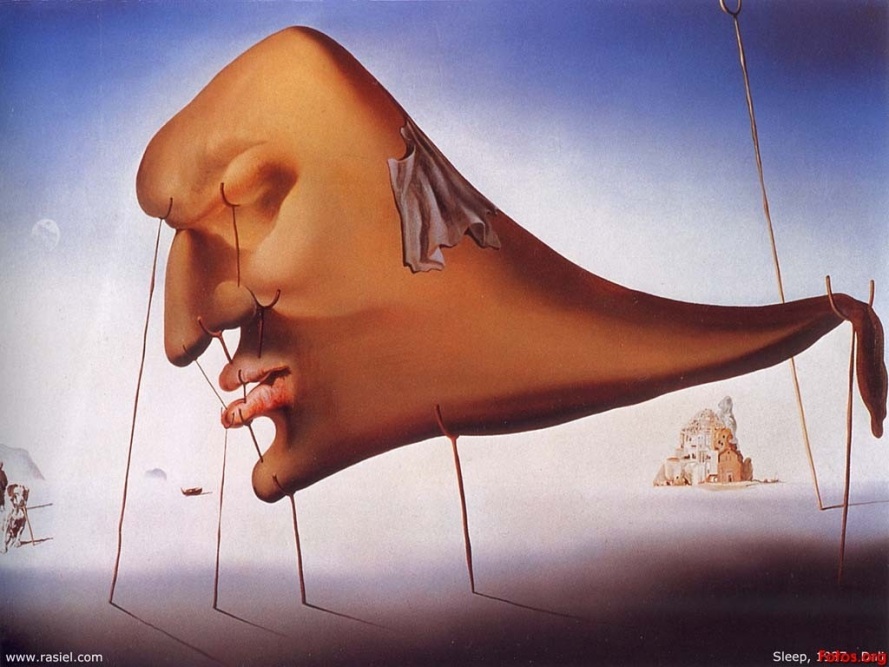 This work was not on display, but it was interesting to see the sleeper motif in some of his earlier sketches. The larger of the two exhibits was a collection of Alfons Mucha’s art. Mucha pretty much invented the decorative Art Nouveau style we all recognize. 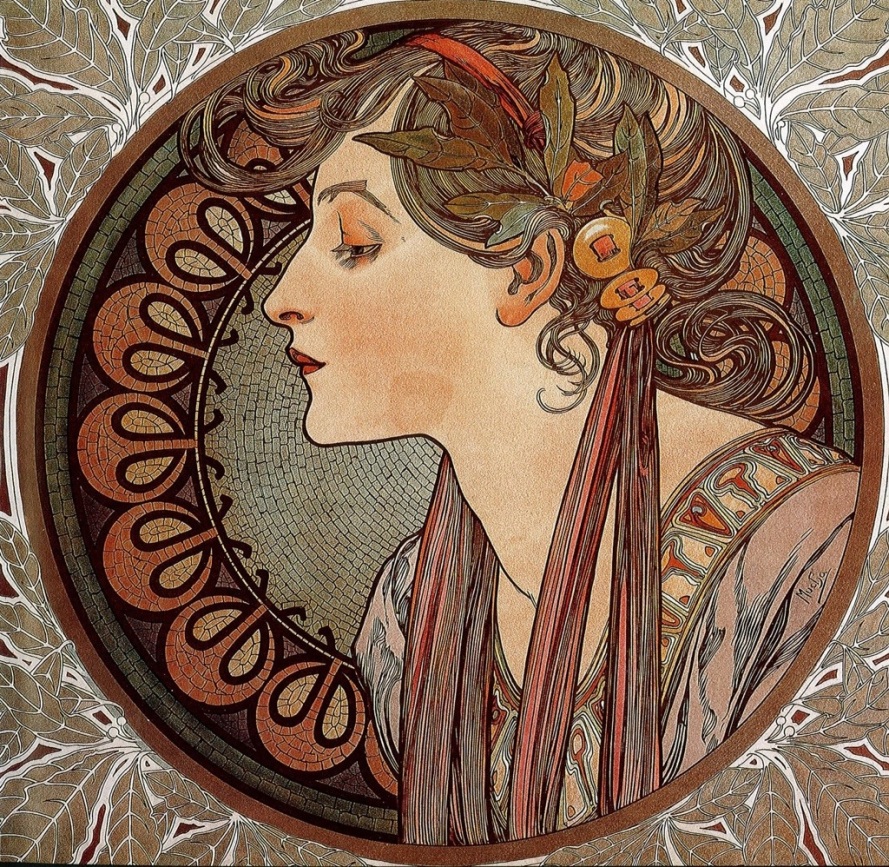 Mucha was born in what’s now known as the Czech Republic, but his career as a scene painter took off in Vienna in 1879. A fire destroyed the company he worked for in 1881, so he returned to his homeland to do freelance decorative and portrait painting. 7 years later, he moved to Paris, where his big break awaited him. The famous actress, Sarah Bernhardt, was unhappy with the posters for her latest play, Gismonda. It was a holiday weekend, so all the known draftsmen were out of town. As a last resort, the manager of the playhouse contacted Mucha and asked if he could throw something together. Bernhardt was so thrilled with the Gismonda poster that she began a six-year contract with him. 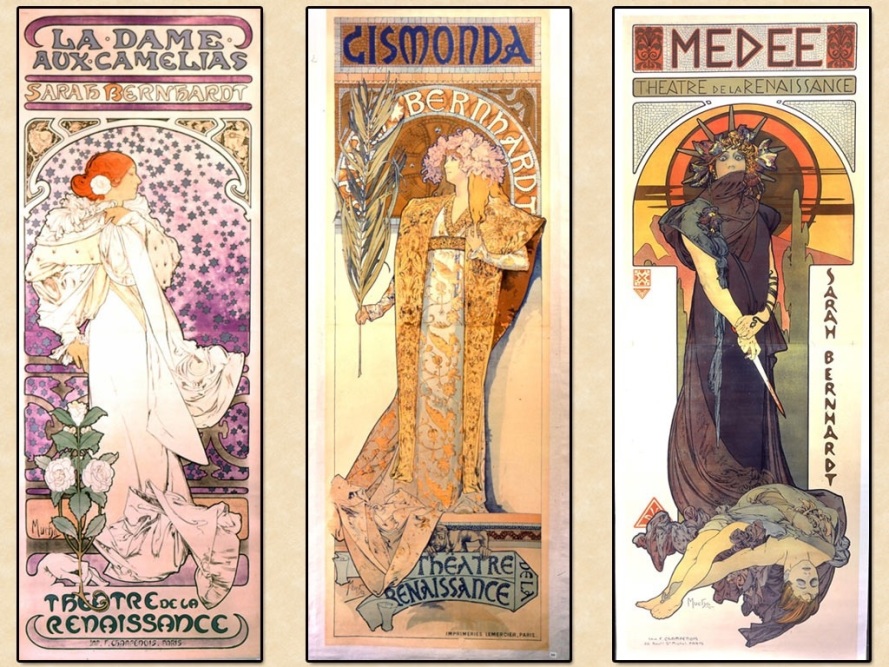 I collected stamps as a kid (nerd alert) and my very favorite ones were from Czechoslovakia; they were larger than the other stamps and so detailed…little works of art. Mucha designed a series of stamps, some of which were on display, and I am eager to find out whether I have any in my collection.

By the time we were done with the gallery, Alex was free to join us. On a whim, we boarded a boat for a tour along the Vltava River. The boat was covered, which provided great relief from the sun…plus, they served beer. 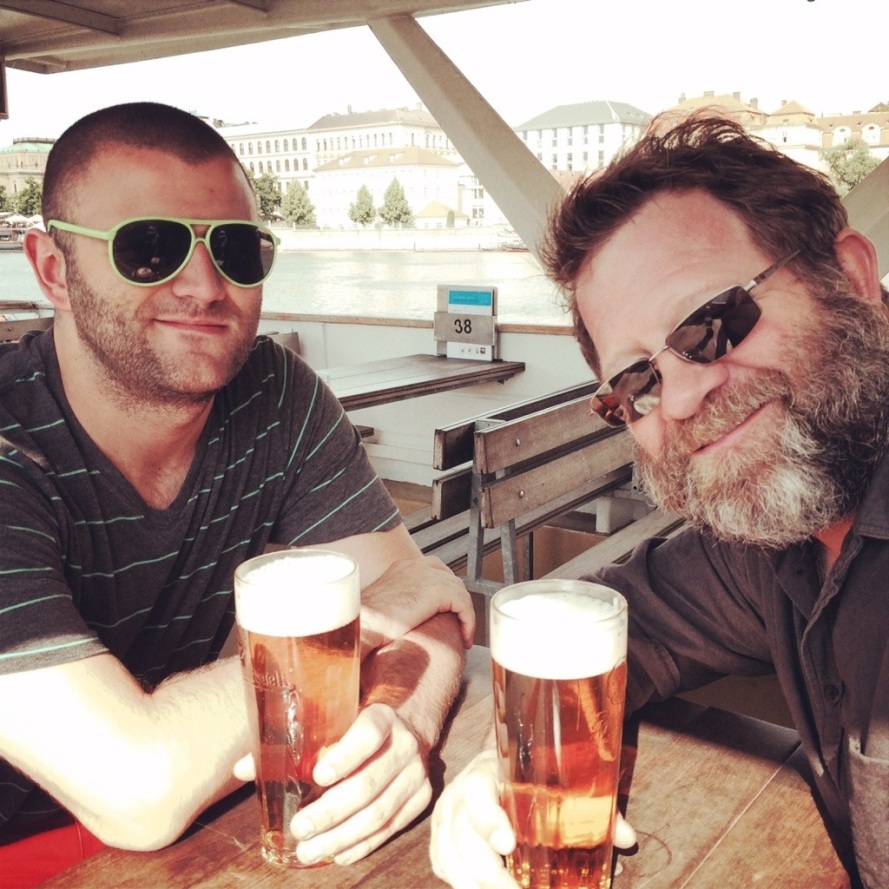 We cruised up and down the river and caught a glimpse of some of the sights we plan to visit later on in the week, such as the Prague Castle and St. Charles Bridge. 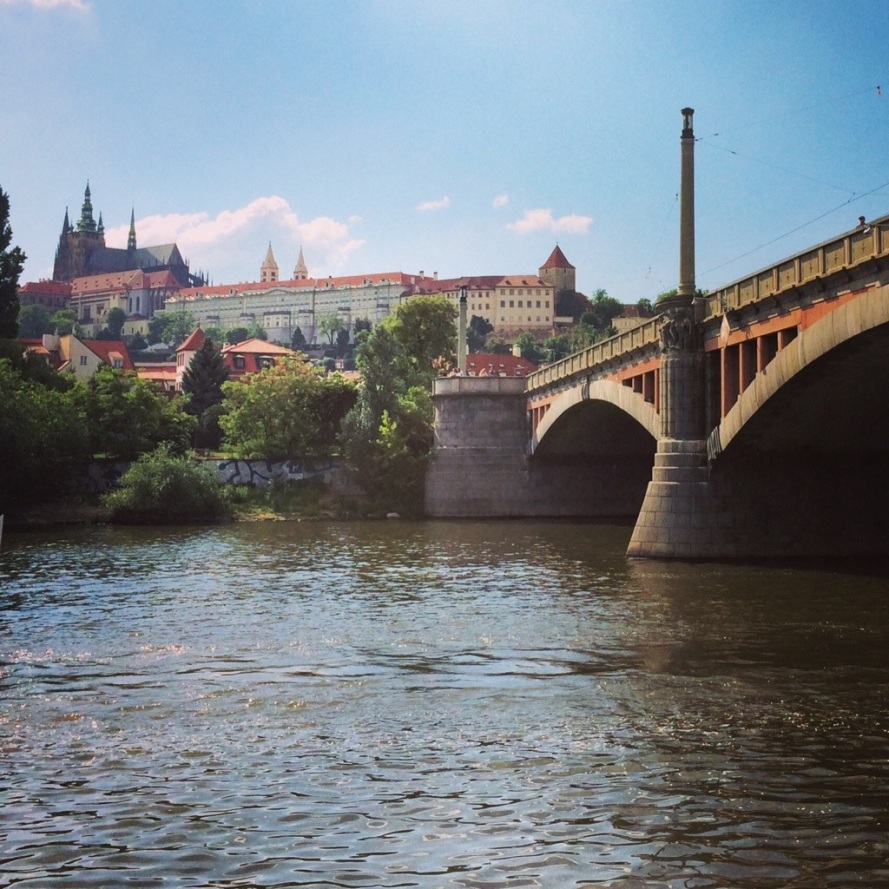 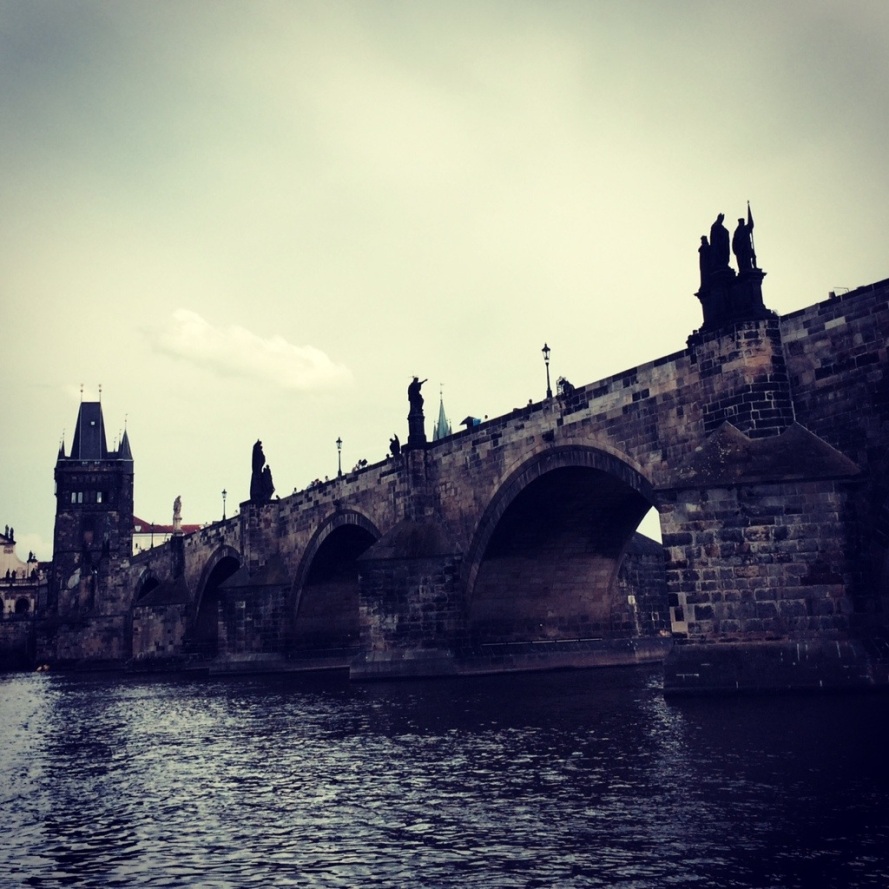 We’ve been lusting for Mexican food since we left Nashville but we hadn’t hit a city with a well reviewed one yet…until now! After the cruise, we hustled back to the Old Town Square and visited a cracking Mexican restaurant called Las Adellitas for dinner. We gorged ourselves on guacamole, salsa and burritos/tacos/nachos. We were all in post-food coma so we decided to part ways for the day and head back to our separate homes for a nap. As we pushed through the square, we realized that, for the first time that day, we were within minutes of witnessing the oft talked about chiming of the Astronomical Clock. 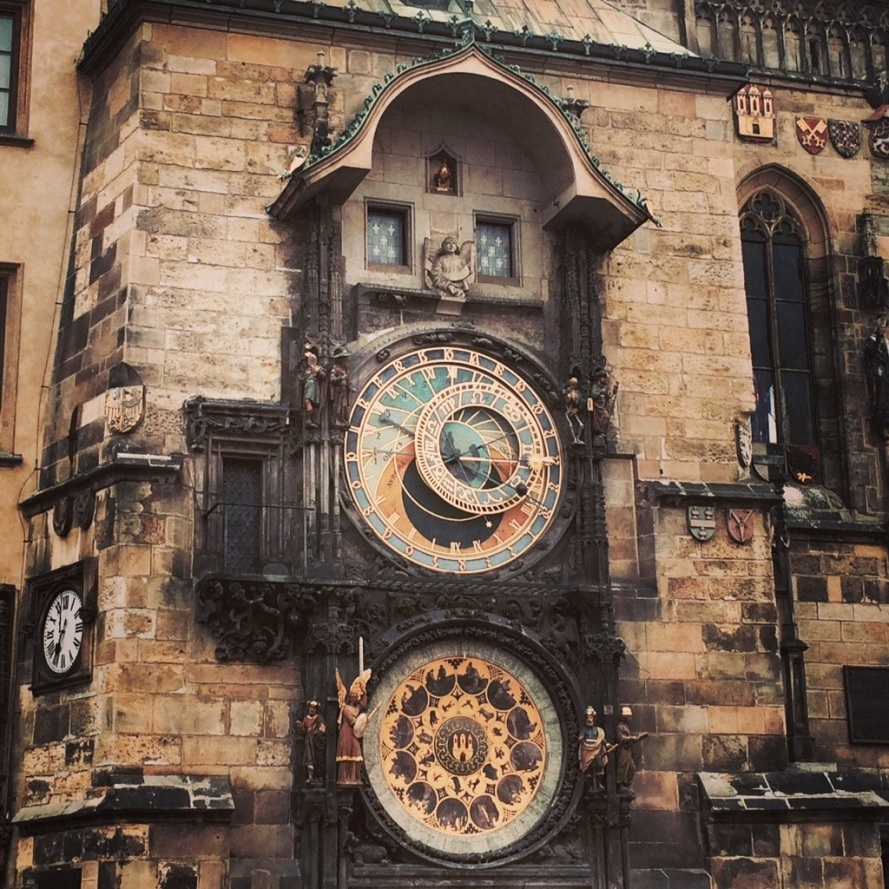 The clock was first installed in 1410, making it the third-oldest astronomical clock in the world and the oldest one still working! A skellington, representing Death, strikes the time every hour while a clockwork show called “the Walk of the Apostles” happens above him. This consists of wooden figures representing the 12 Apostles pass by open windows. There are three other figures that accompany Death; Vanity, represented by a figure admiring himself in a mirror. A miser holding a bag of gold and finally, a Turk, representing pleasure and entertainment. As Death rings his bell, the other figures shake their heads “no”. It’s a pretty fantastic clock, with a ring for the zodiac, an ring for the position of the sun on the ecliptic, 24 hr day ring and markers for 1/12 of the time between sunrise and sunset for the whole year. I plan to get a closer look at it during our stay as we were stuck in the back of the crowd for the hourly show.

Our job tonight is to figure out the rest of the Prague schedule, including a couple of day trips. There is so much to see here and so much beer to drink…we plan to make the most of it! 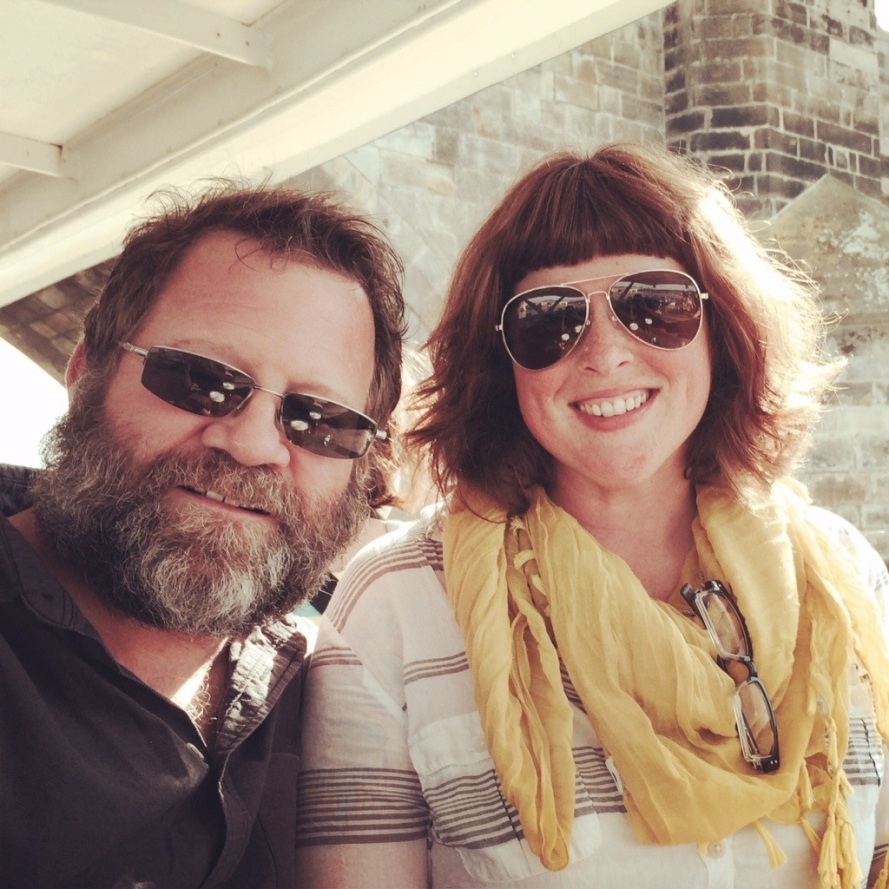