Prague – How To Overcome Communism in 40 Short Years

Today’s main attraction was the Museum of Communism in Prague.

The MoC presents a vivid account of Communism focusing on Czechoslovakia in general and on Prague in particular. A variety of fields are represented including: daily life, politics, history, sport, economics, education, the arts, media propaganda, the peoples’ militias, the secret police, censorship, judiciary and coercive institutions (including the Stalinist show-trials), and political labor camps.

The museum is simple but effective. Their are lots of Soviet-era artifacts to look at, and a fair bit of reading to do. It’s not a big place. The museum does an effective job of presenting the story in a linear fashion. They build effectively to the climax (the Velvet Revolution) before spitting you out into a gift shop full of humorous, tounge-in-cheek jabs at communism. There are many interesting, moving stories to tell. Here’s an attempt at two of those.

Frequent readers will note that we’ve been chattering at you about communist occupation for some time now. There is no need to rehash the entire tale; suffice it to say that Mother Russia had her hooks in Czechoslovakia following the country’s liberation from Nazis at the end of World War II, and by 1948 had completed a coup that brought the country fully under Soviet and Communist control. This was of course during the Stalin era, and thus brought with it all of the attendant evils of Stalin’s leadership: deportation, jail, and death for anyone that threatened or could threaten those in power. Under Stalin, the Soviets controlled the population via liberally-applied quantities of propaganda, social engineering, and terror. Starting in ’48, the Czechs got a full measure of all of the above.

A lot is said about the deportations, imprisonment, and executions. The Soviets were really into blatant propaganda and misinformation as well. For example, I read in the Museum of Communism the tale of an entire Czech olympic hockey team that was tried and jailed in 1949. Their crime? Being successful athletes prior to the arrival of Communism. They had to be discredited and erased in order to be replaced more easily by successful Communist-era Czech athletes. And they were.

A massive granite statue honoring Stalin was started in Prague around 1950. That was not unusual; statues of Stalin appeared all over Russia and other Soviet-controlled countries. The one in Prague was somewhat noteworthy however due to its enormous size; it was constructed to be 22 by 15.5 meters in size. The reason for the tremendous size is that the location selected was a hill that overlooks Prague, and due to it’s distance from its viewers, it was decided that the thing had to be gigantic.

I guess that in the monument design business, location is to design as chicken is to egg; nevertheless, the decision-making on this in hindsight seems a little backwards. Wouldn’t you first decide on an approximate size / design / budget, and then find a suitable location? In any case, it did not go down like that in Prague, and this absurdly giant monument to Stalin was built to suit the site, over a five+ year period, finally being unveiled in 1955. Stalin got croaked in ’53, so he never saw this elegant monstrosity.

This monument was derisively nicknamed “the queue for meat”.

The sculptor was Otakar Švec, who was so proud of it that he killed himself the day before the unveiling.

Even more entertaining was what happened next to this statue. Stalin’s successor as Soviet leader was Nikita Khrushchev, who knew and was open about what a complete bastard Stalin had been. It is believed by some conspiracy theorists that Stalin’s death due to stroke and stomach hemorrhage might have been facilitated by several, including Khrushchev. I don’t know about that, but it’s a fact that once he was in power, Nikita eased up a bit on the oppression, and decided to knock down a few of Stalin’s monuments.

In fact, the process of de-Stalinization began shortly after the unveiling of the monument in Prague. The monument became an increasing source of embarrassment to the Communist Party of Czechoslovakia, and was taken down decisively in 1962 with 800 kg of explosives and very little advance notice to the populace.

The Stalin monument was replaced with this metronome. It sits atop the (also) enormous plinth constructed to support the Stalin Monument. It symbolizes the long struggle over Soviet control.

Soviet tactics and the levels of oppression may have waxed and waned during their 40-year occupation of Czechoslovakia, but they were on the best day odious. The Czech people never stopped trying to throw off the bridle.

Through the 1970s and 1980s, the government’s emphasis on obedience, conformity, and the preservation of the status quo was challenged by individuals and organized groups aspiring to independent thinking and activity. Although only a few such activities could be deemed political by Western standards, the state viewed any independent action, no matter how innocuous, as a defiance of the party’s control over all aspects of Czechoslovak life. The government’s response to such activity was harassment, persecution, and, in some instances, imprisonment.

The selection of Mikhail Gorbachev to general secretary of the Communist Party in Russia in 1985 threw an odd wrench into things. Gorbachev instituted policies of perestroika (restructuring) and glasnost (openness), which were new for Soviet countries, and which caught the Czech government off guard. These policies were in direct conflict with the policies and behaviors of the Communist-installed Czechoslovakian government.

The Czech people, however, latched onto the new vibe rather quickly. Protests ramped up in frequency and attendance. It is noteworthy that protesters were nearly always peaceful. Although violence was frequently perpetrated by the state, the people understood that directly fighting state force is poor strategy, and they demonstrated the discipline to resist peacefully.

On November 17, 1989 (International Students’ Day), riot police suppressed a student demonstration in Prague. That event sparked a series of demonstrations from November 19 to late December. By November 20, the number of protesters assembled in Prague had grown from 200,000 the previous day to an estimated 500,000. A two-hour general strike involving all citizens of Czechoslovakia was held on November 27. On November 24, the entire top leadership of the Communist Party, including General Secretary Miloš Jakeš, resigned.

In response to the collapse of other Warsaw Pact governments and the increasing street protests, the Communist Party of Czechoslovakia announced on November 28 that it would relinquish power and dismantle the single-party state. Two days later, the legislature formally deleted the sections of the Constitution giving the Communists a monopoly of power. Barbed wire and other obstructions were removed from the border with West Germany and Austria in early December. On December 10, President Gustáv Husák appointed the first largely non-communist government in Czechoslovakia since 1948, and then he resigned. Alexander Dubček was elected speaker of the federal parliament on December 28 and Václav Havel the President of Czechoslovakia on December 29, 1989.

In June 1990, Czechoslovakia held its first democratic elections since 1946. 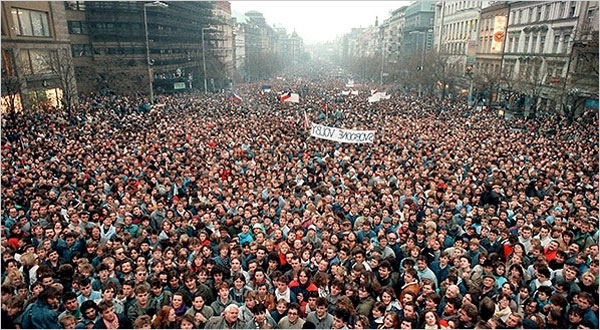 The visit to this simple museum was very moving. The story of the crushing oppression of Soviet rule, and the people peacefully but firmly overcoming their oppressors, is a tragic, beautiful, powerful, emotional story.

My friend Jeff H. said it well: borders and flags are secondary. Freedom should be every person’s country.

It isn’t all torture and liberation over here; the Czech’s have a sense of humor about it all, I suppose. Here are a few items we found in the gift shop.