It was a day of excess. There is no way around that cold, hard fact. After working to keep our spending / consumption footprint relatively small for most of the trip, we blew it out on Thursday in Prague. Here’s how it all went down.

The day’s main event was a meetup with my lad Alex, who was theoretically studying in Prague for the month of May. At least, that’s the way he explained it to me to get me to pay for the trip. He had just wrapped up his last school project, and Red Bex had discovered a semi-exotic tourist activity that involved our shooting a number of hard-to-access guns. That’s right folks, the three of us went to the shooting range!

One of the highlights is that I got to shoot a fully-automatic M16. I learned that it is not easy to aim one of those in full auto-mode; I sent rounds all over the place. You can send rounds downrange in a hurry, but getting them to a specific spot ain’t easy. About half my rounds hit my target, and the others went…elsewhere. I saw a few in an adjacent target. Perhaps my friend Max can get me up to speed on shooting this weapon.

Alex and Bex got their hands on all of these guns as well. Alex shot the hell out of a Czech Skorpion sub-machine gun, and also enjoyed some quality time with a WW II-era Mossberg bolt-action sniper rifle.

Bex flat tore it up. Her weapon of choice was a Dirty Harry-ish Smith and Wesson Magnum revolver. She put half her shots with that gun in a grouping no bigger than my fist, at a distance of 25 meters. For those of you that don’t shoot…that’s ridiculous shooting from a revolver. And…she won the overall shooting competition between the three of us. A good time was had by all. 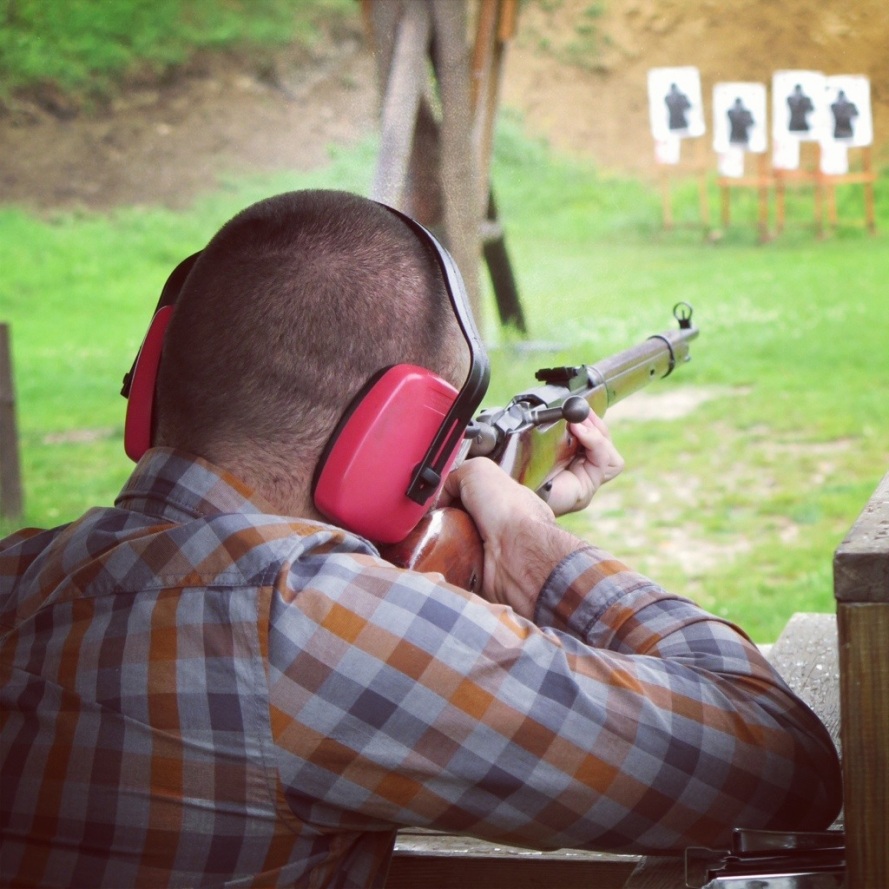 We rode back to the city, and parted ways with Alex, who was heading back to the US of A. He is now back safe and sound. Meanwhile, Bex and I foraged for dinner. We settled in for some local fare at a restaurant advertising native Czech food.

We were greeted by a seasoned vet of a waitress. Remember Flo from Alice? This was a Czech version of Flo. It was not her first night. After we ordered beers, she very urgently wanted to sell me an apéritif, and she eventually did. Becci’s comment after watching the interaction was “a sucker is born every minute”. The exchange went a little something like this:

It was a preposterous drink. It came in an immense glass, and was alight when it arrived, as promised. My order set off a chain reaction of flaming drinks in enormous glasses all over the restaurant. I think that was Flo’s plan all along. There’s a sucker born every minute!

Also consumed was a local delicacy called pork knee. It was delicious. I think the apéritif really set me up for it.

We stumbled outta there and enjoyed a nightcap in a place called the AnonymouS Bar. It’s a themed bar that has a menu like Patterson House but is decorated as if from the film V for Vendetta. It’s Guy Fawkes everywhere. I enjoyed a cold, boozy 5th of November. Bex was being a great sport, even though she was dragging at this point.

We grabbed a couple of hours of shuteye, and the next day it was off to the Bone Church in Kutná Hora (about an hour by train from Prague). 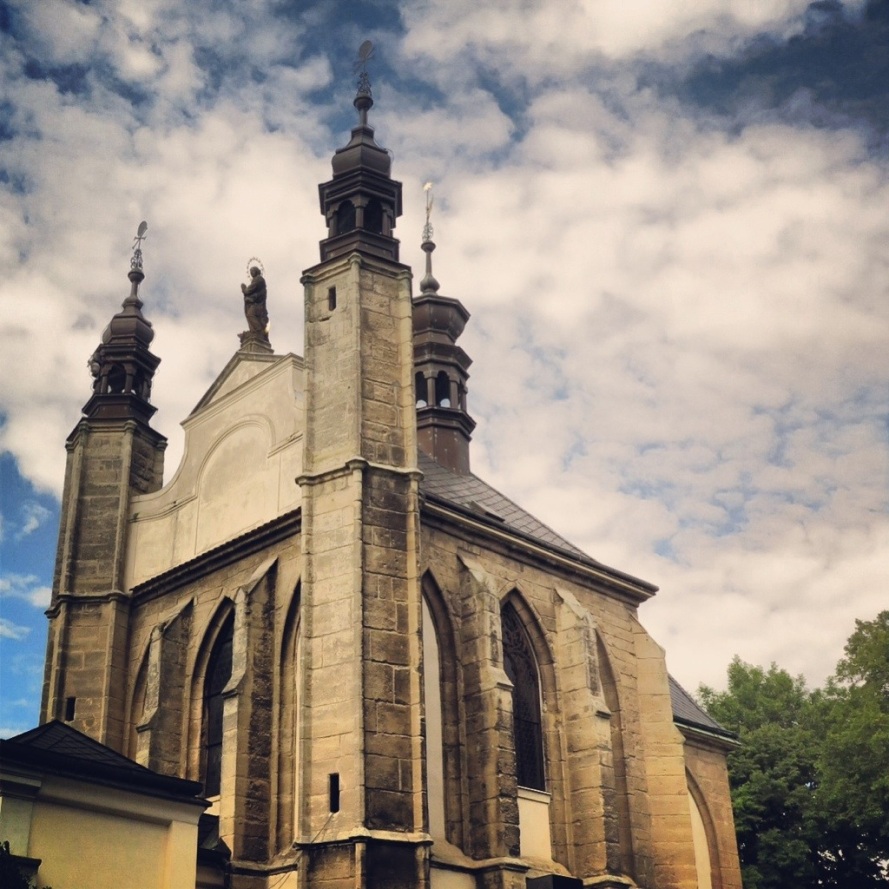 The Bone Church, occasionally referred to as the Sedlec Ossuary, is a small Roman Catholic chapel that contains the skeletons of between 40,000 and 70,000 people.

Four enormous bell-shaped mounds occupy the corners of the chapel. An enormous chandelier of bones, which contains at least one of every bone in the human body, hangs from the center of the nave with garlands of skulls draping the vault. Other works include piers and monstrances flanking the altar, a large Schwarzenberg coat of arms, and the signature of Rint (the main bone organizer), also executed in bone, on the wall near the entrance. 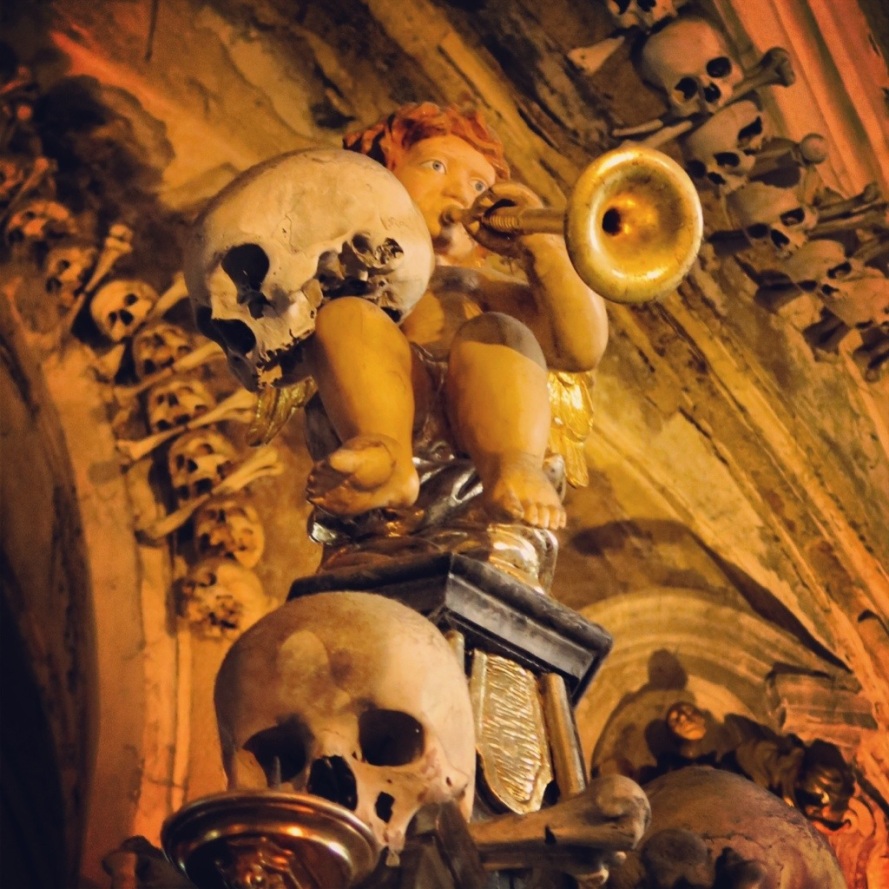 The place has a long history, originating around 1278. The whole bone-as-decoration business didn’t start until the 19th century, and seems to have started as the result of a monk stacking bones in heaps to get them organized. Say, that looks cool. Things took off dramatically from there, as you can see from the photos. 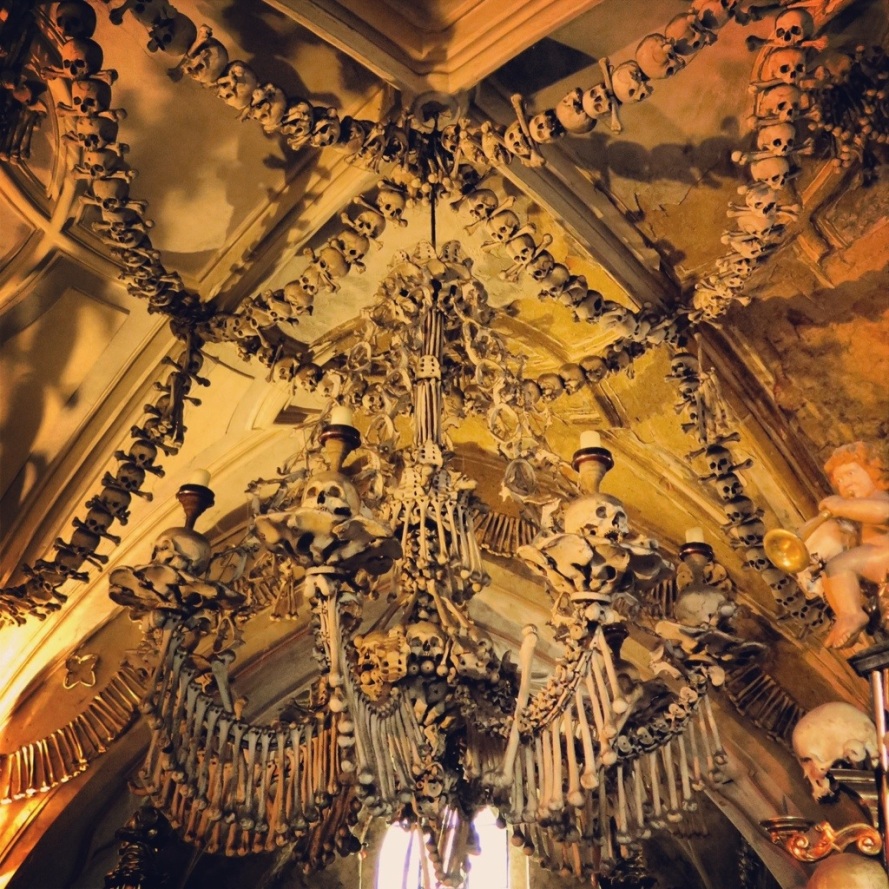 Those are real people-bones folks. I wouldn’t joke about a thing like that.

I have to say this is one the most macabre, odd, exotic, fascinating places I have ever been. The first time I ever saw photos of this place, I was stunned that it even exists. I felt the same way while seeing it in person. 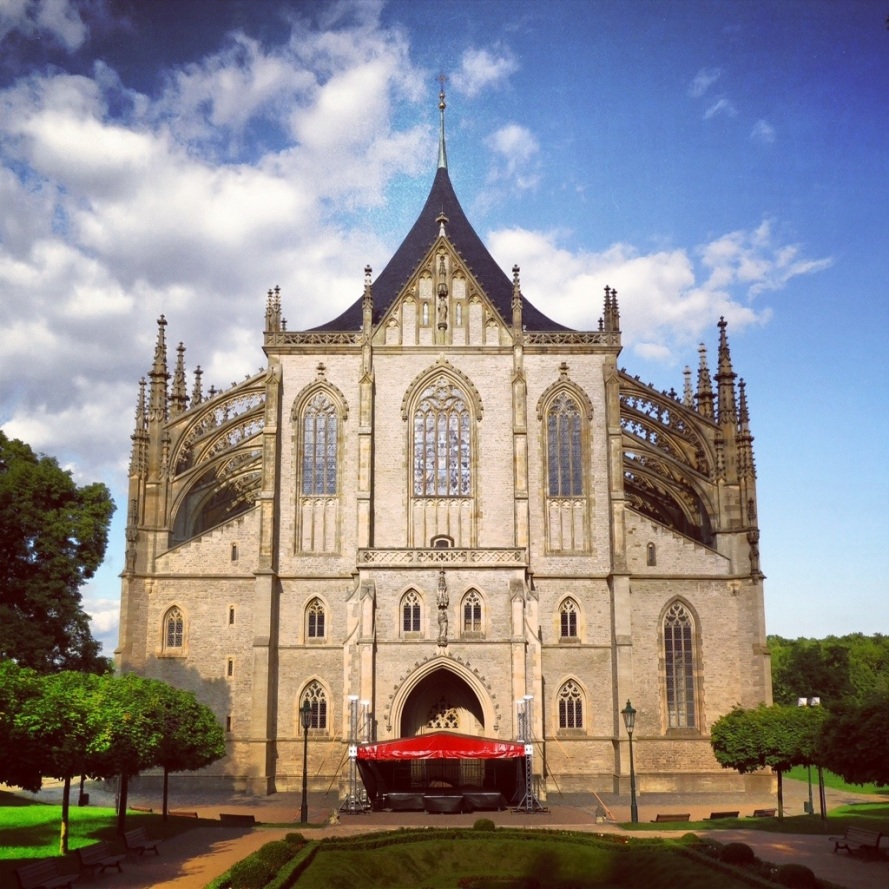 She being the patron saint of miners, and Kutná Hora having been founded primarily on the basis of a huge silver mining operation. Beautiful, etc.

With time to kill before our train back to Prague, we walked around this beautiful town. 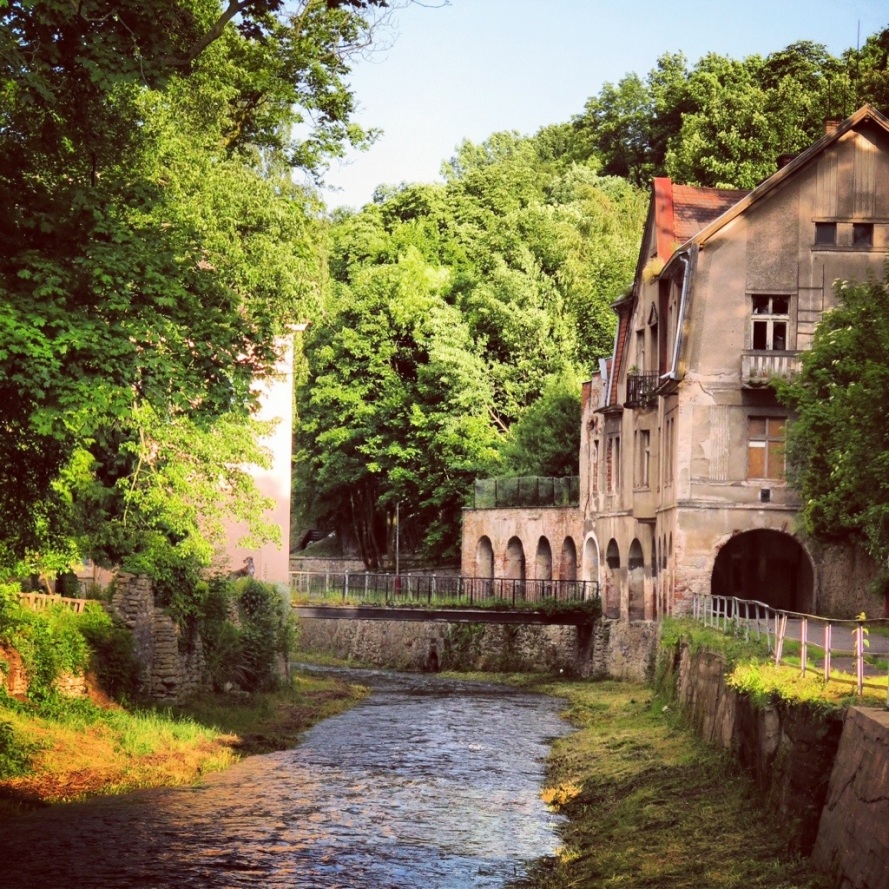 Along the way we managed to located a pub for a few pints. It is an underground dragon pub; alas it’s name has not retained in the ole permanent storage, but I think it was something like Dragon Pub. Entering this establishment required a walk down a long hallway off of the street, followed by a stairwell down from the street level for about two flights of stairs. It’s basically in a dungeon; the walls of the place were stone, and were covered with medieval weaponry, dragon imagery, and the occasional 80’s metal-band poster. 80’s and 90’s metal blasted from the stereo behind the bar, and the proprieter spoke no English. He appeared shocked that we were there. A few regulars were enjoying the vibe.

Have I mentioned how inexpensive it is to drink in the Czech Republic? These people are the absolute kings of beer drinking. Seriously, they are. Czech’s drink more beer per capita than anywhere else in the world, and I am doing my part to raise the bar while I’m here. Good beer is inexpensive here too. We drank liters of beer at the medieval dragon bar and our tab was around $8 when we left. You wanna drink some beer? Buy a ticket to Prague.

We finished off the day by getting on the wrong train back to Prague. Could be the downside of all of the beer, or maybe it’s a result of speaking no Czech. In any case, we missed the last train outta Kutná Hora, going the wrong way with a zig when we shoulda been zagging. This mishap was survived, and became another in a series of train adventures (there is a big one included in our next exciting episode). We wrangled a series of trains back to Prague, getting back late.

Next up: Away to Krakow!