You know those conversations you get into with your friends or partner: The old what’s the worst way to die? type discussions? It may be that John and I are a bit more macabre than you fine folks, but we’ve had that specific one a lot. I think we are in agreement that the worst way we can think of is inside the Brazen Bull. Coincidentally, we learned about this beauty on a show called 100 Horrible Ways To Die, or some such nonsense, on SpikeTV.

The Brazen Bull was a torture and execution device invented in ancient Greece. Perillos of Athens was the clever chappie who came up with the idea (and probably a fun-loving guy to hang around with) and his plans were reviewed and approved by the tyrant leader of the time. The Brazen Bull is made entirely of bronze, hollow, with a door in one side. It was full-bull sized and came fitted with an acoustic apparatus that turned the sound of screams into sounds a bull would make. “Why?” you might ask, “would you need a device to turn screams into bull noises?” Well, it just so happens that they planned to lock people inside that bull, set a fire underneath it, heating the prison until the person inside roasts to death. I tell ya, those Greeks…a barrel of laughs or, on second thought, a bull full of screams.

Legend has it that upon gleefully presenting the final product to the tyrant, Perillos was asked if he minded giving a demonstration. Eager to show off his invention, he agreed. Moments later, he was stuffed into the bull and roasted to death…so, it all worked out in the end.

Why, dear readers, am I telling you about the Brazen Bull? Well, we had the pleasure of riding the Brazen Bull Express train for 7.5 hours from Poland to Austria. There were only 2 differences: The first was that we managed to escape with our lives, although there were times that we probably considered a mercy killing. The heat does crazy things to your mind…your temper-o-meter rockets up while your patience goes out the window…or would, if you could get the bloody window open. I think the only reason we didn’t slaughter each other was that we were united in spite towards difference number 2. The second difference was that whoever wanted to torture us was impatient, and threw another guy in there with us. His crime? Public Drunken-ness and 7 counts of not bathing in a couple of weeks. He was the smelliest person I have ever come across.

He was a young guy and he had a ton of cash in his wallet, so I can only assume he had come from a place full of ample opportunities to have a good wash. His outfit could only be considered acceptable if he was on his way to compete in the the Tour de France. His teeth were like the “It’s” guy from Monty Python, and he had a hairdo reminiscent of the Scarecrow in The Wizard of Oz, weird hat included. His luggage included a big backpack and two large coolers strapped together on wheels, which made moving around our little compartment of hell really easy. I shudder to think what was in those coolers.

The most incredible thing about this gentleman was that he was either completely unaware of his offensive collective appearance…or he just didn’t give a damn. He was bristling self-confidence and hit on every girl that made the mistake of choosing our compartment. I have never witnessed such a full-on display of attempted courtship. The reading of palms was involved. One victim realized her mistake and left…the next got sucked in and was captured for about 2 hours until she finally started edging away from him, pretending to read a magazine.

The compartment was advertised as air-conditioned, and there was about an hour that was cool and pleasant. Chilled air puffed its way out of a little vent by the window until we passed through Krakow again, then it went downhill in a hurry. At one point the digital read-out in the corridor of the train read 42C. The window in our compartment was locked shut. We tried various combinations of door open, door closed, curtains drawn, curtains open. When we realized nothing could be done, we rolled up our pants and sat in our own wet skin and sweat. Of course, every new person who entered the carriage did the same thing…which we watched in grim silence. After several people went out to scout the situation the other compartments, it was determined that we needed a special key to open the window. An hour later, a conductor passed through and saved our lives. The window was opened about 3 inches and we relished every hot breath of air it let in. About 45 minutes later, our drunken Austrian friend discovered the air conditioning controls (which someone had obviously installed as a joke) and decided that we should shut the window and the door and let the vent do it’s job. He was intercepted at the window by both John and I, and he’s lucky he didn’t draw back a stump.

We finally arrived in Vienna, and after 15 minutes of wandering around trying to find our bus connection, we arrived at our host apartment. We are staying with two delightful and friendly hosts, Heinz and Ming, and their two adorable dogs, Spannocchi and Lui (short for Luigi). After a large cup of tea, we unglued ourselves from our clothes, set the fan on high and collapsed into bed.

The next morning, Heinz dropped us off in the center of town and we started exploring Vienna. It’s a beautiful town full of exquisite architecture. Everywhere direction you look there is a glorious park, a towering church or ornate museum. The scale of it is quite overwhelming. 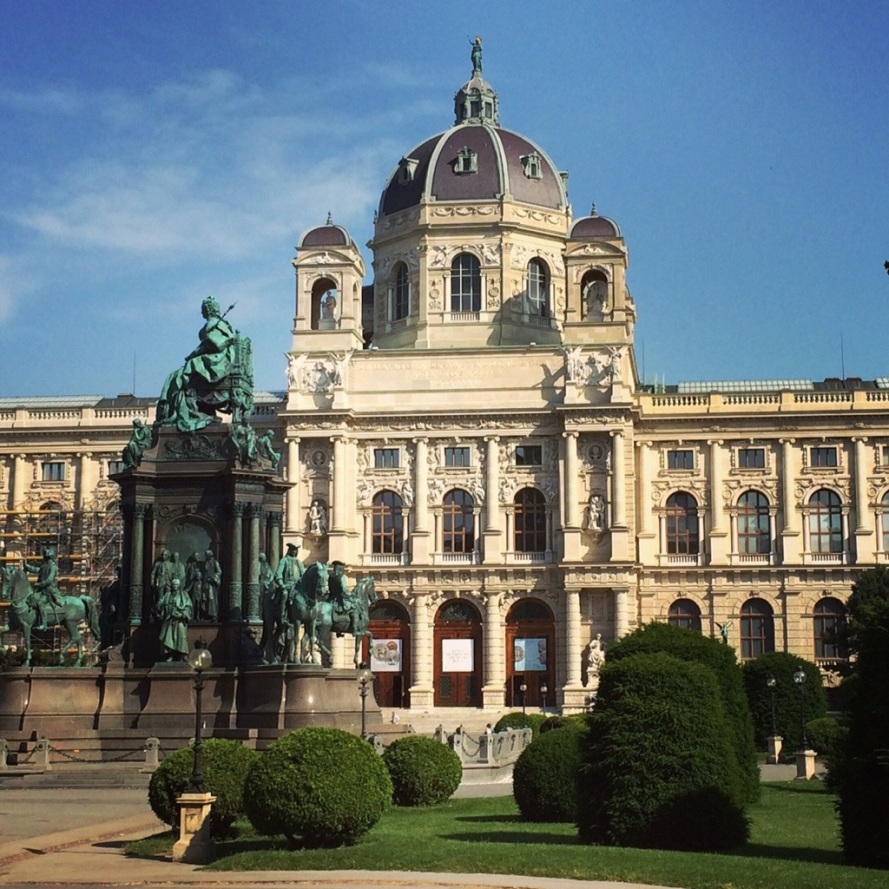 The temperature was around 90F, hotter than Nashville. As our Tennessee friends are aware, Bonnaroo is this weekend, and this will be the first time in 5 years that John and I will not be attending (it will be 7 years for John). For those that don’t know what Bonnaroo is, it’s a huge outdoor music-festival held on a farm about 60 miles away from Nashville. For 4 days you set up camp and slog through the Tennessee summer heat and listen to some great bands. Elton John is headlining this year, and we are sad to miss our yearly pilgrimage to Manchester, TN. It’s always awfully hot and we usually take shelter at our camp compound, in the shade and surrounded by fans until 3:30pm, after which we venture out into the hot sun. The universe is obviously trying to set things right and bring Bonnaroo conditions to us in Europe. The temperatures in Vienna are actually a little higher than the forecast for ‘Roo this year. Everywhere we looked, we saw ‘Roovian stuff: Water stations, spritzing tents, complete lack of air conditioning etc. It’s a trip!

Seeking refuge from the heat, we entered St. Stephen’s Cathedral, which towers above Stephansplatz. 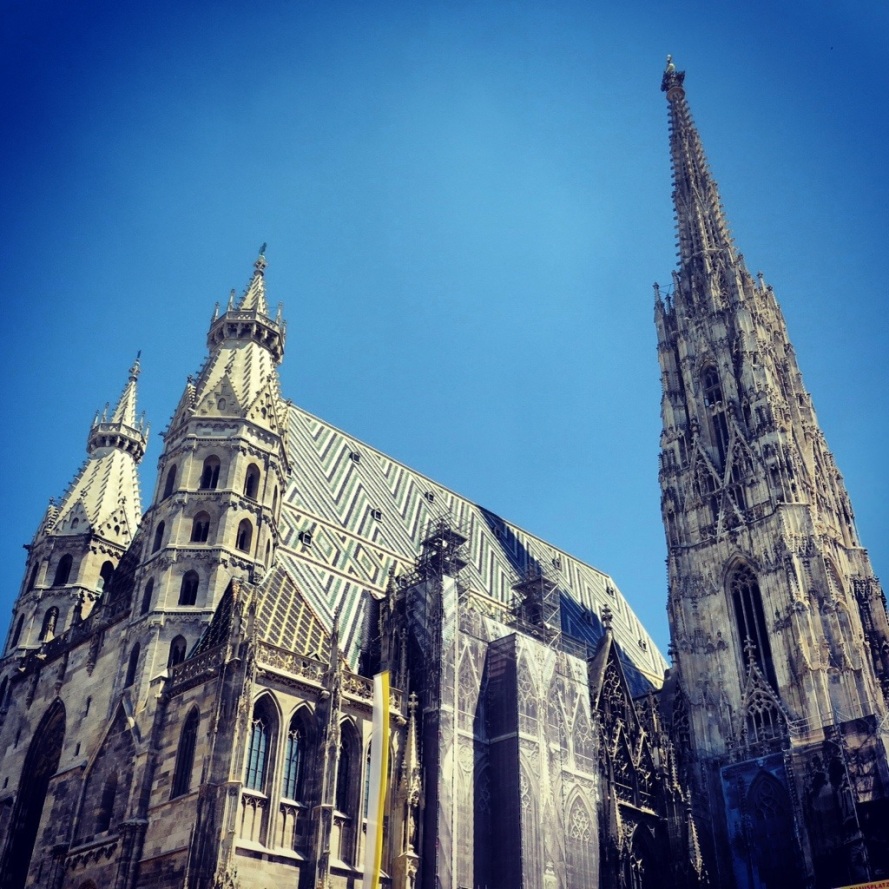 Standing at 445ft, the south tower is the highest point on the Vienna skyline. Mozart was married here and two of his children were christened in the nave. Vivaldi’s funeral was held here in 1741. It’s an amazing Gothic affair with lots of pointy bits. We decided on the combo ticket, which included additional access to the main floor with an audio guide, a trip up both towers and a tour of the catacombs. At some point, thousands of feet of luminescent strings had been installed to capture and reflect the light coming in from the windows, filling the interior with an impressive glow. I’m not sure why, but while we were visiting, these strings were being cut down which gave the cathedral the appearance of a beautiful church in the aftermath of an enormous silly-string party.

Nevertheless, it was still awe-inspiring inside. 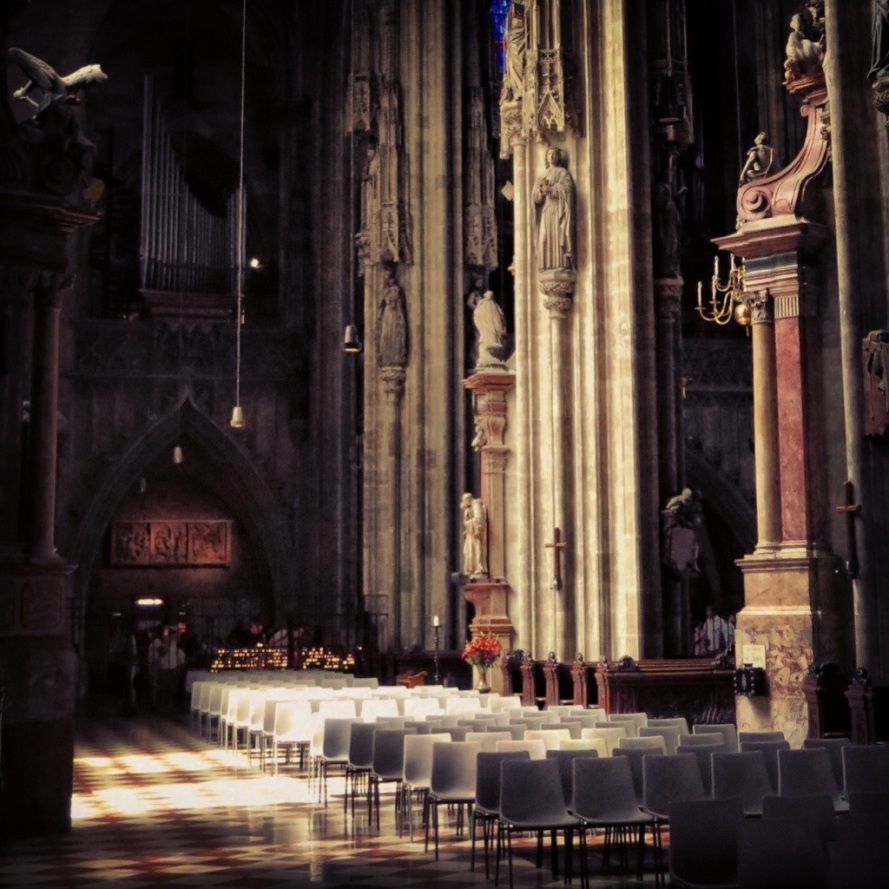 . I am glad we opted for the audio guide, as we learned some interesting things about the ornate pulpit.

There are two circular motifs on the staircase: One is segmented into three parts, with the appearance of rolling up the stairs. These represent the holy trinity. The other motif in the circle with 4 segments, representing the 4 seasons on earth. The idea is that as you climb the pulpit, you leave behind worldly things and rise with the heavens. Carved onto the handrail are toads and lizards moving up the stairs, representing evil. At the top of the handrail, a sculpture of a dog bars the entrance of these evil creatures.

There is a lift up to the north tower viewing platform which sits at 60m tall. It’s a bit bit-tingly to walk around, especially on the bits where you can see through the grating to the streets below.

The bell of the north tower is named for St Mary, but is commonly referred to as “Boomer”. Boomer is just over 22 tons and is the largest bell in Austria, the second largest swinging bell in Europe. They got it up here with scaffolding.

The south tower has no lift; 343 steps to the viewing platform, which is inside (thank god). John made a friend on the way up.

The viewing platform is just under halfway up the tower.

It blows my mind that, as high up as we were at 67m, we went down 94 meters at the start of our salt mine tour. Our last stop in St. Stephen’s was a guided tour of the catacombs. Our tour guide was energetic, funny and really great with the kids on the tour. He was the type of guy who would be really fun to have several rounds of beer with. Photography was prohibited, but we passed through blissfully cold room after room, filled with copper coffins and sealed jugs full of organs. The bishops of St. Stephen’s entombed here, and as our guide told us with a wink, “we’ve got plenty more room!”. We passed through the chambers under the cathedral and made our way further under the streets of Vienna. Here we saw mass graves from the time of the Black Death. They just dug a big pit in the square to toss bodies into. In an attempt to curb the smell, they dumped lime into the pit. Eventually, there was no more room, so someone had the lovely task on getting in there and organizing the bones into stacks, so they could fit more in; this created the ossuary (bone rooms) which we also got to see. It was much like the bone stacks we saw in Kutna Hora, except the Viennese didn’t get quite as creative as the folks in the Czech Republic. I momentarily forgot about the photo ban and got this shot of a former gargoyle. 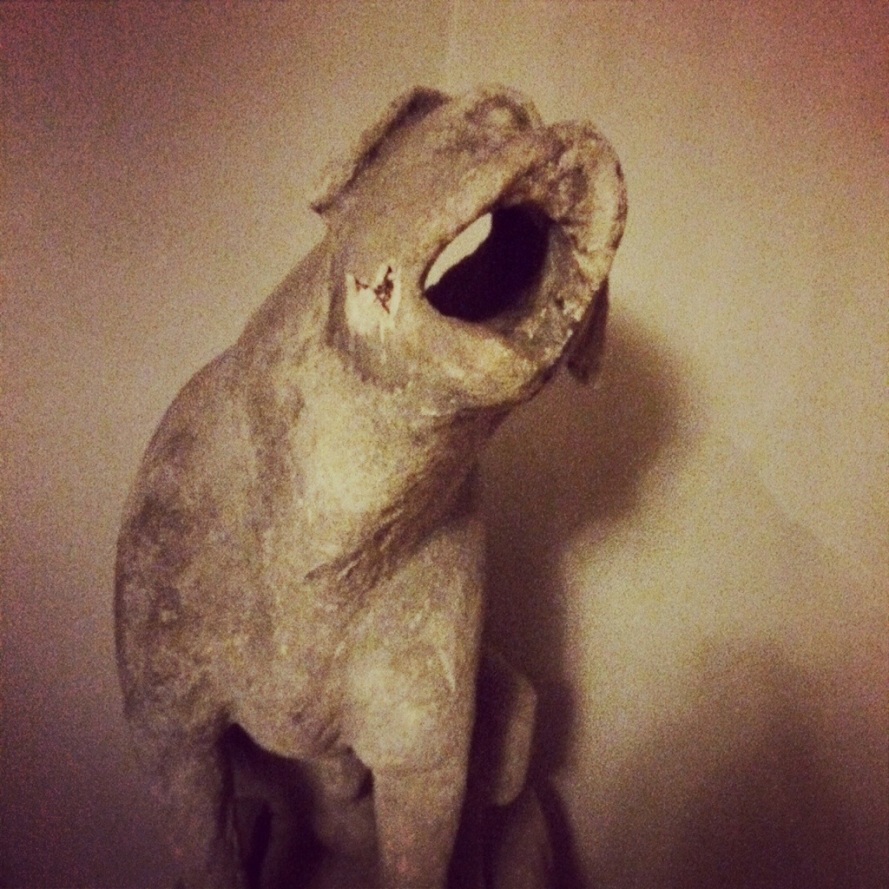 .At the end of our tour, we climbed up some narrow stairs to the street level, where we were greeted by these two. All the horses we’ve seen have little ear hats. If you know what these are for, let us know in the comments. 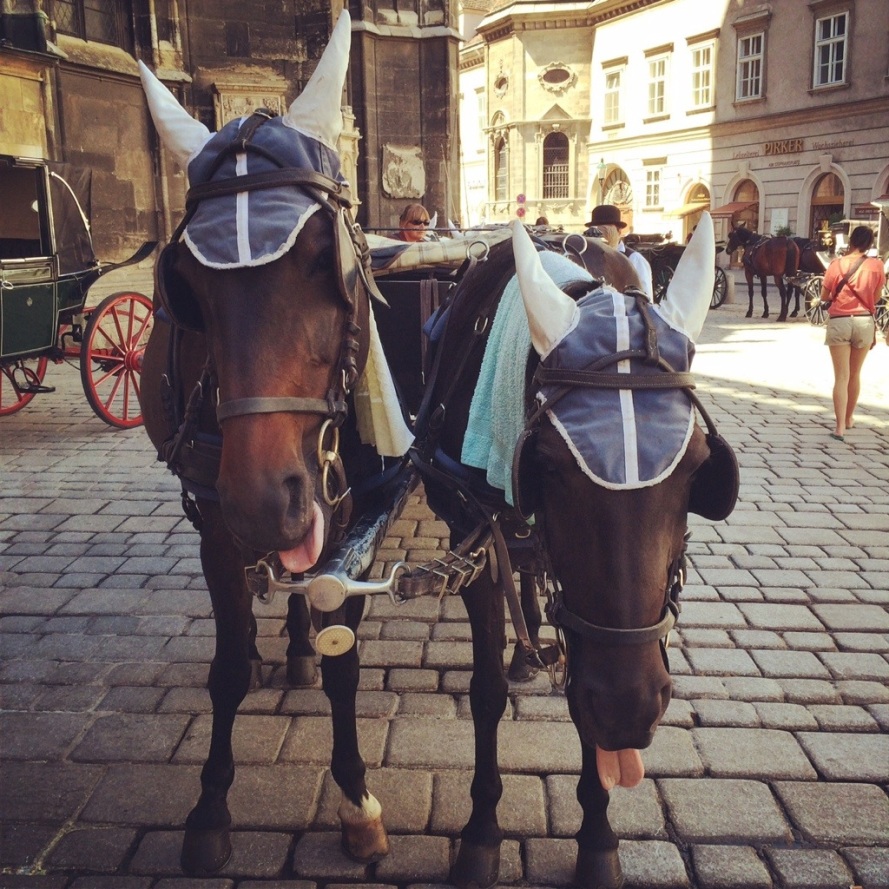 We wandered around for a couple more hours, trying to find some relief from the heat. We had a hot beer in a hot sidewalk cafe, which didn’t help much. Defeated, we headed back to the flat where we chatted with Heinz and Ming. We’ve been so out of the news loop, we didn’t know that Austria had won the Eurovision song contest. Best of all, the Austrian performer was a drag queen with a beard…which is the most excellent thing I have heard all year. Ladies and Gentleman, I present to you…Conchita Wurst! It was the perfect way to end the day.