Salzburg, Austria – The Hills Are ALIVE!!

Our time in Vienna had come to an end, and we said our goodbyes to our wonderful hosts and their pups. Sometimes, the best bits of a trip like this aren’t the new sights and sounds of a new country, but the people that you meet along the way. Especially when they make you delicious dumplings and tea eggs!

The next stop was Salzburg, Austria – home of The Sound of Music and Mozart. That’s not to say they takes pains to remind you of that fact every 3 minutes or anything. We took the train from Vienna, and we are firmly back in the land of comfortable trains. This one whizzed through the country side at 200km per hour, and we arrived in Salzburg in a little over two hours. Salzburg is right on the border of Austria and Germany, tucked in between two mountains, Mönchsberg and Kapuzinerberg. The town straddles the Salzach river and there is the hint of misty Austrian Alps in the distance…it’s a bit like standing in a postcard.

We spent our first evening wandering around the historic center of Salzburg. During the late 1500’s, Prince Archbishop Wolf Dietrich von Raitenau began transforming the former medieval town to the architectural ideals of the late Renaissance. Essentially, this meant knocking down a bunch of houses and creating huge open spaces within the city center. It was through these plazas that we walked, admiring the Fortress that overlooks the town and darting off into little alleyways. We found Sphaera, a sculpture of a man on a golden sphere (Stephan Balkenhol, 2007).

This list of ‘notable people’ from Salzburg is quite impressive:

They only seem to be cashing in on two of these, but I suppose they are pacing themselves. Incidentally, John has never seen The Sound of Music. I quizzed him on the plot and he replied, “A singing family with Nazis?” which I suppose sums it up quite nicely. For dinner, we ended up in a restaurant, the rooms of which were carved out of the rocky hillside. Goulash and sausages were devoured.

The next day, we decided to tackle the fortress, which sits high on a hill above the old town. It is one of the largest Medieval castles in Europe. Construction of the fortress started in 1077, and since then it has grown like Topsy, each ruler adding bits on as they saw fit. What is left is a remarkably large and well preserved castle, which we climbed over, around and through for a couple of hours. It’s a formidable structure, and much like Edinburgh castle, no one had a chance in hell of taking it by storm. The only time it fell into foreign hands was in 1800, when they handed it over to Napolean without a fight. Highlights of the trip are as follows:
1) a great display of armor 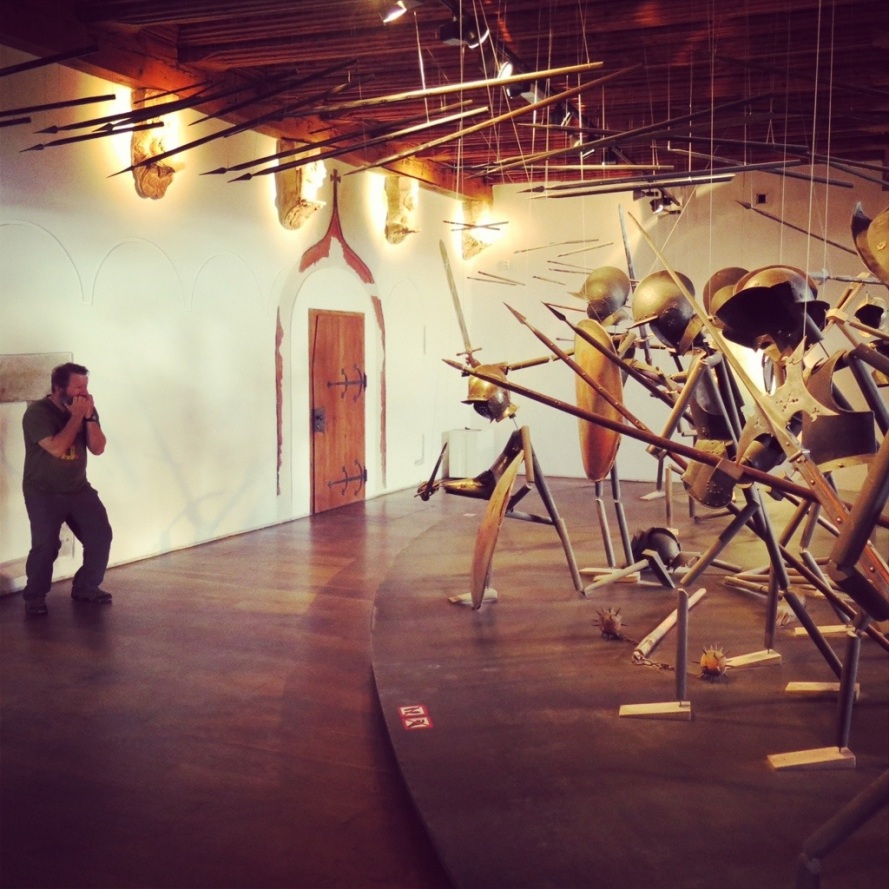 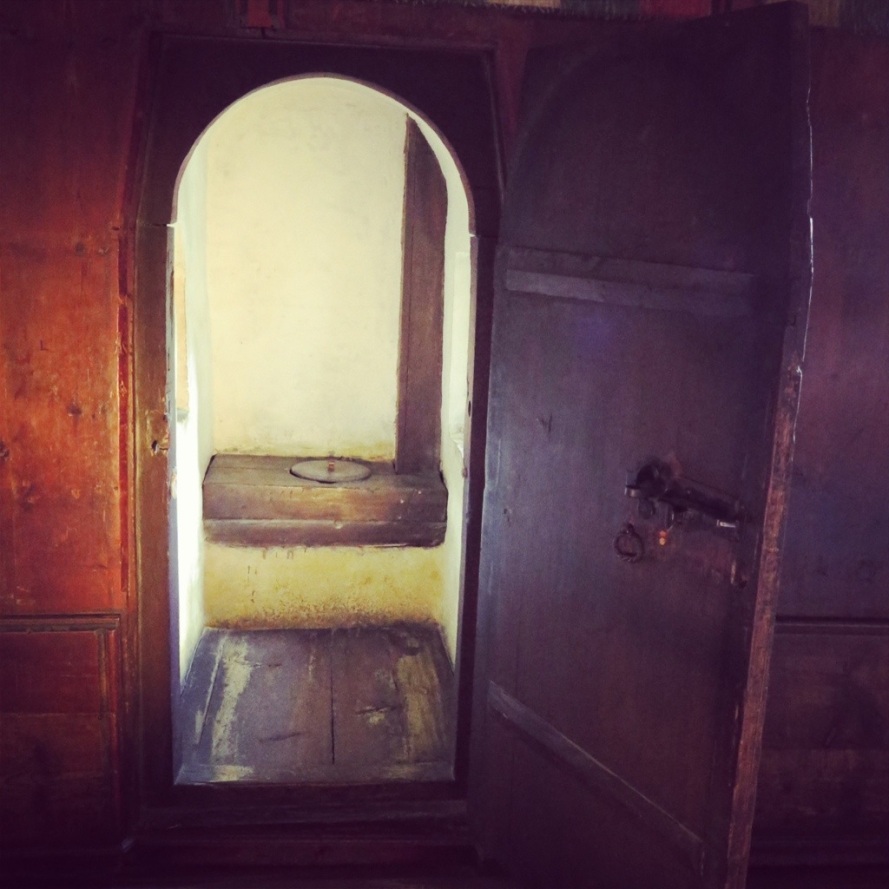 4) spectacular views from the battlements.

We opted to take the funicular up to the fortress, although it was suggested that we should attempt the climb up as it’s “not that bad…” As we skidded and slipped down the dust and gravel path at a 45 degree angle on the way out, I’m glad our funicular-passion won this battle.
We were craving a good pub lunch; I guess it’s countless hours of watching NFL games from 12pm-10pm on Sunday that gets our internal clock ticking away. We pushed past the tourists and tried every tiny alleyway we could find, but we were stumped at every turn. There were plenty of cafes and posh restaurants about, but all the places that fit our needs were closed down on Sunday. We settled on a pizza place, which served me the biggest glass of diet coke I’ve had since we started this voyage…it was the same size as John’s beer…which is saying something. The restaurant was located right beside the entrance to the Modern Art Museum, which we interpreted as kismet, and wandered in after all foodstuffs had been consumed. Maybe it hasn’t been long enough since we visited an art museum, as I blazed through this one pretty quickly. My favorite part of the trip was the view from the observation deck. Salzburg was laid out below us like a postcard.

The rest of the evening was fairly packed, although some might consider a bit mundane. Beers were drunk, postcards were written. I had the pleasure to receive a lecture from our AirBnb host…I won’t document it here, as I know there are some folks who are following along that might not appreciate my language, so all I’ll say is he won’t be getting a good review. We escaped our host and had a late night Chinese feast and watched S4E1 of Game of Thrones. John has hooked up the technology to beam HBO Go to the iPad, so now we can catch up on Season 4. Nobodyspoilitforme!!!

The next morning, I woke up to blinding sunshine streaming through the window, feeling well rested. John, on the other hand, had a pretty sleepless night, due to the fact that I had been loudly snoring my head off for 6 hours. I must have been in fine form because he had actually slept in the opposite direction, just to get his head as far away from the noise as possible. I wish he could have gone back to bed for a while, but we were being hustled out by our host. We couldn’t check in to our next place until later that day, so we dropped our bags off at the central station, and headed to the hills.

Untersberg is the closest true Alpine peak to Salzburg, about 11km away. There are several legends involving the mountain, both featuring prominent people sleeping inside of it. One states that Charlemagne is in there, being taken care of by little mountain gnomes. He wakes up every 100 years, checks that there are still ravens flying around, and then goes back to sleep. It seems to me that Charlemagne has definitely lost his go-getter attitude in recent years.

You reach the summit of Untersberg via cable car…a terrifying cable car. In 9 minutes and 10 seconds, you rise 1320 m (3960 ft). The largest distance from the ground is 286m (858 ft) and an there’s an enormously long free-hanging span of 1.548 km between the valley station and post I. Our car was full of pushy, old French people…which made the experience even more alarming. 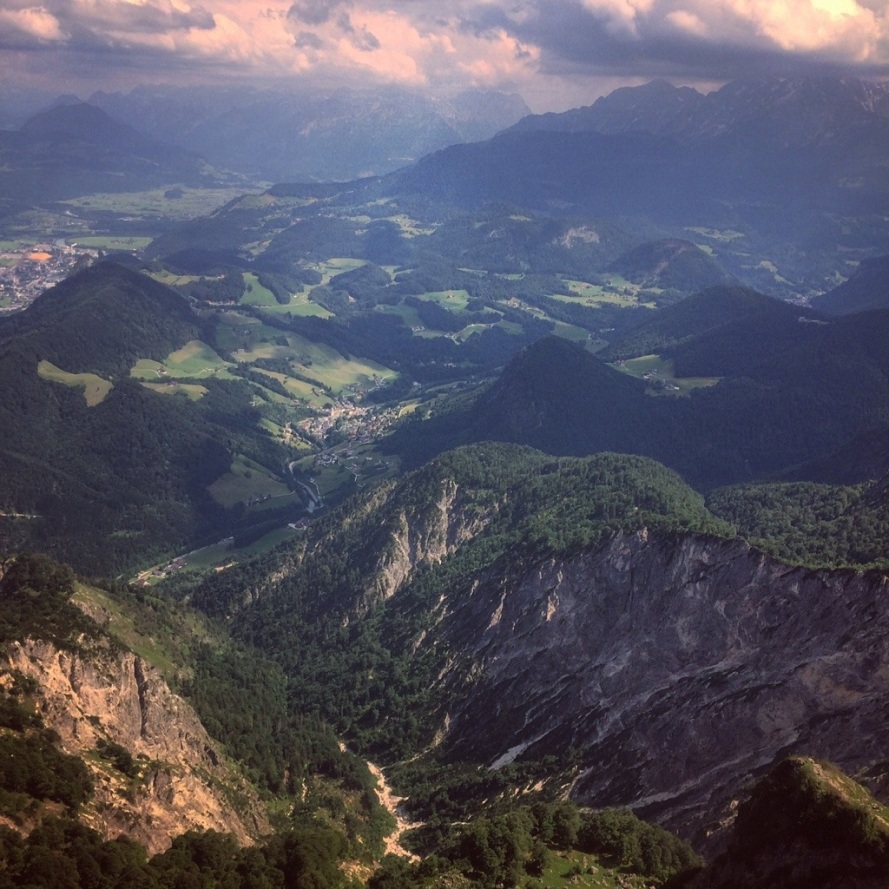 I was gripping onto the floor with every foot muscle I possessed. When we reached the summit, we rubbed the tingles away, and stepped out to enjoy the view.

Other than the Frenchies, who disappeared quickly into the restaurant, the mountain summit was populated entirely with Americans. I’m sad to say, they were loud, dumb and annoying. One gem we witnessed was a 20-something girl point at a patch of snow and say “Look, it’s one of those ice snowy things…glaciers?” The sound of our hands smacking our foreheads in unison echoed through the valley. This same group was also pausing to take ‘jumpy’ pictures at every view point. I understand documenting the fact that you were there, I have taken a lot of pictures of John looking at mountains (and there is more to come)…but the jumpy picture is the most annoying version of a ‘selfie’ imaginable. It screams I am more interesting than the scenery which, when you are in the Alps, is impossible. I know I am rapidly turning into a grump old fart, but I wish this form of self expression would be outlawed, it annoys me beyond belief. Anyway…here is a picture of John looking at mountains, which I hope is a little more tasteful.

We hauled ourselves up to this spot, which is accessible via a crumbly and rocky path, and soaked in the Alps. The day wasn’t so clear, so they mostly lingered around on the horizon, looking mysterious. 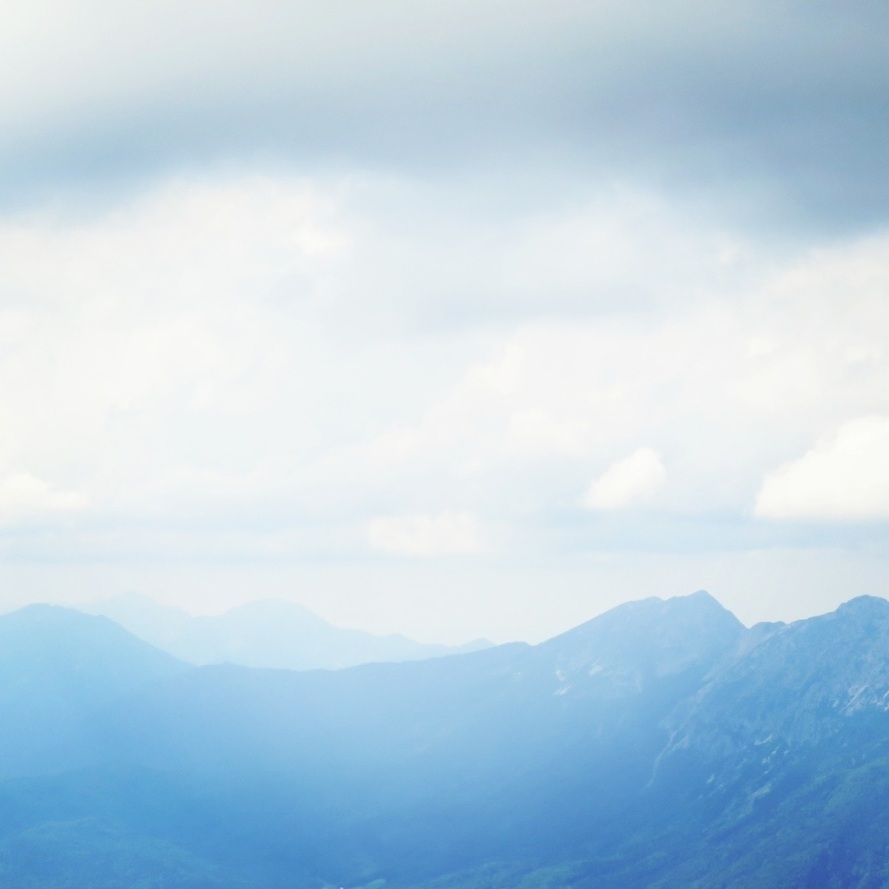 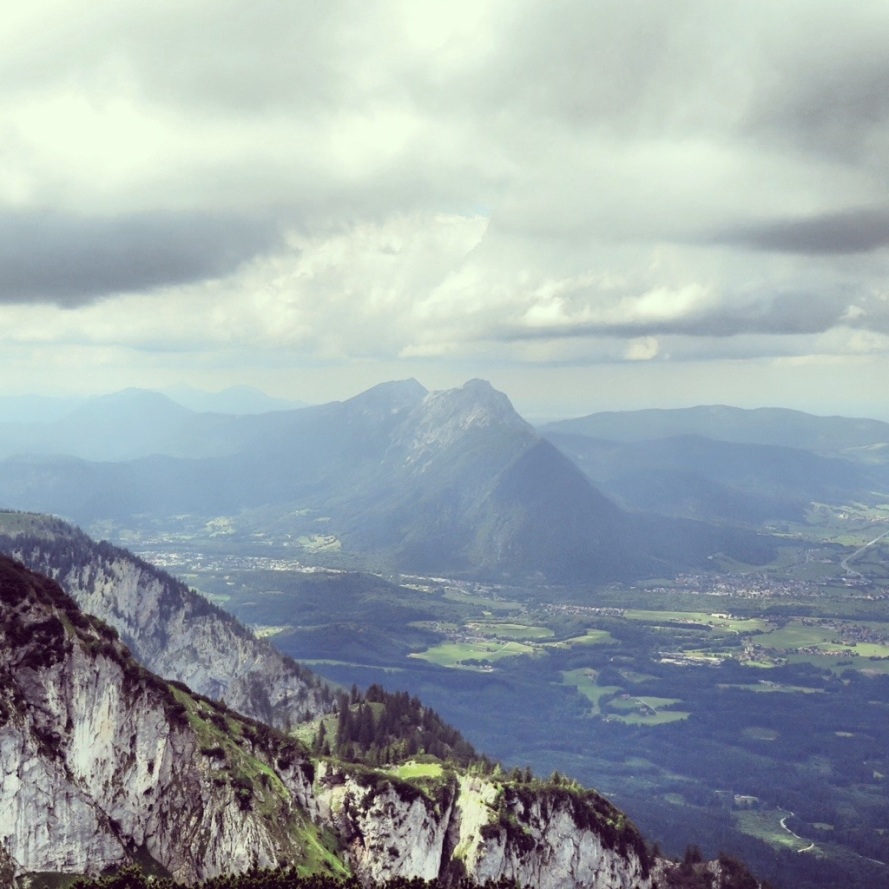 The descent in the cable car was more alarming than the ascent, probably because we were smushed right up on the glass, facing down. I don’t mind admitting that I was clinging onto John quite tightly. He uttered a quiet, but emphatic, holy shit during a particularly steep bit, but otherwise showed no signs of fear (as expected).

We had a couple hours of tourist time left in the day, so we stopped off at Hellbrun Palace.

It was the residence of Markus Sittikus von Hohenems, one of the Prince-Archbishops of Salzburg. Apparently, he was a bit of a douche, as he commissioned the creation of the Wassenspielen, or, trick fountains.

This fine gentleman would regularly take his guests around the grounds, disguised as a beuatiful garden, and then soak them with surprise jets. One such setup was a stone table, around which the party would enjoy an al fresco meal. At the end, the waterworks would turn on and every guest would be treated to a cold-water enema from the jet that was hidden in their seats. The only seat without a jet was that of the Archbishop himself. In fact, each of these trick fountains was fitted with a safe zone that the Archbish could stand as everyone around him got soaked. This spot is where the tour guide stands today. 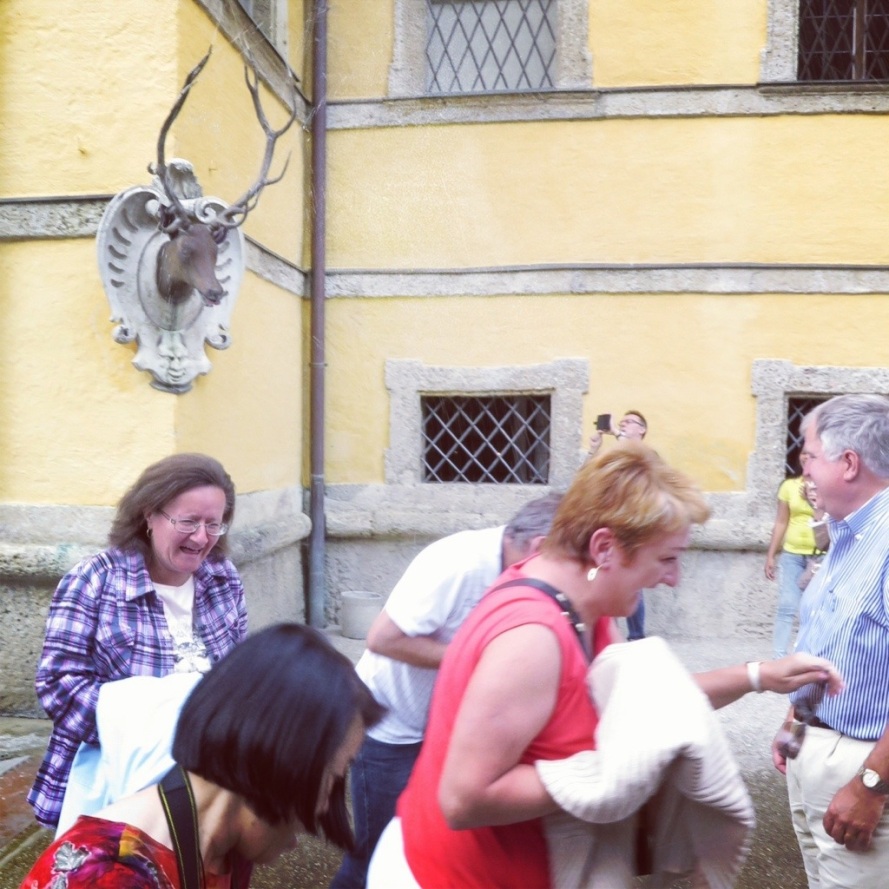 These ladies thought they were safe, until the dear statue turned on. Fortunately, it was warm outside, so we dried off pretty quickly.

Tourist time was over, so we transferred our belongings to our new flat. My hopes for taco night were once again dashed. After Poland, which was a taco-free country, we had hoped Vienna would provide us with taco fixin’s. Alas, only taco-spice mix could be found. Now, starving for tacos, we ventured out to the grocery store, which closed at 7pm. In fact, all grocery stores close at 7pm. I am impressed that Austrians manage to have all the shit they need acquired and squared away prior to 7pm on a weeknight. We settled for going back into town and had dinner near the train station. Well fed and worn out, we finished the day by resting our achey feet and watching Game of Thrones until we fell asleep.