Hey you guys! How the hell are ya? Greetings from old München.

Today’s main event was a trip to the BMW factory and museum in Munich. The factory tour was booked, but we showed ourselves around BMW’s flagship showroom and museum. It was impressive. 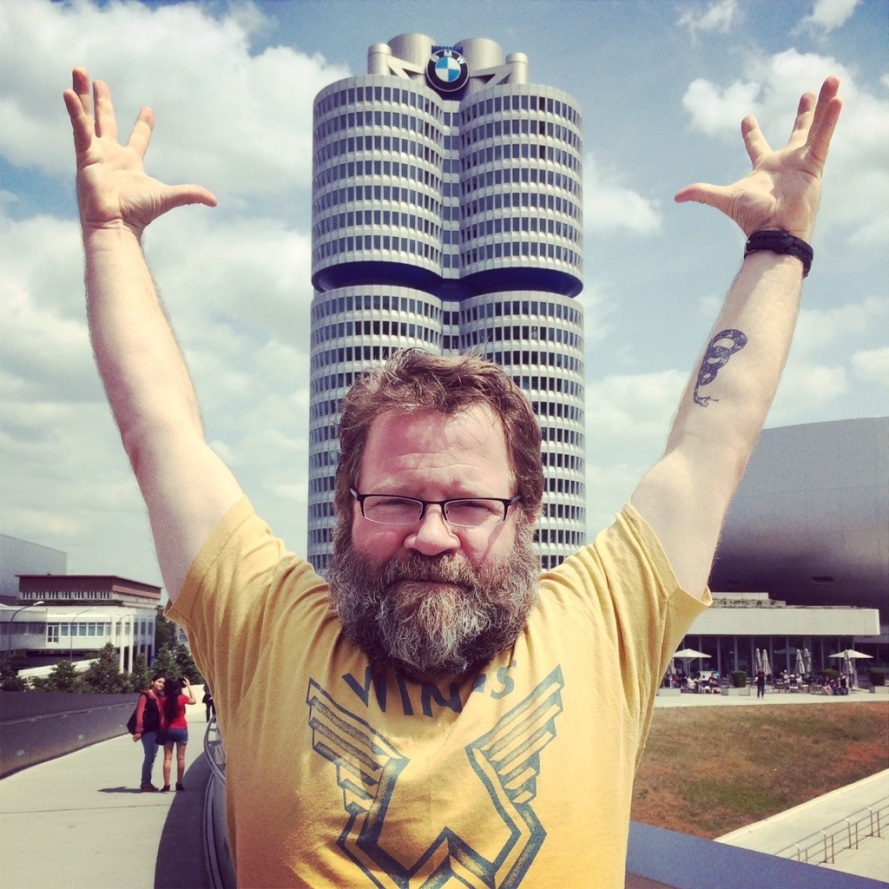 We were greeted by this M4 model as we arrived. She’s an absolute beauty. I don’t know that I’ve ever seen this color (a yellow gold metallic flake) on a car driving around America. You can have one of these for your very own for about $130K. 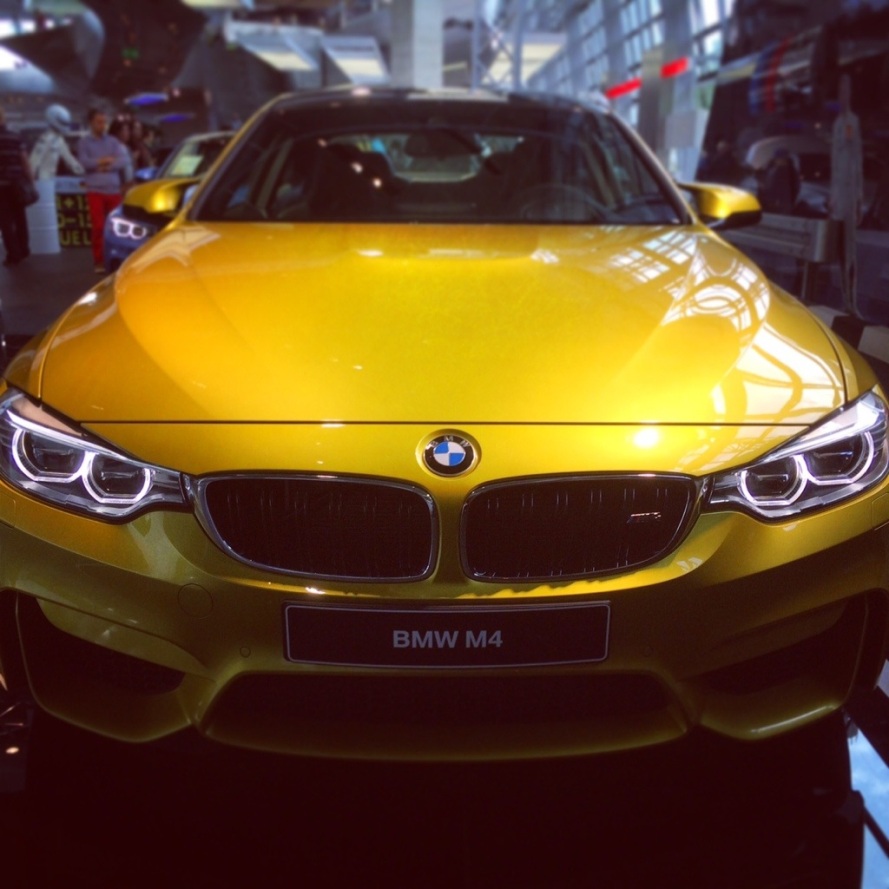 The building that this fine vehicle rests within in is a pretty piece of architecture in its own right. The kids at BMW talk a lot about valuing quality, engineering, and beauty, and it shows in almost everything they produce, including the building. This building sits on a campus that also houses their corporate HQ, their flagship showroom, their flagship manufacturing facility, and their museum. In this photo, you are seeing the showroom area on the right. You can apparently test drive a car by driving it right down the ramp and out to the street. 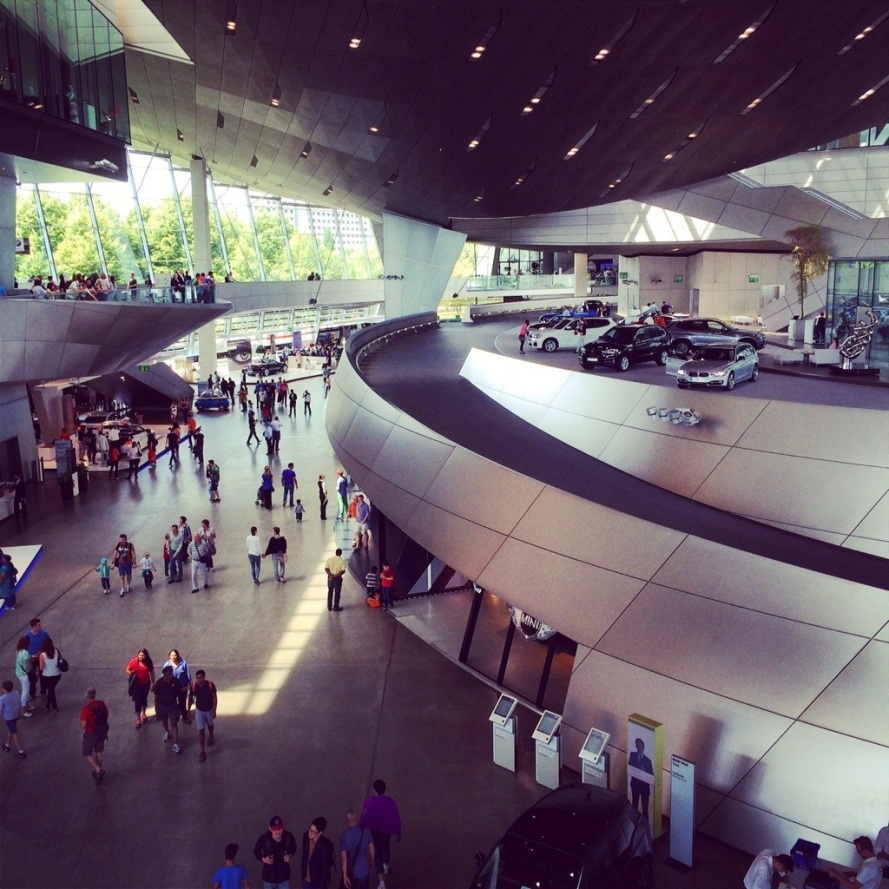 The story of BMW is complex, but the simple version is that they started out as a small manufacturer of high-quality, high-performance airplane engines around 1917. These engines were used in German military aircraft in World War I. The company struggled somewhat after the end of the war, but continued to design and manufacture airplane and other engines. In 1923, BMW entered the motorcycle market, developing medium and high-end bikes. BMW was known for excellence in quality and engineering. They innovated in the use of the drive shaft-based motorcycle transmission, which they continue to use today. They innovated in vehicle suspensions and frames. 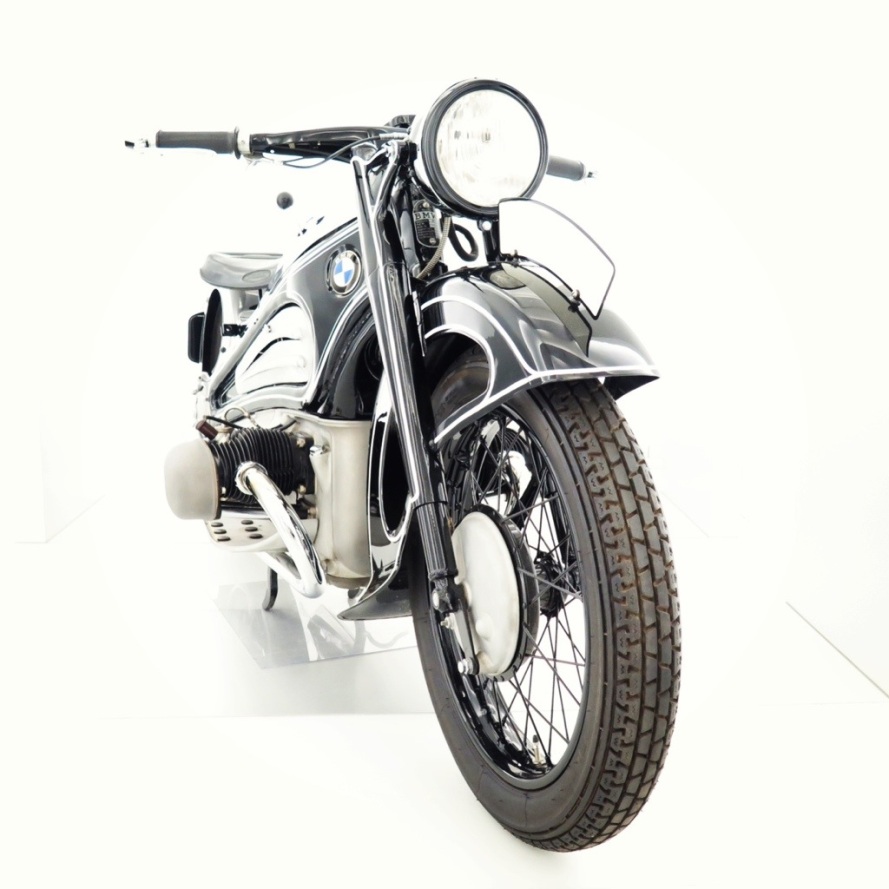 This bike was built in 1932, and is noteworthy for a number of things, including the fact that all drive train components (primarily, the drive shaft and cam shaft) are encased in an aluminum casing underneath the engine. The braking cables are hidden within the handlebars. It’s a beauty. Also, this photo is sick…I’m making this into a T shirt and ordering one after I finish writing this blog. Let me know if you want one. 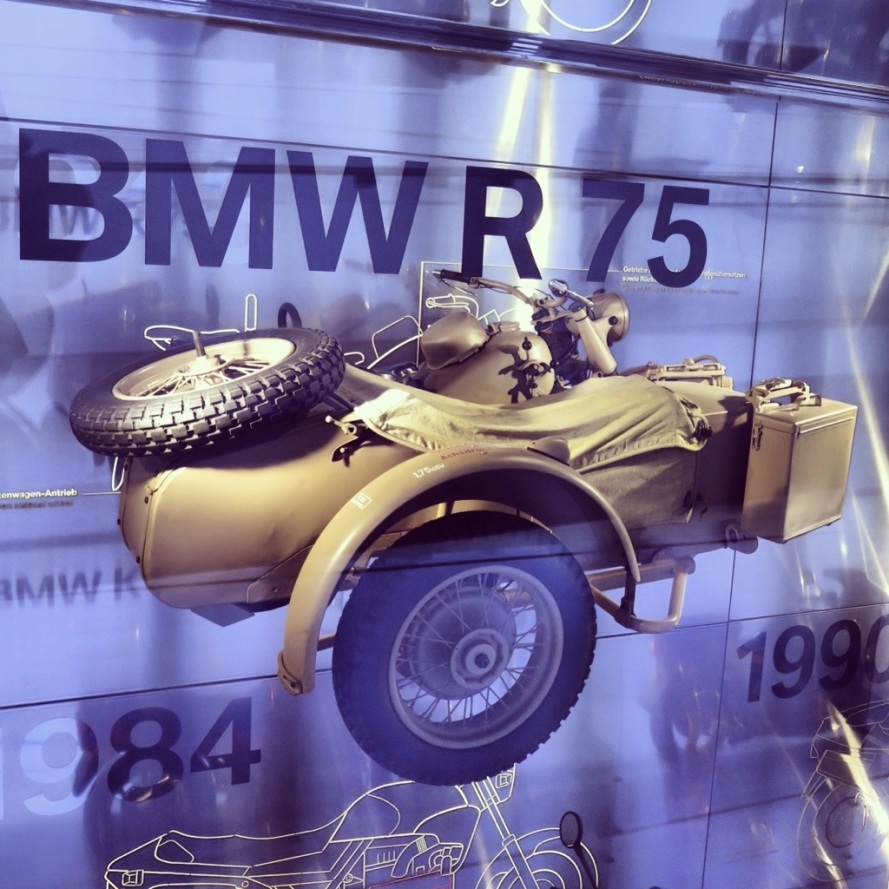 This bike and side car were built in the 40’s for der Führer, etc. Airplane engines and bikes for the Wehrmacht became BMW’s main trade during World War II. This bike had a reverse gear on it. How cool is that? 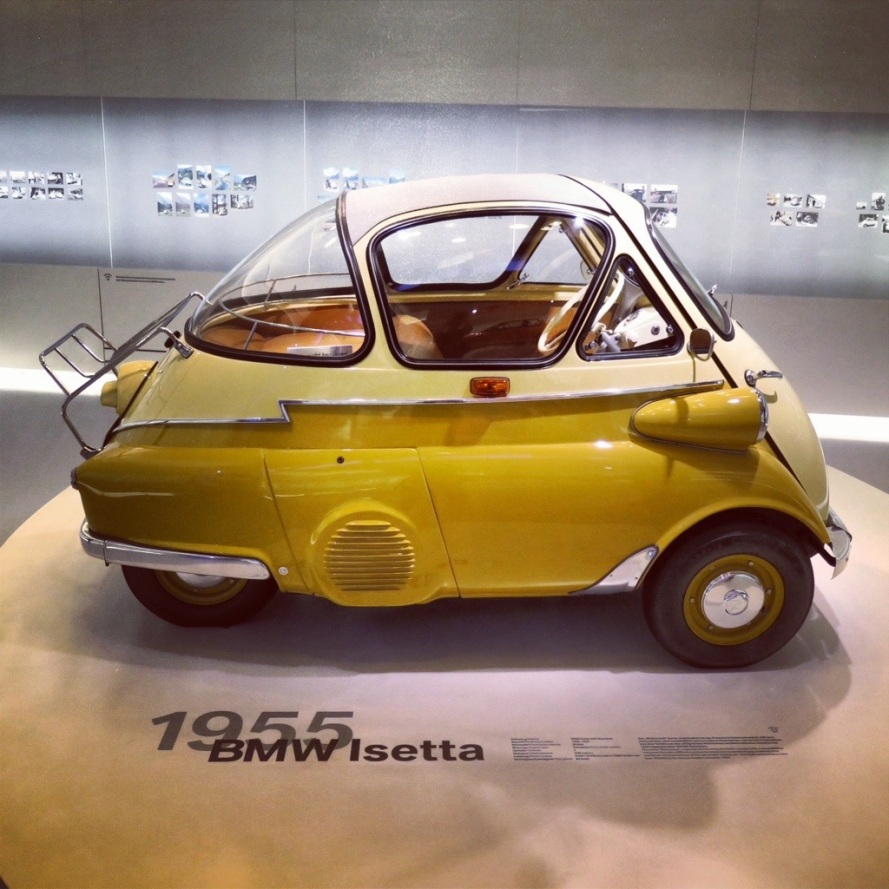 After the war, BMW re-established themselves as a manufacturer of civilian motorcycles and automobiles. They were making conventional cars by this time, but this 1955 Isetta is basically a fully-enclosed, 3-wheeled motorcycle. By the way, if you live in Nashville and want to see one of these, visit the Lane Motor Museum on Murfreesboro Road. 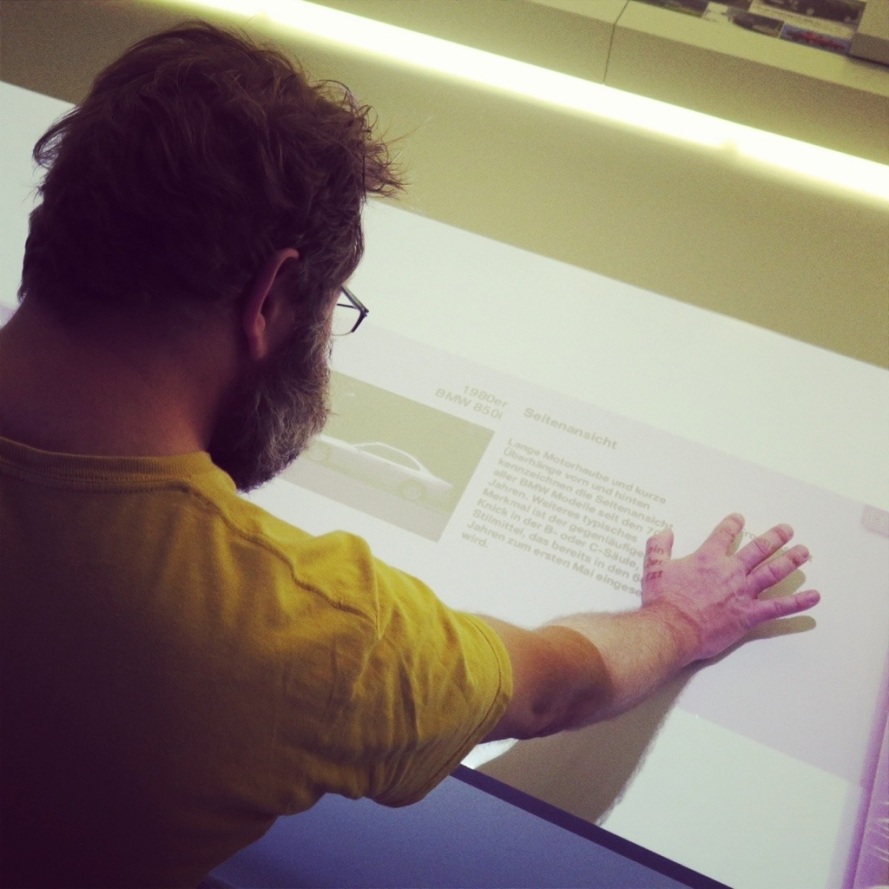 Here I am messing around with an interactive display at the BMW museum. This was an image projected onto a counter top, but I could interact with this display to change its contents by pressing “links” on the projected image. I’ve seen presentations about this kind of technology, but never interacted with it in real life. This museum may have been designed by Tony Stark. 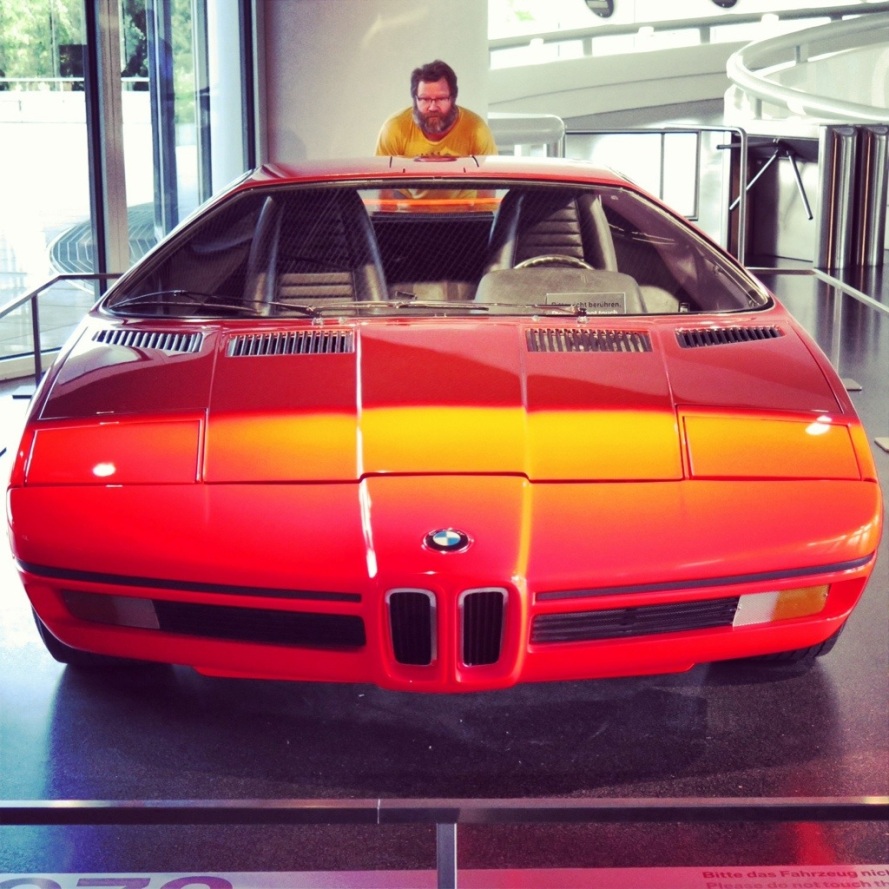 This sexy beast is a prototype that was built in the 80’s and looks like a Delorean. It claims to have “self-repairing crumple zones”. 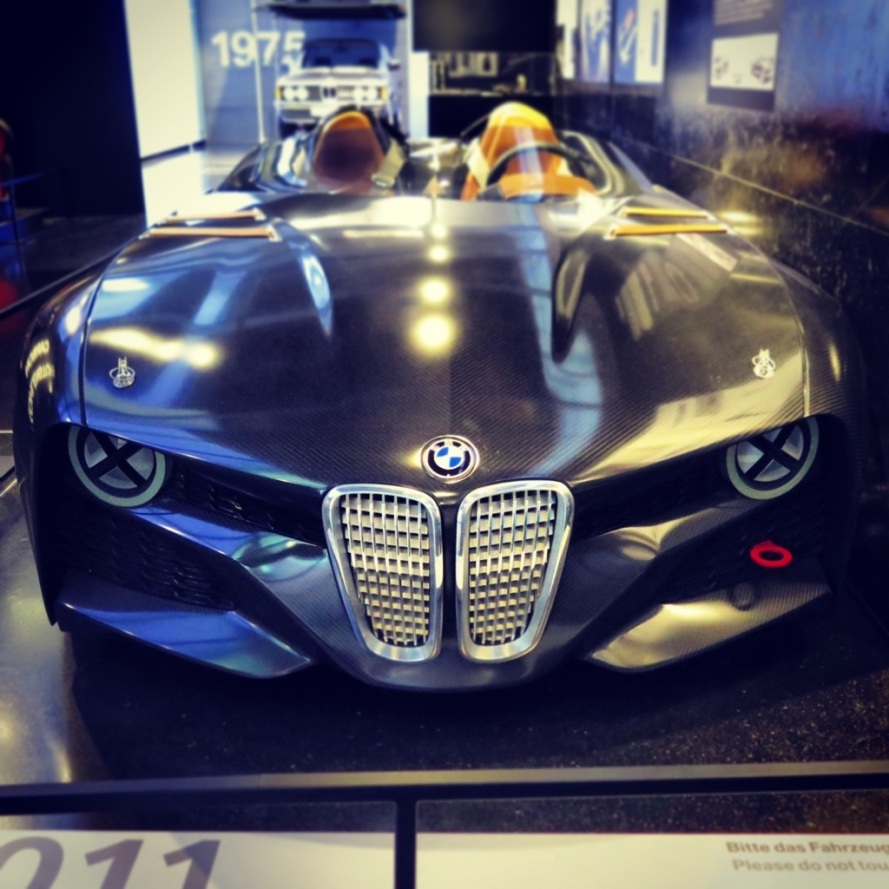 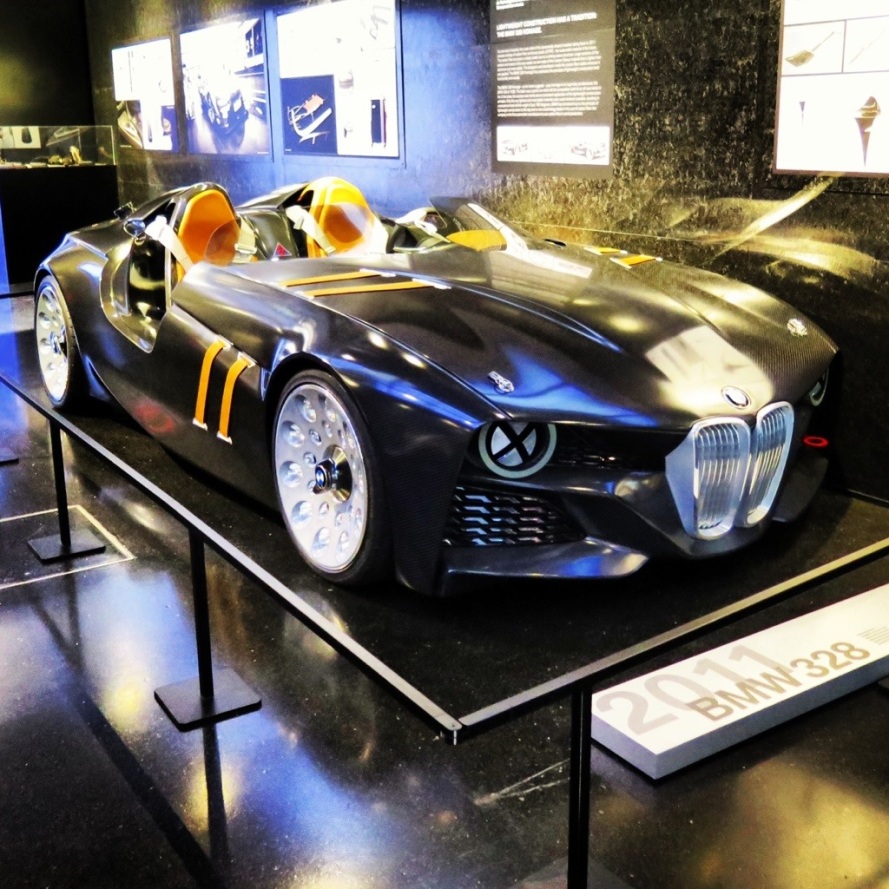 This car is another prototype, constructed in 2011. Folks, I have looked at a lot of cars and pictures of cars. This is the sexiest vehicle that I have ever put my eyeballs upon. It looks like Racer X’s car from Speed Racer, only more bad-ass. It was in an area touting BMW’s advances in the use of lightweight materials. The body of this prototype is made of plastic that is re-enforced with carbon fiber, making it super-strong yet super-light. One might even say über-light. 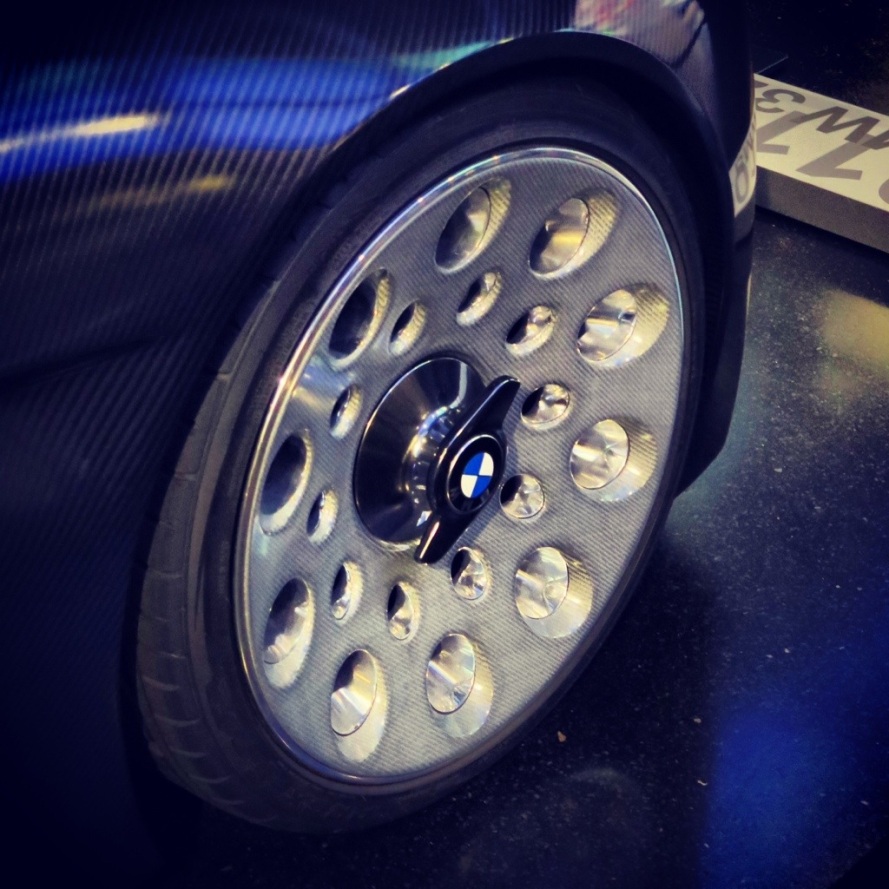 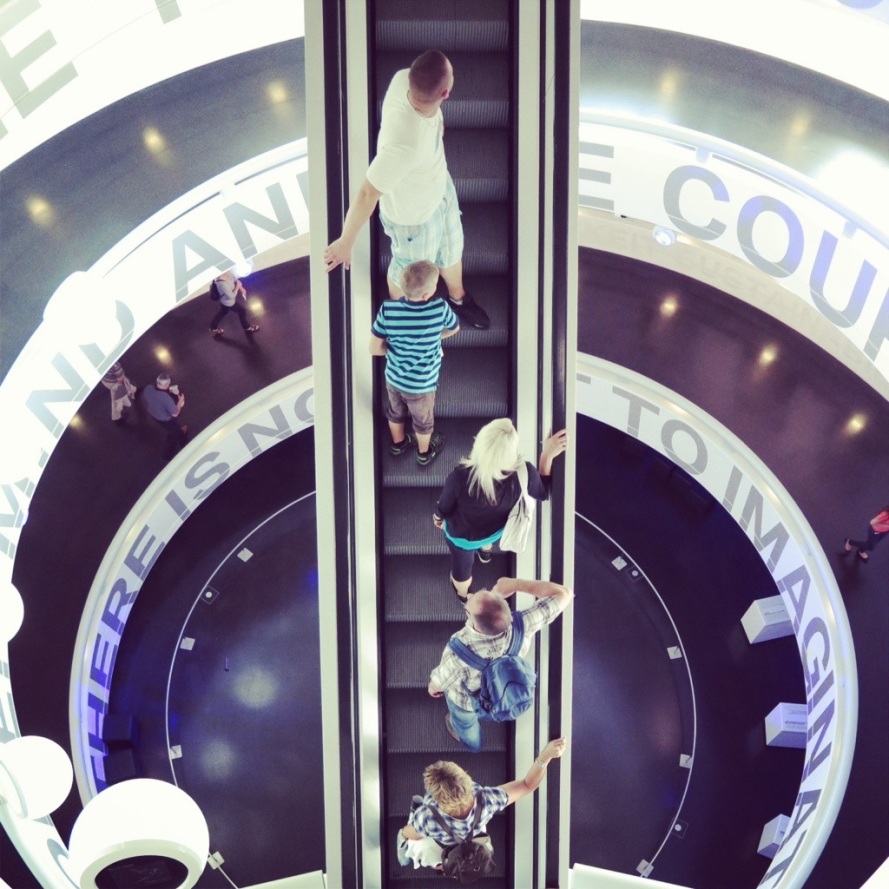 A nice little pic that Bex took showing the design of the museum. It’s a spectacular place. A palace. This escalator lead to the Rolls-Royce exhibit.

BMW bought Rolls-Royce a while ago. Although one of the boys at the Rolls-Royce exhibit argued about this today for 5 minutes with a guy from South Carolina. “No No No, Rolls-Royce was not bought by BMW! They are partners.” Well, whatever the arrangement is, BMW is now making and selling Rolls-Royce automobiles. They still make ’em by hand too. Interestingly, that means that the main supplier of WWI aircraft engines for Britain is now owned by the company that was the main supplier for aircraft engines for Germany during WWI.

We don’t have a ton of photos, but here are a couple of shots of the Phantom III from the 20’s. 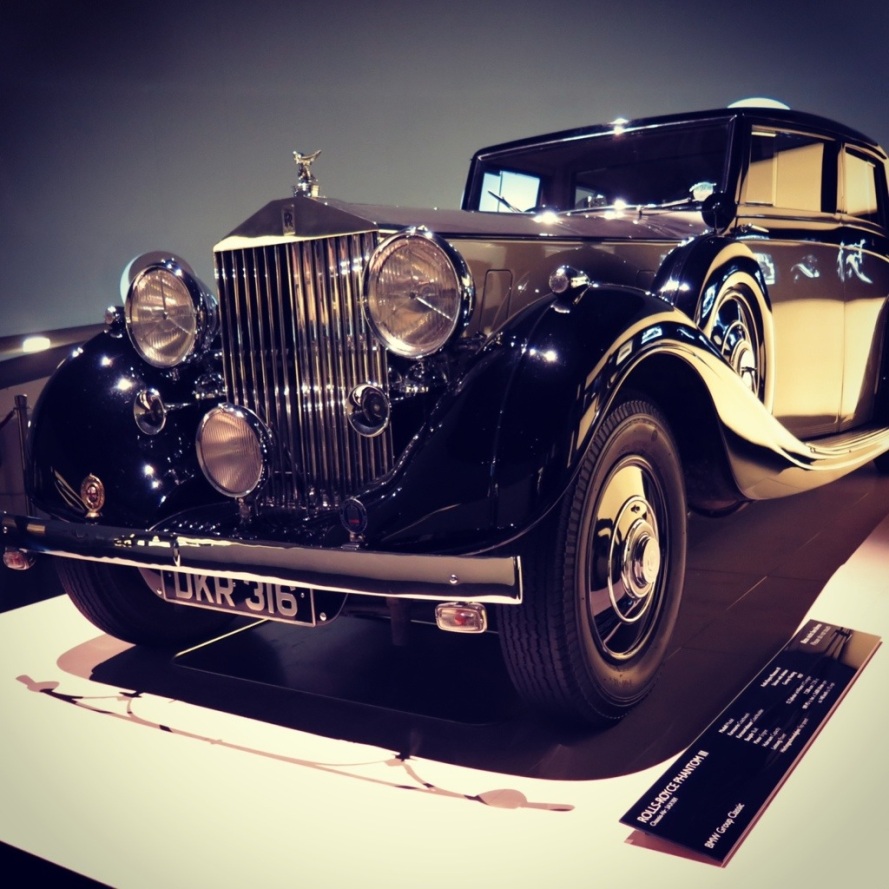 Check out the outrageous positioning of the front axle…right under the grill! It was moved back to a more conventional position shortly after this vehicle was built. 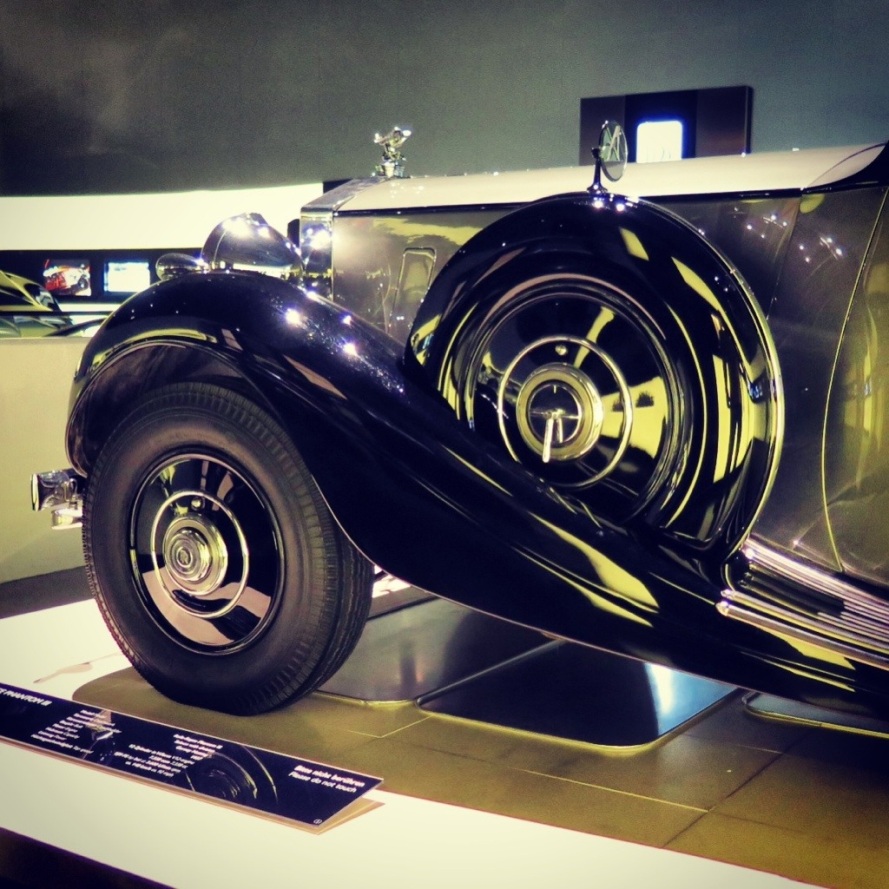 I am also amused by the spare tire. I imagine that far more drivers than owners of Rolls-Royce’s changed the flat.

Before we left the BMW museum, we visited the BMW Lifestyle Shop. Yes, you read that correctly. We decided to find and photograph the most outrageous “lifestyle” item that we could find. 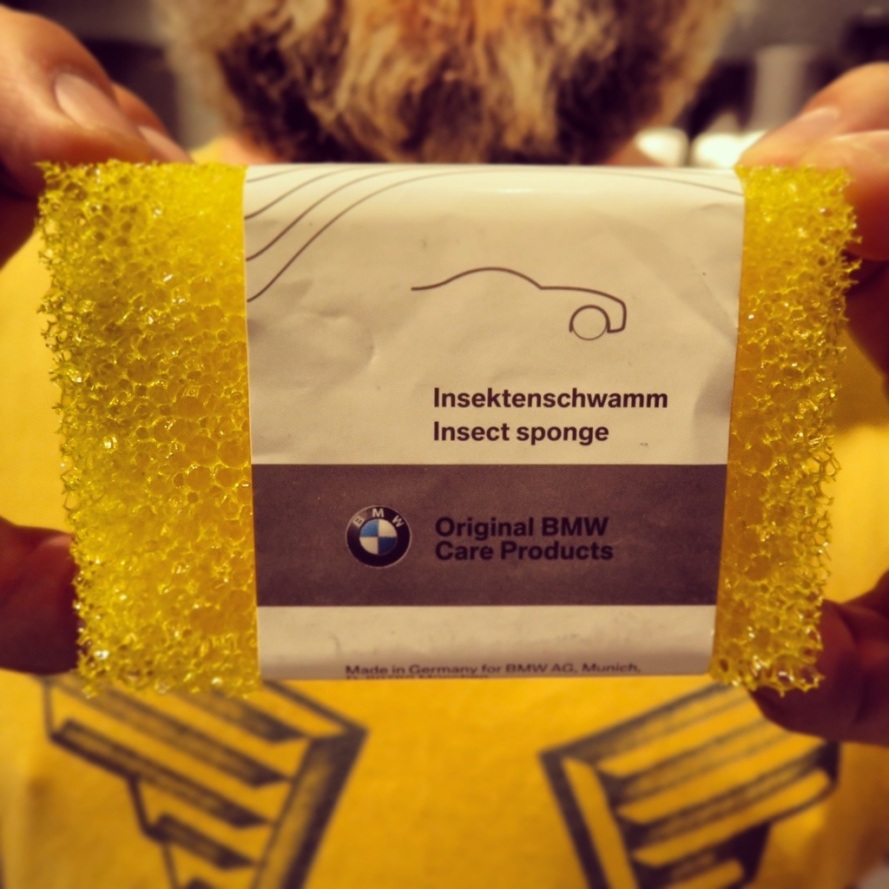 Becci thinks that it is this BMW-branded bug sponge. 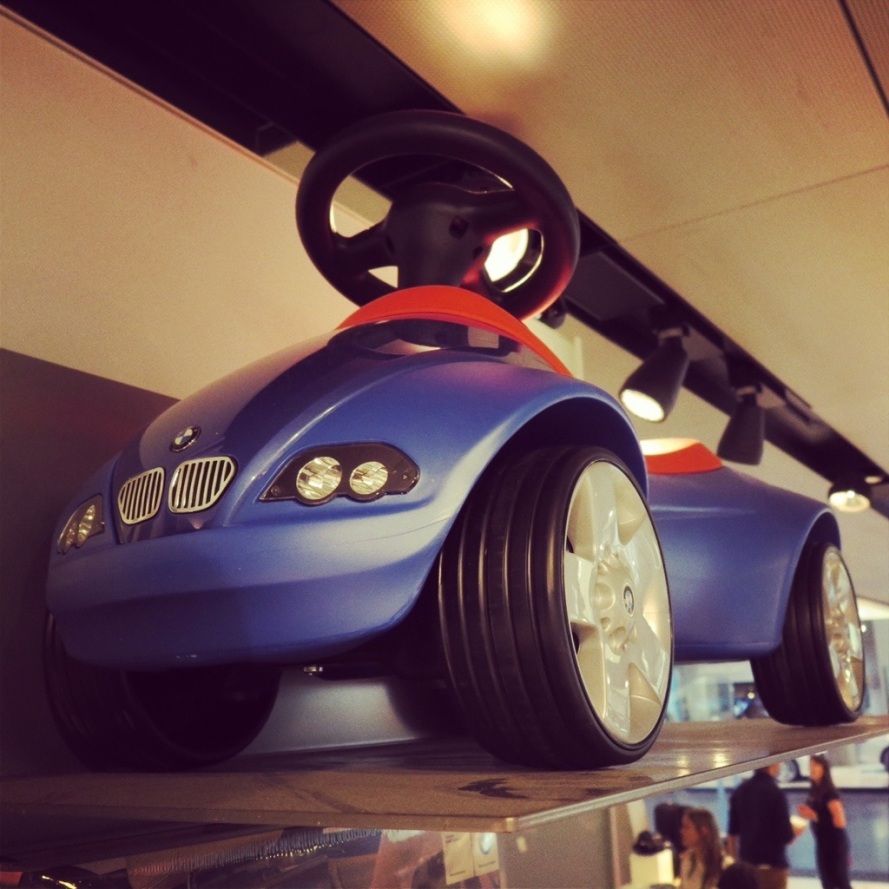 My vote, however, if for this official BMW child’s scooter, due to the exorbitant pricetag. 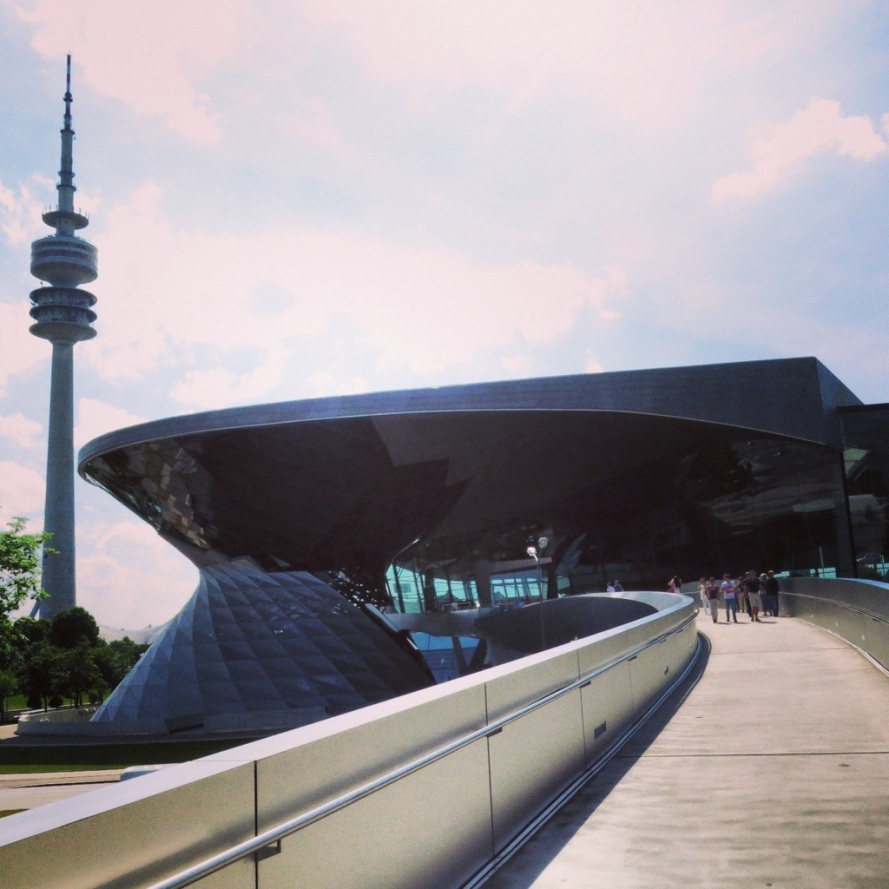 Here’s how this place looks from the outside. She’s spectacular.

As you can tell, we were both pretty impressed with the visit to BMW. Beautiful cars. Spectacular bikes. Racing records. Technical and design innovation out the wazoo. A profitable business. An immense, immaculate campus to show it all off.

Let’s talk about what is disappointing about BMW. 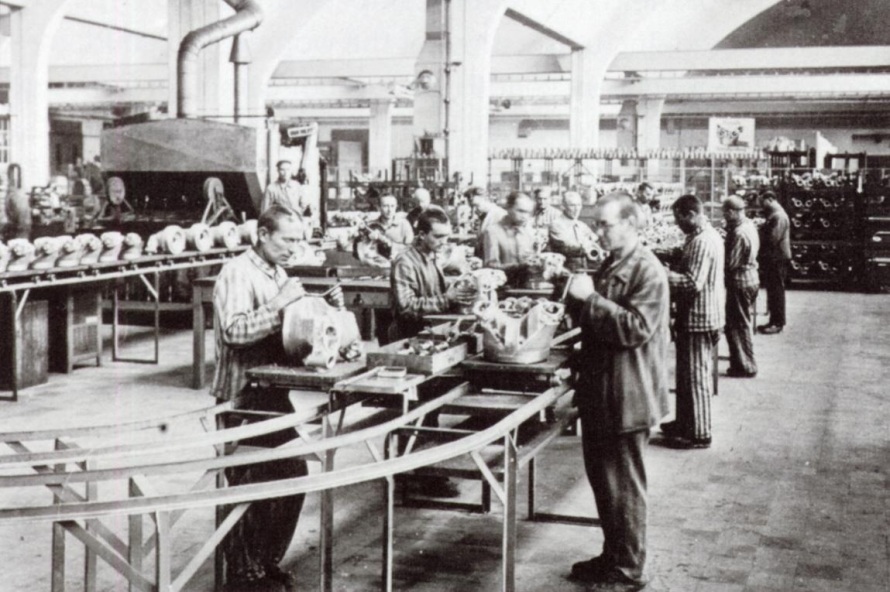 BMW employed thousands of slave laborers during World War II. Estimates go as high as 50,000 people. Most of these slave laborers were prisoners of Nazi concentration camps.

By 1942, forced laborers were part of daily life in Nazi Germany. Deported workers from all over Europe (Eastern Europe in particular) were exploited in armament factories, on building sites and farms, in public institutions, and in private households. Forced labor of this sort was without precedent in European history. It was part of the Nazi racist social order from the beginning. BMW was a strong participant in this practice, yet was among the very last to admit their role. In the spectacular, thorough museum that we visited, I saw one small panel devoted to this topic. And a book. It was the only book that I saw during my visit; everything else was projected or appeared on a large display. BMW has hardly come clean about their legacy.

As impressed as I am with their technology and their innovation, their strong connection with Nazi slave labor is why I will never buy nor own any BMW product. I have no problem with BMW manufacturing armaments for her country during wartime, but enslaving races of people is unforgivable. BMW used slave labor to their own gain, and later denied it. I respect their accomplishments; I despise their ethics.

Olympiapark is the site of the 1972 Summer Olympics, which were held in Munich. Its still there, still in use, and still looking cool. We were unable to go on the full tour during our visit, as there was a cycling relay race going on while we were there. But we did get some great shots of guys racing in this 24-hour team relay. 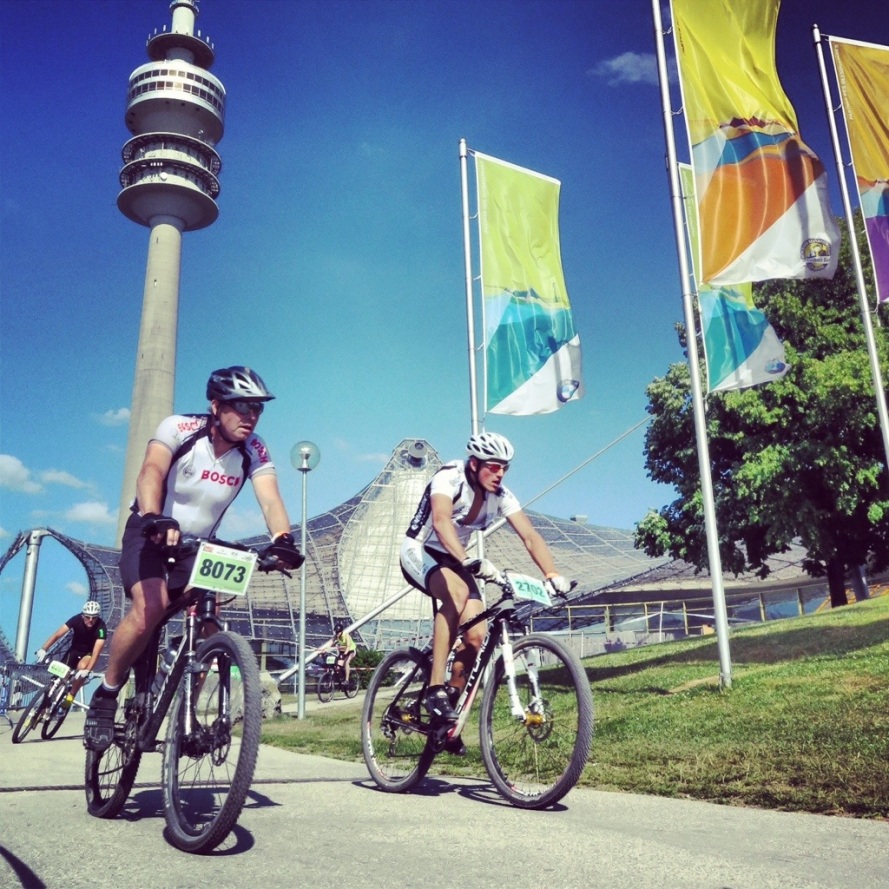 Seeing this event reminded Bex of all of the time she spent as a kid racing bikes with her father. She got a bit nostalgic while taking these pictures, and she asked if we might dedicate this blog post to her father. Of course we can! It’s our blog, we can do whatever we want! Geoff Brace, this one’s for you.

Next up…a visit to the Olympic Tower (aka Olympiaturm). It’s the tall thing that you can see it in a couple of the photos above. This is a 300 meter-high tower in the Olympiapark, which today serves as a broadcast tower. At a height of about 200 meters, there is an observation deck and a small rock ‘n’ roll museum. I have no idea why the museum is there, but hey, let’s go see it!

As expected, the views from the platform were nice. Becci hates heights and was quasi-freaking out during all of this. She took some awesome snaps tho’, as always. 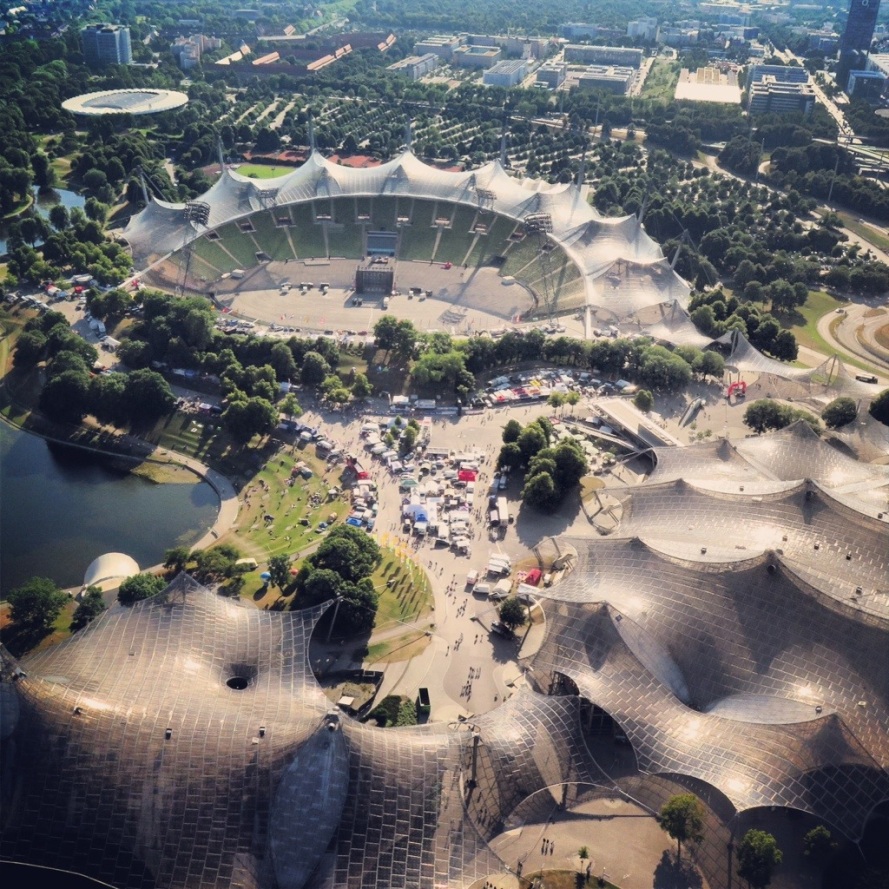 The rock ‘n’ roll museum was small, but it had a couple of cool things. Here’s a handwritten note from Keith Richards to some girl, from way back in the day. 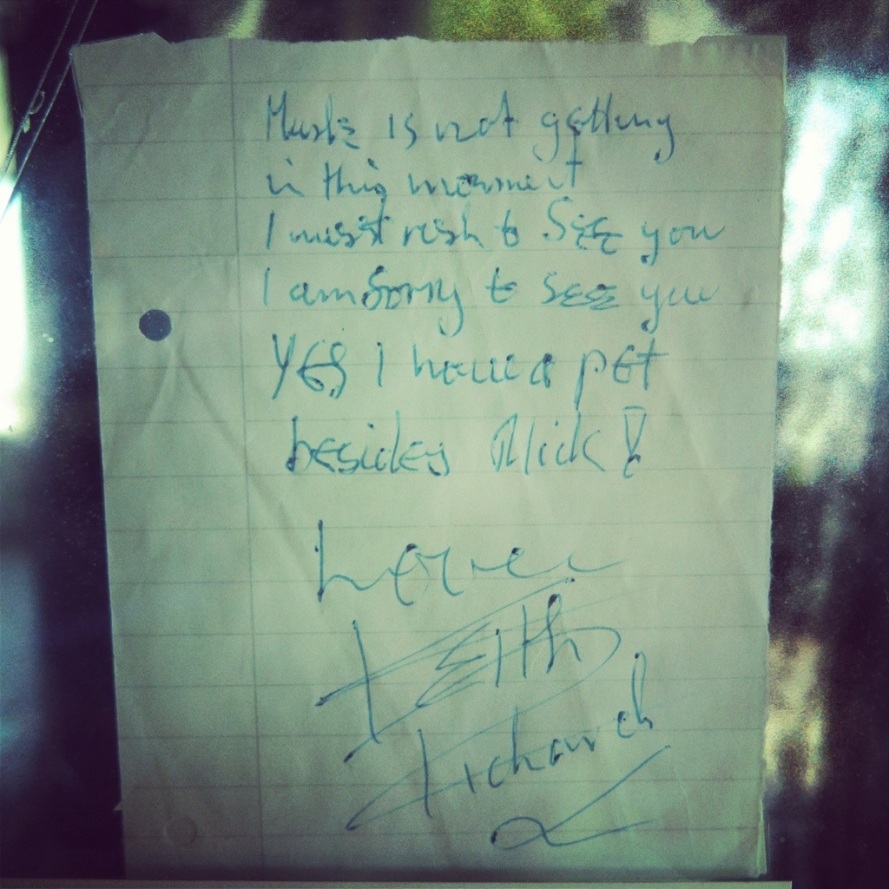 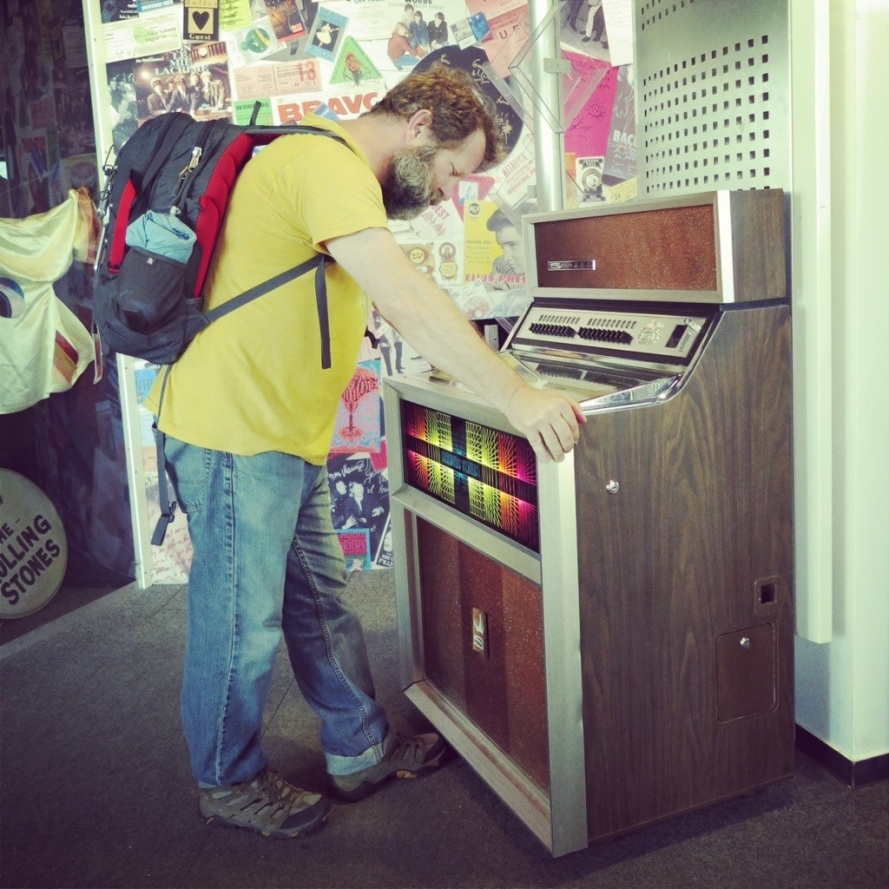 An awesome guest DJ was present today to rock the crowd.

We next visited the Hofbräukeller biergarten, which had been suggested by Jen and Chris, our hosts in Munich. It was a proper biergarten, and we each cancelled out a couple of liters of beer. 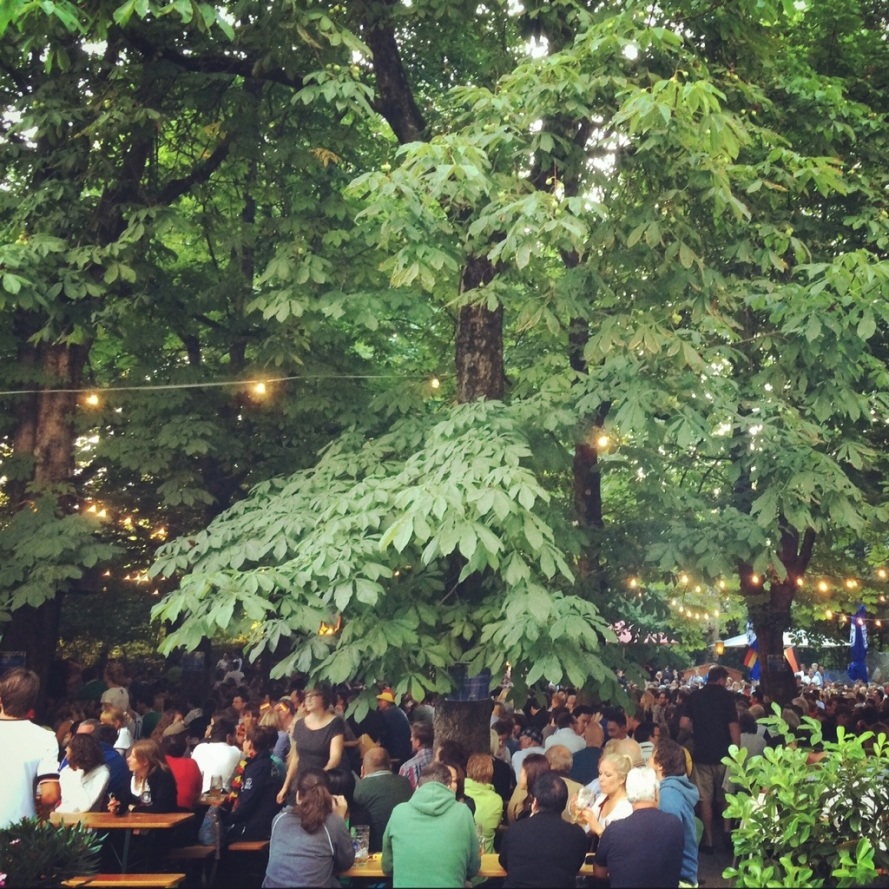 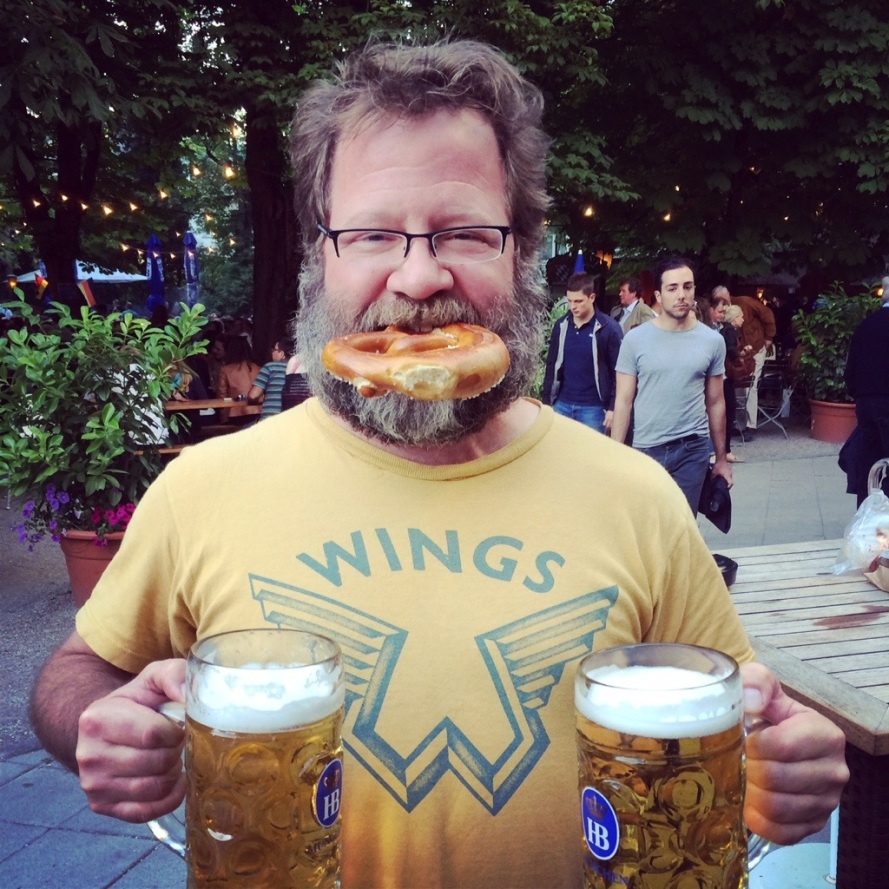 In Europe, it’s hard not to know how much beer you’ve had. Beer is not served in “beers”, as it is in America. It is served in third liters, half liters, and liters. When you are drinking beer by the liter, you have to acknowledge how much beer you have had. Two liters is my reasonable limit. Three liters is doable over an interval. After that, it gets sloppy.

Also, as you know, the folk of Europe are sorta crazy about this little game they call Football. We know it as soccer (you know…juiceboxes, orange slices) in the USA. It’s World Cup time, and the people of Germany are watching this Football thing with gusto. The official outfit of the young man watching Football in Germany is a jersey and the pants-part of lederhosen. That’s a commonly-seen get up. I will say that its refreshing not to be surrounded at World Cup time by Nashville hipsters who are pretending to love soccer.

Tomorrow…some castles or some museums… 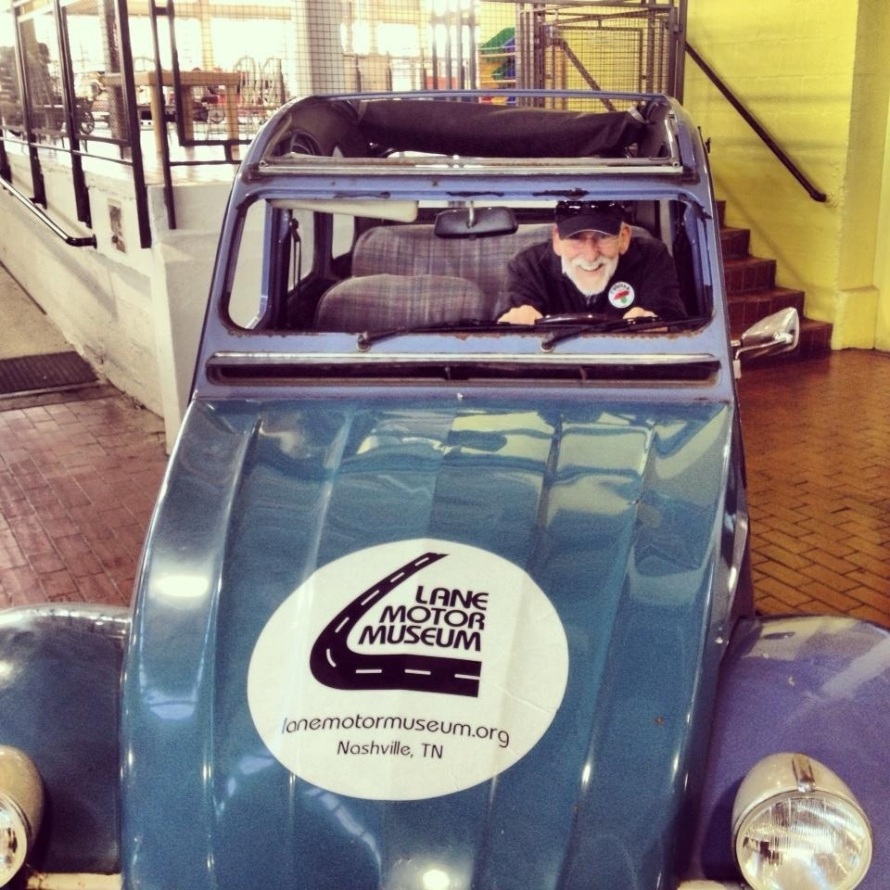 Our dedication of this post goes out to car aficianado, bike fanatic, father of the mighty Bex, and all around awesome guy Geoff Brace. This is Geoff at the Lane Motor Museum in Nashville. When we visited Lane, the guide who was showing us around was so impressed with Geoff’s car knowledge that she offered him a job as a docent right on the spot!