Zurich and Lucerne – The Lion of Lucerne, Sticker-Shock, and Souvenirs!

We arrived in Zurich after 5.5 hours on a train, 1.5 of which were not in the planned itinerary. It was never really clear what caused the delay, all we knew is that it was delayed mid journey…rumors were flying! There was a rather ornery German man who was ‘translating’ the announcements for a young Australian girl and a guy from Miami, but it sounded like he was raising up the stakes just a little. “We all may have to get on another train…we might be stranded here…” was the theme, but it turns out we were just 80 minutes late into the city…which is exactly what the announcements had said from the very beginning. There was quite a bit of misinformation being thrown about; the kid from Miami was doing his best to pick up the Aussie by delighting her with amusing tales, one of which was “in America, we say mom instead of mum, like you do. She responded with a “hmmmm.” Not giving up, he started in with “but in the South, they just say coke when they want a soda, even if they are ordering a sprite!” I nearly jumped in, but he was doing such a terrible job of impressing this young lady that any cutting remarks I had planned would’ve only made it worse. I figured he could dig his own hole, he didn’t need any help from me. He pressed her for her contact info, but he only got an email address. That’s never going to happen.

Anyway, we eventually arrived in Zurich and were presented with the following three things, which resulted in Zurich getting an immediate A+.

1. Svensson the dog. He belongs to our host family and couldn’t be more lovely. Yes, we were instantaneously covered in white hair, but it was worth it. 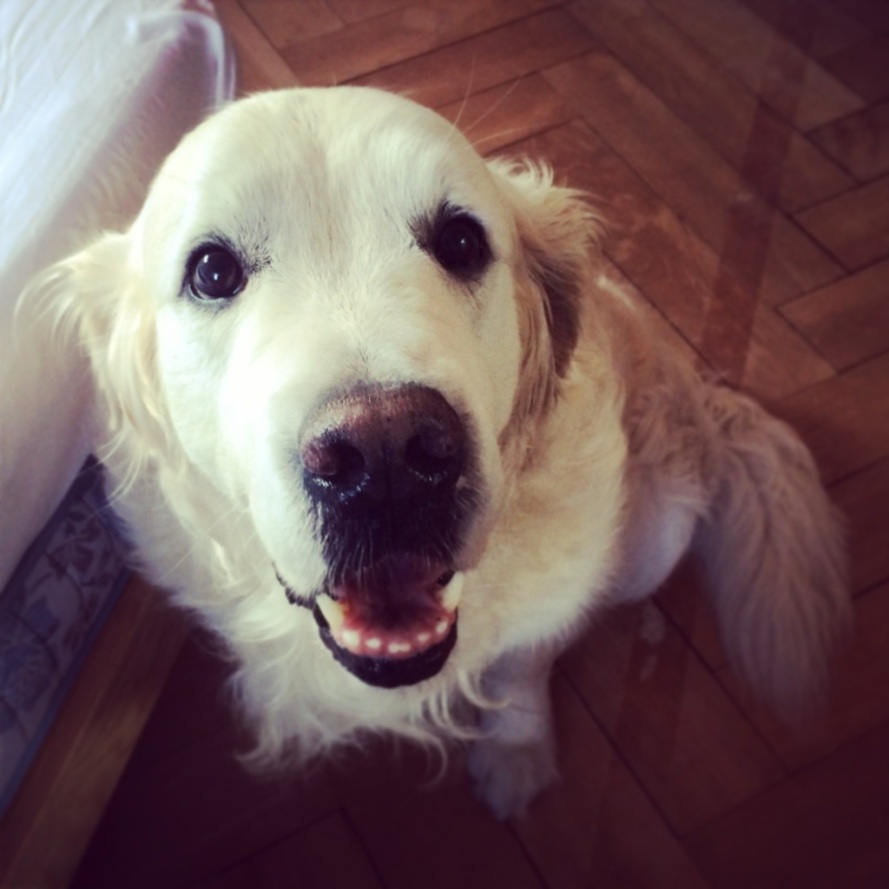 I didn’t think it could be improved upon until the sun set over the Alps. 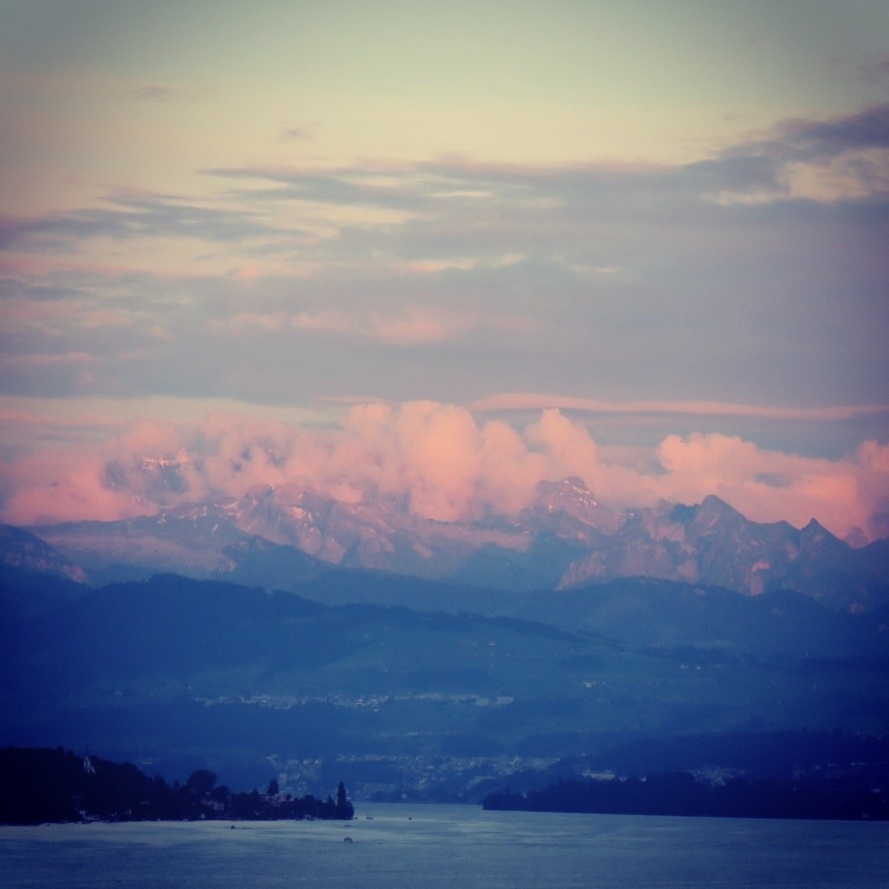 3. This adorable elderly couple playing their Alpenhorns. I wanted to shrink them and take them back to Nashville in our backpacks.

Since we had chopped a fair bit of Switzerland out of the itinerary due to cost (more on that later, we had planned a couple of day trips from Zurich. The first of which was the town of Lucerne. I was lucky to spend some time in Lucerne when I was younger, during a trip to Switzerland with my Girl Guide troupe, of which my mother was the intrepid leader. We spent a couple of weeks in Switzerland, and I have a lot of great memories from the trip: the sound of the cowbells across the valley of Adelboden, the village we stayed in, the chalet in the basin of the alps where the snow came down to our doorstep. My mother may have a different set of memories, as she cracked a couple of ribs and busted her knee on the ice rink in Adelboden, and spent the next few weeks cursing at us for making her laugh.

My fondest memory of our Swiss trip was visiting Lucerne, specifically the Löwendenkmal, so I was very much looking forward to re-tracing my steps. We headed off to the train station to catch the regional line to Lucerne. It’s common knowledge that Switzerland is a shockingly expensive country…but we figured it wouldn’t beat Norway. We were so wrong. It was more cost-effective to buy a $550 month-long rail pass than to book point-to-point tickets for 2 days, covering a distance shorter than Nashville to Memphis. Our modest Thai meal (Pad Thai, curry, a sprite and a beer) cost $75. A Whopper Meal cost $20. When asked to describe his $20 whopper, John said, “average. Like most whoppers, I regretted it instantly.” I shudder to think of what a whole week of cheese would cost. 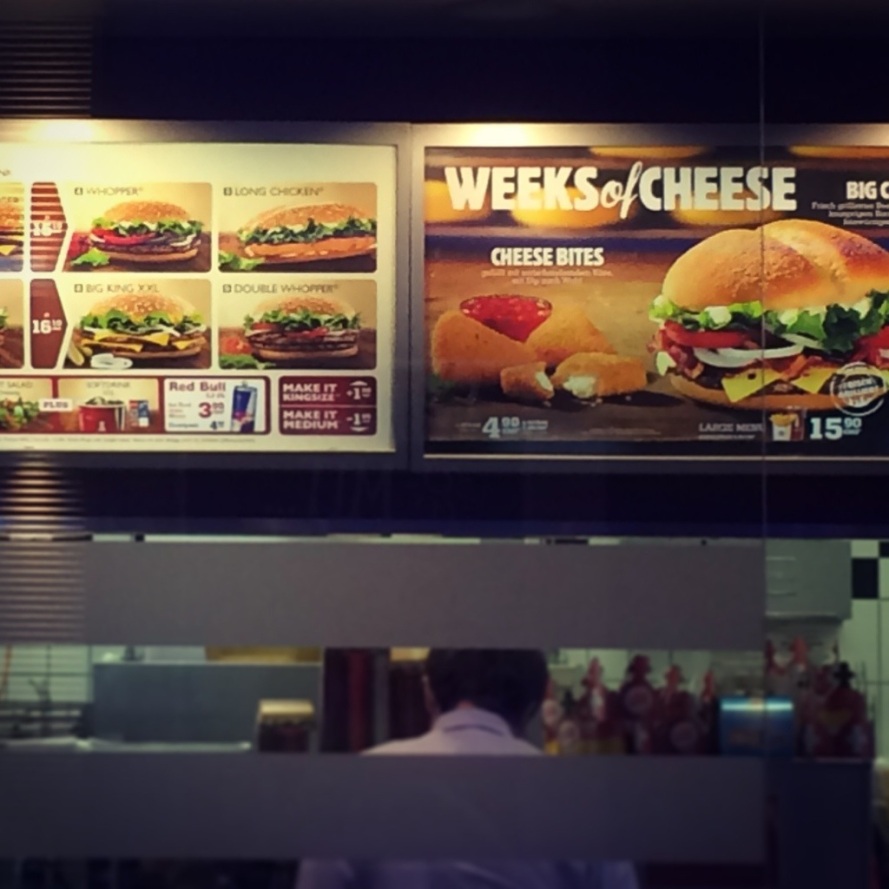 Reeling from our recent purchases, we boarded the snazzy double-decker train to Lucerne.

The town of Lucerne straddles the beautiful Lake Lucerne (what a coincidence) which is approx. 220 meters at it’s deepest point. A river that branches off the lake flows through central Lucerne and a large number of pedestrian bridges connect the old and new towns. The most famous bridge, and one of Lucerne’s most precious sights is the Chapel Bridge.

The Chapel Bridge is a wooden footbridge dating back to the 1300’s. It has suffered a couple of fires, the most recent in 1993, which destroyed some of the beautiful 17th-century paintings which line the interior. It is the oldest wooden covered bridge in Europe, as well as the world’s oldest surviving truss bridge; it delighted me today as much as it did 21 years ago.

After crossing the bridge, we walked through the main shopping street, which winds through the old town. Having searched for weeks for new walking shoes without success, I had resigned myself to wait until we got back to Nashville, avoiding all questionable hikes that my town shoes couldn’t handle. I didn’t even bother checking for Swiss stores, assuming that they would have to take both my arm and leg for payment. Whaddya know? As we walked through the shops, we spied a whole rack of keen shoes on the sidewalk…on sale, no less! My three-week search had come to an end…50% off, sooooo….about the same price I would pay in Nashville. Happy feets!

Caught up in all the consumerism, John bought a swiss army knife. It has been named Pat. 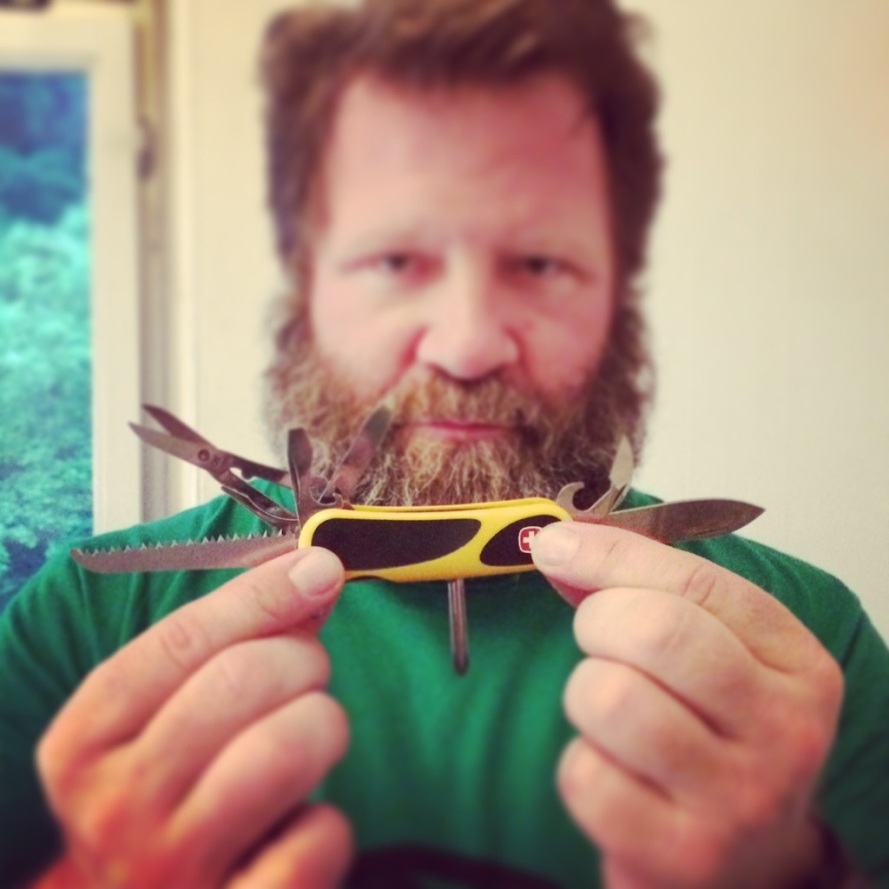 Determined to get our money’s worth out of our Swiss rail pass, we wandered into anything which was free with our purchase. This included the Siftung Bourbaki Panorama painting, the subject of which is the crossing of General Bourbaki’s Eastern French Army over the Swiss border during the German-French war of 1870-1871. It’s 112 meters long by 10 meters tall and is one of the last giant panoramic paintings from the 19th century that has been preserved. The Swiss painter, Edouard Castres, volunteered with the Red Cross during the war. It’s a really wonderful sight, and this is just a fraction of it.

The main reason I wanted to bring John to Lucerne was the Löwendenkmal, or The Lion of Lucerne. This sculpture, dedicated as a memorial to the Swiss Guard who fell during the French Revolution, is carved out of the cliff face. I can honestly say, upon my second viewing of this haunting memorial, the Lion of Lucerne is the most moving sculpture I have ever seen.

The lion is mortally wounded by a spear which still protrudes from it’s shoulder. As he lays dying, the lion continues to protect the French shield, a reference to the Swiss Guard who were protecting the royal palace of Tuileries in Paris when they were massacred by the revolutionaries in 1792.

The Lion lies in his lair in the perpendicular face of a low cliff – for he is carved from the living rock of the cliff. His size is colossal, his attitude is noble. His head is bowed, the broken spear is sticking in his shoulder, his protecting paw rests upon the lillies of France. Vines hang down the cliff and wave in the wind, and a clear stream trickles from above and empties into a pond at the base, and in the smooth surface of the pond the lion is mirrored, among the water lillies.

Around about are green trees and grass. The place is a sheltered, reposeful woodland nook, remote from noise and stir and confusion – and all this is fitting, for lions do die in such places, and not on granite pedestals in public squares fenced with fancy iron railings. The Lion of Lucerne would be impressive anywhere, but nowhere so impressive as where he is. -Mark Twain, A Tramp Abroad

Even though the city noise had definitely penetrated this space, and tour groups chat noisily and take selfies in front of it, the Lion is still an intensely stirring monument, causing both John and I to reflect quietly for a long time. I’m so glad we came here. 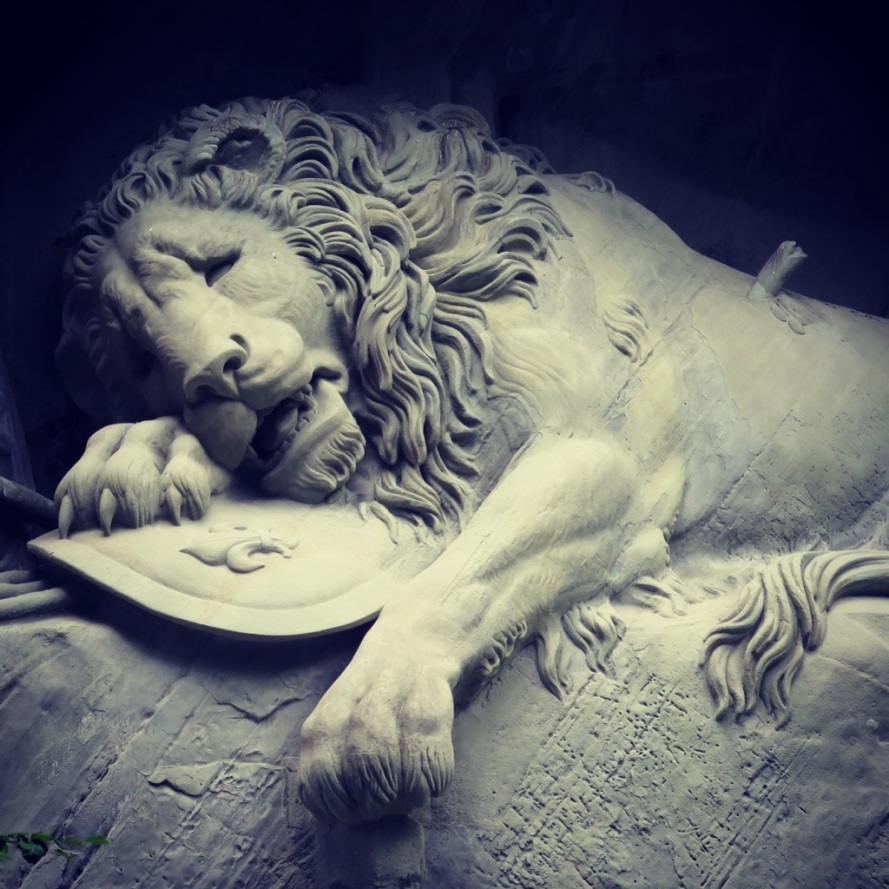 Blinking away the mist in our eyes, we left the Lion and took advantage of free admission to the Glacier Cave Museum. As John put it, it was a museum for people unfamiliar with snow and ice… “hey guys, it freezes and it’s cold. People ski on it! Avalanches are dangerous!” We blew through the main exhibit rather quickly, and got into the goofy stuff: Mirror mazes!

We visited one of these in Prague, and while it was very novel, it wasn’t as disconcerting as this one. You truly couldn’t tell if you were about to walk into a mirror, which I know sounds stupid because the biggest tip would be that you can see yourself in it, it was something to do with the angles at which the mirrors were placed. I wouldn’t want to have to navigate through it in a panic, that’s for sure. At the end, there were various displays centered on optical illusions and mirrors, the best of which allowed you to stick your head in a hole and create a kaleidoscope of your own face. This is definitely going to be my new desktop background.

Speaking of faces…check out this beard! It’s immense and there’s still 9 months to go! 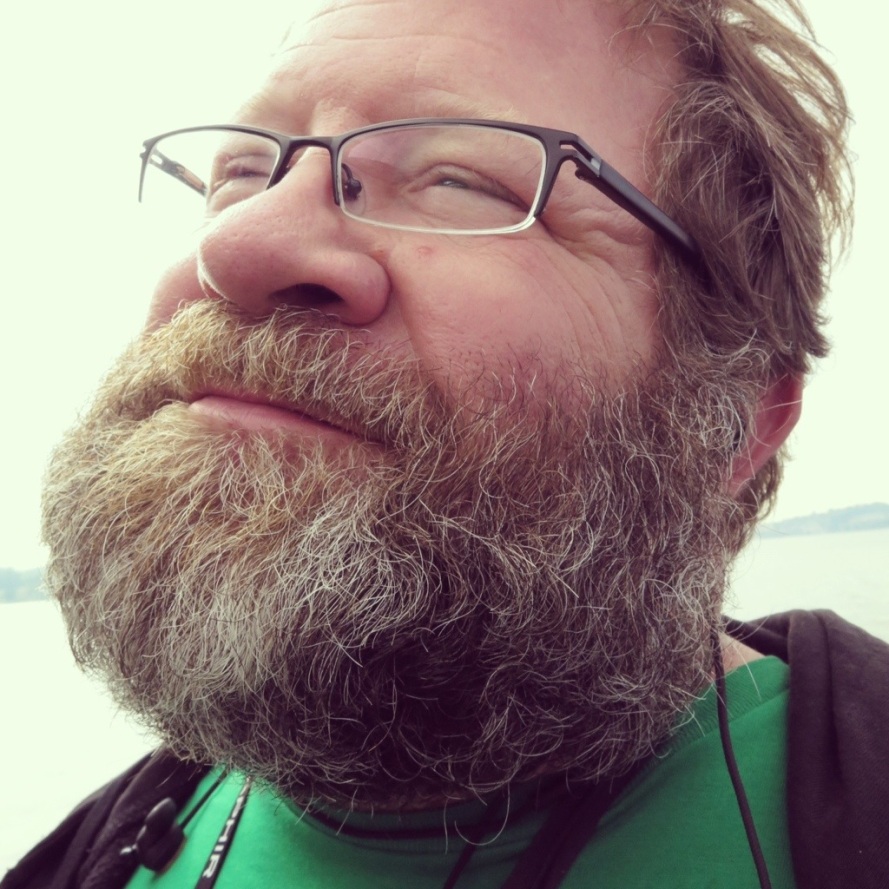 We couldn’t leave Lucerne without noodling around on the lake for a while, so we hopped on an tour boat for a very scenic hour.

After a couple of Hoegaarden beers ($20!!!) we returned to Zurich, and caught up on some good news on the train.

Tomorrow, we take another day trip to Gruyeres, home of the cheese and the H. R. Giger Museum and Bar. You guys might want to strap yourselves in now for a very geeky blog post tomorrow.