Sagrada Família, Barcelona – The Mother of All Churches

Today we visited a site that I have been excited about since we put Barcelona on the itinerary: the Basilica de la Sagrada Família. Of all the amazing churches we have visited on this trip, we saved the best for last. Sagrada Família is considered to be Gaudí’s greatest creations, it’s certainly his most ambitious. He dedicated 43 years to the Basilica, until his death, when he was run over by a tram upon leaving the building site. Work began on the site in the 1880’s and the full structure is scheduled for completion in, wait for it…2026. 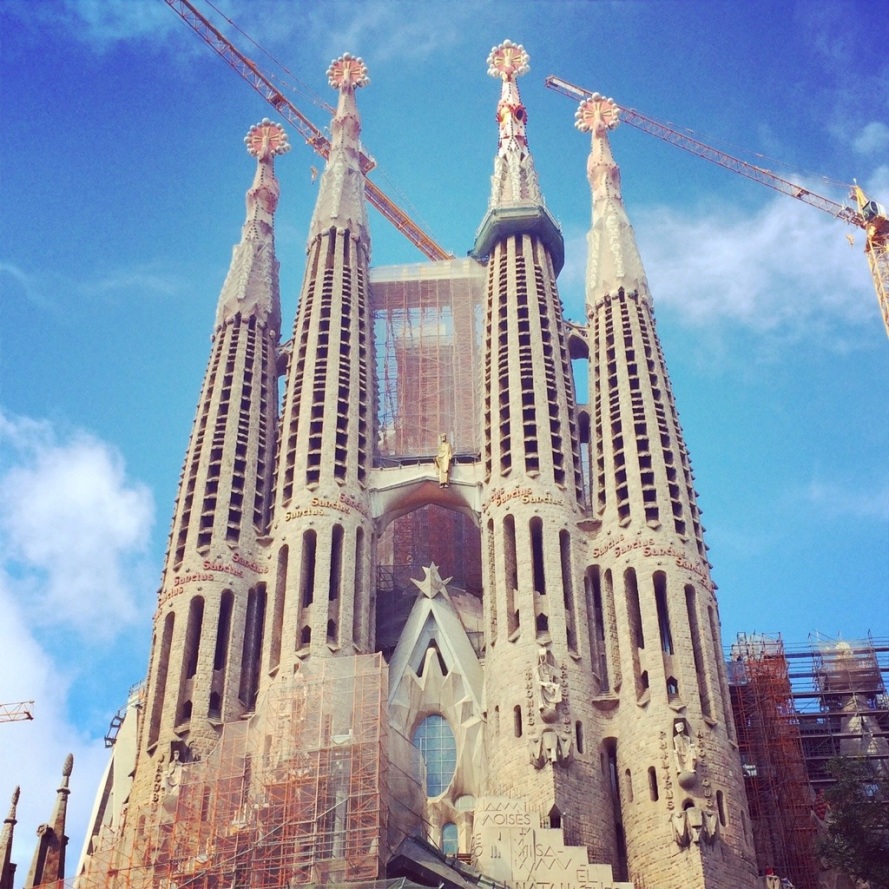 The exterior is incredibly detailed; there’s meaning in every square inch of stone on the facade. The design is largely botanic in nature, the pinnacles on the apse walls are all grasses and stalks of wheat. The interior columns are designed to give the appearance of trees, making you feel as though you are walking through a huge stone forest. Instead of the mystical beasts that adorn most Gothic cathedrals, the gargoyles of the Sagrada Família are reptiles, farm animals, amphibians and snails. The whole place feels alive.

It’s breathtaking…the experience is very hard to put into words. I could list a bunch of facts, but you are big boys and girls, and can read up on Wikipedia if you want. The pictures don’t do it justice. It’s incredible. To my surprise, I ended up having a quiet little cry in a chapel. 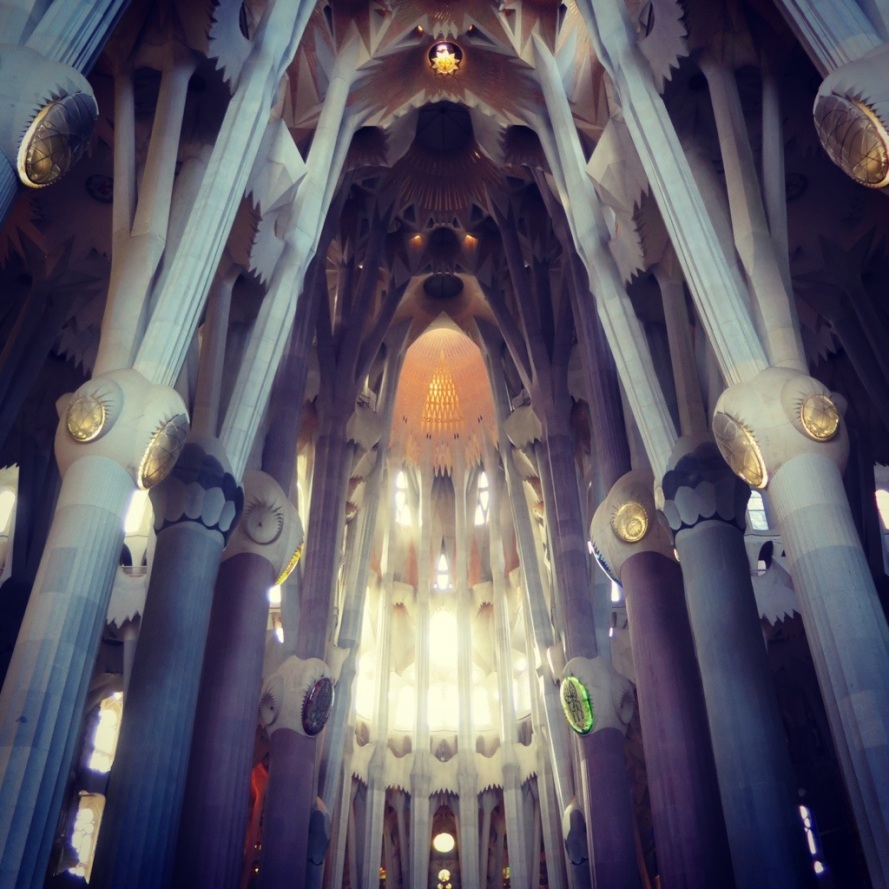 Included in our admission was a trip to the Nativity towers. A small bridge connects two of the towers, and the view over the city is remarkable. 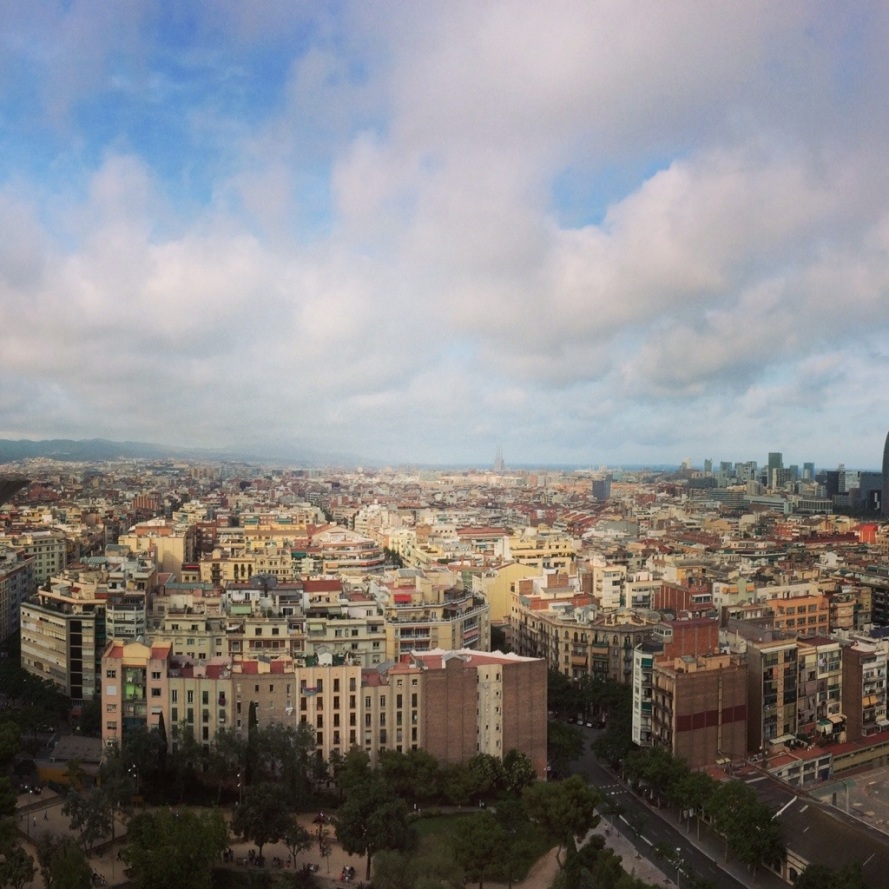 You take an elevator to the top, but you descend via a dizzying spiral staircase that seems to go down for miles.

Of the two completed facades, we visited the Nativity facade first. 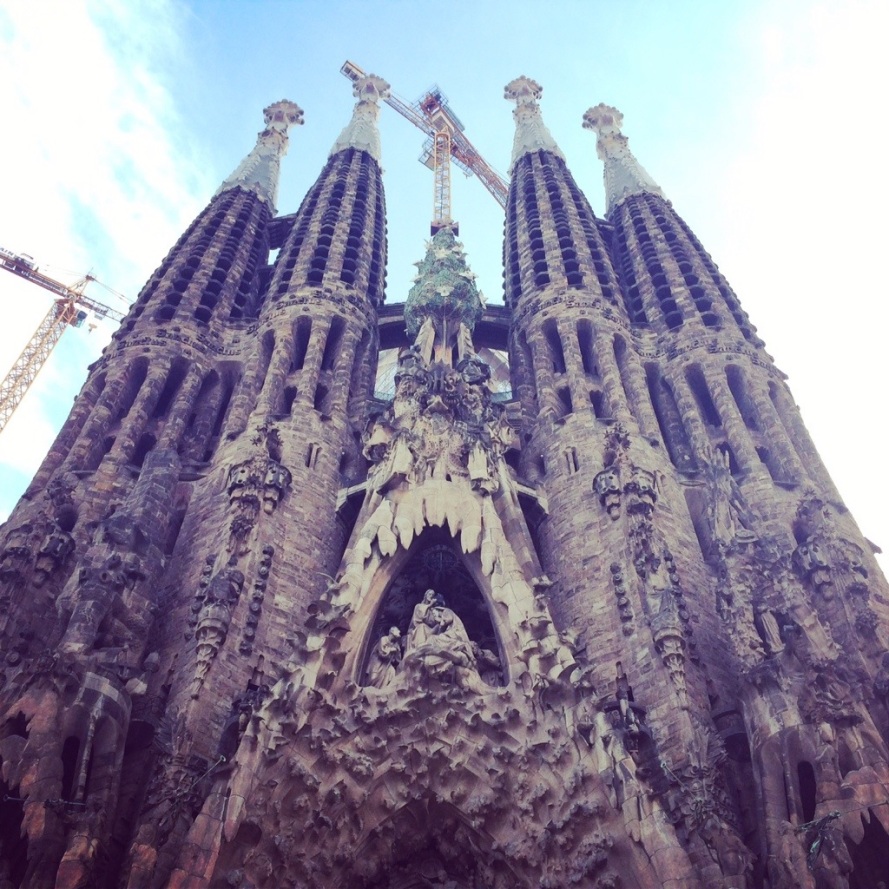 It’s so incredibly detailed, you could spend hours pouring over the scenes and figures. To produce many of the sculptures of people, both inside and outside, Gaudí made casts of faces of the people working on the cathedral, and of the children, women and men who died in the Hospital de la Santa Creu. He took several photographs of each from different angles, using mirrors. What’s even more astounding is that Gaudí calculated the degree of distortion involved, depending on the height from the ground that each would be situated, so that they would all appear or natural size when seen from the ground.

The Navity side was built first, as Gaudí knew in order to keep the project funded, the population would need a bit of encouragement…he knew that the project would last beyond his lifetime. The opposite side of the Basilica is the Passion facade, which is much more dramatic; it grimly illustrates the last week of Christ’s life. Gaudí did not live to see the Passion built, in fact the sculptures that make up the facade weren’t designed until 1988 by Joseph Maria Subirachs.

I bought my first souvenir at the gift shop: a book that describes the design and meaning of all the elements of the basilica in great detail. We spent about 3.5 hours visiting the Basilica, but if I had been armed with this book when I arrived, we would probably still be there. It’s mind boggling to think how much thought has been put into this place…I can’t say it enough…it’s absolutely incredible.

However, not everyone agrees with me. Sagrada Família is Barcelona’s most visited landmark, and it’s not a hit with all of the folks that walk through it’s door. What follows is a collection of my favorite ‘terrible!’ reviews on Tripadvisor. I used to read craiglist’s Missed Connections for laughs…now, I will turn to the Tripadvisor review pages.

Disneyland – It is a building without soul. We stood in line for an hour in the sun.

Just to expensive – To pay about 15€ for nothing inside is to much. Great from outside, but no need to enter!

Never ending scam – I have never thought a catholic church could be so subject of pure mercantilism like in this case. A Jesuschrist hangs from the ceiling as it would a chandelier, the columns are plagued with what it looks like crystal eyes.

Embarrassing – Crazy mindless brainwash that has so many ooohing and aaahhing at the ugly mess – the emperor has no clothes.

Depressed and disgusted feeling – Architecture was too stange, Grotesque sculptures are intentionally ugly and walls look like a bad dream of science-fiction film director. This was worst experience in Barcelona. (These guys should definitely go to the Giger Museum)

I don’t get it – Real cathedrals are stone. This is just some kind of self-indulgent weirdness. By 2500 it will look dated and silly like bell bottoms or tie die.

What a waste of time – Worth 10 minutes max.