We spent today in grimy, bustling San José. It’s a lot different than being out in the rainforests, where we have spent most of the the last two weeks.

Out in the jungle it’s all peace and love and foliage and sloths and tucans and scorpions. In the country, there are big bugs, bigger rains, and huge hearts. Here in San José, it’s all honking car horns, city pollution, and constant vigilance against thieves (picky pocky, as our Czech friend Irenka taught us).

Ah, but how did we get from the jungle to San José? Well, that’s a story worth telling.

It’s funny. It’s not even that far between Santa Elana and San José. About 100 miles is all it is. Should be easy to get from point A to point D, eh? Well, it seems like that to you and me because we have been spoiled all our lives by western infrastructure like paved roads. Toss a couple of long gravel roads into the mountains, and then make it rain like hell every afternoon for a few hours. Now how long does it take to get there?

In our case, about 5 hours. The first bit, coming out of Monteverde, involved one hell of a lot of scary driving on dirt and gravel roads through the mountains. It takes about an hour before you even get onto asphalt, and it seems like a lot longer. Folks, this is a mountain range, and it is stunningly beautiful. It also seems stunningly dangerous. Through that mountain range, imagine a road like you might find in any mountain range in the USA. Except this road is made not of paved asphalt, but rather alternates between hard packed dirt and a combination of dirt and coarse limestone gravel. And this road, rather than being consistently some number greater than 2 car-widths across, varies from 1+ car widths across to 3 car widths. There doesn’t seem to be much rhyme or reason to how wide the road is, except perhaps how difficult it might have been to carve it outta the side of the mountain. That is to say, the narrow bits seem to come at the most inopportune times, perhaps when another vehicle is approaching on the other side, on a curve. These roads generally don’t have a guard rail nor much of a shoulder, despite the fact that they tend to feature breathtaking drops on the down-the-mountain side. Getting the picture?

I was reminded as we rode along of this movie that I saw as a kid. It’s called Sorcerer, and I remember it involving lots of long shots of nerve-ravaging driving in the rain, with heavy vehicles traversing impossible Central American roads. 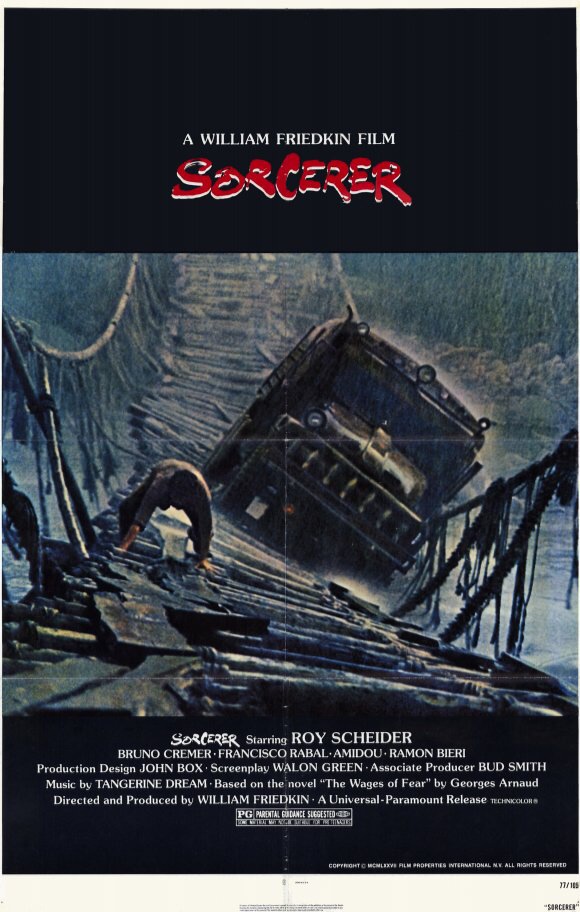 This is the image that kept coming to mind as we were riding in our bus.

After 20 or 30 minutes of driving along, mostly climbing switchbacks up, up, up in low gear across this bumpy terrain, we had finally gathered some speed during a brief descent. I was occupying the window seat and was watching with grim fascination as the rear wheels underneath my window would occasionally find their way precipitously close to the road’s edge. Bex was sitting in the aisle seat and trying not to watch, I think. I kept remembering about occasional news stories that I would see back in the US about a bus going off the side of a hill in South America. These stories are always buried in US news feeds, and other than the headline I rarely read them. I was thinking about the possibility that we were going to be part of such a story.

Suddenly the bus was braking hard in the gravel. The brakes were locked, or maybe were doing their automated ABS dance. I looked up and saw that we were skidding toward a blind hairpin right angle on the narrow road. Straight ahead was the nothingness of going off the cliff. Barely peeking around the corner of that tight blind turn was the front a big truck; it’s cab was equally as tall and wide as the front of our fully packed bus. As we slowed and the oncoming truck continued to reveal itself (although it was also braking hard), I saw that it was a tanker truck. A tanker truck…full of gasoline. Inflamable it said, right on the side, right alongside the familiar cartoon fire symbol. Yep. That almost happened. If we had left the bus depot two seconds sooner than we did…KA-BLOOOWIE.

That got the old adrenaline going. This Costa Rica trip so far has been a lot of peaceful chilling out punctuated with moments of extreme terror.

A little later on in the journey we encountered a 10-man work crew with heavy machinery in the road. At first, I thought maybe they were widening the road, which is both advisable and commendable. But after a few moments looking over their working conditions, their equipment, and the surrounding area, it is equally probable that they were just cleaning up after a horrible rock slide accident. There were giant boulders everywhere, including in the road itself.

After about an hour of this sorta stuff, we finally reached some blacktop. I thought it was gonna get safer. I was so wrong.

Our driver, who no doubt has balls the size of fists and with the consistency and appearance of polished brass, decided to make up for time lost in all those switchbacks and blind curves. He pushed that bus down the winding paved mountain road like a racecar driver trying to win his first major. He acted as if the double-yellow stripes were guiding him like an electric toy slot car. That is to say, he straddled them. That guy has nerves of steel. He did not grow up in the country, I am certain of that. This man originated from some hellish proving ground in San José. I kept thinking: I guess in the case of a head-on collision it is slightly better to be in the back of the bus. As a airplane-driving friend of mine used to say to me, pilots are always the first ones to the scene of an accident.

It was an exciting ride, I’ll give ya that. Although we were too terrified to take any pictures.

Eventually, we made our way to San José and our hostel there. After living in relative luxury and comfort in the jungle for a couple of weeks, we are in a hostel in the heart of a city. The suicide shower is back with a vengeance. 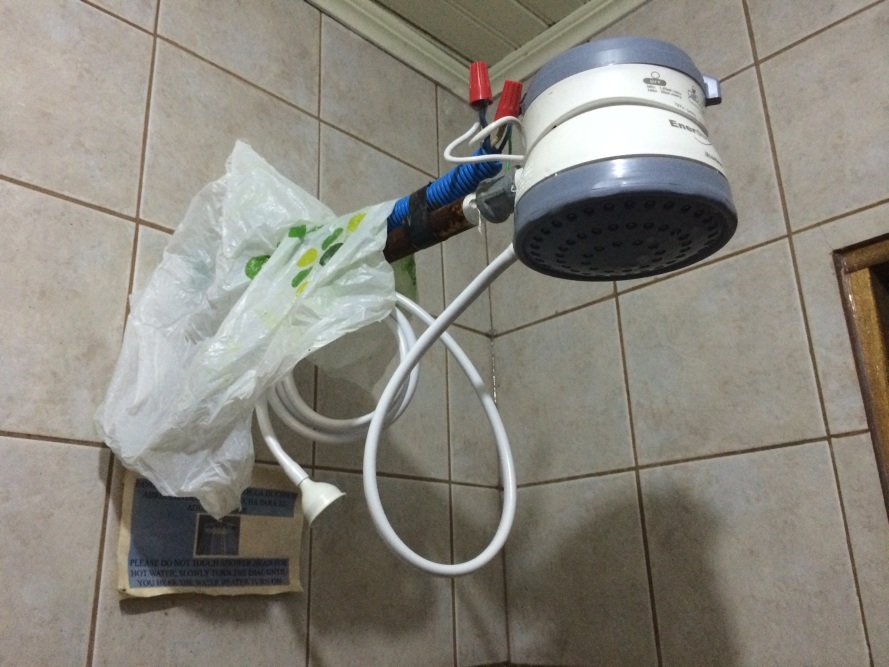 I am amused by the juxtaposition: in-your-face acknowledgement of danger is suggested by the wiring nuts, offset by the impotent reassurance that is being attempted with the plastic bag.

San José is the capital of Costa Rica and has about 2 million inhabitants. It has a feel of grit and danger about it. Not a cool danger vibe like New York either. Just sorta dirty and dangerous. Picky pockies. Police cars relentlessly roaring past with their lights on. Constant vigilance when crossing the road; pedestrians never have the right of way in San José. Every door and window has metal bars; every yard is fenced. I’ve seen a lot of razor wire on top of those fences too.

The highlight of our first full day in San José was visiting the Pre-Columbian Gold Museum. It is well guarded. This museum contains about 1600 gold artifacts dating as far back at the sixth century AD. Their most recent artifacts date from around 1500, when Spaniards and other Europeans showed up and crashed all of the indigenous civilizations.

The indigenous people of South America, Panama, and Costa Rica had their hands on a lot of gold and were good at working with it. It was worn for decoration, used in tools, and also used by religious leaders and medical professionals. Often, gold artifacts in the shape of animals were used by shamans during ceremonies to heal the sick.

Gold jewelry, tools, and art were rendered by skilled goldsmiths either by direct handling (with hammers and other tools), or for the more involved pieces, by casting. Gold casting involved making original models with beeswax, forming molds around this beeswax using liquid clay, and finally casting the hardened clay molds with molten gold. The gold was heated to approximately 1000C in order to cast it.

Check out these animals and other figures, made using this casting process. 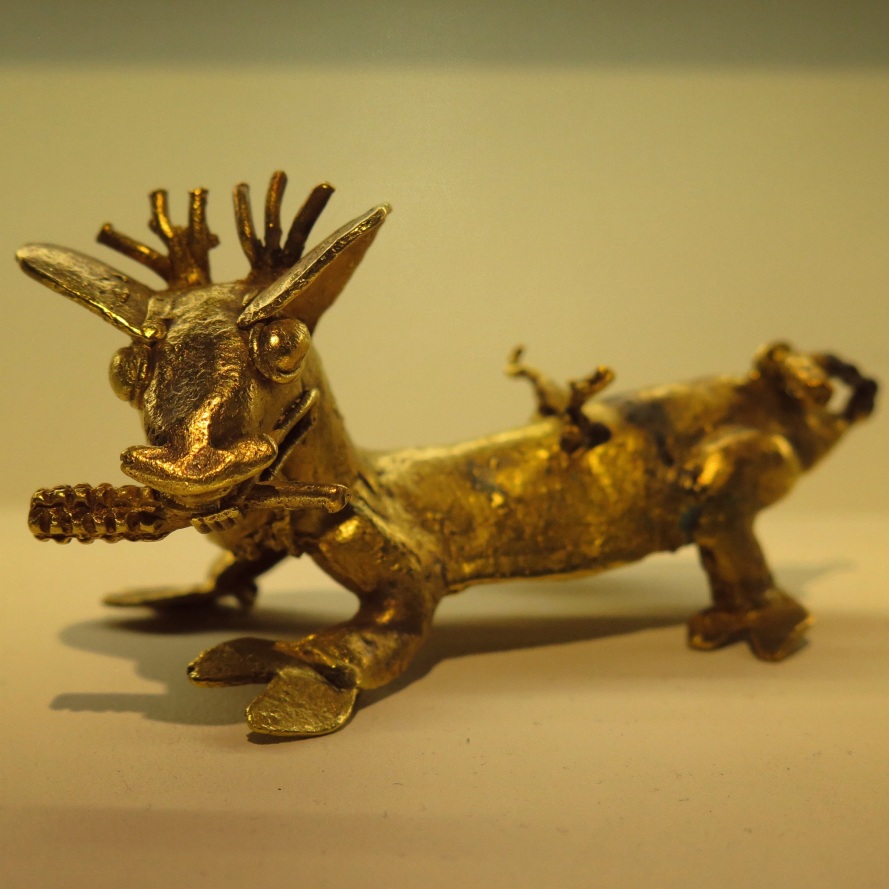 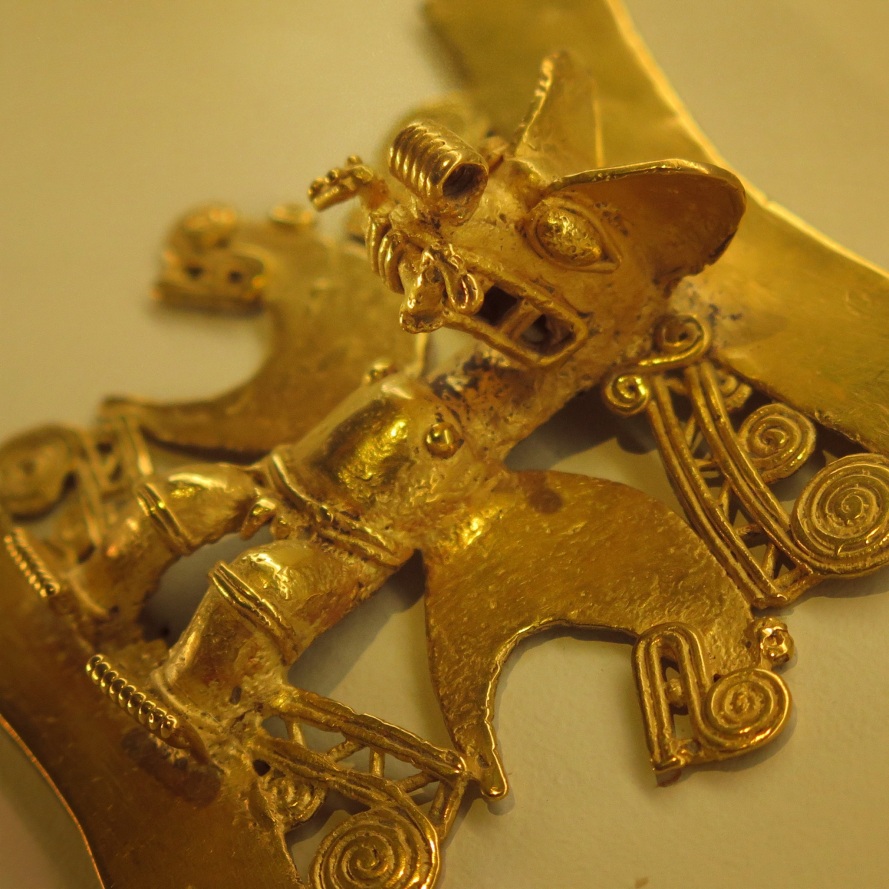 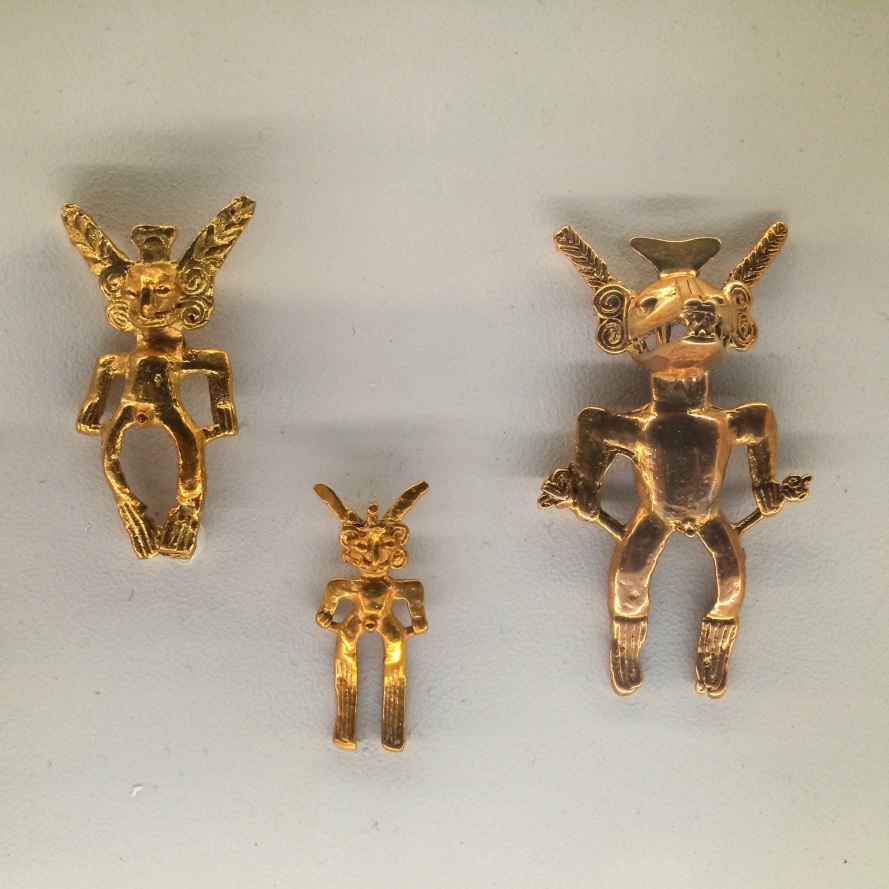 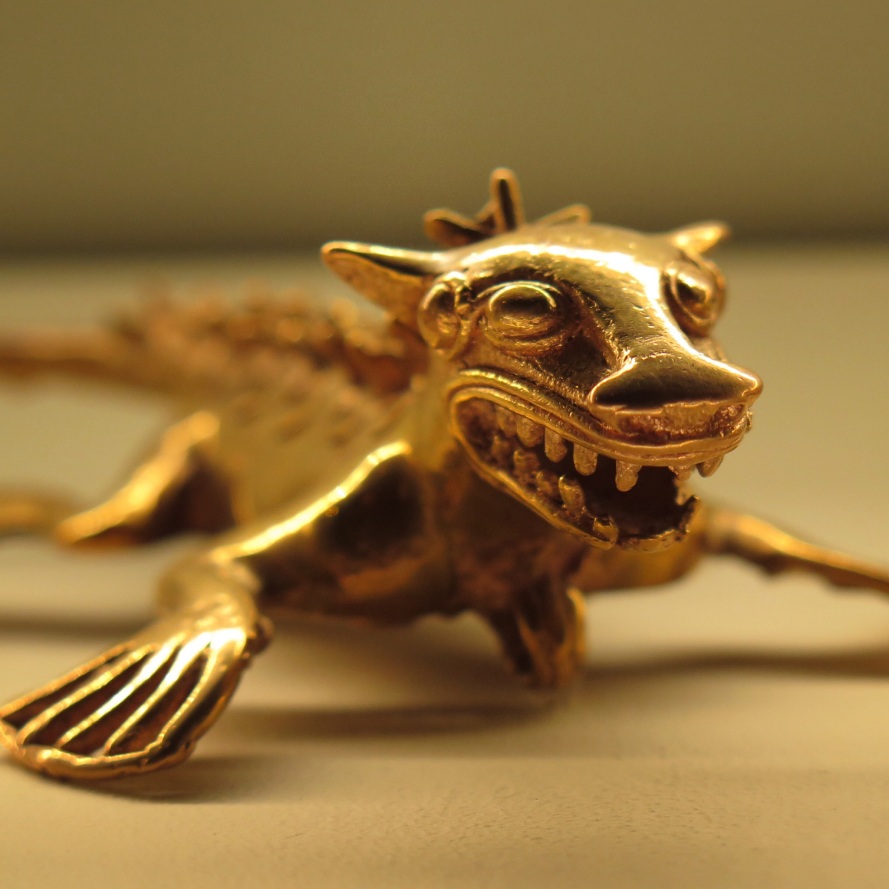 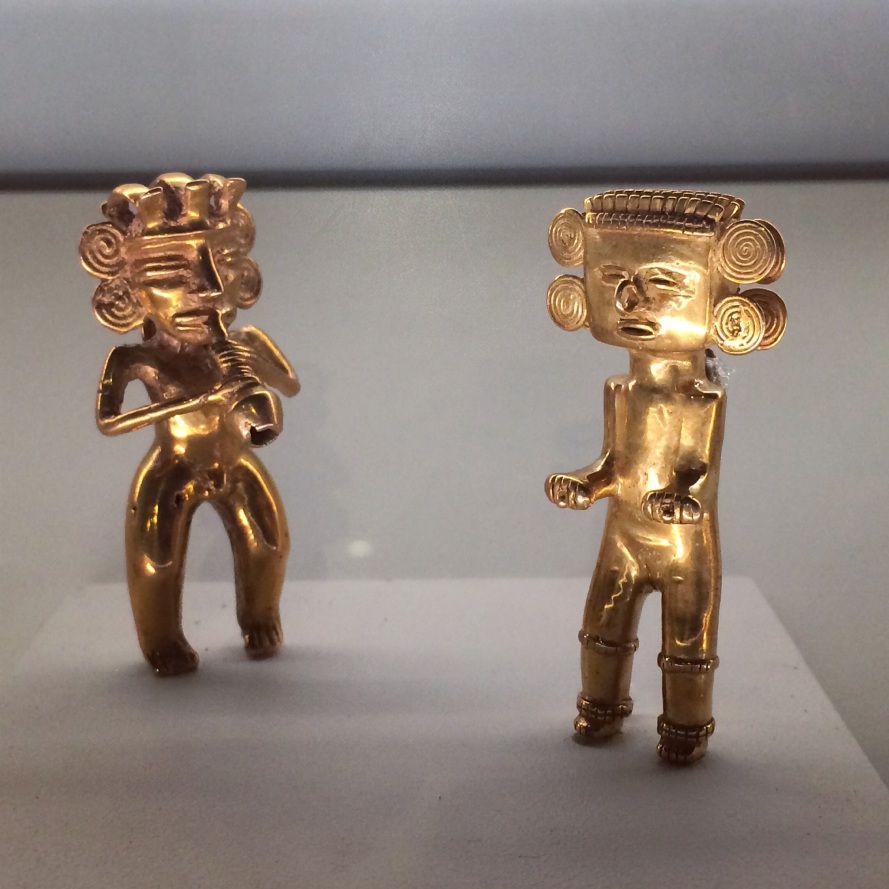 You go into the gold museum to see cool gold stuff, and while you are in there looking at that, they sneak up on you with some knowledge of the people and culture. One interesting thing that I learned was about the burial practices of the indigenous people of Costa Rica. Upon death, bodies were covered in leaves and placed into a wooden box that lay on the surface of the ground in the wilderness. The box was secured against large predators, but allowed natural decomposition due to rain, bacteria, insects, and other small animals.

After one year, the decomposition process would be mostly complete. The bones would be recovered and cleaned. They would be bound in a bag and hung near the family home. A funeral ceremony would occur, setting off a two week feast, complete with food and chicha (an intoxicating beverage made from fermented corn) [note to self: find and imbibe some chicha before leaving Costa Rica]. Pretty cool, eh? Two week party. That’s a pretty good way to be remembered, I think.

We also visited the pneumismatic museum in the same building…no, we aren’t sick, that’s money yo. The history of coins and bills in this country is WAY too complicated to get into here, suffice it to say that the current form of currency, the colón, has been around since 1896. And today was the first day that I noticed that a sloth appears on the 10,000 colónes note. So we will be keeping one of those and bringing it back home for a place on the fridge. Don’t get too excited, 10,000 colónes is only worth about 20 bucks. 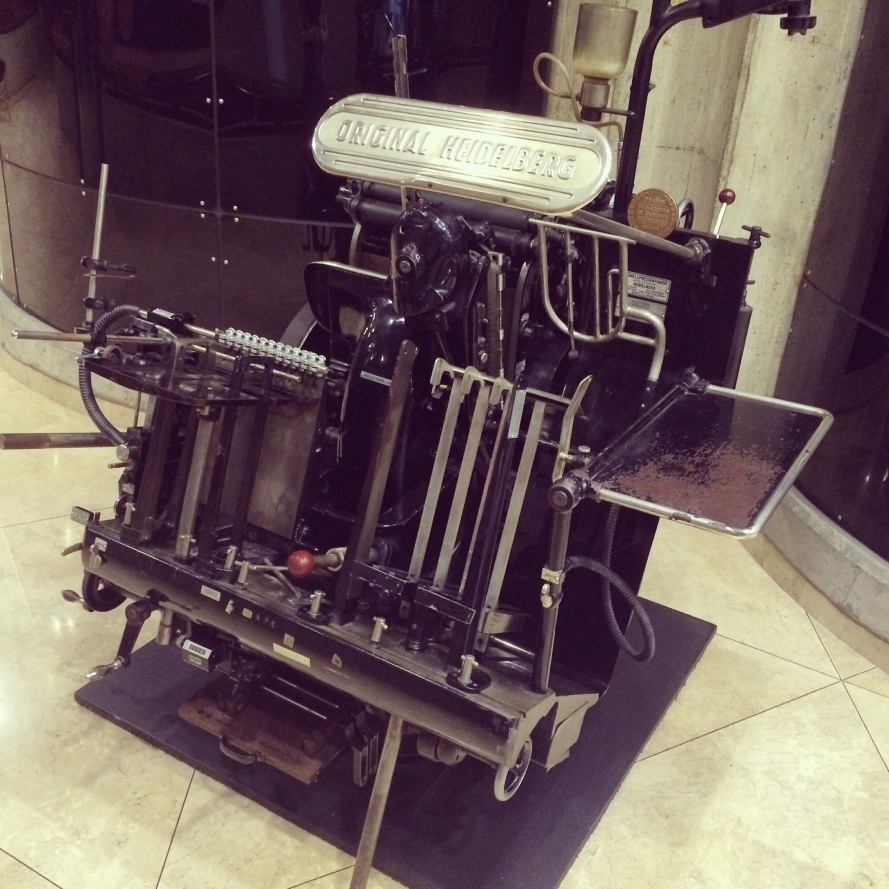 And this is how they print those. A Heidelberg press.

This last bit is a little unsavory, but I’m gonna tell it anyway. We stopped off an an Internet cafe to get something printed out. It was just a form that had to be filled out and faxed back someplace, if you can believe that. PEOPLE STILL FAX. Anyway, we went into this Internet cafe, and all of the computers were in little tiny private booths. Like peepshow booths. And then it occurred to me what was going on in those little booths. Like peepshow booths. We printed our form and got the hell out of there, disinfecting our hands as we walked down the street. DO NOT take a black light in there.

It rained Biblically in the city today, just as it did almost every day in the country. I think San José needed the wash. 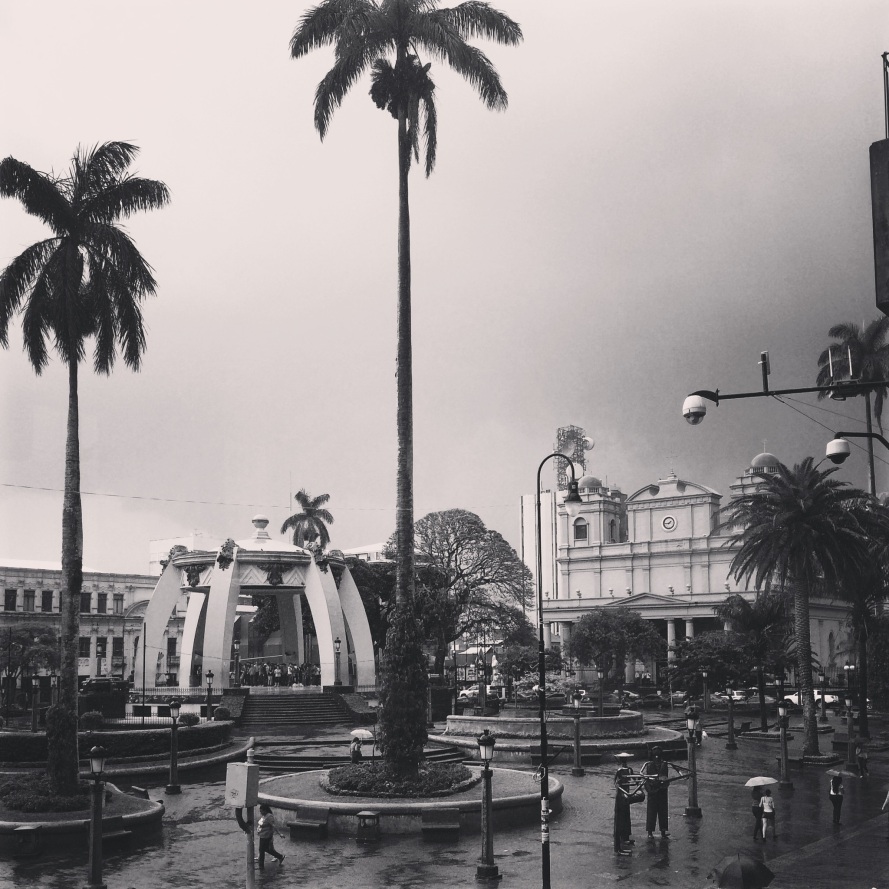 This photo was taken right after we got our daily dose of agua from the heavens. 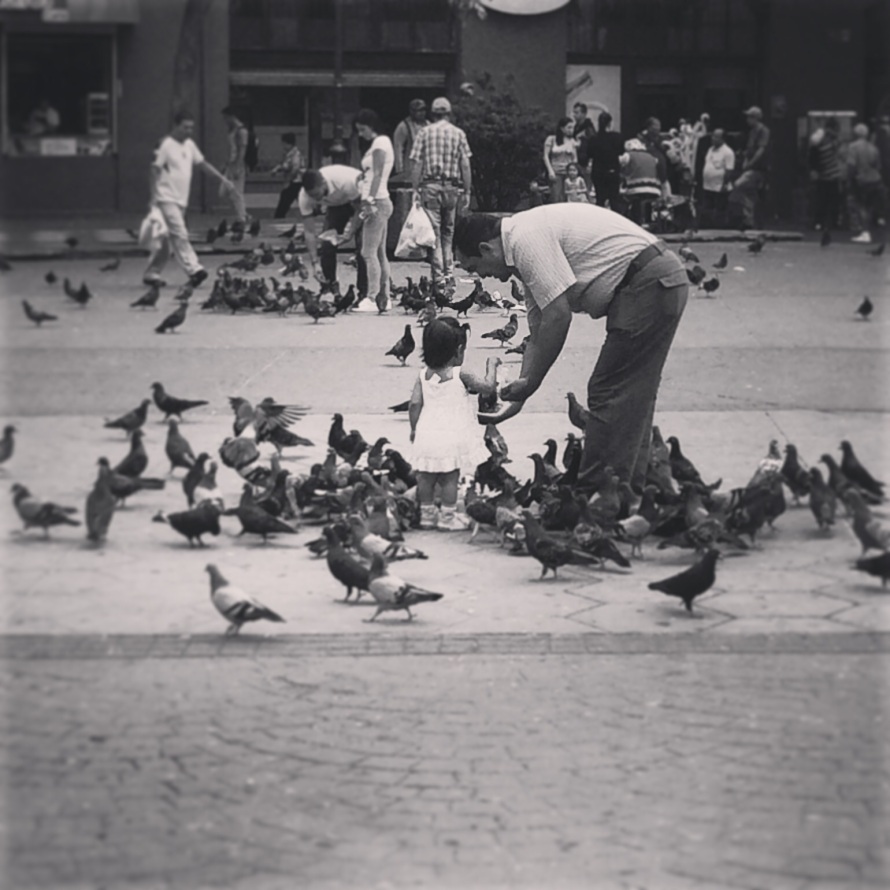 After it cleared, we saw this little girl feeding about 500 pigeons. 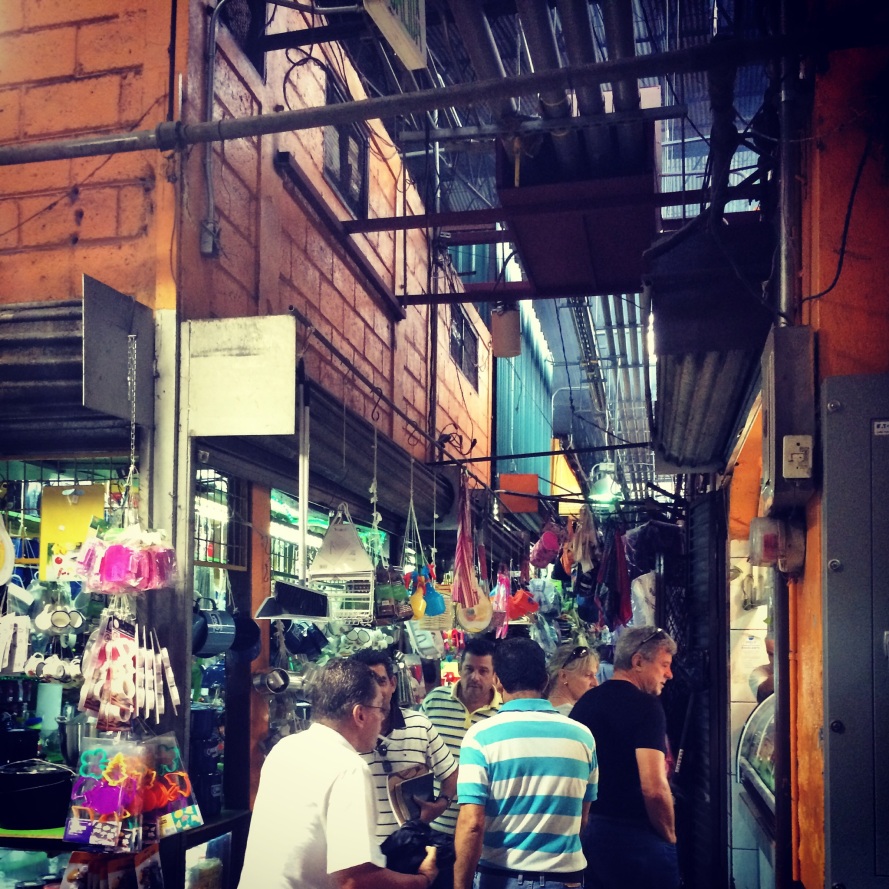 This market was like a maze, crammed full of people, food, and products.