Folks, the day that we have both been waiting for since this trip was first envisioned finally arrived today. We visited the Sloth Sanctuary. We met the sloths!!! 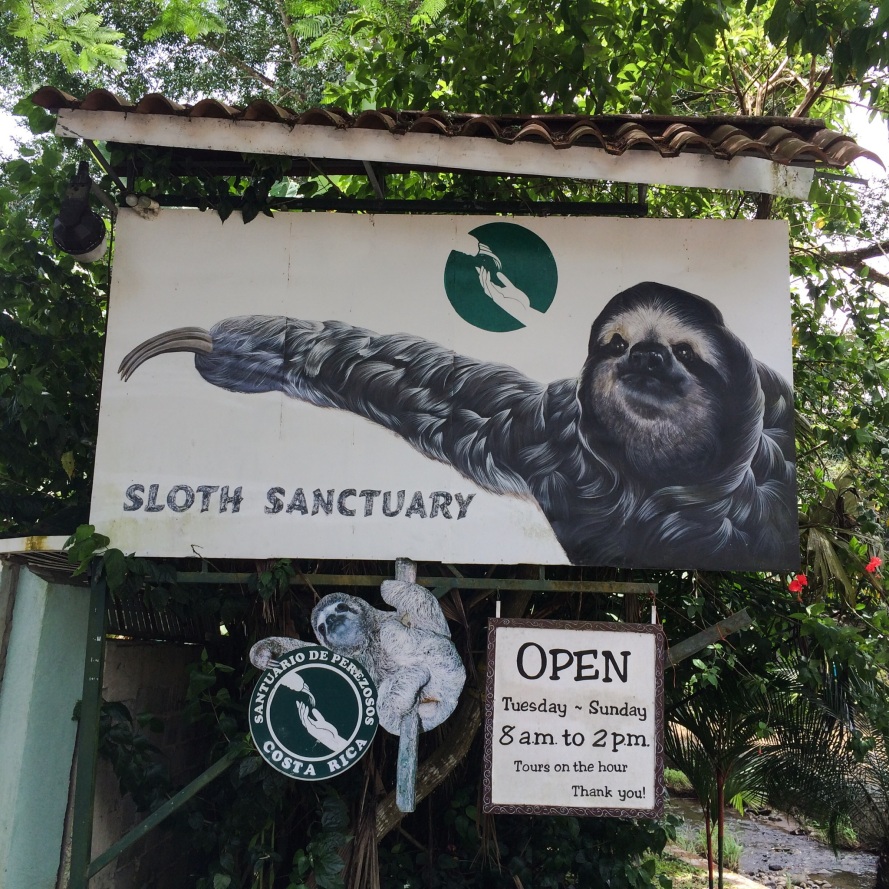 Perezoso is Spanish for lazy. It’s a misnomer: they are relatively active, they are just…deliberate. 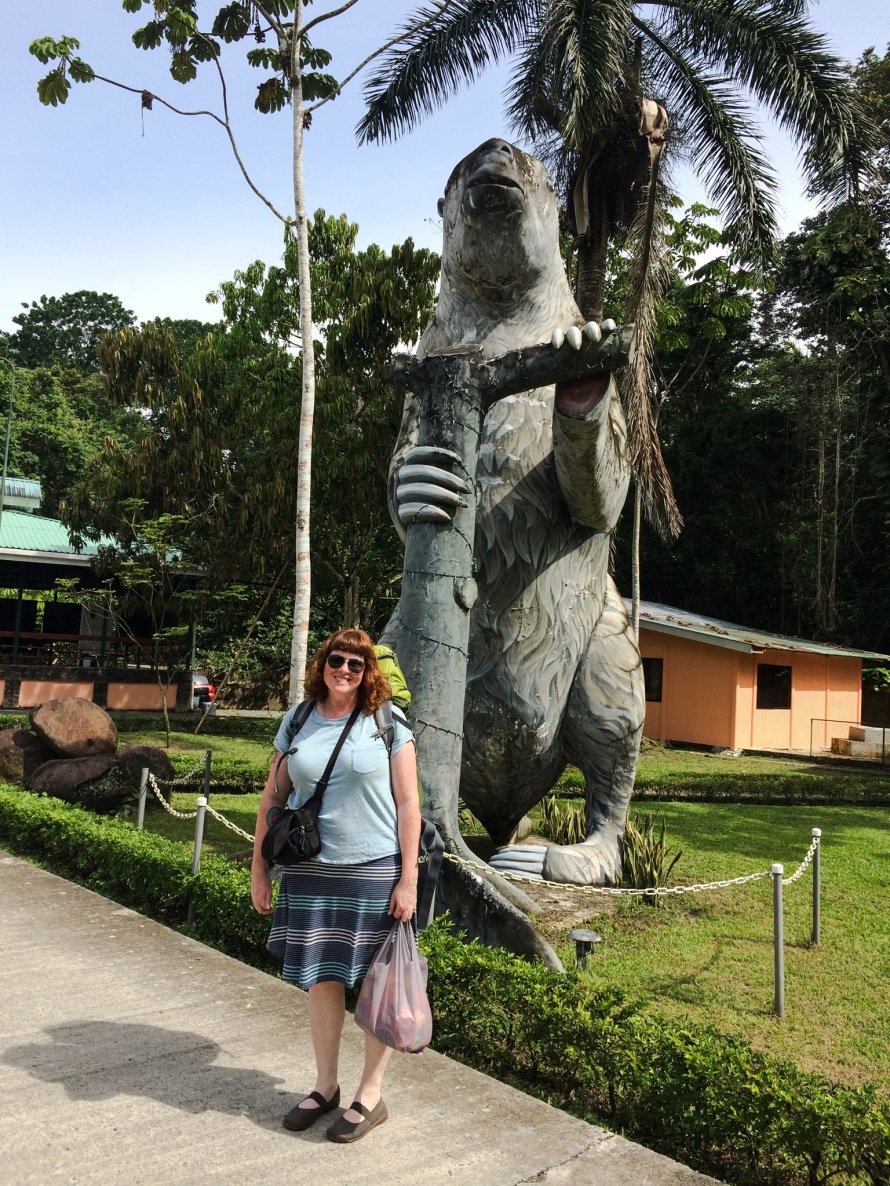 Of course, one does not just meet sloths. One builds up to meeting sloths. It began as all things natural begin in Costa Rica. That is to say, it began exceedingly early. I first heard the howler monkeys at about 0430, but I was advised later by one of our hosts that all that monkeying around actually started around 0330. A troop of howler monkeys was marking territory. It sounded to me like several competing troops. When a troop howls, it sounds like the roar of the crowd from a far-away football stadium, after the quarterback has been sacked and the guy doing the sack dance is named Bruce. The howling started before the sun came up, and it went on all day. The sun is down now and I still hear it.

Sloth-time started during breakfast. We were anticipating a sloth-filled day, and we got one. The first sloth we met is a lovely female named Buttercup. Buttercup is the mascot and ambassador of the Sloth Sanctuary. She’s a 22-year-old resident sloth who is quite social. She cannot be re-released into the wild, so she literally hangs out and meets all of the sanctuary’s guests. Like most females, she immediately developed a huge crush on me (or maybe it was on Oathkeeper), and I on her as well. Although Buttercup is roped off in order to be slightly out of the reach of visitors, she kept reaching out to try to touch my beard. 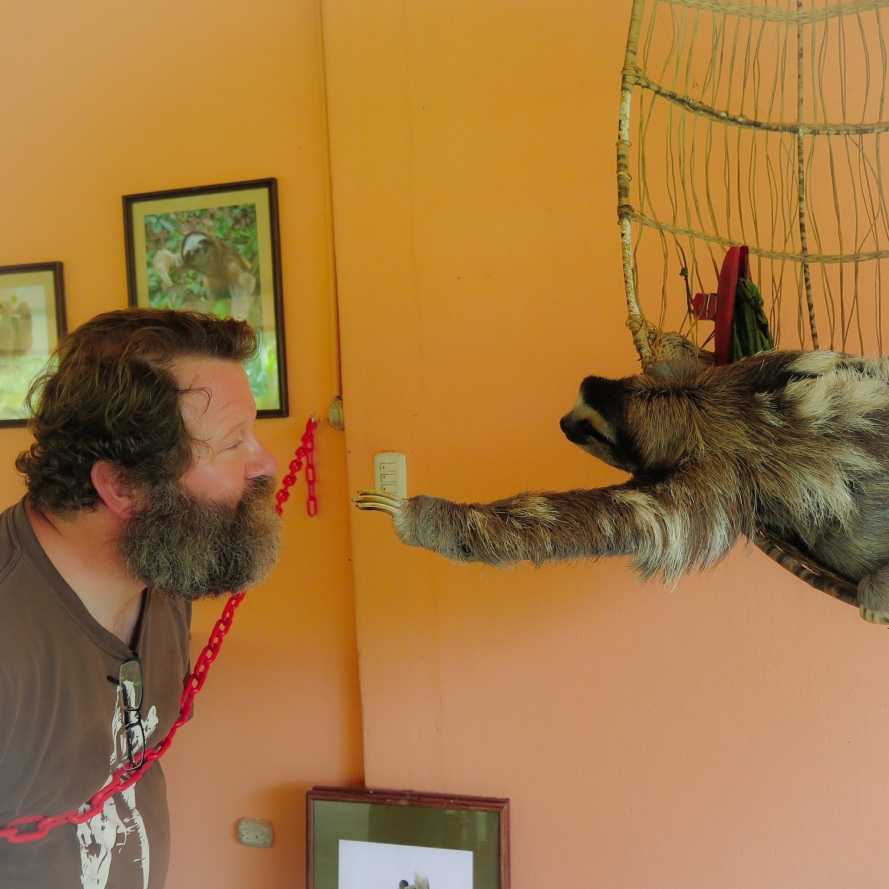 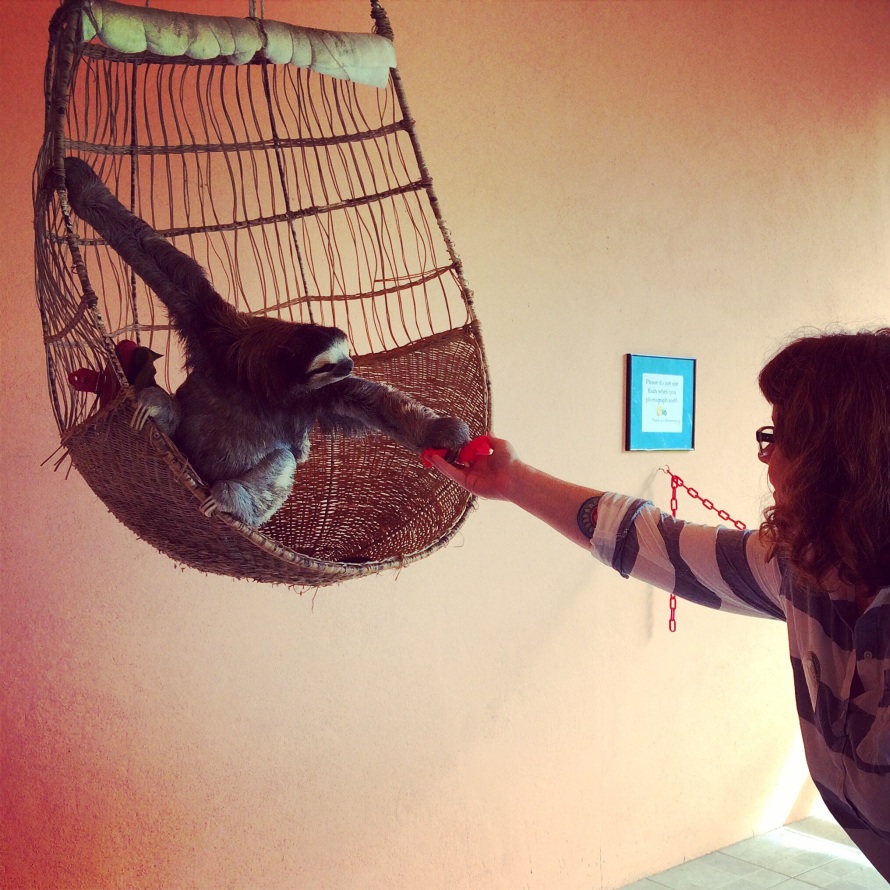 The next sloth we encountered, as we worked through a breakfast of eggs, fruit, coffee, and toast, was a wild sloth that just happened to be passing through the property. It is suspected that he was looking for Buttercup, who is in estrus and who announces that situation about once an hour with a loud, shrill cry. Our randy Romeo never reached the object of his interest, but he took a good tour of the grounds. We watched him come down out of a tall tree, wet (we think he may have swum across a narrow creek to reach the property), and then navigate slowly, surely, across the lawn to get to another tree. We kept looking at each other in disbelief that we were standing a few feet from a live, functional, on-the-go sloth. 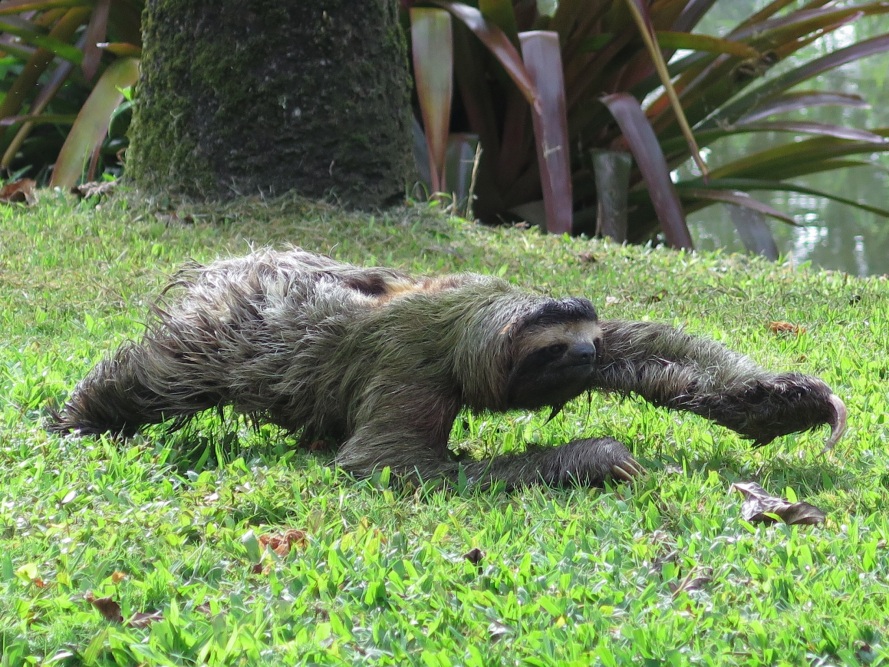 This is the wild three-fingered male that was looking for Buttercup. He looks surprisingly fierce in this picture.

We went on a little canoe ride, which was lovely (our guide complimented Becci’s knowledge of the local birds), but we have already been on a bunch of Costa Rican boat rides over the last three weeks. It was like watching the opening band before a Van Halen show. We came to see sloths, not see the river. To the sloths then!

The Sloth Sanctuary is the home for a great number of sloths that have been injured and are being rehabilitated for release back into the wild. The majority of the sloths that come to the facility are this type of temporary resident, and about 80% of the animals that visit the sanctuary are patched up and eventually released back into the wild.

The animals that remain permanently either have injuries that are too severe to allow their re-release, or they are animals that have come to the sanctuary at an age where they are too young to be allowed ever to be released into the wild. Immature sloths are trained to live properly in the wild by their mothers, and if they are separated from their moms too soon, this behavior is not learned. Because of this, orphaned sloths that are brought to the sanctuary are raised to maturity, and then become permanent residents.

During our tour today, we visited several permanent adult resident sloths, as well as getting a tour of the area where all of the permanent residents live. We also got to meet some of the injured and recovering temporary resident sloths. We got to feed a few of the resident two-fingered sloths their favorite treat, the Hibiscus flower. We also got to watch some immature sloths at play, and we then visited them in their neonatal intensive care unit. We toured the medical facilities that are on the premises, and met some of the folks that keep the animals happy and healthy.

Sadly, some of the animals that come here do so under tragic and utterly avoidable circumstances. We heard a few stories about sloths that had been intentionally injured and tortured by people. There are only a few things that could ever make me harm another person, but I have to say that when I hear stories about people intentionally harming animals, it makes my blood boil. I don’t really know where I’m going with this paragraph, except to say: I hope for my own sake that I never encounter anyone intentionally hurting an animal. It will end in a violent bloody mess, and then I’ll be on the lam.

Back to happy thoughts. The Sloth Sanctuary delivers an impressive tour of an important place. They care for a lot of animals here, and they are involved in a good deal of the leading research in the world on these fascinating animals.

As you can imagine, we have a lot of pictures and videos to share. Before we get to those, I have some sloth facts to lay on ya…some of which may just blow your mind. You have been warned.

* There are two types of sloths that are indigenous to Costa Rica. There is the Bradypus Variegatus (three-fingered) and the Choloepus Hoffmanni (two-fingered). They are both impossibly cute, but I think we both prefer the three-fingered ones. They are the ones that appear to be wearing a bandit mask, and their facial features seem to be a little closer together.
* The two varieties are of course very different. I got to look at skulls of both species today, and noticed that even the skulls look much different. For example, the two-fingered sloth has four relatively large canine teeth and 14 jagged molars. The canines are for tearing apart fruit and seeds. The three-fingered sloths just have a bunch of flat molars; different diet.
* Sloths are of course mammals, but they don’t maintain a constant body temperature in the traditional way that other mammals do. A sloth has no way to raise its own temperature. A sloth’s temperature will vary as environmental conditions change, just as poikilothermal (cold-blooded) animals do. A sloth’s body temperature is highest on warm, sunny days, and coldest at night or during rainstorms. During the hottest part of the day, sloths seek shade to keep their temperature from getting too high. Sloth temperatures may fluctuate as much as 6°C during the course of a day. If the body temperate of a person or a dog fluctuated by half that much, they would probably die.
* Sloths don’t have the ability to sweat, other than through their nose. This is the only mechanism that they have to cool their body temperature.
* Sloths have no body odor. A freshly washed sloth has no smell. And sloths rarely get dirty, as they spend virtually no time on the ground or in any sort of “dirty” conditions. They hang off trees in the sunshine of Costa Rica!
* Sloths can live as long as 40 years.
* Sloth stomachs contain a special bacteria that allows them fully to digest cellulose.
* Sloths don’t get gas. They neither burp nor fart (Lincoln, I’m looking at you).
* You have seen sloths hanging, climbing, etc., correct? It probably takes a lot of energy for them to hang there all day, right? Wrong! The hand closed position is the at-rest position. Muscle energy is expended to open the claw, not close it. And the at rest closed claw is extremely powerful. We were told that if a sloth was hanging onto a tree, it would take one strong adult to pry each of the sloth’s four appendages away from the tree.
* Sloth claws contain bone; they are not fingernails, but rather are part of the sloth’s fingers. Do not trim them.
* Sloths can regenerate these finger bones if they are damaged or lost. They can regrow fingers and toes!
* Taken together, don’t these last two facts remind you of Wolverine? C’mon…some of you were thinking that before I said it.

OK, that’s enough learnin’, I suppose. On to the pictures!

Buttercup shows off. She climbed all over this basket. She is a three-fingered sloth; these animals have more vertebrae than their two-fingered cousins, and can rotate their heads 270°. 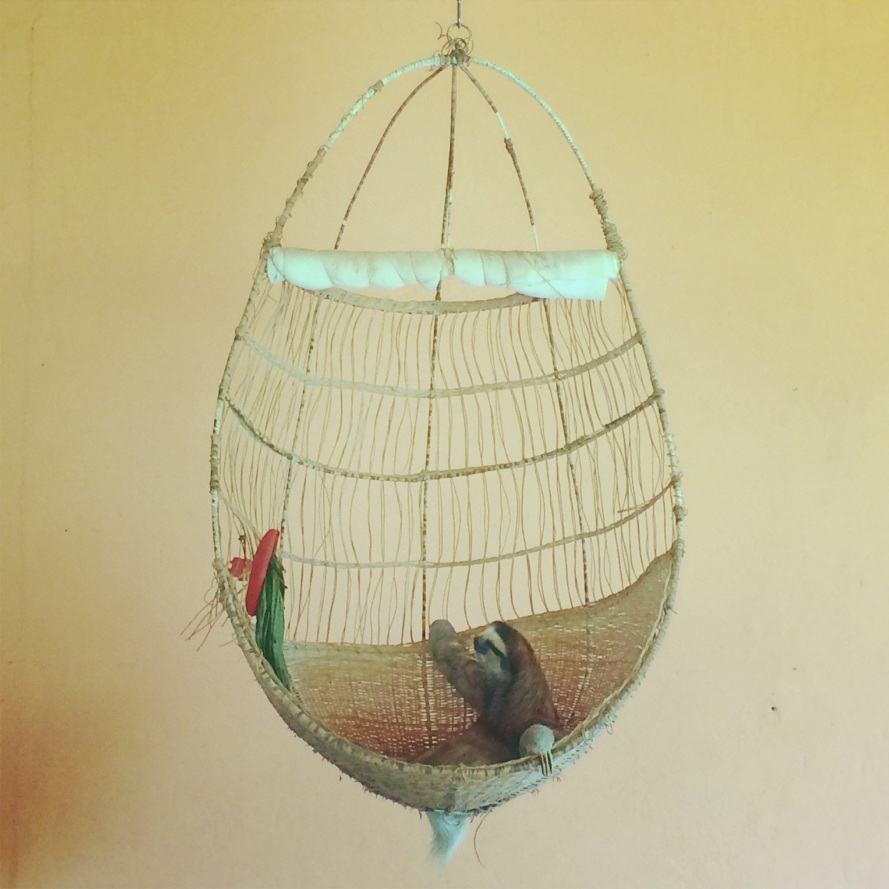 A moment of rest for Buttercup. That’s her tail sticking out of a hole in the bottom of the basket. 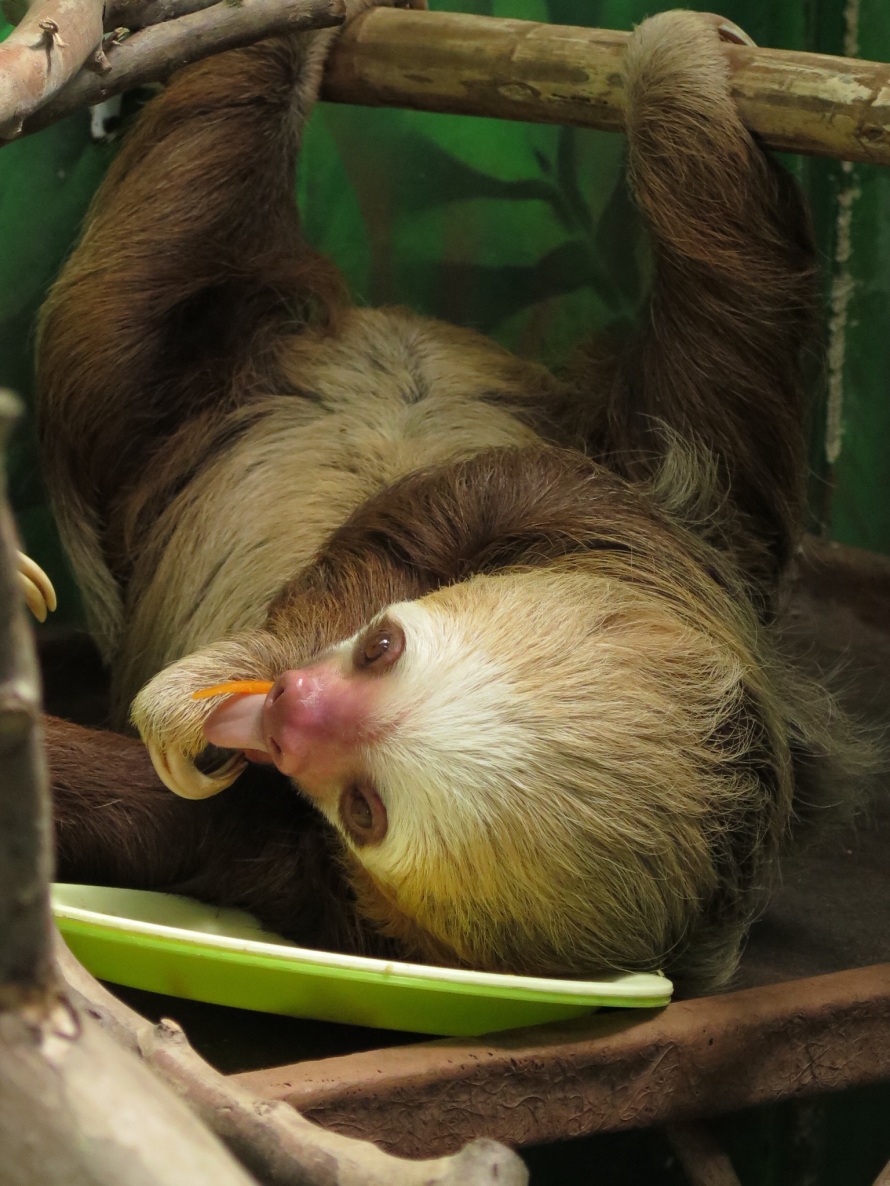 This guy’s name is Taz. He was in the middle of eating some vegetables and fruit when he showed us his tongue. Although most sloths prefer to live alone, Taz is friends and shares quarters with another two-fingered sloth named Johnny Depp. They have been buds since they were both brought in as injured youth. 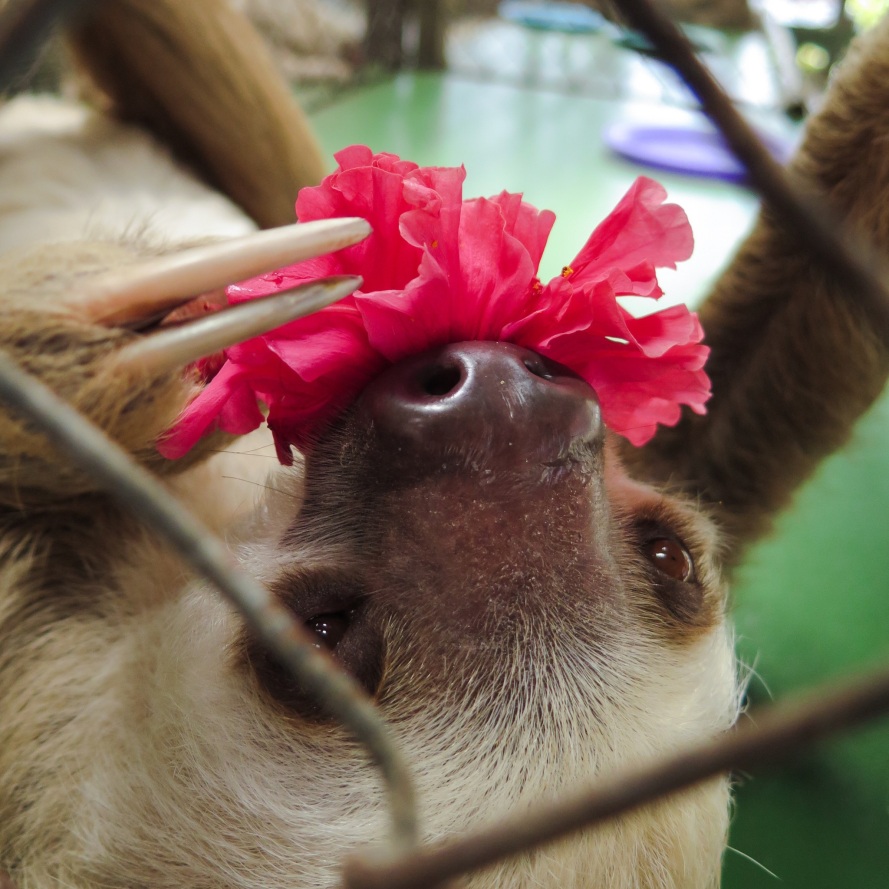 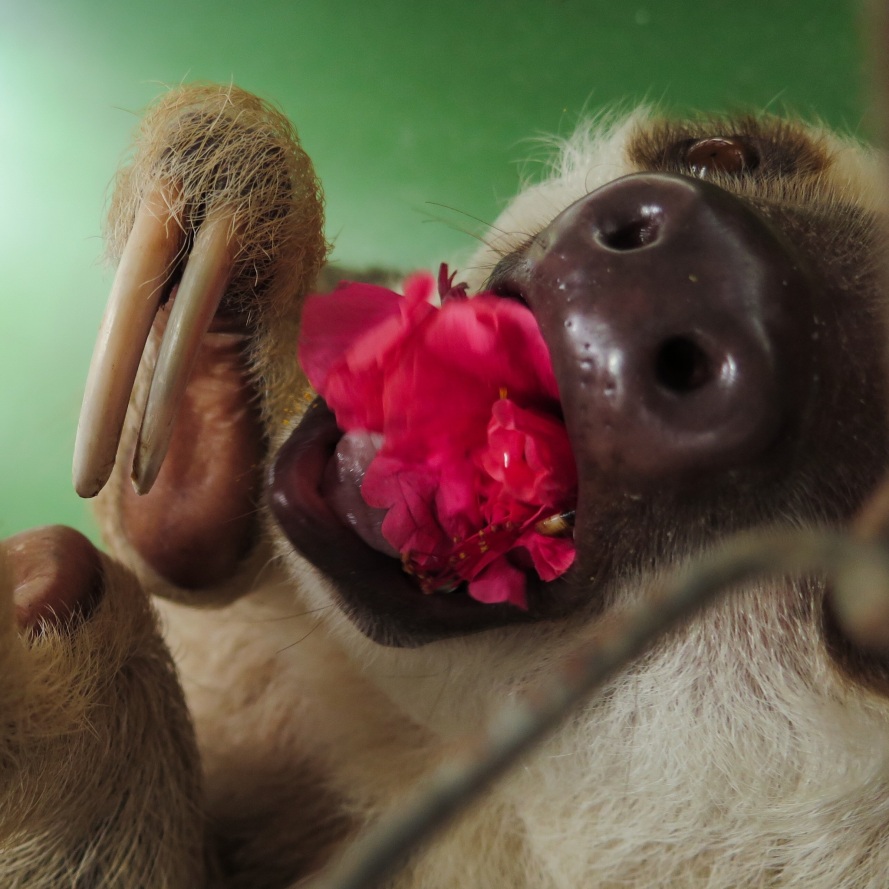 Thunder enjoys some Hibiscus of his own. He was named by a volunteer for Georgia, and they all call him Thundah. 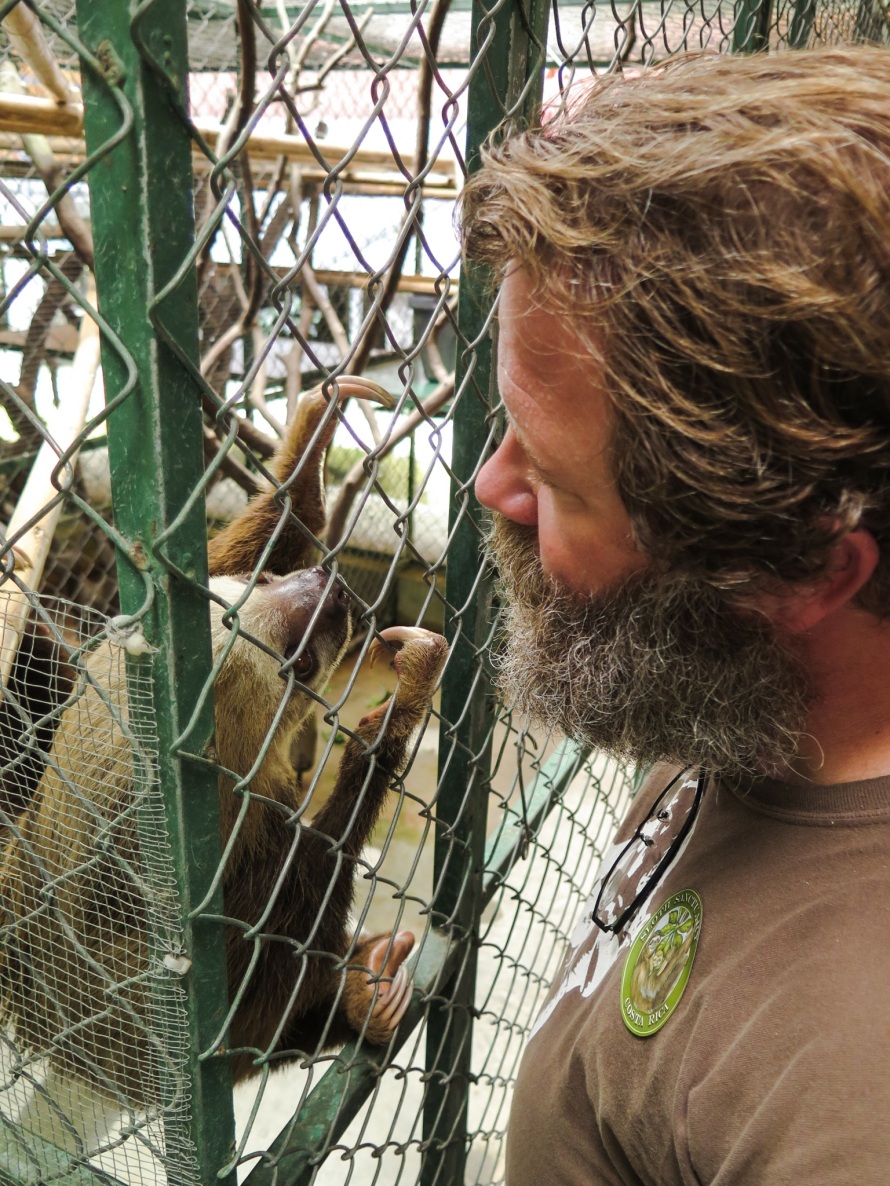 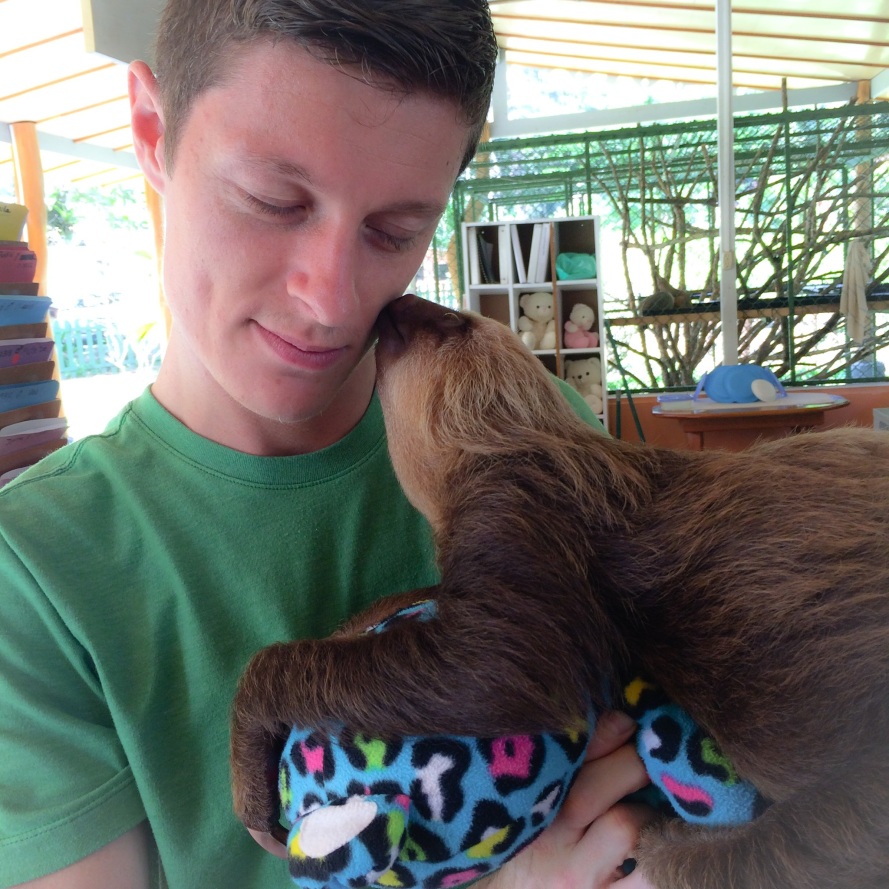 Jeffery, our tour guide, gets some love from baby sloth Jemima. 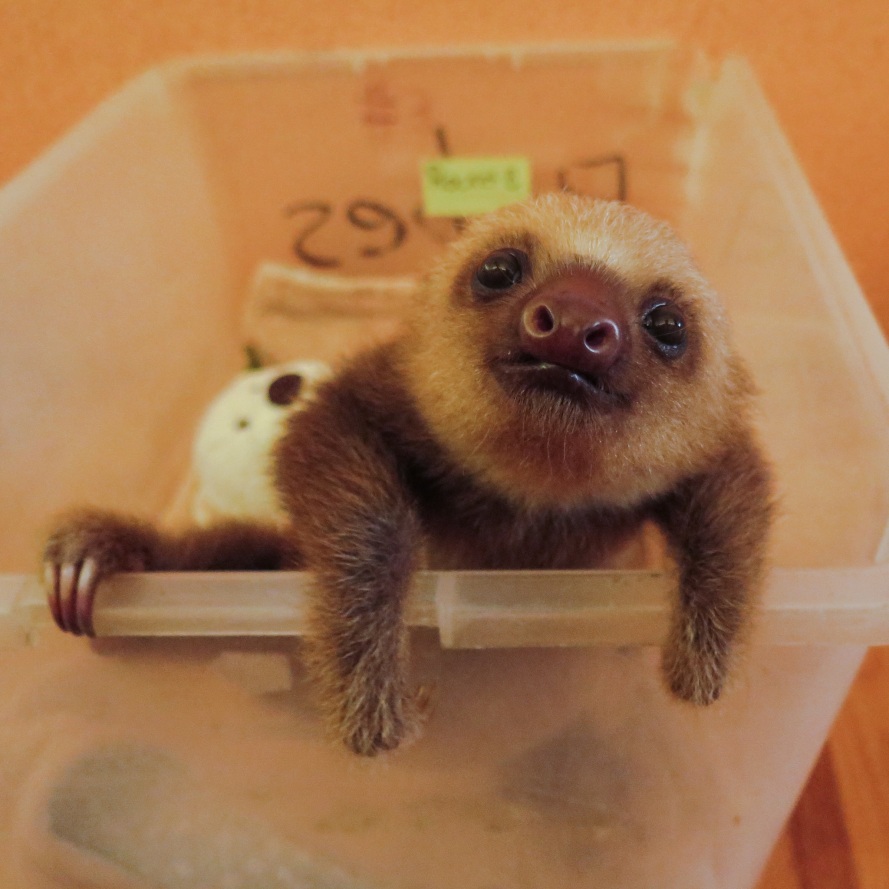 This baby sloth is named Rocket. he was quite active. You can see some of the difference here between the three and two-fingered sloths. Rocket is a two-fingered sloth, and has a longer nose and slightly bigger face. The hair color and patterns are also totally different than the three-fingered. 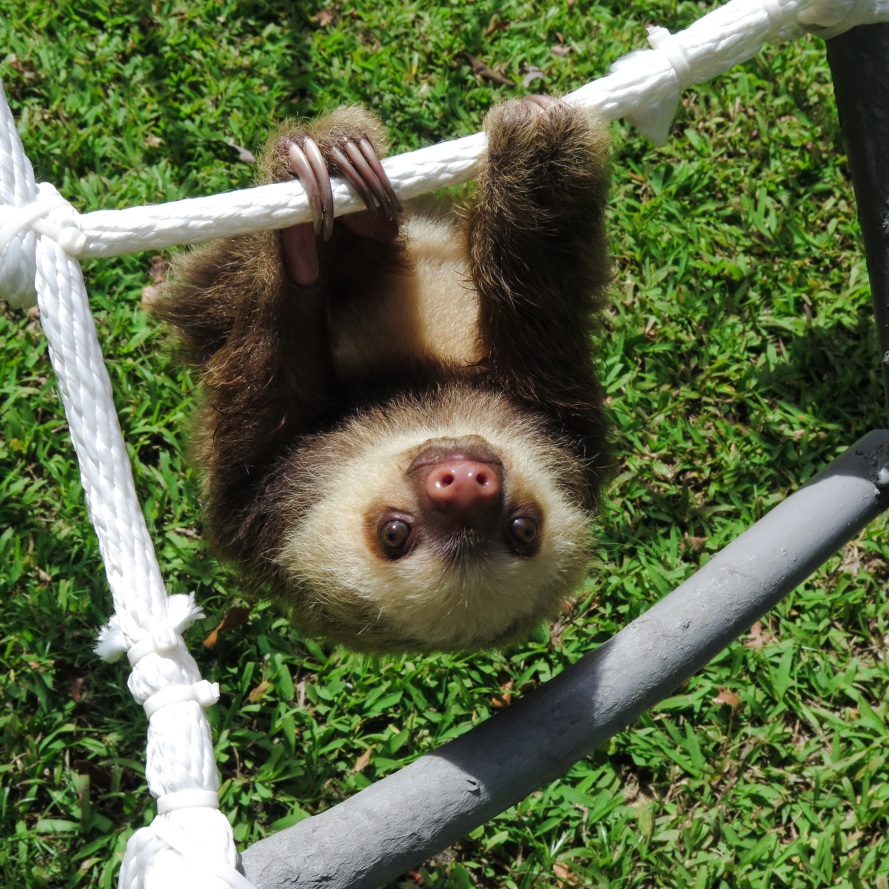 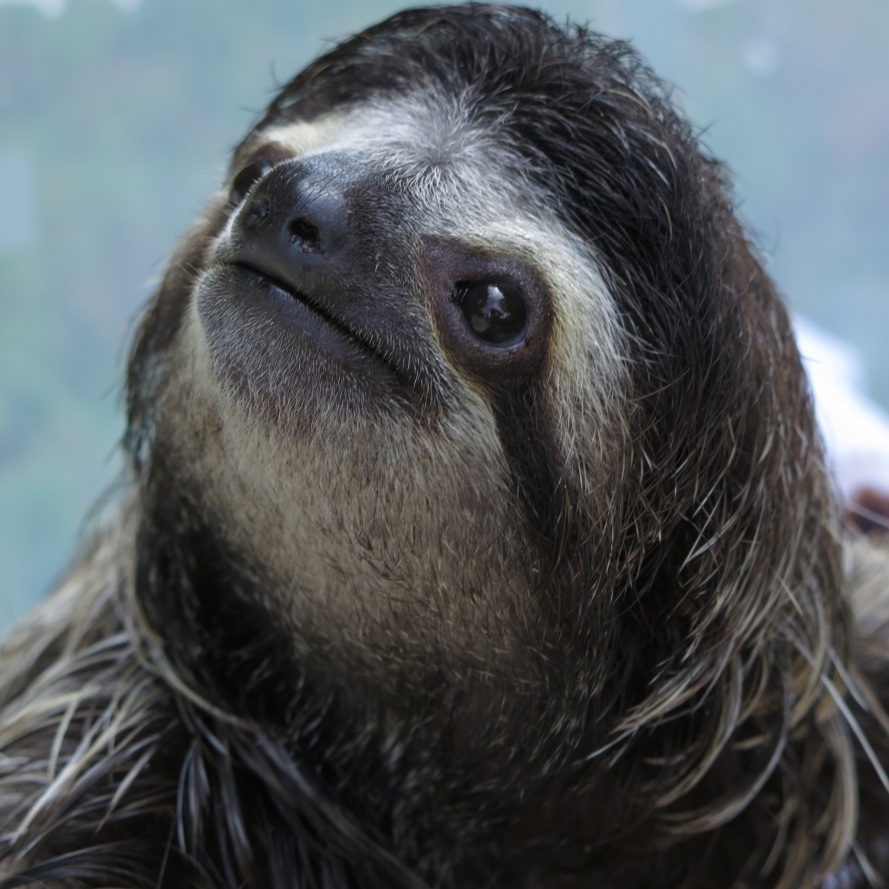 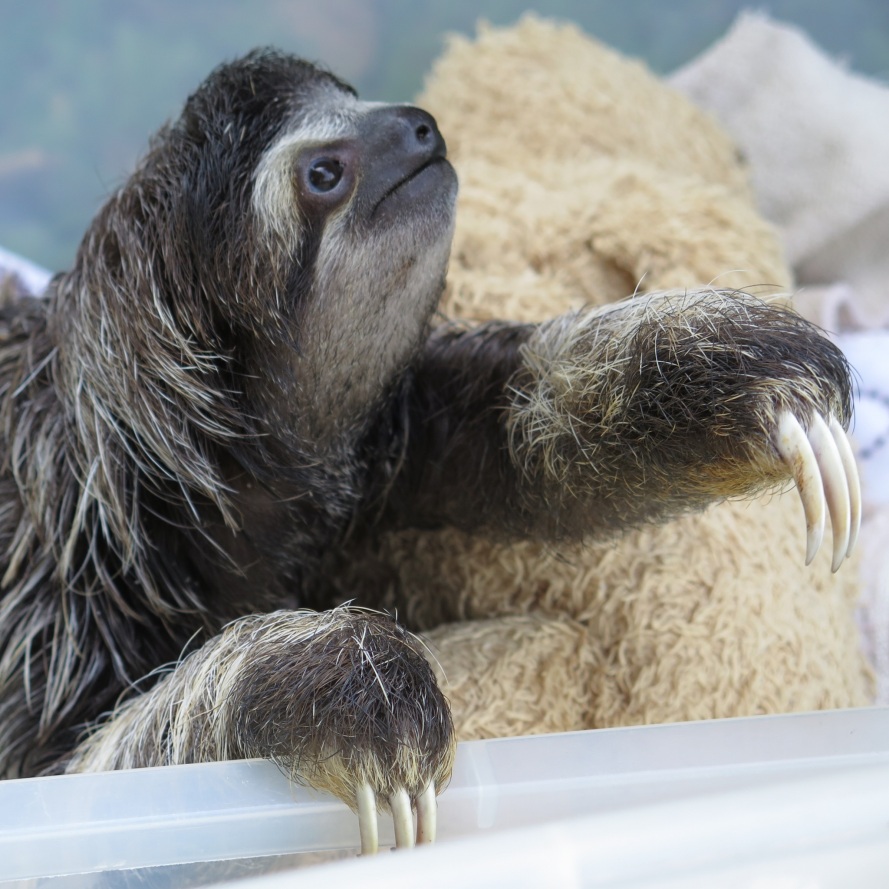 This baby three-fingered sloth is named Pria (“Beloved”). If there had been an adopt-a-sloth program, this little beauty would be coming home with us. We have a little saddle fashioned and she could ride around on Lincoln.