Hollywood, FL – A Vacation From Our Vacation

We scheduled a week in Florida between Costa Rica and Peru for a couple of reasons. 1) Lack of do-able flights directly to to Lima from San Jose 2) Creature comforts, including toilets you can put toilet paper into and 3) It lined up nicely with opening weekend of the NFL season…and whaddya know? The Dolphins were playing the Patriots!

Our arrival back to the U S of A went smoothly, picking up another couple of stamps in our passports. John is currently beating me, because I didn’t get any stamps in Europe…but I do get the pleasure of being fingerprinted and photographed each time I come back to the states.

Our Airbnb hosts graciously picked us up at the Tri Rail station and took us immediately to Publix. We walked under the glow of the florescents, staring at all the options. I’m amazed we didn’t go off the rails and come out with armfuls of hot tamales and twizzlers. In fact, we went into efficient Europe mode, grabbing all the stuff we typically got on the continent when we were forced to fend for ourselves in the kitchen. This means tacos, spaghetti, bacon and eggs and sandwich supplies. In Costa Rica, I learned how to slice a pineapple, so we grabbed one of those too. Now I get to be one of those smug people with a whole pineapple in their cart…not the plastic tub full of pre-cut pineapple that they sell to pineapple novices. Losers.

We had zero plans for our time in Hollywood Beach…mainly we wanted to sleep in the air conditioning, look at the beach, watch NFL and that’s about it. Other than seeing the Dolphins, the only major accomplishment was the day trip to Key West. Oh, John also participated in his annual NFFL draft in preparation for fantasy football, which requires all the technology.

Hollywood Beach is very picturesque, and it was about 200ft away from our house, so we got to look at it a lot. 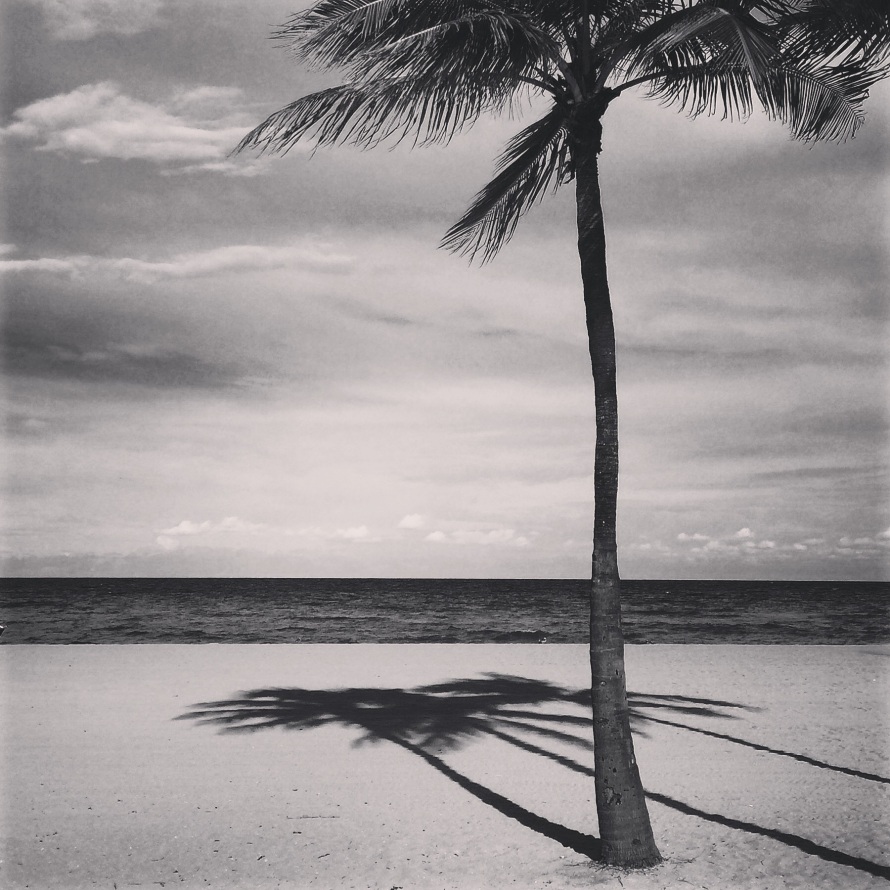 We only went out on the beach at sunrise and at night, any other time it was unbearably hot for non-acclimatized folks. Our host, Robert, said it was ‘finally cooling down’ which meant they were starting to see the 80’s as opposed to being 95 at night. I am truly a cold-weather girl and this type of heat really screws me up. Hence, our excursions into the outside world were timed to avoid the blistering sun.

One morning, in a fit of insanity, we got up early and I watched the sunrise while John ran the boardwalk. Surprisingly, there are a fair amount of folks on the beach for the sunrise…mostly meditating, doing yoga or, in one gentleman’s case, smoking a joint with his feet in the surf. I settled down on a lifeguard tower and watched a submarine cruise around, which was pretty spooky and cool. 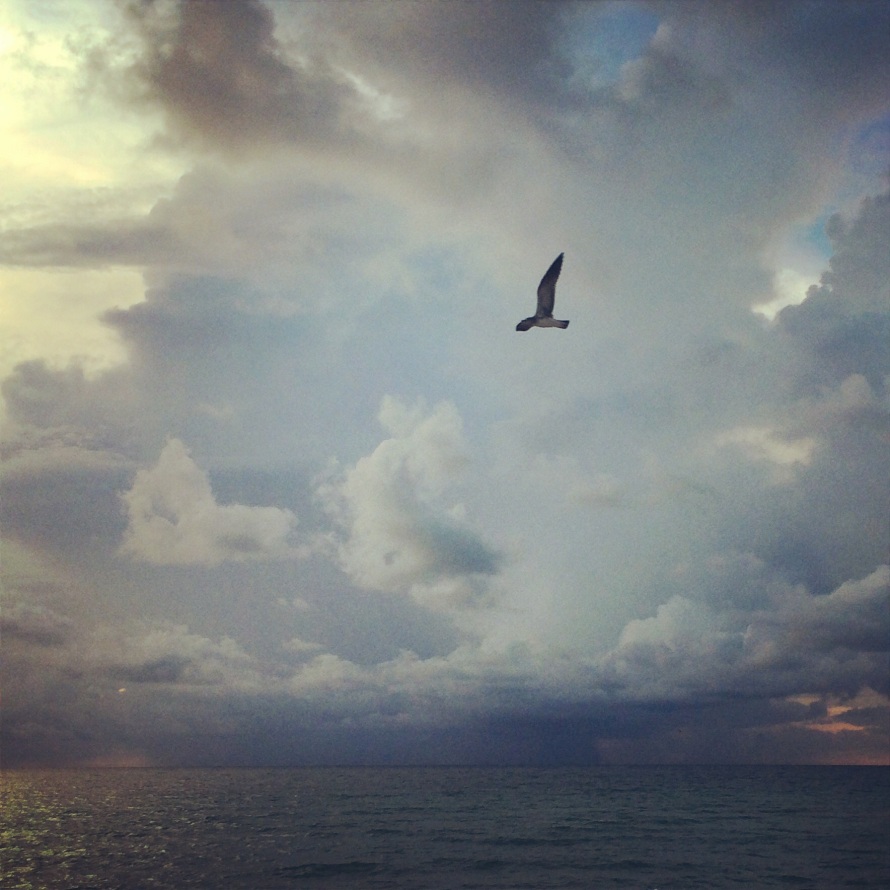 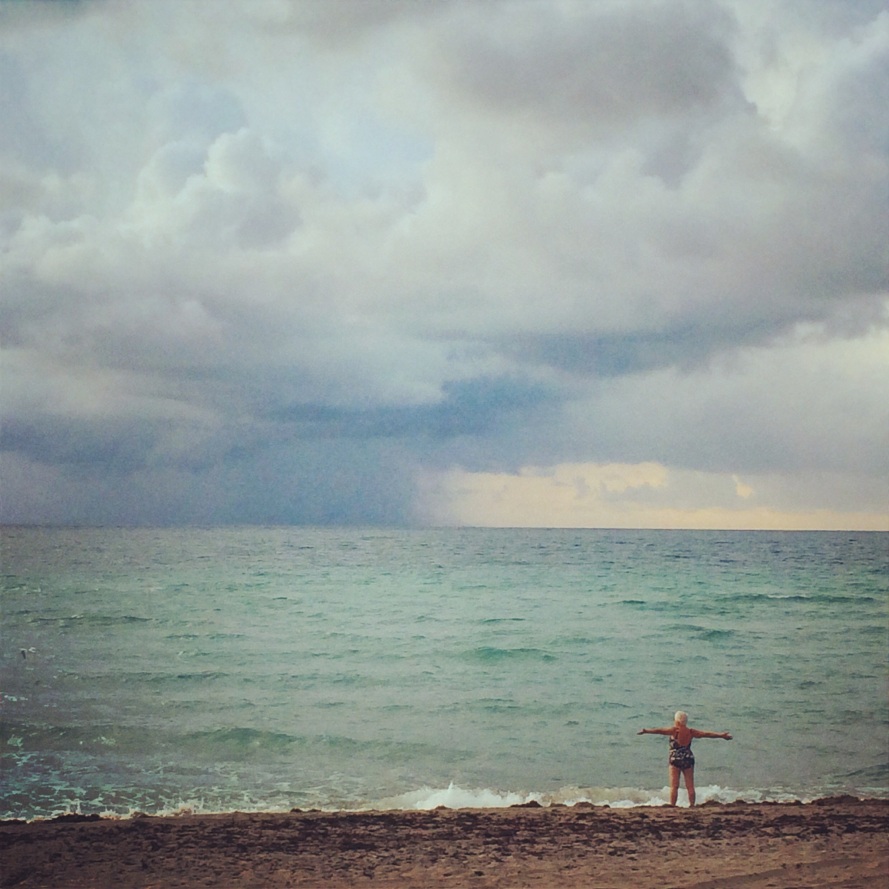 The highway was calling to us, so we rented a car and drove down to Key West. My parents had recently tri-cycled all 126 miles of US1 down to Key West and reported back that it was worth the trip. We went there and back in one day and here are my top five Key West facts.

1) Many of the Keys smell like rotten eggs.
2) Costa Rica ruins other widely agreed-upon pretty things for you.
3) There are a lot of sunburnt people from Boston and NY in Key West.
4) It’s very hot.
5) There are many ‘southern-most’ things here. 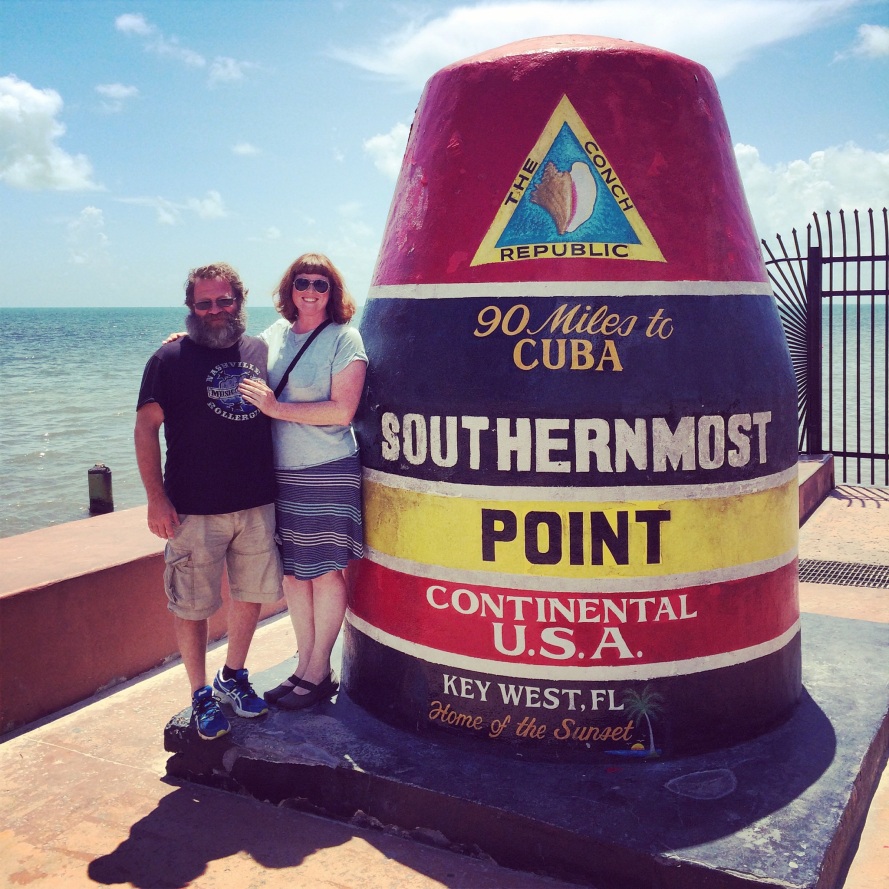 I was definitely the southernmost British girl having a horrible time…until we saw the MANATEE and then all was forgiven. 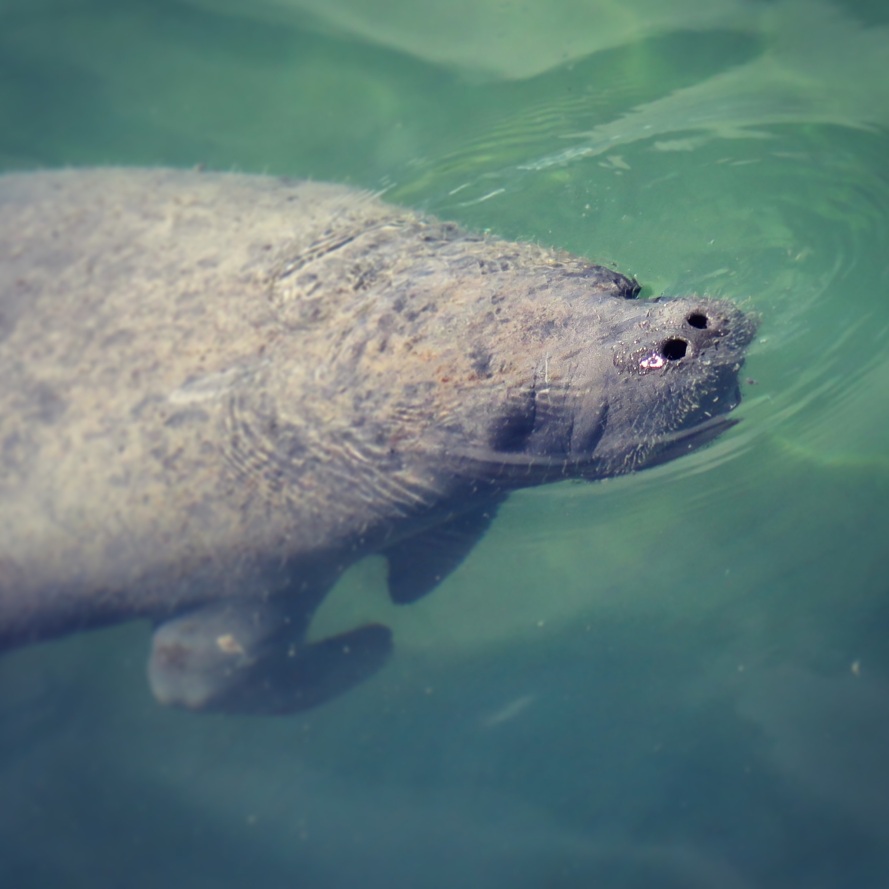 We also visited a wacky landmark, Purty’s Bat Tower. This structure was built to combat the local mosquito problem. Mr. Purty’s plan was to build the tower and fill it full of bats, which in turn would eat the mosquitoes. Approximately 3 minutes after deploying the bats, they all buggered off and were never seen again. The tower was promptly abandoned and now people in cars come here to take pictures of it.

The reason I was Little Miss Crab is that I was experiencing the first day of an incredibly crappy cold that is still plaguing both of us. With bonus symptoms such as blinding headaches and nausea! I think it’s just a regular cold and not some horrible Costa Rican plague, but I suppose only time will tell. I have been told that the best thing to do when you feel like hell is to sit in the direct sun for four hours. Fortunately for us, the Dolphins were playing at Sun Life, so we had no problem filling that requirement.

John has been a Dolphins fan since he was a kid and he had never seen a home game at Sun Life. We got great tickets on the 50 yard line and spent 4 hours in the sun watching the Patriots get their asses kicked…I couldn’t think of a better reason to broil myself. 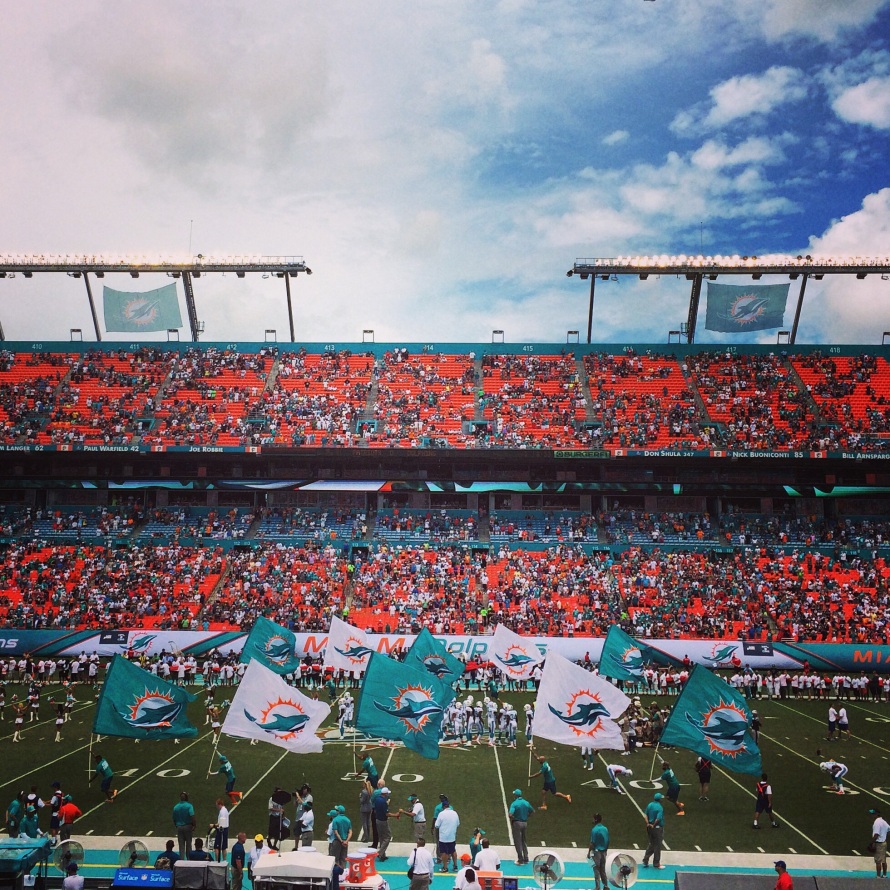 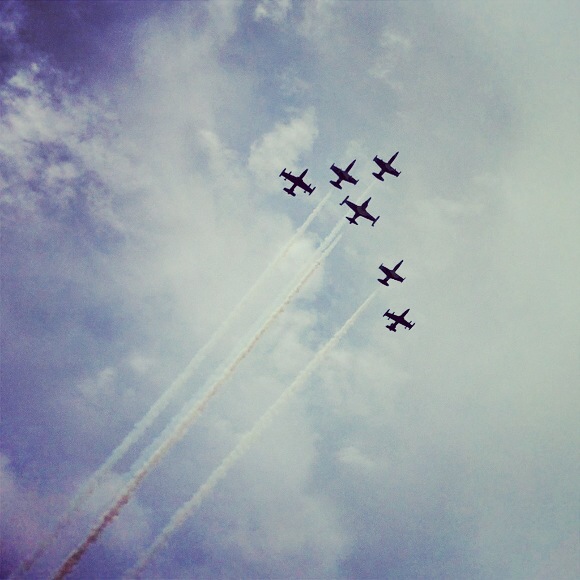 The game itself was mostly solid. The Dolphins offense took the first half off, although the defense played decently. The halftime score way 20-10 Patriots. We figured Brady would come out in the second half and carve up the ‘fins.

Of course, the same heat that was working on us in the stands was working hard on the boys from Boston down on the field. Unlike the Dolphins, the Patriots hadn’t been training all summer in that sauna. Also, as they always do for September home games, the Dolphins opted for their white-on-white uniforms, leaving the Pats to wear their navy blue jerseys in the mid-day Miami furnace.

The second half saw the Dolphins outscore the Patriots 23-0 and win the game. They owned the second half, with a solid running game and a swarming defense. Cameron Wake tore stuff up. It was a great first game on the Dolphins home turf.

By the end of the 4th I was dragging…badly. Here I am enjoying myself:

We made it back to the car and I rode home in a stupor, and stayed in a heat induced coma for the next 8 hours. I was practically glowing…many ice packs were applied, much water was ingested and I am sure a lot of whining occurred, but I can’t be held accountable when my internal temperature is hovering around 150F.

The rest of our time in Florida was spent either buying supplies for the Peru trip or trying to recover from our various maladies. Whatever funk we both have, it makes you feel hungover without the fun drinking part, which is such a bummer. We did survive the 6 hour plan trip, although I was fighting nausea the whole time, and arrived in Lima around 10pm. A teaser for the next blog…we are staying next to a huge park with a huge cat population! Miaow!