Peru’s Sacred Valley – The Belly Button of the World

After visiting the jewel in Peru’s crown, Machu Picchu, I expected our day tour of the Sacred Valley to be a bit of a let down in comparison…I couldn’t have been more wrong!

The Sacred Valley stretches from Cusco, the famed Incan capital, all the way to Machu Picchu. Between these two points lies a beautiful, fertile land, dotted with small villages, patch-work fields along side the Urubamba river and many important Incan sites. Our day tour, organized by Llama Path, stopped at Pisac, Ollantaytambo and Chincheros…all home to impressive Incan ruins and breathtaking views.

I’m ashamed to report that we almost didn’t go. John’s sickness over the past few days had really started to take it’s toll and we were all exhausted from the previous long day at Machu Picchu. If Nick hadn’t persistently knocked on our door at 7:00am, we would have slept in past our 7:45am tour start. However, John was feeling better and we felt that we couldn’t waste Nick and Wendy’s last day in Peru…so we struggled out of the house around 7:15am and caught a cab into town.

We joined another family of four outside the gates of Llama Path who were ex-pats from the US, now living in New Zealand. Soon, a very comfortable van pulled up and we settled in for an hour ride to our first stop: Pisac.

Along the way, we stopped at a mirador to get our first picturesque view of the Sacred Valley. 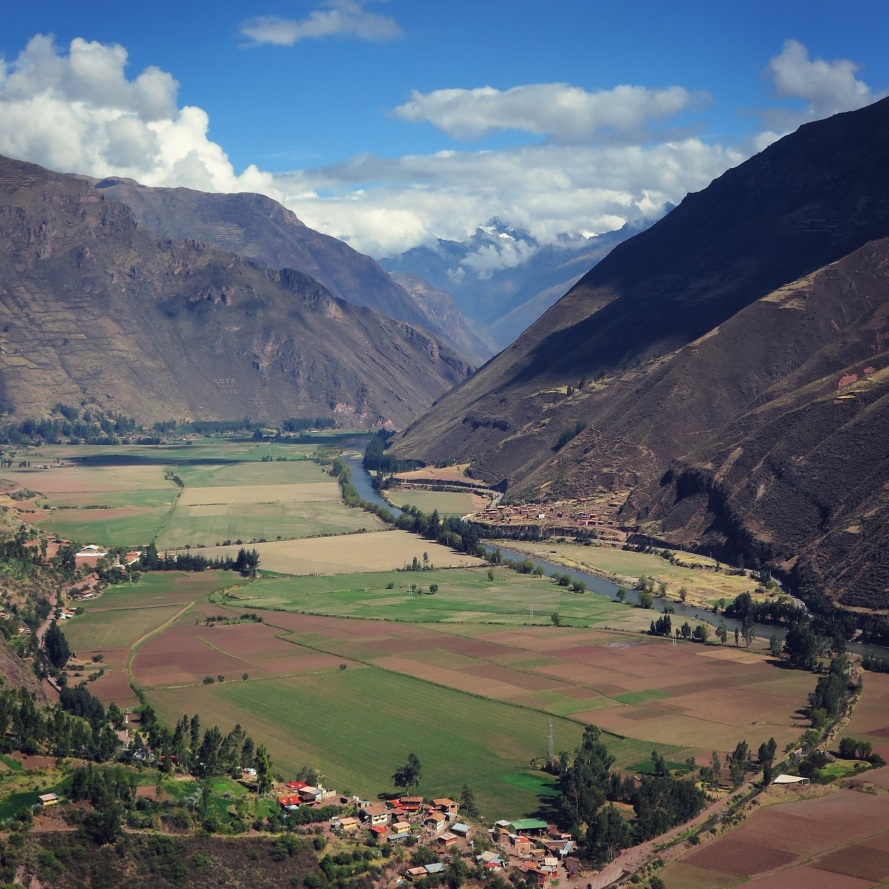 As we stared at this glorious sight, Casiano (our Llama Path guide) told us that the valley was made by the Urubamba river, known in the Incan circles as the Sacred River. The Sacred River runs east to west, along the path of sun, which is a pretty big deal in the Incan world; also, the river was considered the earth-bound version of the Milky Way or Mayu, which was incredibly important ‘life giving’ river in the heavens.

Image courtesy of From Quark to Quasars.

Our first site was Pisac, built in the form of a partridge. We were given a choice by our guide as to whether we wanted to ‘see stuff’ or shop…and as we are already doubting the capacity of our bags at this point, we opted for the former. So, having skipped the famous market in Pisac town, we arrived at the ruins before the rest of the tour groups and had this impressive site to ourselves.

This complex includes residential areas, temples and, of course, terraces to grow corn, potatoes and quinoa. The Inca people grew an enormous amount of food, and stored the surplus in huts high on the mountain; the cold air at this altitude would preserve not only vegetables but meat as well. All the sights we visited had food storage building perched high above the rest of the remains.

We had about 45 minutes to explore Pisac, which allowed us to cross the terraces and climb to the Temple of the Sun on the far side. This adventure took us up and down many steps, the average height measuring about 1ft, and through a narrow tunnel carved into the rock. We are definitely getting used to the altitude, as the amount of huffing and puffing has definitely decreased. Even though I hate climbing stairs, the views are always worth it.

I’m really glad we skipped the market because as our time at Pisac ended, a swarm of tour busses pulled up, blocking the entire road. We smugly climbed back into our minivan, wove our way through the traffic jam and headed off for lunch.

Lunch was a rather expensive buffet made up of the usual Peruvian offerings. We were entertained by a three man band, each musician wielding several pan-flutes of varying length. My patience for pan-flute music runs out around halfway through the second rendition of El Condor Pasa. Others in the group seemed to enjoy it, and a couple walked away with meditation CDs. I politely declined.

The main site on the tour was the large ruins in Ollantaytambo.

Ollantaytambo, the town and the ceremonial center, was built by Inca Emperor Pachacuti, as his royal estate. The ceremonial site is constructed in the shape of a Llama, and a square temple at the llama’s head is lit by the sun on the winter and summer solstices, creating the shining eye of the llama. It’s 300 hundred steps to the temple, a journey which was made with several stops. 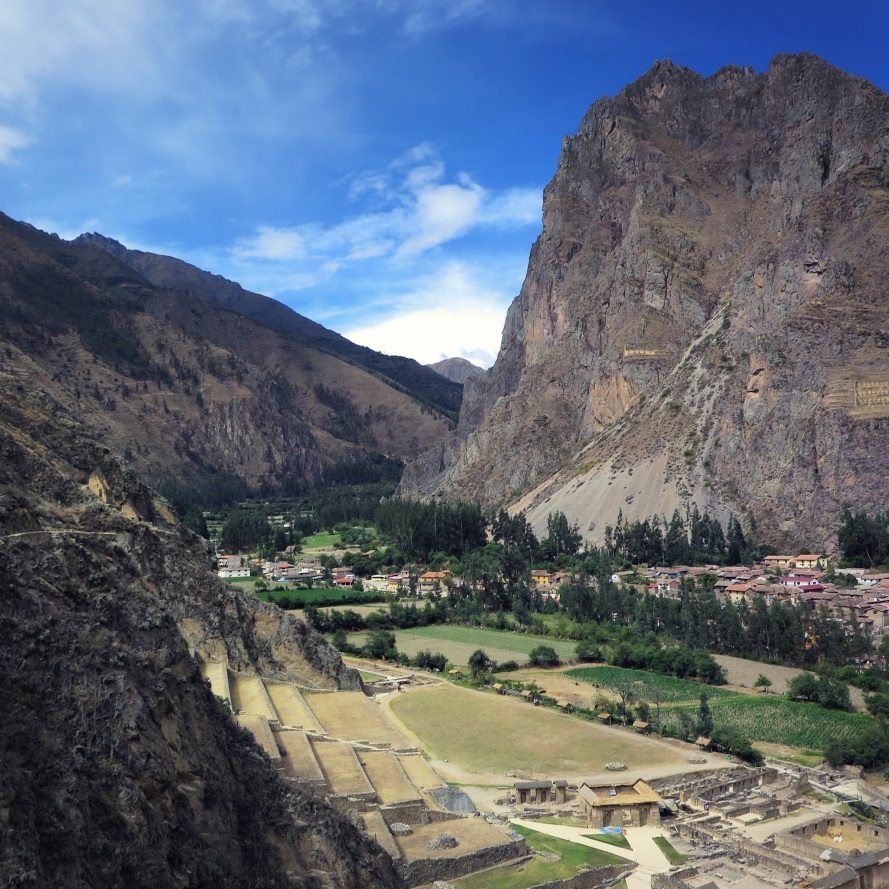 View from the top of the ruins, looking down onto Ollantaytambo town. To the right, on the face of Pinkuylluna mountain, you can see the likeness of a human profile. This is Wiracocha’s image; Wiracochan was the messenger of Viracocha the creater god of pre-Incan and Incan mythology

The food storage structures can be seen here above the terraces.

The rocks that were used at Ollantaytambo were brought into the valley from a quarry 7km away. Why didn’t they just build it near the quarry? Well, if they built it 7km away from it’s current position, they wouldn’t have all the fancy solstice tricks that bring out new-agers by the hundreds (I’ve heard that solstice days at Machu Picchu are a veritable circus of hippies with crystals). Many areas of Ollantaytambo have special solstice events. The profile of a man can be seen on the mountain that faces the ruins, and the sun breaks over his crown during the solstice days. 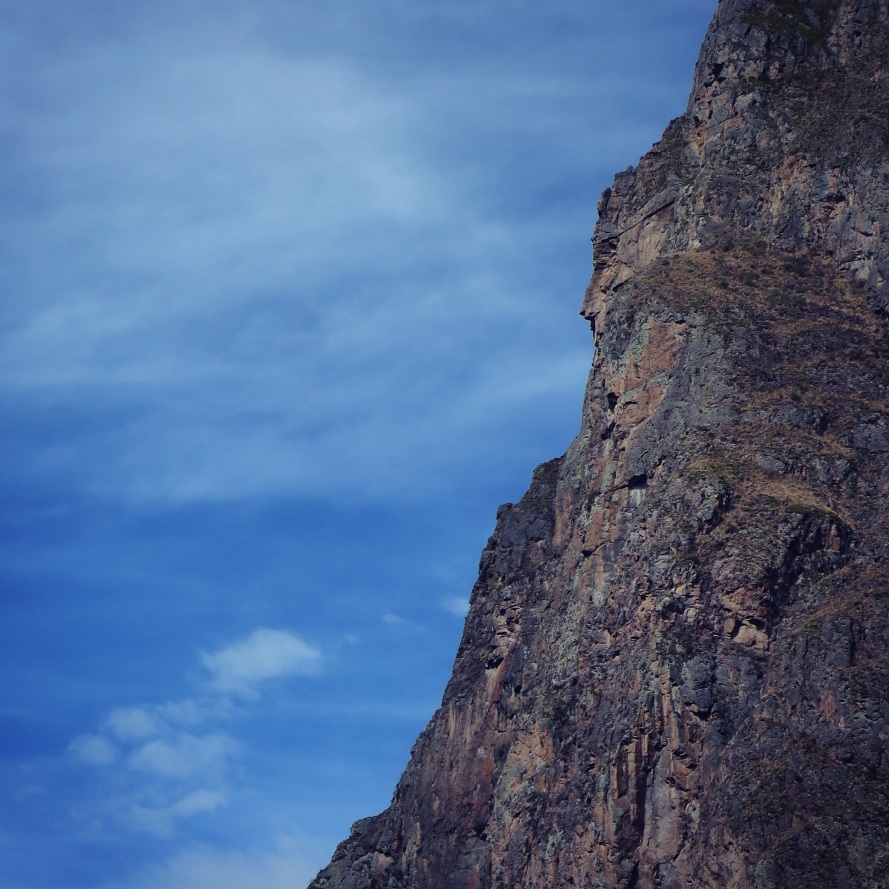 There’s a special bath, the water channel of which is only heated during the sun on the solstice…which seems like a hell of a long time to wait for a warm soak.

Much like Machu Picchu and Sascaywaman, huge ‘mega-blocks’ are present at Ollantaytambo. 6 monoliths make up the Llama eye structure. The Incas used interlocking blocks to keep their structures nice and sturdy; arguably the first ever lego bricks in existence. 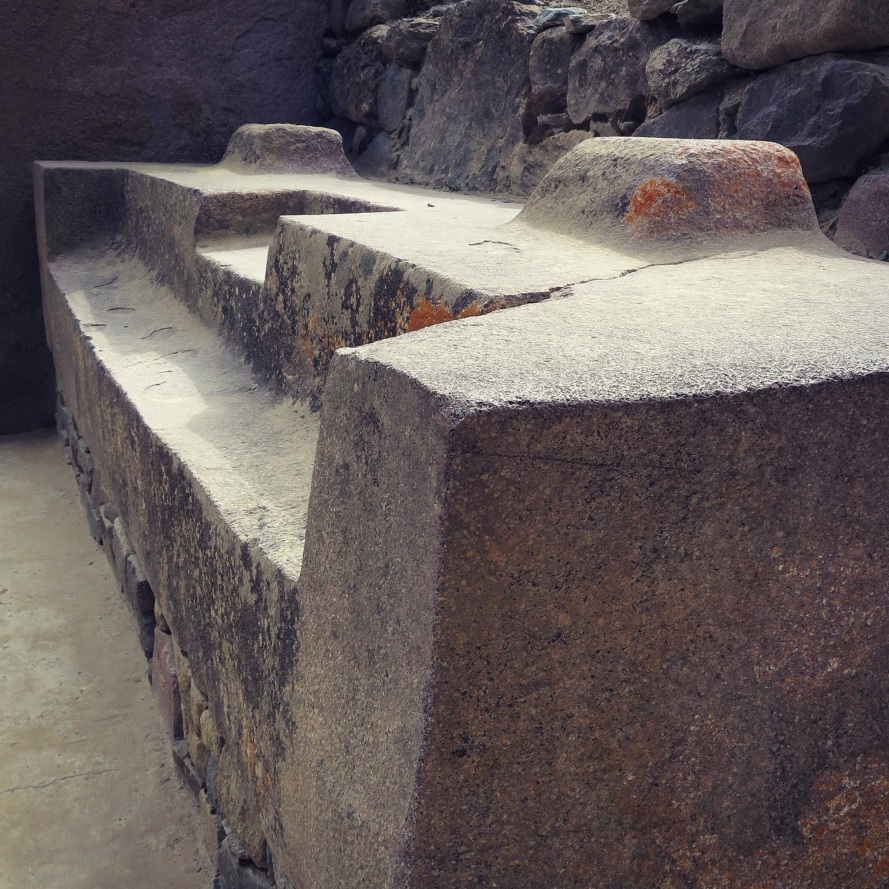 We climbed all over this thing…surprisingly, when you are climbing down huge steps…it’s almost as bad as going up. Tough on the old knees. All of a sudden, those dorky hiking sticks that the Canadians are always carrying around seem like a good idea.

We made it back down without any ACL traumas, and piled back into the mini-van to set off for the last sight of the day: Chincheros. As we drove through the winding roads, Casiano gave us another option: “Would you like to taste some Chicha beer?” For the majority of those in the van, he might of well have asked “Do you guys want to continue breathing for the next 5 minutes? A resounding, masculine, “yes!” was returned, and we stopped off a tiny house on the side of the road for our Chicha beer experience. Chicha de jora is made from corn, traditionally with Jora corn, giving it a murky yellow appearance. It has a very low alcohol content, about 1-3%, so you have to drink a lot of this muck to feel anything. Nick, John and Wendy gave it the good, ole college try.

Our host, Sonja, showing us the corn she used to make the beer.

To be honest, I’m a low-risk type of gal, so I only drank a few sips. Gary, one of our traveling companions, refused the chicha. “I drank about a liter of that stuff and ended up with Giardia.” See this blog post for the delightful symptoms of that little treasure. Taking into account that chickens, guinea pigs and various other creatures were running around inside this dwelling, I opted out of whatever bacterial monsters lurked in the murky chicha. The other members of my party downed a couple of pints of the stuff…and so far, no side effects. I’m happy with my decision.

There were two other notable experiences included in our chicha stop. The most important one being KITTENS.

They were three weeks old, and were currently living in the oven (not in use). The appropriate amount of squealing occurred (both from the humans and the kittens) and one was dragged out of it’s hiding place for us to coo at. It’s hard to look tough when you are snuggling a squirmy kitten. 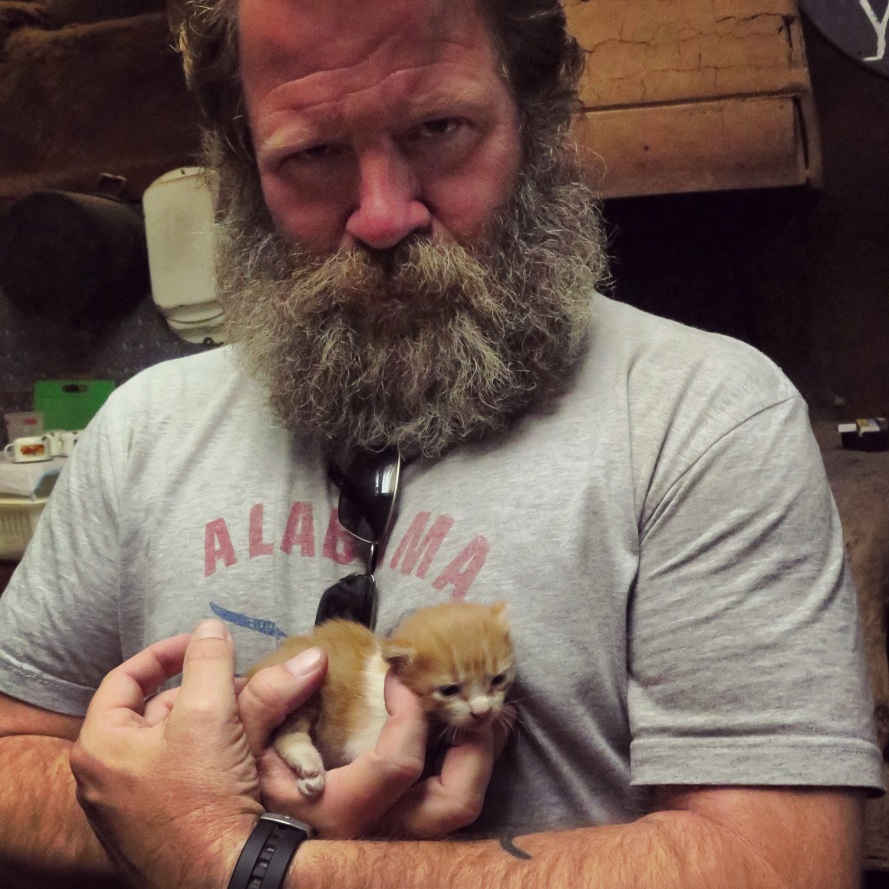 We also got to play a game of Froggy, which is a drinking game involving tossing golden coins into the mouth of a small, bronze frog. 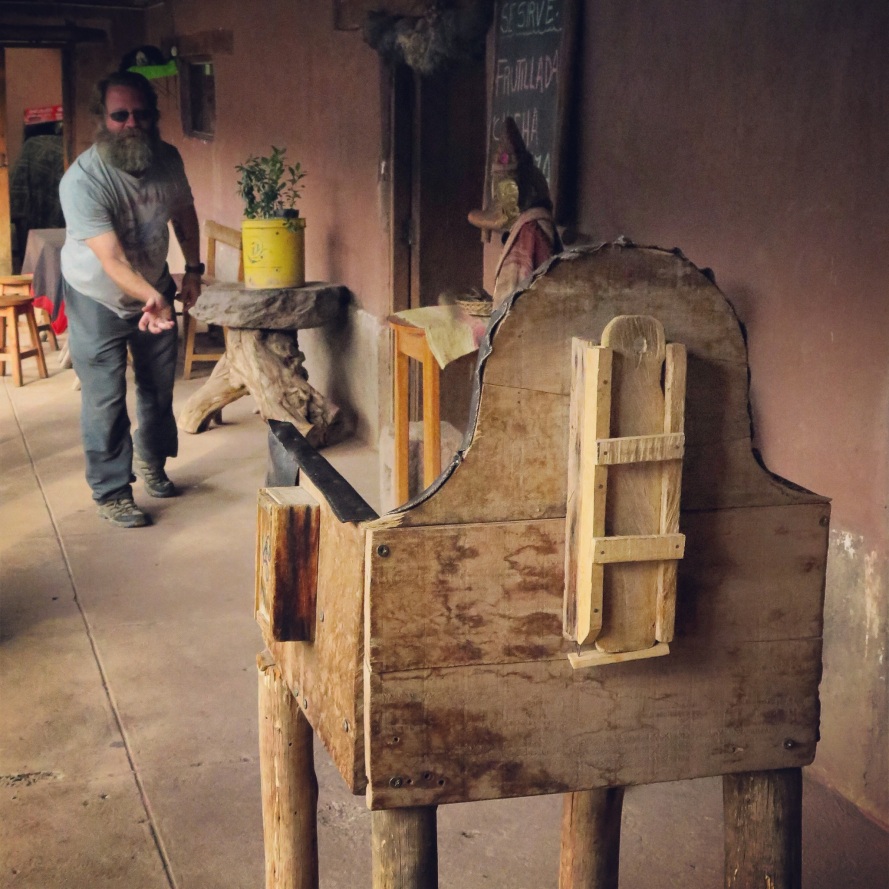 I am assuming it gets more hilarious after 7 gallons of chicha…but we had a good enough time…especially when one of our companions nailed a chicken with one of the coins during a rather energetic toss.

On the way out, we passed the resident Ekeko statue. Ekeko is the Tiwanakan (pre Columbian civilization) god of abundance and prosperity in the mythology and folklore of the people from the Andes.

This one apparently smoked cigarettes, although we did not see it in action. This little guy is usually decked with bags, food, money…anything a person is thought to want to need to have a comfy life. Note the lack of chicha beer.

Our last stop on the tour was the village of Chincheros. While there is an Inca site here, the tour mainly consisted of going into the church…which I completely missed as I was running around taking pictures of the sunset on the mountains, the ruins and pretty much anything else that the golden beams hit. 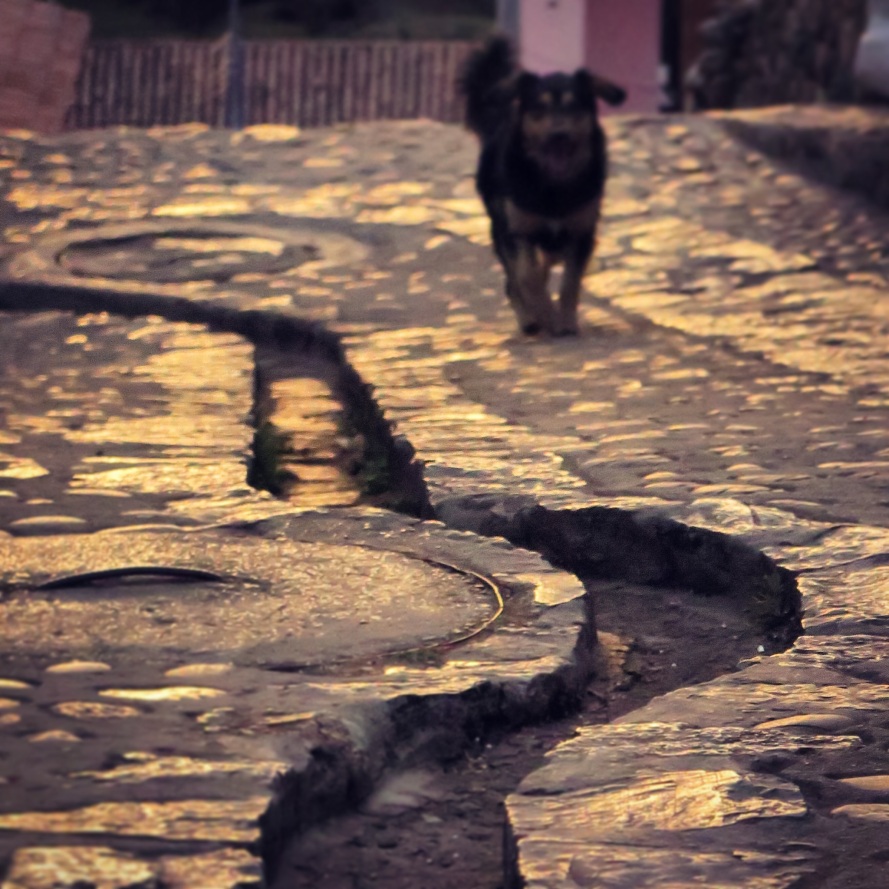 Drainage system in the streets drenched by the sun.

The moon quickly rose above the plaza and the wind picked up…it was definitely time to go home.

Two long days climbing around ruins takes it out of you…plus Nick and Wendy had to catch a cab to the airport at 4:30 the next morning. We are following suit a couple of days after, and although I have been thoroughly enchanted by Costa Rica and Peru’s stunning sights…I am looking forward to getting back to Nashville. Squeezing dogs, friends and family are top priority…although only just beating out throwing toilet paper into the toilet and many diet cokes. See you soon, Nashvillians!