The first two days of our trip was definitely eventful…we made it to Iowa City on schedule, although there were many diversions along the way.

We left Nashville about 90 minutes behind schedule, which was actually a little better than I expected. When we are in our own country, with our own comfy bed, we tend to drag ourselves out of the house at least two hours later than planned.

With the On The Road playlist cued up on the ipod, we barreled down I-40 W, headed to Jackson, TN where we would finally get to some of the lesser highways which will make up the majority of our routes for the next 6 weeks.

We are experimenting with capturing videos during the trip via a dash-mounted iPhone, programmed to take a picture every 20 seconds. On particularly scenic routes, we are switching to hyperlapse videos. I realize that it’s not particularly interesting footage, so feel free to skip those, I won’t mind. For the first 20 minutes or so on the road, there was a lot of fiddling around with the tech; our dash mount has a habit of randomly rotating the phone holder a couple of notches to the right, but it’s working out fine for the most part.

We left Jackson behind via 412 N and headed through Alamo, Bells and Friendship, TN. We were headed to Dyersburg, where we would pick up the Great River Road that hugs the Mississippi, and then the Missouri river all the way to Iowa. Studying the physical atlas, there seems to be two versions of the Great River Road: I-55 and a tiny cobweb of roads on the other side of the east of the river. As excited as we were to see the Mississippi, we decided to drive on the lesser roads for about 20 miles, then cut back across and resume our trip on the highway.

It turns out that you don’t just ‘cut back across’ the Mississippi whenever the hell you want to…and thus began our first unscheduled adventure in a small patch of Tennessee, centered around the town of Tiptonville.

Our first stop in Tiptonville was to check out these abandoned beauties: 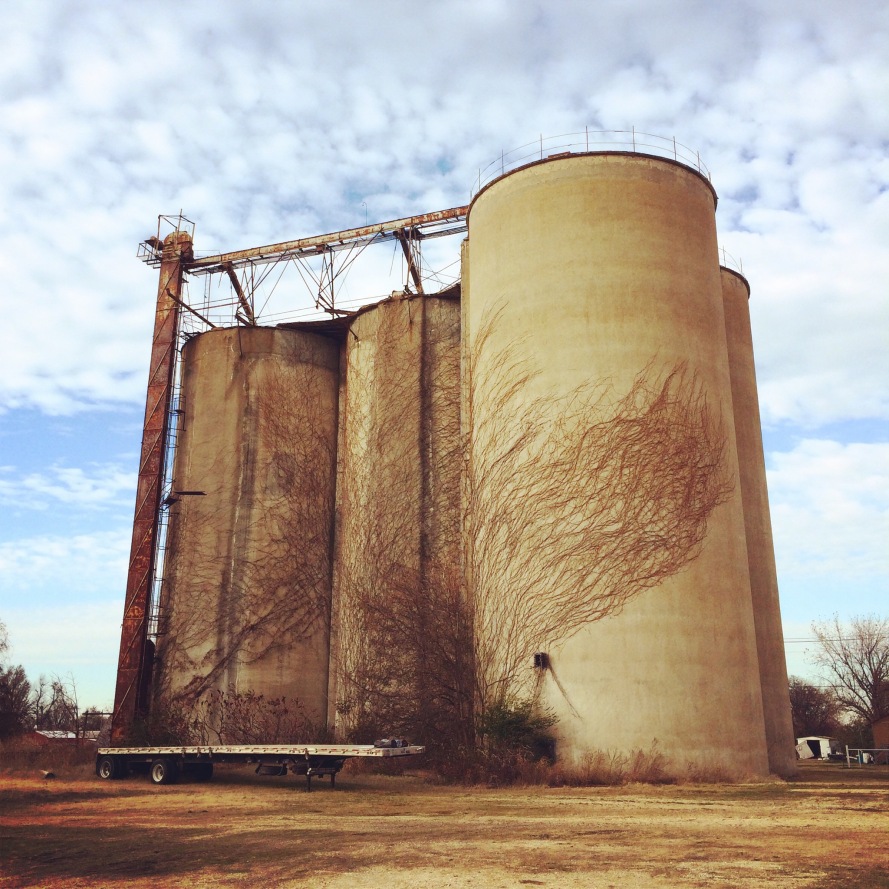 While the main structure is holding, the metalwork stairs and walkways are in various stages of decay, pieces of which have broken off and remain suspended in the vines that encircle the stacks. We didn’t get too close, fearing a sudden collapse and impalement. It was an eerie, haunted place that even the locals seemed to steer clear of. The usual debris found around these types of structures: beer cans, empty liquor bottles and random litter was absent.

John spotted a Dairy Queen in the distance; we had been surviving on car snacks until this point and had a hankering for a chili dog (well, one of us did…) Excitedly, we pulled into the parking lot, only to have our hopes dashed. The DQ was closed for the season. This was our cue to leave Tiptonville in the rearview, so after studying the atlas, John found us a route back across the river.

What seemed clear on the map was not clear on the ground. The main junction listed a large selection of state roads in every direction, with the exception of the one we wanted. Driven by fuzzy logic, we picked a route that was only 1 number off of the road we needed. It turns out that this is not a good strategy. After about 10 miles of clear country roads, we did reach the Mississippi, however the only option was to board a ferry…which was already chugging across the river. A road devoid of painted lines disappeared off to the right, following the river, which was our only other option.

It was a lovely drive, and after about 15 minutes we passed out of Tennessee into Kentucky.

Not particularly the direction we wanted to go, so we navigated back to Tiptonville for another go at it. Our second guess took us to an area of the map that was dominated by a question mark symbol. What’s out there? Nobody knows.

Back in Tiptonville for the third time, we pulled over and studied the map again. It seemed that our only other option, aside from reversing course and driving back to Dyersville, was to backtrack east and head up through Kentucky to Illinois and cross at Cairo, IL. A glance at the clock told us we had been driving in concentric circles around Tiptonville for the last hour, and the light was fading fast. We soaked up the last hour of daylight driving through beautiful country roads, with no other cars for company, until the sun finally set as we crossed into Illinois.

Due to a pre-trip celebration involving whiskey, John opted to be a passenger for the majority of the day. This meant I couldn’t particpate in the usual carstuff I am typically consumed with…studying the map, taking photos…I tried to multitask a couple of swervy times, but a rather pointed “Can I help you?” from John got me focused back on the road. I let my fiddling tendencies go out the window and settled back to enjoy the drive to Cairo. Surprisingly, this was a route I had driven before. In the spring of 2000, my dear friends and I piled into my Toyota Corolla and headed off on our annual road trip. We were headed to Chicago, and we had a week and a half to kill, so we spent a lot of time in the back country of Kentucky, Missouri and Illinois. The only things I remembered about Cairo was that 1) it was pronounced Kay-ro, 2) It gave us the willies and 3) the town limit was dominated by a huge set of metal gates, designed to shut off the town if the Mississippi flooded. The odd part was that the gates seemed to be designed to shut Cairo in, not shut the river out. It’s difficult to tell, as the Mississippi curves around so much and, as silly as this sounds, it’s hard to keep track of where it actually is. There is obviously a wormhole around Cairo, as we crossed the river 3 times while headed in the same direction, on the same highway.

Two and a half hours later, we reached St. Louis. The plan was to visit the Gateway Arch early the next morning and then hightail it off to Iowa City, however a nasty noise coming from the rear of the jeep threatened to delay us a little bit. It was too dark to really see what the problem was, and too damn cold to fully investigate…so we crossed our fingers and went to bed, anxious to see what we would discover tomorrow morning.

The Jeep elves has neglected to fix the noise while we slumbered. A nasty, grinding sound was emanating from the back wheels…which suggested a brake problem. Our early morning visit to the Arch was promptly abandoned and we set off to find a Jeep dealership. 3 mechanics later, we finally found a Firestone that had an opening within the next two hours. Lost in St. Louis suburbia, we stamped around a series of strip malls in the freezing cold and ended up at a McDonalds for brunch. One Egg McMuffin and a double jalapeño cheeseburger later (see if you can figure out who ate what) we still had a couple of hours left to kill while Black Betty got her new brakes installed. Fortunately, there was a Cinemark 8 in the adjacent strip mall with $3 matinees, so we opted for warmth and butterfinger bites to tide us over. If you’ve always wanted to see Denzel Washington dispatch sociopathic Russian mobsters with a variety of garden tools, you should watch The Equalizer. Nuff said.

After Betty got her new shoes, we finally headed over to the Gateway Arch.

The Arch has a big birthday coming up; 50 years old next year! Standing at 630ft tall, with it’s two feet standing at 630ft apart, it is the tallest stainless steel monument in the world. Since we had been delayed quite a bit, we only really had time to jet up to the top and come right back down, missing the opportunity to explore the museum at the base.

I don’t like heights, but I wasn’t going to get away with just admiring the arch from the bottom. To get to the top, you have to travel for 4 minutes in a capsule that supposedly fits 5 people. Seeing as the pod is roughly the size of a couple of coffee tables stacked on top of each other, I would recommend only going two at a time if you wing it. 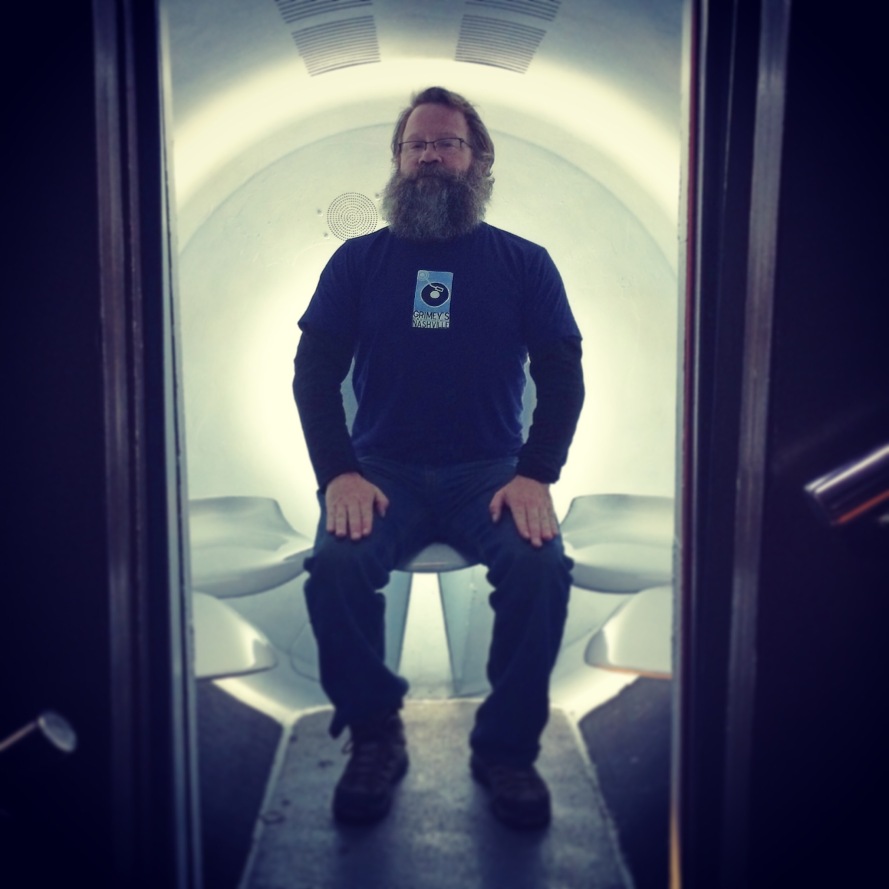 Knowing I was about to be wandering around at 630ft in the air with nothing below me, my pores had gone into overdrive, pushing sweat out in alarming quantities…I also had my silk long johns on under my jeans, so I rapidly overheated. The space capsule we were in was incredibly hot, so I was a blubbering sweaty mess by the time I was peeled out at the top. If you have ever owned a cat, you know that when you introduce him/her into a new space (like a new house, or the vet’s office) your cat will try to walk as close to the ground as possible. That’s what happens to me when I am placed at great heights. All of my concentration is funneled into grasping the floor with every foot muscle available, I tend to crouch low to the ground and if there’s a ledge to hug…I am on it. I managed to shuffle over to the observation windows and take a peek. Long story short: it’s VERY high.

I slogged through about 5 minutes at the top and then happily climbed back into the capsule. 3 minutes later, I was back on solid ground.

Even though we did not have time for the museum, we did take some time to purchase a large amount of fudge at the gift shop in the lobby. We definitely have our priorities straight.

Thankful to be back at sea level, we wandered around the base for awhile.

With only 2.5 hours of daylight left, we started our drive to Iowa City. We headed north on a road that hugged the Missouri river, which was lined with field after field of corn and cotton.

We made it to Hannibal, MO about 15 minutes after the sun had dipped behind the horizon. Hannibal is the official home town of Mark Twain, but New London (a small community just outside of Hannibal) is getting into the spirit as well, proven by this bizarre plaster statue. 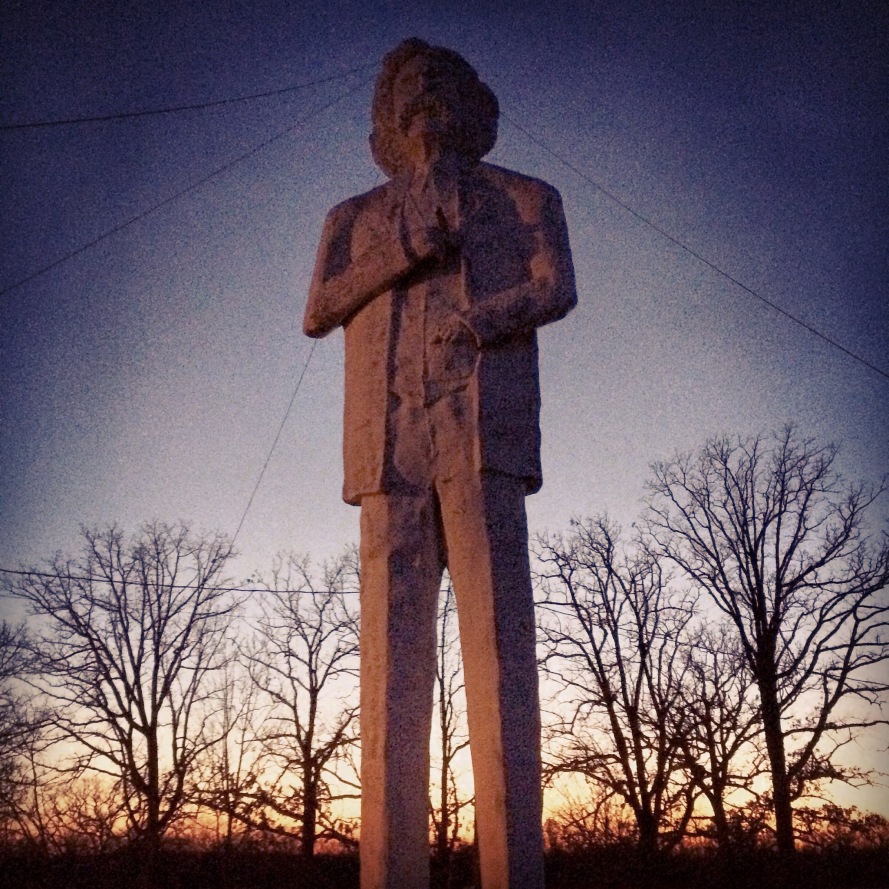 We landed in Iowa City around 7:45pm. We were very lucky to be staying with good friends for a couple of days before heading on to Des Moines. Happy to be out of the car, with a warm bowl of lasagna soup pushed into our hands, we settled in for a night of good whisky and companionship. Does it get any better? FYI – it does…and it involves pie shakes. More on that tomorrow!