Wonderful Wyoming – I Only Needed 24 Hours To Fall In Love

We left Rapid City by way of the Rapid City Dinosaur Park. Is there a better way to start the day? I think not.

Built in 1936, the park contains seven friendly sculptures that overlook the city.

We had the park all to ourselves…I suppose everyone else was bargain hunting. As you can see, they are cheerful and green; I hugged all of them.

If only dinosaurs were still around, giraffes would have someone to look up to. 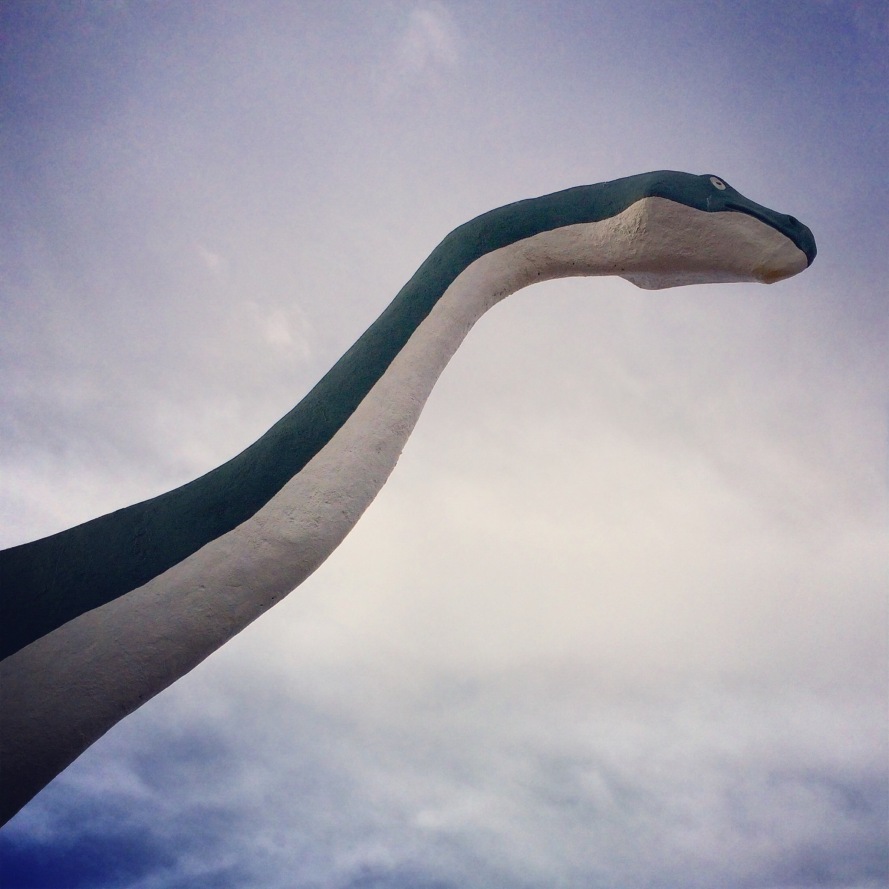 The plan was to drive as far into Wyoming as we could get before it got dark. We passed Mt. Rushmore and Custer again on the way out of South Dakota. It’s a beautiful state…the Badlands and the Black Hills, both with remarkably different landscapes, sit within 50 miles of each other, and the vast expanses of nothingness in the middle are beautifully desolate and peaceful.

On the way out, we rode behind this guy and his best friend. What a great way to travel!

Our avoidance of interstates has definitely made the trip so far, so we plotted a course through Wyoming that included 100 miles of the Thunder Basin National Grassland.

Wyoming is the least populated state with just over 500,000 people in 97,818 sq miles. To put that in perspective, there are about 600,000 people in Nashville and in the entire 13 county Nashville metropolitan area, there are 1.5 million people. For the two hours we passed through Thunder Basin, all we saw was grass (duh) and small snow covered buttes.

About an hour into our trip through the grasslands, we passed this highly disturbing sign: 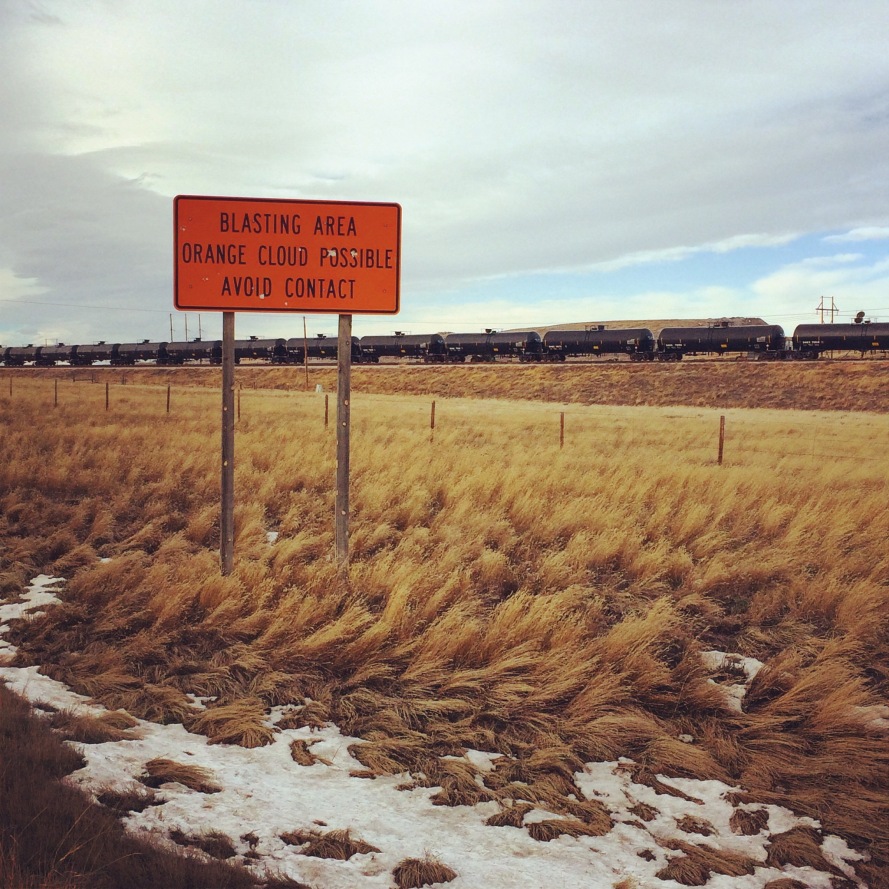 Little did we know, we were about to come upon the Black Thunder Coal Mine, a surface coal mine working on one of the largest deposits of coal in the world. 8% of America’s coal comes from this coal supply and Black Thunder is the largest mine in the world. 20-25 trains are filled with coal per day, and these trains go on for miles.

Thankfully, we made it past the mine without coming into contact with any mysterious orange clouds. YIKES!

We passed out of the grasslands by lunch time, so we stopped off at a rest area to eat our packed lunch. We got to experience the famous ‘wind sweeping down the plains’, although I think Wyoming has Oklahoma’s wind speed beaten. In short, it’s f*cking windy out here. 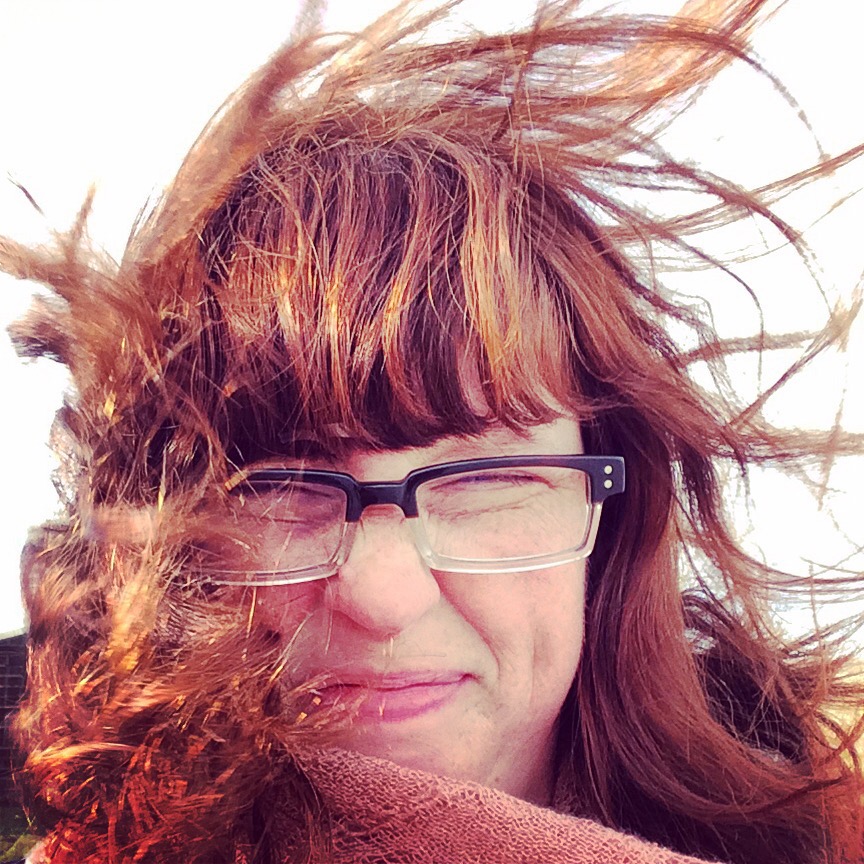 Having made great time, we know had a decision to make: Cheyenne or Laramie. Both were equal distance from us, but Laramie one as it required the least amount of interstate. We only had to get on I-25 for about 40 miles…but they were a fairly stressful 40 miles. Winds were gusting at 50+ miles per hour, and several times the jeep was moved deftly to the left about 2ft by the strong gusts. Black Betty is a soft top, and her canvas roof was rippling and creaking…in a sort of ‘it might catapult into the sky at any minute’ way. John laughed as I clung onto the metal frame, intent of keeping the roof attached. “If it comes off, your hand is probably going to come off with it”. Needless to say, I kept my hands tucked firmly under my legs from that point forward and tried to hold the roof on by will power alone.

The roof did not fly off. This means I may have mastered the force.

We broke off the highway with about 60 miles to go. Once we were off of the plain, the wind cut back about 50%, so we were only dealing with gusts around 25 mph. We were definitely in Ranch Land.

We arrived in Laramie just before dark and checked into the Travel Inn, a dated little motel, oozing 1950’s charm at a bargain price ($45!!!). Beers and burgers were consumed heartily.

In the morning, coffee, cold meds and bagels were purchased and disposed of appropriately. John is a fan of the everything bagel with Garlic Herb cream cheese, which I think should be handed out in a hermetically sealed bag, so as not to contaminate the other innocent bagels in the bag, but not everyone agrees with me. We took a tour of downtown Laramie, which completely stole my heart away. 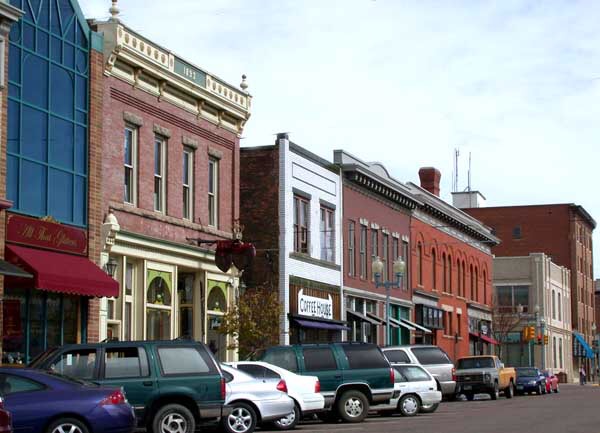 Shoe shops, boutiques, western wear outlets, saloons, independent coffee roasters, bistros…all lined up, covering about 5 blocks. Also…there were tons of people up and about at 10am on a Saturday, buying things from said shops. Cowgirl Yarn was packed full, and there were men in there. Buying yarn!!!…not just moping around by the door, checking their iPhone, while their significant others touched every skein in the shop. The shopkeeper knew everyone by name. This amazing sight, plus the fact that the cashier/pharmacist at the drugstore looked like my Celebrity Boyfriend Bradley Cooper, left me happy in the knowledge that if John ever kicks me to the curb…there’s a home for me in Wyoming.

Leaving Wyoming behind was sad. Even though we had only been in the state for about 24 hours, I had seen enough to make me come back soon and explore the rest of it’s beauty.

We made it safely to Denver (which has an enormous bear downtown) and spent the afternoon at an auto show and eating pizza. We plan to go to bed at a decent hour as we will rise early tomorrow, and drive to the Rocky Mountain National Park. We’ve got to get all that good nature stuff out of the way before the interesting football starts. Unfortunately, the Broncos have an away game tomorrow, but I feel as though it’s our duty to join the masses of Denver in a bar somewhere tomorrow. Cheers!