You are having a pretty awesome Sunday when you get to fit in a National Park and watch two great football games. Due to the season, the majority of the Rocky Mountain National Park is closed to vehicles, but we still found plenty to gawk at.

RMNP is an hour and a half northwest of Denver, the eastern entrance located in Estes Park. EP’s sister city is Monteverde, Costa Rica…so we felt obligated to noodle around for a while.

Our first stop was to visit the Stanley Hotel. This is the place that inspired Stephen King to change the locale for The Shining from an amusement park to the isolated Overlook Hotel.

This is not the hotel from the Stanley Kubrick movie, that title of honor belongs to the Timberline Lodge in Oregon, although only a few exterior shots of the hotel are in the film. Even so, the location did evoke a little redrum in me, but that was probably due to the oblivious couple taking selfies of themselves in every possible configuration: in front, to the side, on a wagon, on the steps…
Hey! Captain Me-Planet…get out of the way!

We entered the park via Trail Ridge Road, which is the highest continuous highway in the US, with a maximum elevation of 12, 183ft. In winter, only 8 miles of the highway is open on the eastern side of the Continental Divide, but there’s plenty to see on those 8 miles. 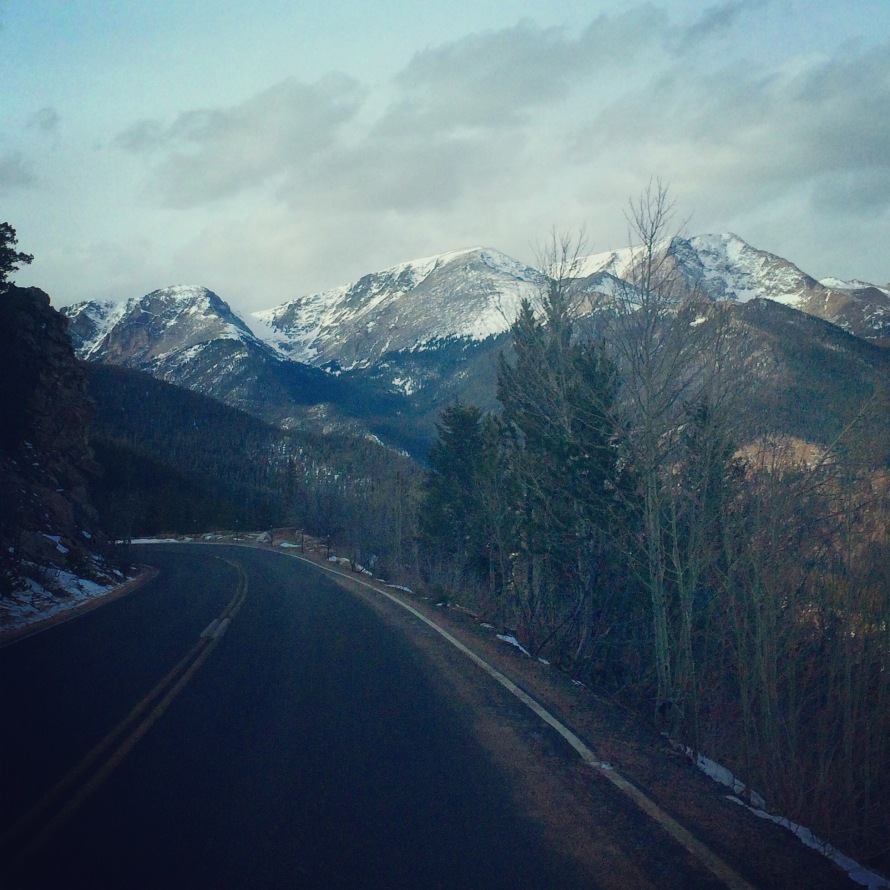 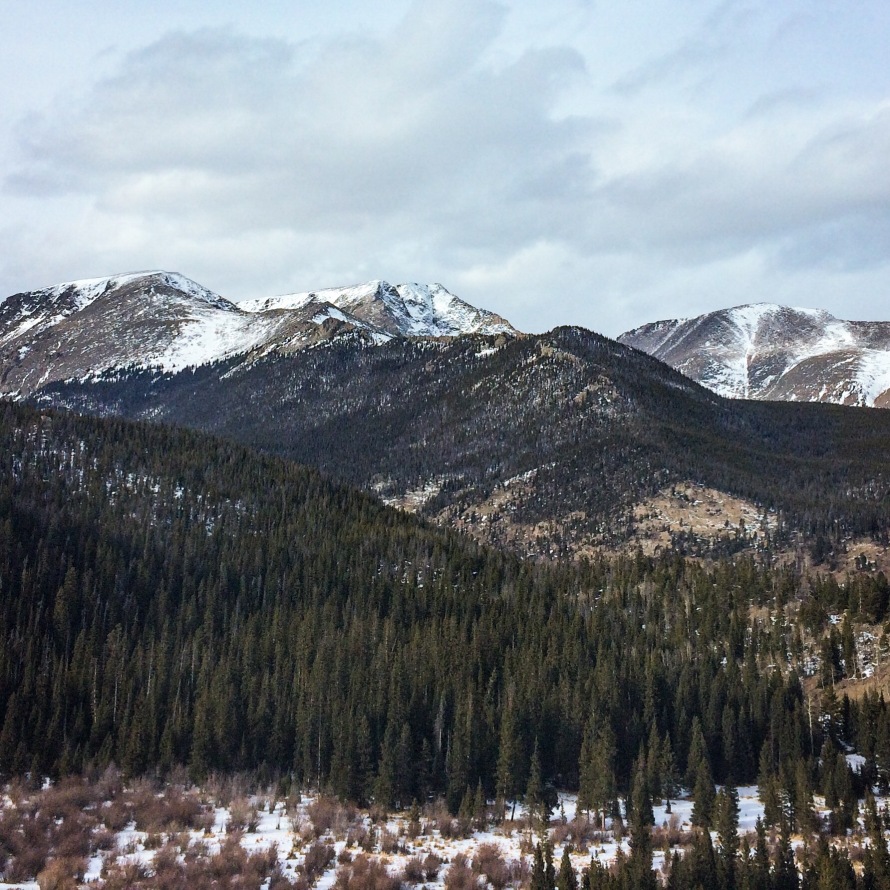 Our drive up the mountain is included in the below video. Once we reached the top, we donned our hats and gloves and stomped around past the road closed sign in the snow. Of all the parks we have visited so far, this was the most crowded…but that means there were only 15 cars at the top as opposed to 2. We were the only folks that were walking up Trail Ridge, so we had the views all to ourselves. 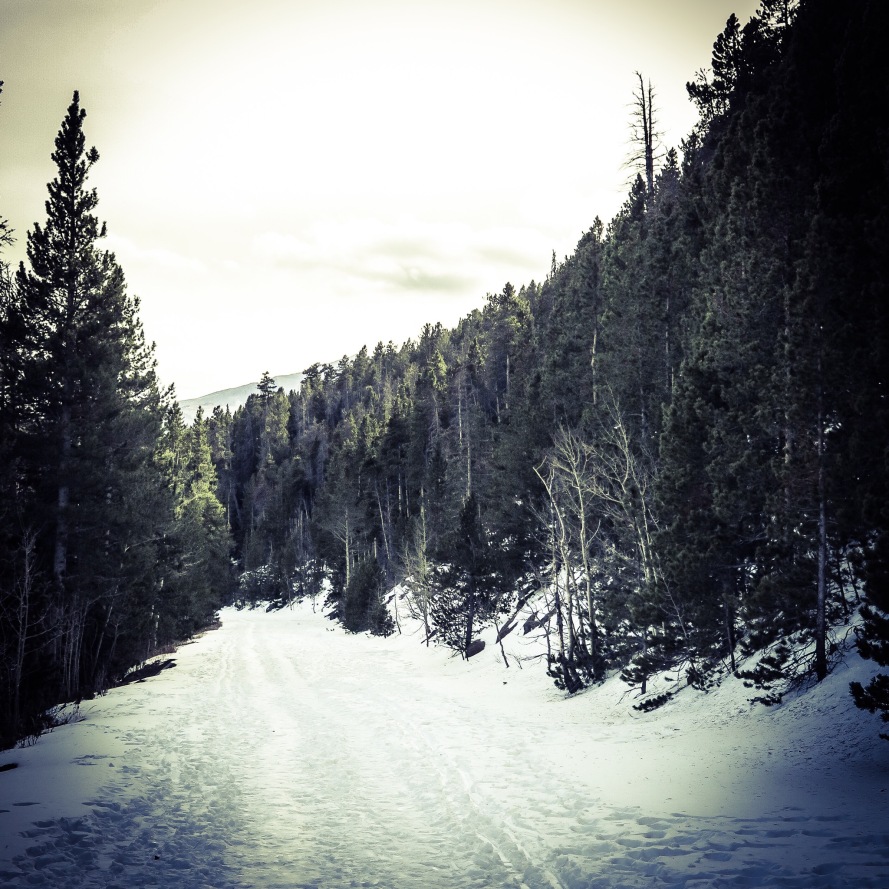 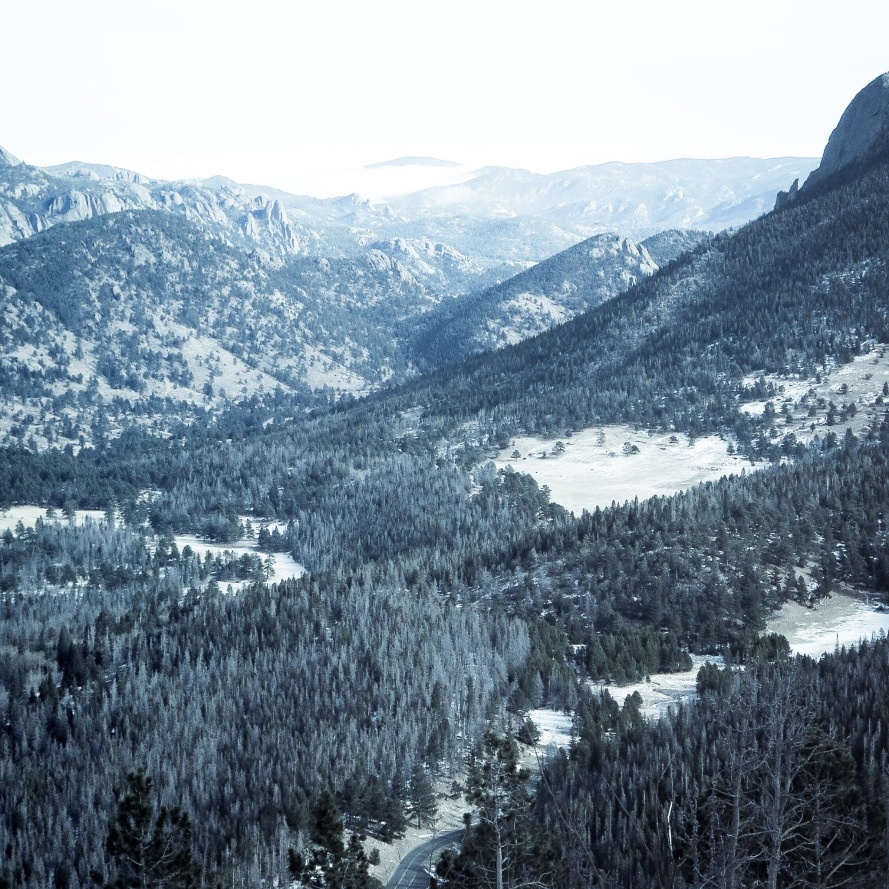 These days, I can’t stop taking pictures of trees…these pleased me immensely; their roots were partly exposed, digging into the side of the mountain. There are approximately 20 billion conifer trees in Colorado, and I wanted to stop and photograph every one of the them. 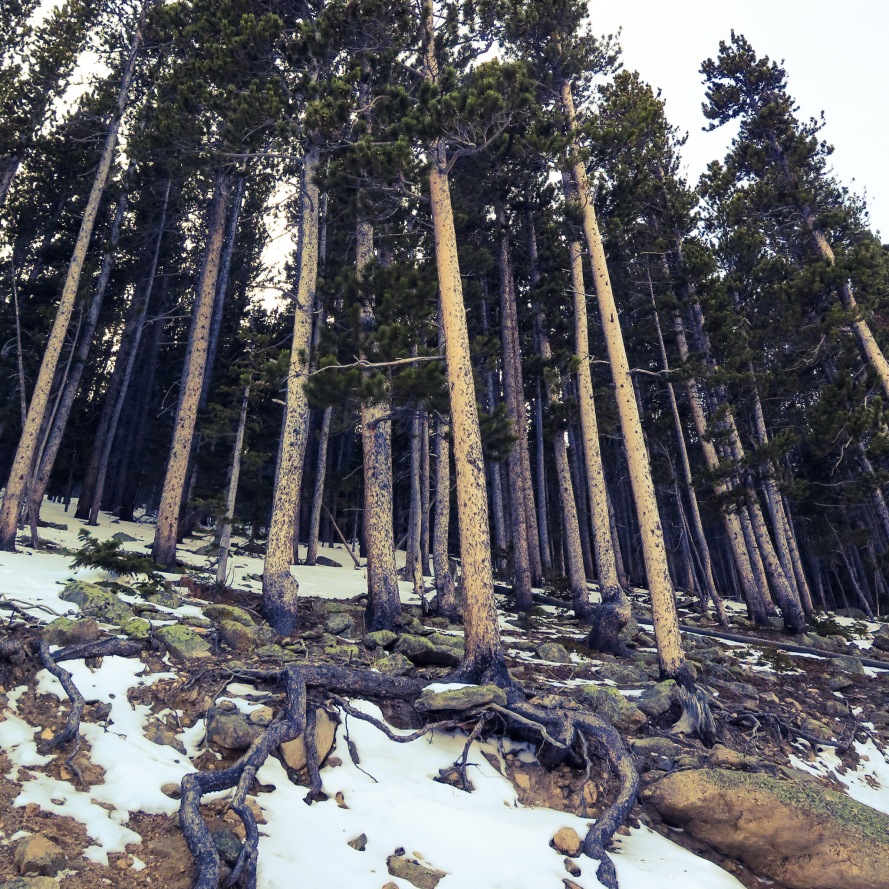 The Many Curve overlook is a pretty magnificent place to stop and spend some time with the silence. It’s surprising to me how many people drive up, get out, take a picture and then drive back down without pausing to breathe in the air, admire the view and let nature soak in a little bit. Everyone seemed anxious to get back down as fast a possible. Personally, there’s too much to take in and too many inviting rocks to scrabble around on to only spend 30 seconds out of the car. 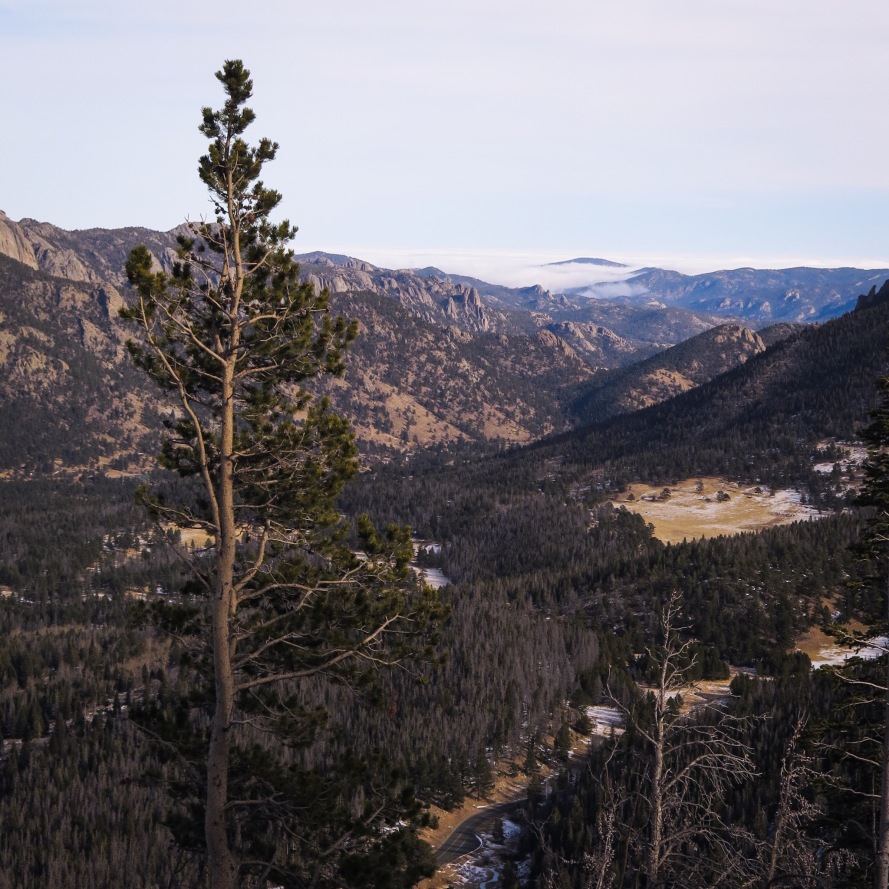 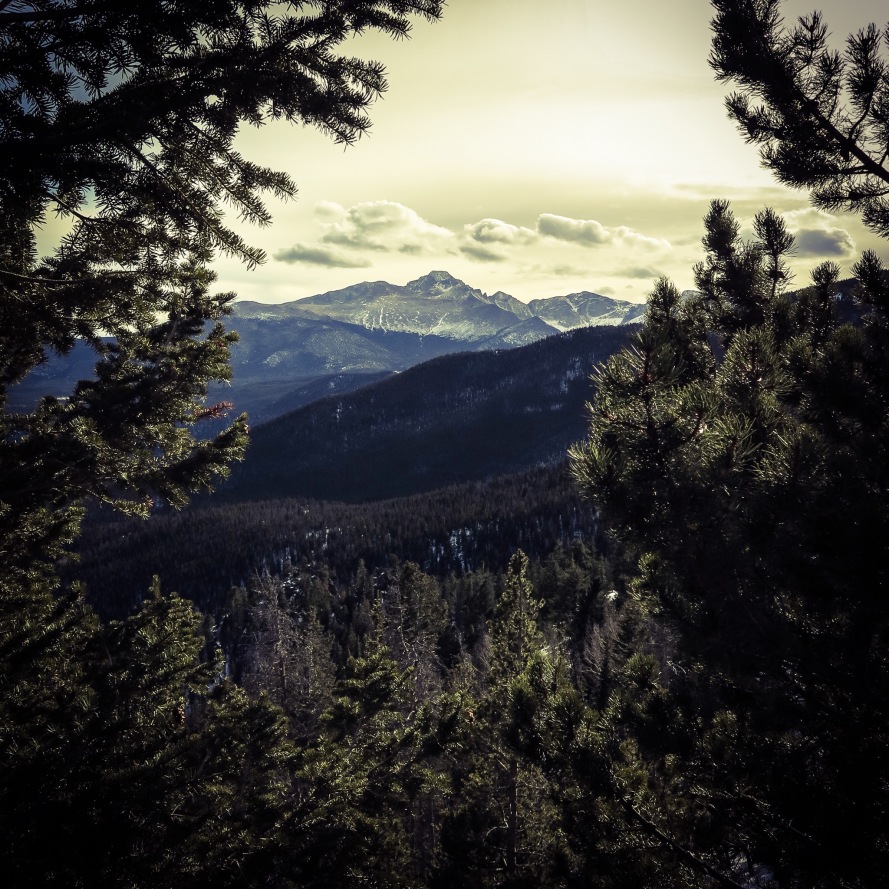 The only road open in it’s entirety is Bear Lake road, which terminates at…guess what? Bear Lake! At 9000+ft, Bear Lake is always frozen in the winter, and while there were footprints on the snow out there, I refused to venture out onto the ice. 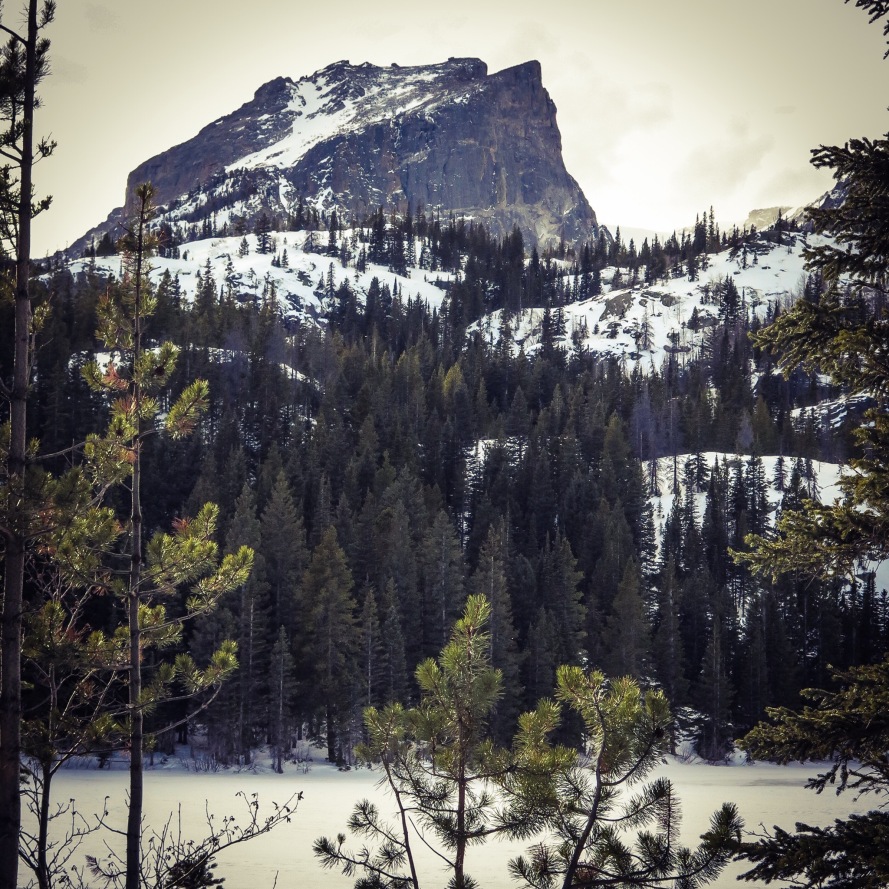 On the way back down from Bear Lake, we passed a huge herd of grazing deer, enjoying some lunch in front of the Rockies. 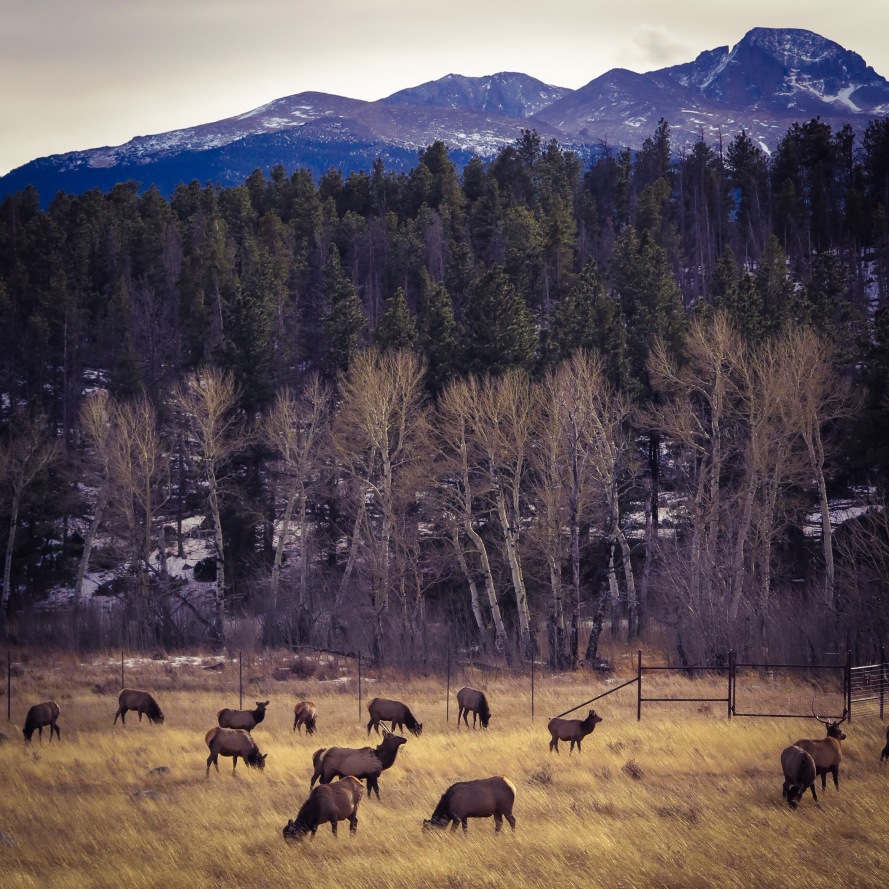 They inspired us to find some lunch of our own in Estes Park, so we headed back down to the lowland for some grub eatin’ and football watchin’.

Post dinner and a Packers victory, we headed back down the hill to Denver via a nasty, foggy mountain road. This took a little longer than our ascent, as I had volunteered to be the designated driver for the evening and the visibility was incredibly limited. It seemed as if, after every curve, a new Caution! sign was waiting for me. Excellent…as if the pea soup I was driving through wasn’t enough…Deer Crossing for the next 10 miles. Behind curve # 2: No Shoulder for 5 miles….great! What else do you have? Falling Rocks? Check! Steep Grade? Count me in! We made it back to Denver in a couple of hours, just in time to plant ourselves in a local watering hole to watch the Broncos beat the Chiefs with the Denver natives, which was fortunate, as I was due for a strong drink.

We said goodbye to Denver the following morning, and headed south to visit the Black Canyon of the Gunnison National Park. Due to the fact that Black Canyon is on the other side of the continental divide, we had to head down a little further south to find a highway that was dry enough to cross the mountains. Even though we didn’t reach the park that day, we did get to see some spectacular scenery along the way, lit by a very bright sun. The trees along the highway were decorated in their picture-perfect Christmas card outfits…they even glittered when the sun struck them. 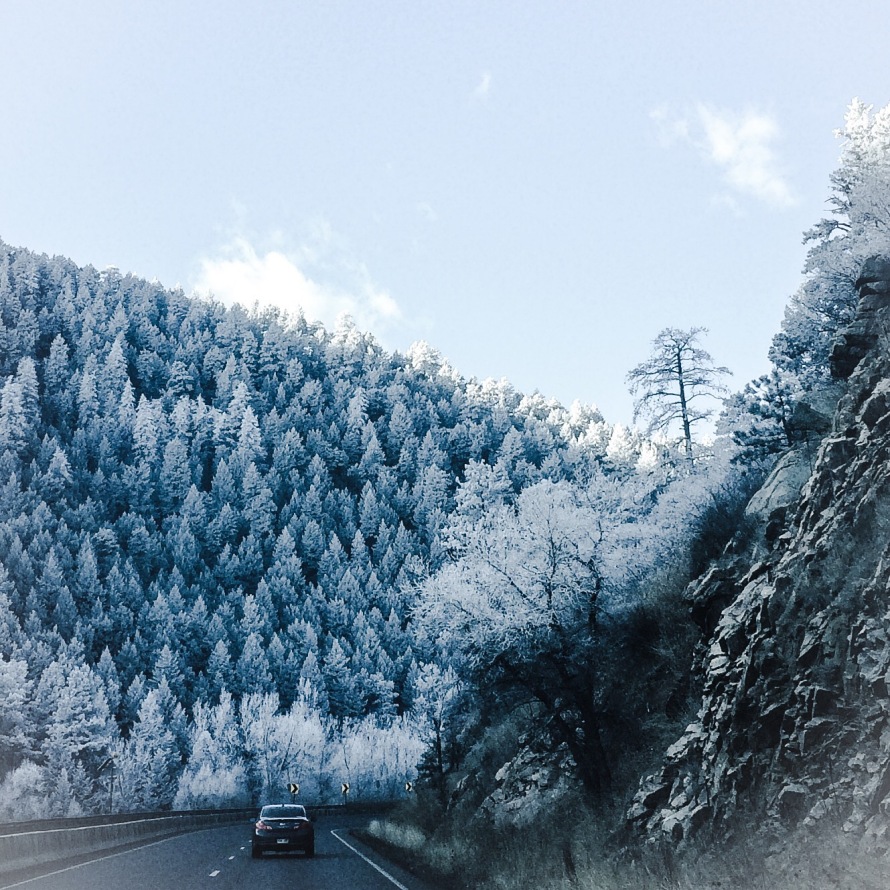 With the Rockies always by our side, we passed drove many miles, isolated from most of the population of Colorado, a-top high plateaus that alternated between being covered in snow to drying out in the bright sun. 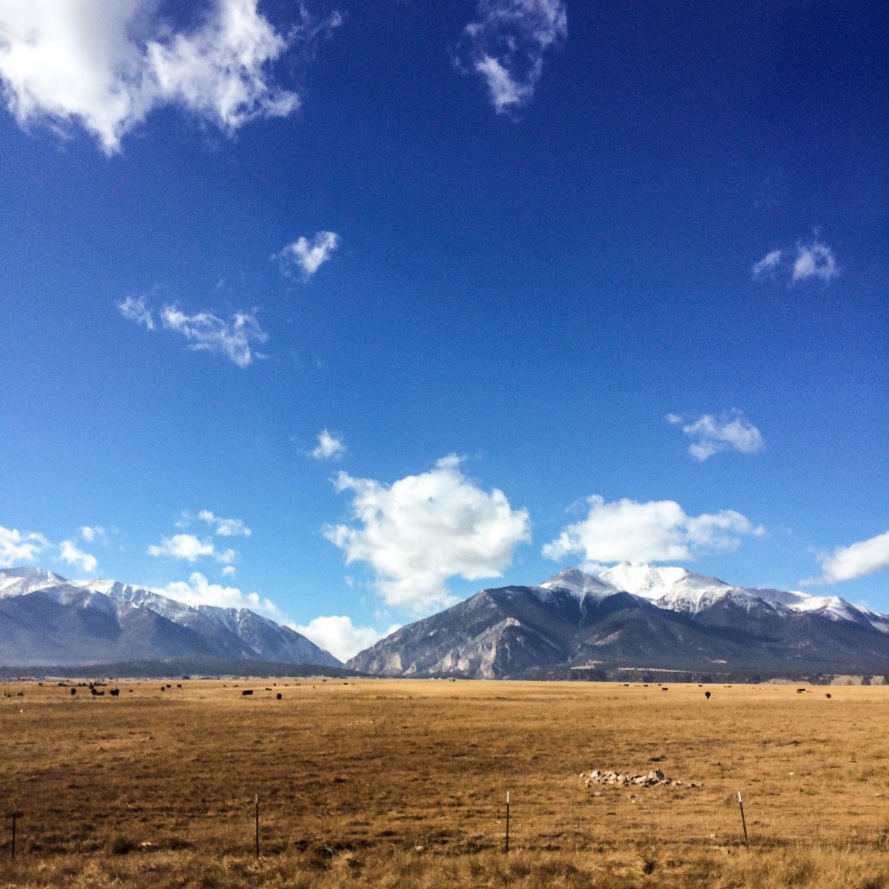 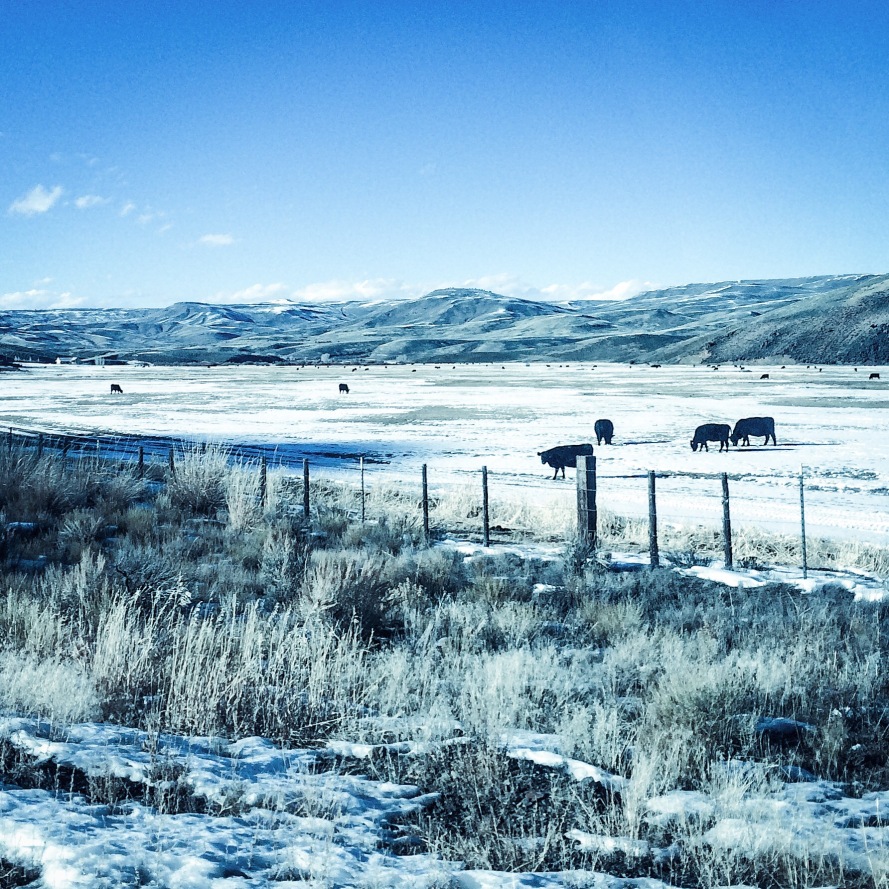 We’ve seen a surprising number of 16 wheelers on these lesser known highways; I suppose truckers get bored of interstates as well. While I applaud their choice to take the alternate route, I don’t think I would be too keen on navigating a huge truck around some of the roads we wound through on our way to Montrose. 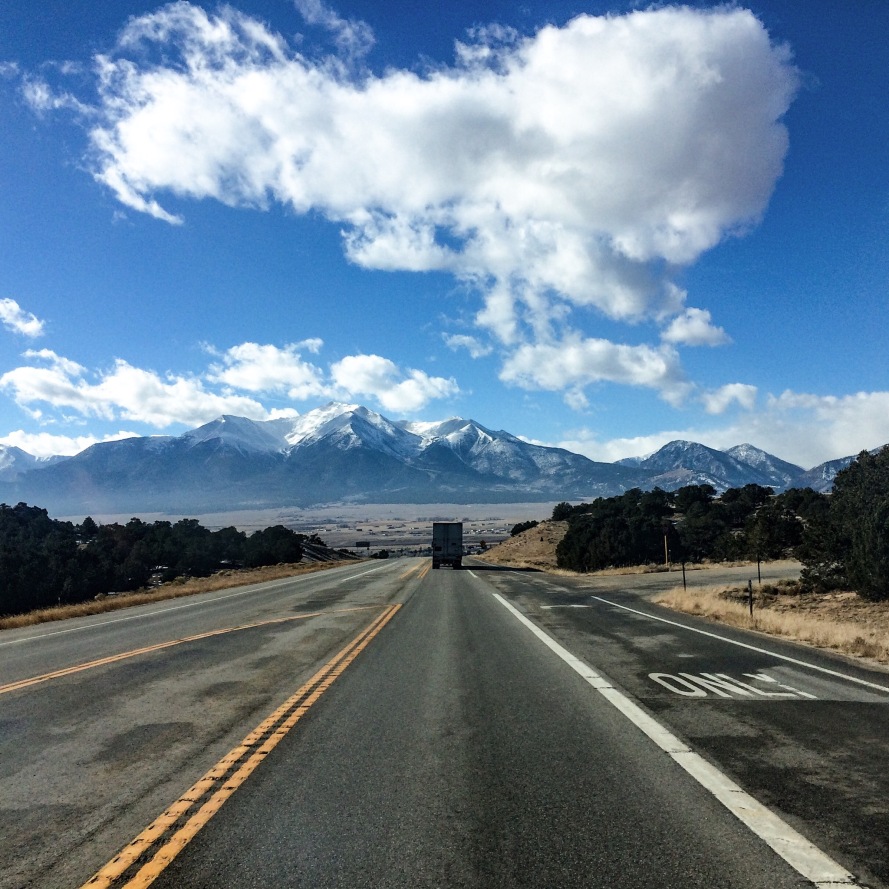 It became clear that we were not going to make it to Black Canyon before dusk set in, so I backed off the gas pedal and relaxed into the drive. The sun had been shining brightly all day, but around 3:30pm, it was low enough on the horizon to throw an incredible amount of glare off the snow. The sun was impossible to hide from, as the roads changed directions every half mile. There was a constant shuffling of visors, sunglasses and ball caps to try an avoid the glare. 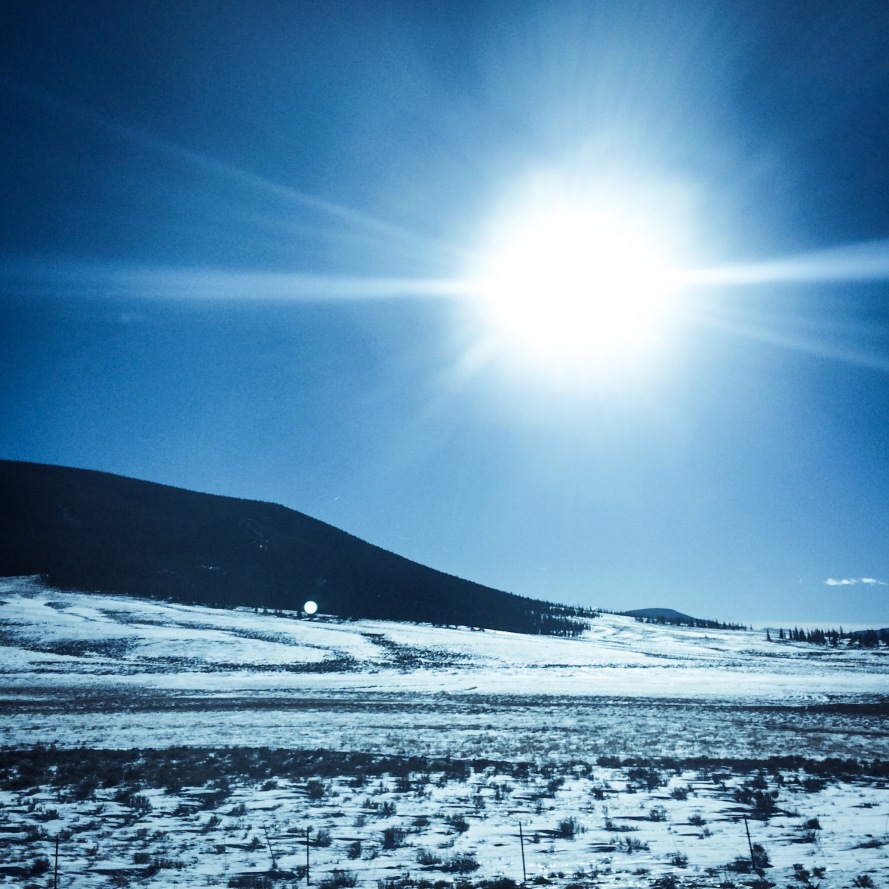 30 miles outside of Montrose, we passed through the Curecanti National Recreation area, which is home to the Blue Mesa Reservoir, the largest body of water in Colorado. The water started off frozen, with a couple of guys ice-fishing on the eastern tip. Further in, the ice had melted, leaving the water and the sky to compere for the ‘bluest thing in existance’ award. 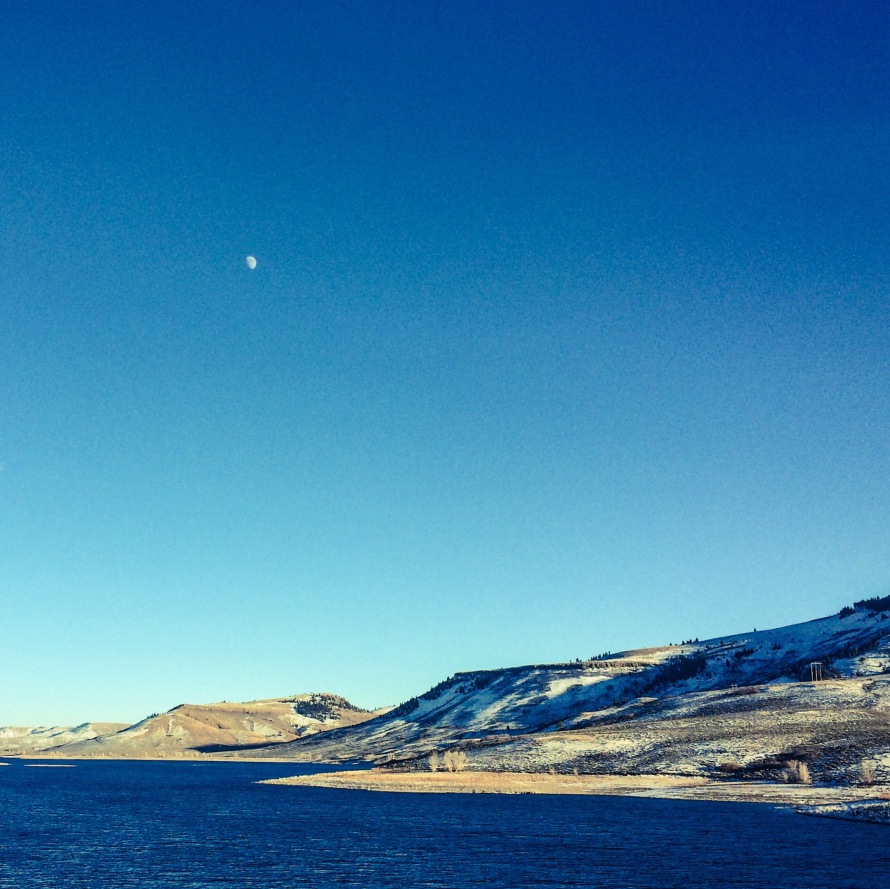 Just as we were catching our breath, the Dillon Pinnacles appeared, bathed in light. The Pinnacles are made of eroded rock, which was spewed from the volcanic West Elk Mountainsa about 30 millions years ago (btw, rock is alway spewed from volcanoes, much in the same way tear-gas is always lobbed). 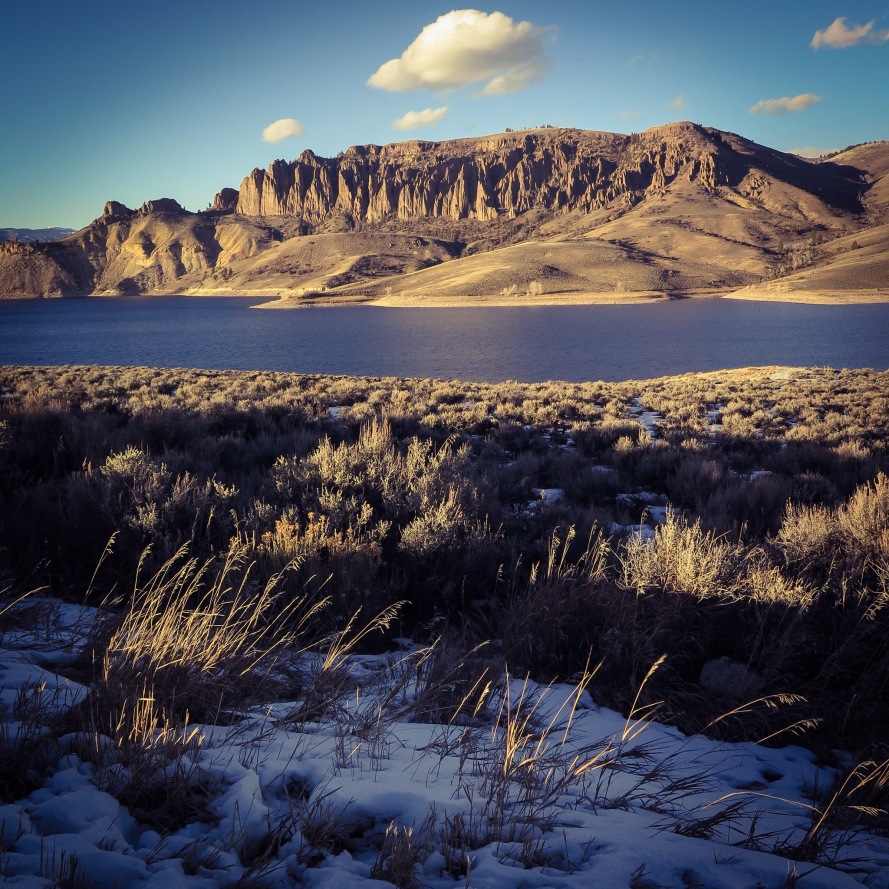 It’s worth the drive from wherever you are to see this geological beauty. It’s amazing that grand sights like the Pinnacles and Blue Mesa are almost hidden along lesser known highways…I think of the number of people that have passed through Colorado on I-70 without the slightest idea that these wonders exist just 40 miles south. Abandon the interstate system, folks!

We bedded for the night in Montrose, just west of the Black Canyon National Park. Fortunately, Montrose had a sports bar, so we were able to watch the Dolphins defeat the Jets over a plate of nachos and alligator nuggets. Three gentleman to the right of us were involved in a non-timed eating competition, featuring $1 tacos. The winner ate 20 tacos. It was impressive, disgusting, and I pity his roommates.

Next morning, we headed back to the Black Canyon National Park. BCNP is a new National Park, upgraded from National Monument status in 1999. The canyon’s name is due to the fact that parts of the gorge only receives 33 minutes of sunlight a day, leaving the walls shrouded in darkness. The greatest depth is a stomach-churning 2,722ft. Here, at Gunnison Point, the river runs 1840ft below the outlook. 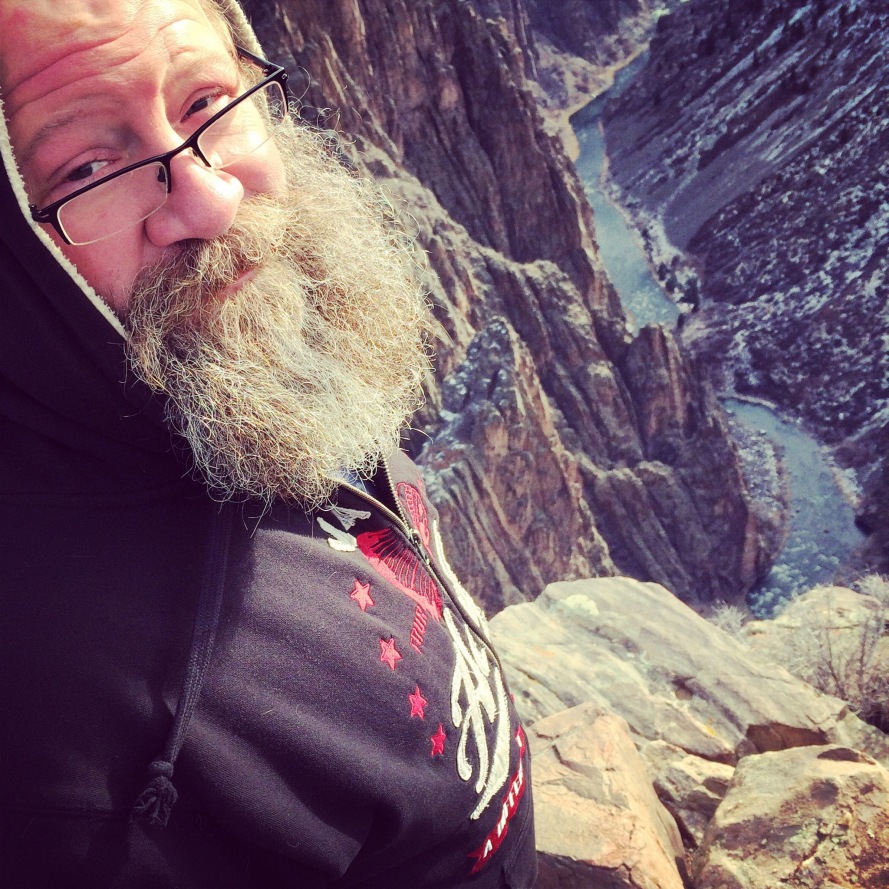 The lone park ranger at the visitor center was overjoyed to see us…I imagine his days are very lonesome in winter as we were one of 3 visitors in the entire place. The South Rim road hugs the lip of the canyon for 6 miles and offers numerous scenic overlooks that left our knees very wobbly. The Painted Wall, seen below, is the highest cliff in Colorado. From river to rim, it stands 2250 ft; the Empire State building would be dwarfed by the rock, reaching just over halfway up the cliff. If you stood on your tippy-toes on the top of the Sear’s Tower, you would still be looking up 800ft to the rim. 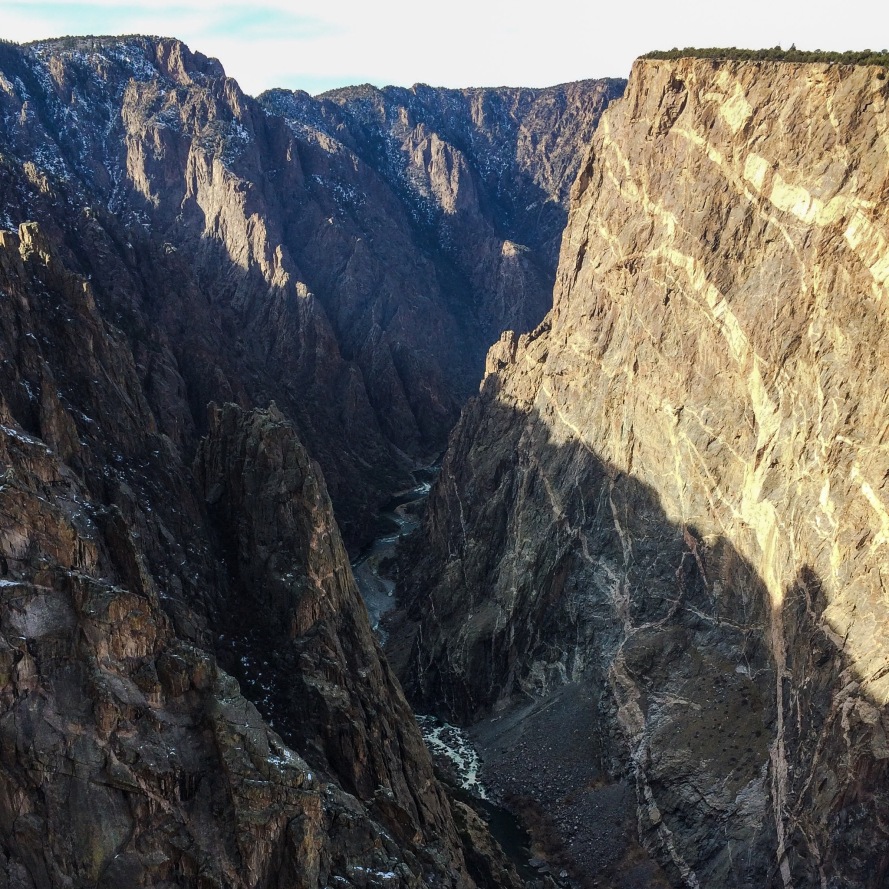 Standing on the plateau at Sunset View, we looked into it’s dreadful depth for a long time. The Gunnison river snakes through the bottom of the gorge, dropping an astounding 240ft per mile at Chasm View, and you can hear the rapids from the lip of the Canyon. It’s scary, y’all. 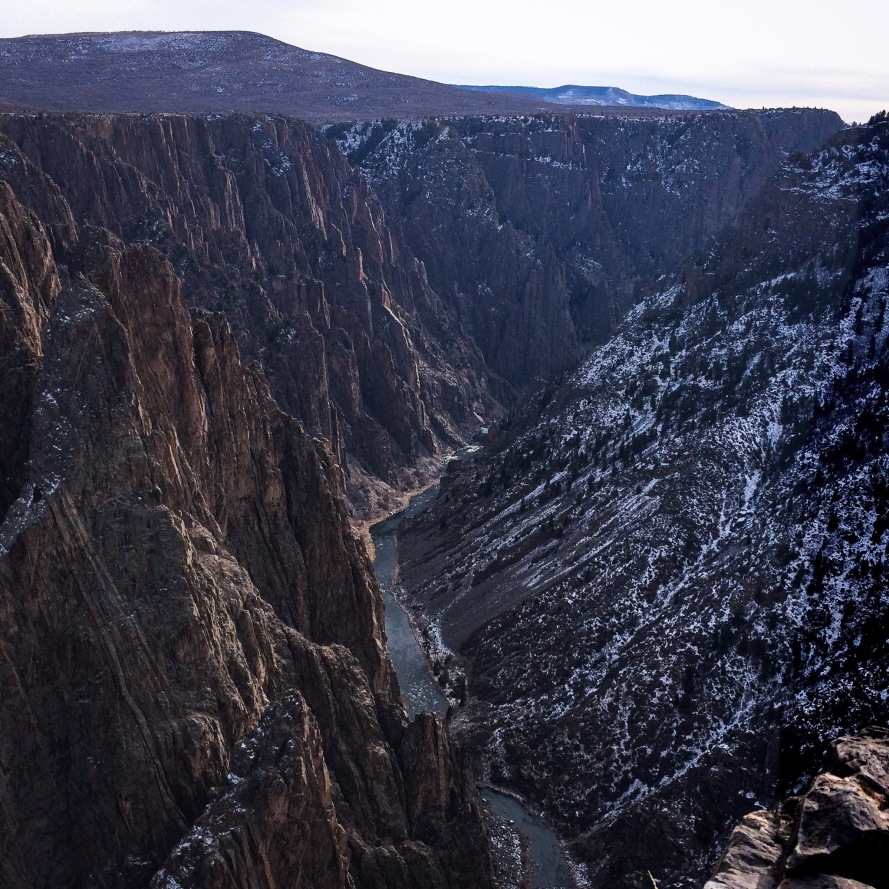 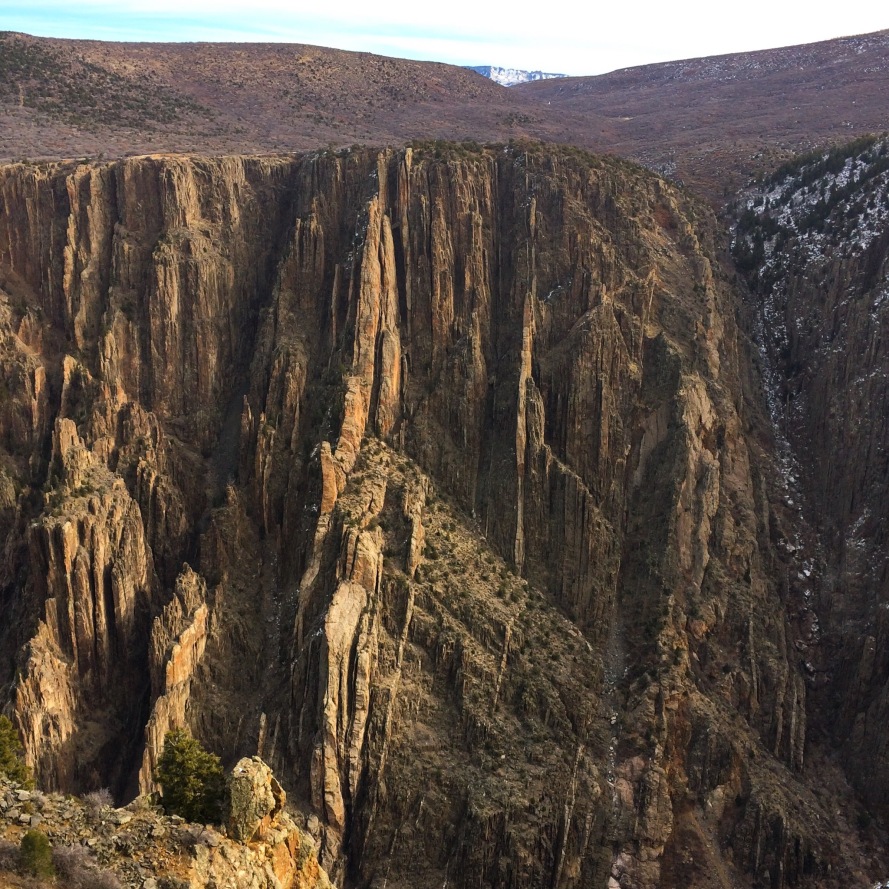 The landscape on the plateau is weird and stunted. The tree here seem to be wrenching themselves out of the ground, as if they are trying to escape the dizzying depths below them. 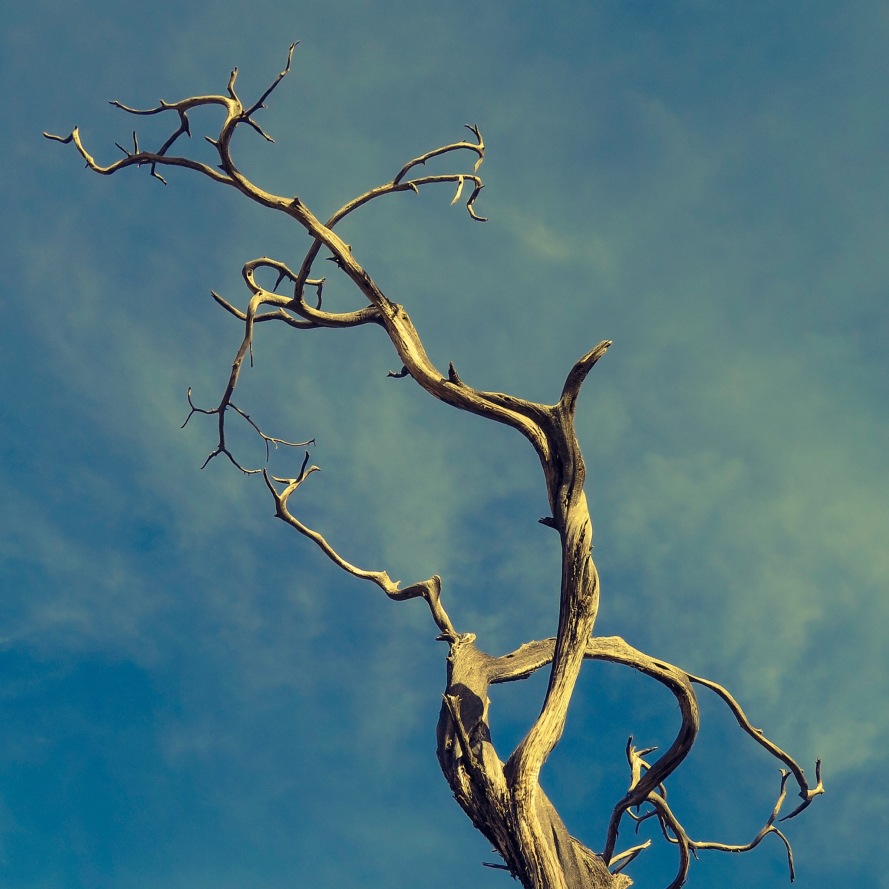 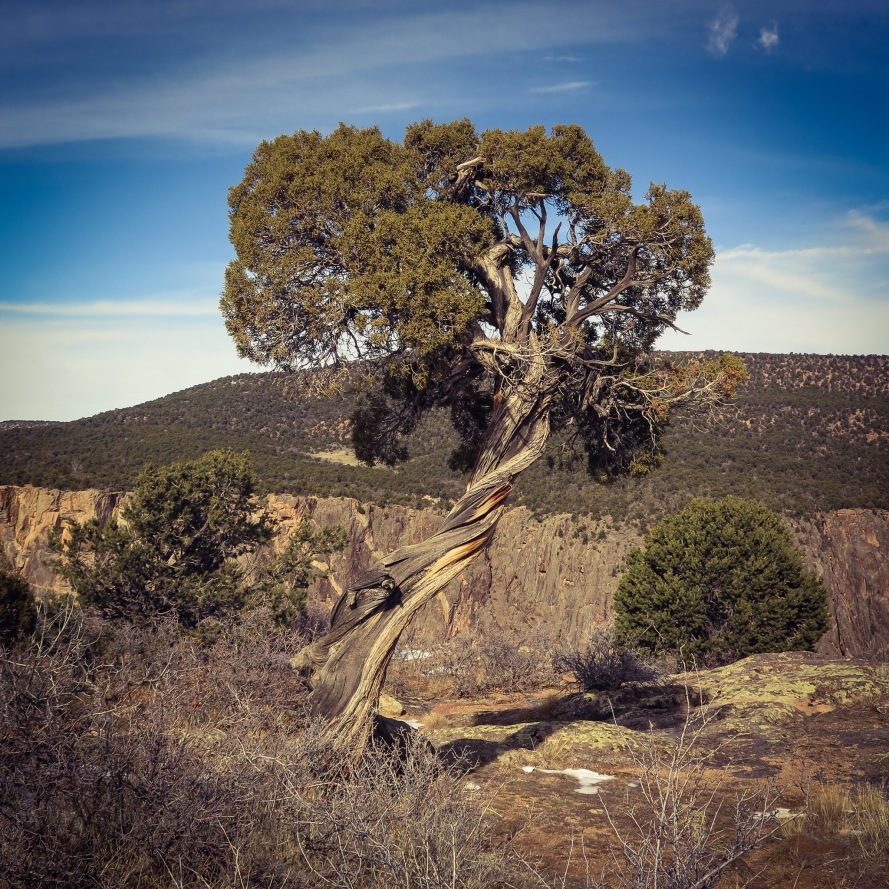 The beautiful view looking east towards the Rockies, almost made me forget the terrifying plunge behind me….almost. 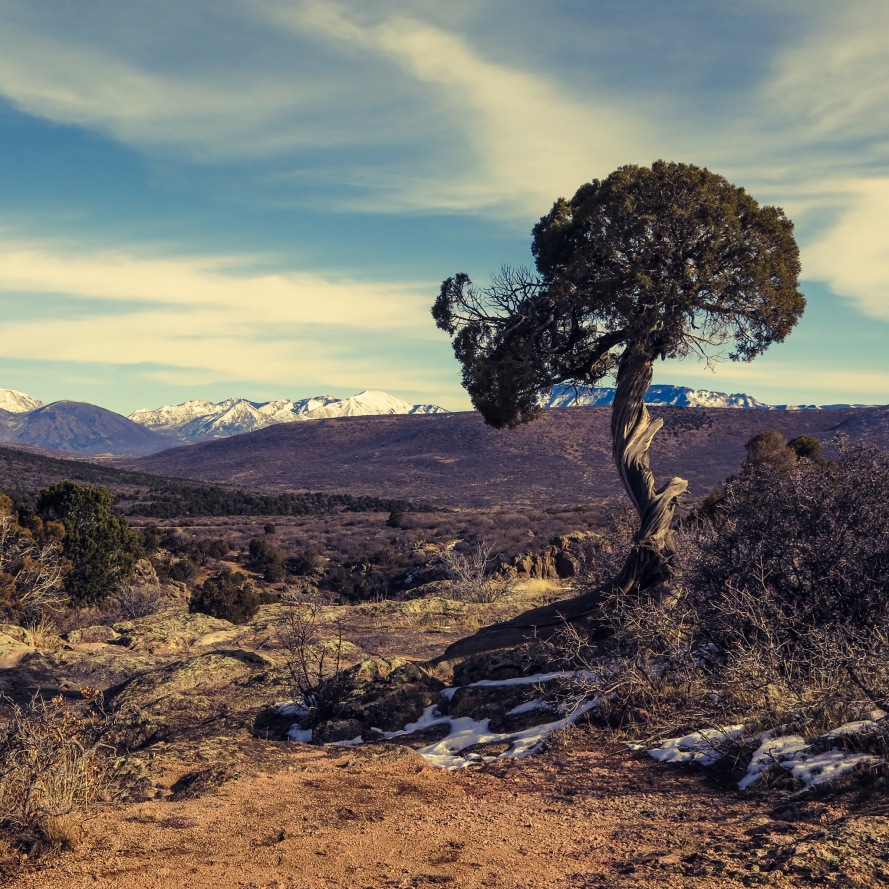 We had many miles to go before Salt Lake City, where family awaited us with open arms and delicious beer. During our international travels, we met many folks from around the world who, after learning we were from the States, would ask us what to do if they visited America. Our recent journey through Wyoming, Colorado and Utah confirms our answer which, as immortalized by the Village People, was always “go west!”