At the end of the long drive from the Black Canyon, we had family waiting. My step-sister Dana and her lovely family (husband Zach and son Eli) welcomed us into their Salt Lake City home and we ate, drank, and helped out with homework. The next morning came quickly, and we spent the day exploring Salt Lake City.

We made lots of new friends on our recent travels through Europe and South America, and many of them would ask where they should visit in America. I always gave them the same advice, which is “rent a car, drive all over Utah”. Utah is a beautiful state, containing five huge national parks, each of which somehow contains terrain different than the others. Becci and I have previously visited three of those five parks, and I love visiting this state.

Salt Lake City is the capital and largest city in the state. The city was founded in 1847 by Brigham Young, Isaac Morley, George Washington Bradley and several other Mormon followers, who irrigated and cultivated the arid valley. The city is so-named due to its proximity to the Great Salt Lake, the largest salt water lake in the Western Hemisphere, and the fourth largest terminal lake in the world. Fun fact about the Great Salt Lake: in an average year the lake covers an area of around 4,400 square kilometers, but the lake’s size fluctuates substantially due to its shallowness. For instance, in 1963 it reached its lowest recorded level at 2,460 square kilometers, but in 1988 the surface area was at the historic high of about 8,500 square kilometers. Crazy, eh?

Salt Lake City is home to the headquarters of The Church of Jesus Christ of Latter-Day Saints (aka Mormons), and about half the population of Salt Lake City proper are members of the LDS Church today. Immigration of international LDS members, mining booms, and the construction of the first transcontinental railroad brought the city its initial economic growth, and the city was nicknamed the Crossroads of the West. It was traversed by the Lincoln Highway, the first transcontinental highway, in 1913, and presently two major cross-country freeways, I-15 and I-80, intersect in the city. Salt Lake City has since developed a strong outdoor recreation tourist industry, and hosted the 2002 Winter Olympics.

We only really had one day to spend in SLC, so we entrusted our experience to our trusty guides Dana and Eli (who was sprung early from school for this mission). We were not disappointed; we were fed like kings and we walked explored a bit of the downtown area.

The Mormon temple is especially impressive. It is a huge building surrounded by beautiful grounds that have been decorated for Christmas. We timed the visit just right, in terms of the lighting and other seasonal decorations.

Whilst exploring the grounds, Dana and Eli were briefly captured by missionaries; Becci and I scattered as we saw them approaching (“save yourselves!”). Eventually Dana and Eli rejoined us (the Mormon evangelist is nothing if not a very polite evangelist), and our visit continued.

The state capital of Utah, in Salt Lake City.

Many of the trees outside the temple were encrusted with Christmas lights.

As the sun was setting on Salt Lake City, we bid adieu to our lovely hosts and headed toward nearby Lehi, a suburb occupied by my niece Elizabeth and her husband Jamie. Elizabeth and Jamie took us to dine at a local burger and beer establishment known as Lucky 13. Lucky 13’s slogan is cheap beer – good whiskey – house-smoked bacon – good burgers. I tested each of these claims, and I feel that this organization is firing on all cylinders. Two enthusiastic thumbs up.

Becci’s Nut-Butter burger. 8 ounces of beef, plus a bunch of peanut butter (smooth).

The following day started early, with Becci vowing never to eat again due to the pain and suffering caused by her dinner from the night before. Who could have suspected that a peanut butter-slathered burger might create gastronomic discomfort? We thanked Elizabeth and Jamie, and we set off westward.

Our first stop…and perhaps our most important stop on the trip so far…occurred at the Bonneville Salt Flats.

Bonneville Speedway is an area of the Bonneville Salt Flats near Wendover, Utah, that is marked out for motor sports. It wouldn’t be good for much else in it’s current state. These salt flats were first used for motor sports in 1912, but did not become truly popular until the 1930s, when Ab Jenkins and Sir Malcolm Campbell competed to set land speed records there.

Historically, the speedway was marked out at the start of each summer. Two tracks were prepared; a 10 mile long straightway for speed trials and an oval or circular track for distance runs, which was typically between 16 and 19 kilometers long, depending on the condition of the salt surface.

The whole plain was covered with this bubbly, salty crust. Yes, I taste-tested it.

After walking around out on the flats and taking some pictures, we decided (I’ll admit that it wasn’t unanimous at first) to take a short drive out onto the salt-encrusted plain. There were a signs warning about what a bad idea it is to drive out there; it is clear that these signs were made for people who don’t have Jeeps. I think that’s a nice gesture, but we do have a Jeep, and so we moved boldly forward. I took Black Betty for a short spin, which she enjoyed immensely.

Bonneville Salt Flats outside of Salt Lake City, Utah. As you can see, the “No Driving Off Road” signs have been ignored by others. Who am I to question those that have come before me?

Black Betty is patiently waiting for me to take her out onto the flats for a spin.

The Bonneville salt flats are a muddy sludge of salt and dirt, covered with a thin crust of salt. At least, this part is. It seems to go on forever. 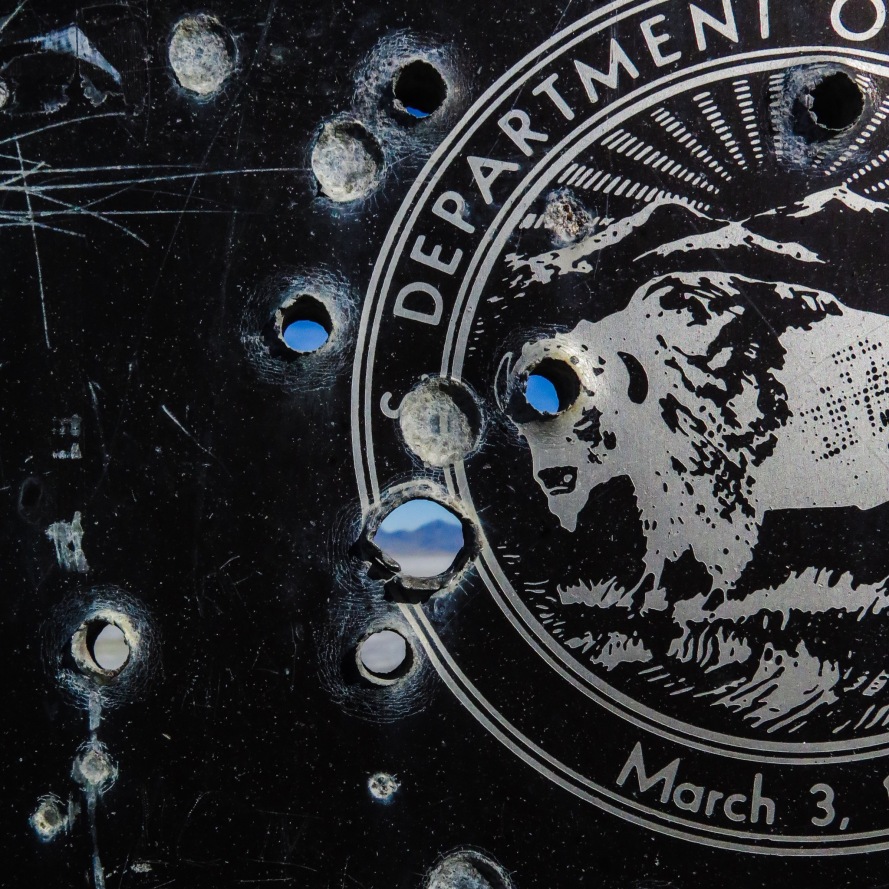 The Bonneville salt flats are pretty far away from it all. The commemorative sign apparently makes a nice target.

Here’s a little video of Black Betty and me enjoying ourselves on the flats.

As fun and as satisfying as that little burst of muddin’ was, we decided to move on. There is more America that needs to be seen, after all. Onward toward California, via the backroads. That meant a drive along Highway 50, the so-called loneliest road in America, toward tiny, secluded Eureka, Nevada.

I view down Highway 50 In Nevada, nicknamed “the loneliest road in America”.

The closeup brings out the loneliness, no? Actually, we have been on lots of lonely roads. We love ’em.

After a few hours of very quiet driving, we did indeed reach desolate, barely-inhabited Eureka. We found a motel, and walked all the way up and down the main street. That look 5 minutes. About half of the businesses that we encountered appeared to be closed, but we did find one awesome general store that had everything: a great selection of groceries including all sorts of meat and produce; a full assortment of liquor; most reasonable types of camping equipment; toys; taxidermied game of all shapes and sizes. They had everything in there. I bought some ice and beer.

We also, amazingly, found a little bar in which to watch the Thursday-night NFL game. You know, I don’t think there has been a competitive match yet in the history of Thursday Night Football. NFL, it might be time to give up on this little Thursday Night project. There is something about Thursday night that makes at least one of the teams, and sometimes both, suck.

We did have a decent time at the Owl Club Bar and Steakhouse however. Surprisingly, the bar was packed. Perhaps the entire population of Eureka was there, as it was pretty much the only place in town serving food. I tried the spaghetti special, which was way better than the game.

One of the twenty buildings in Eureka, Nevada. The majority are vacant.

We didn’t stay for the opera.