Today’s mission began early. We were off on a train journey to Hellfire Pass, site of more war crimes. Ridin’ that train. 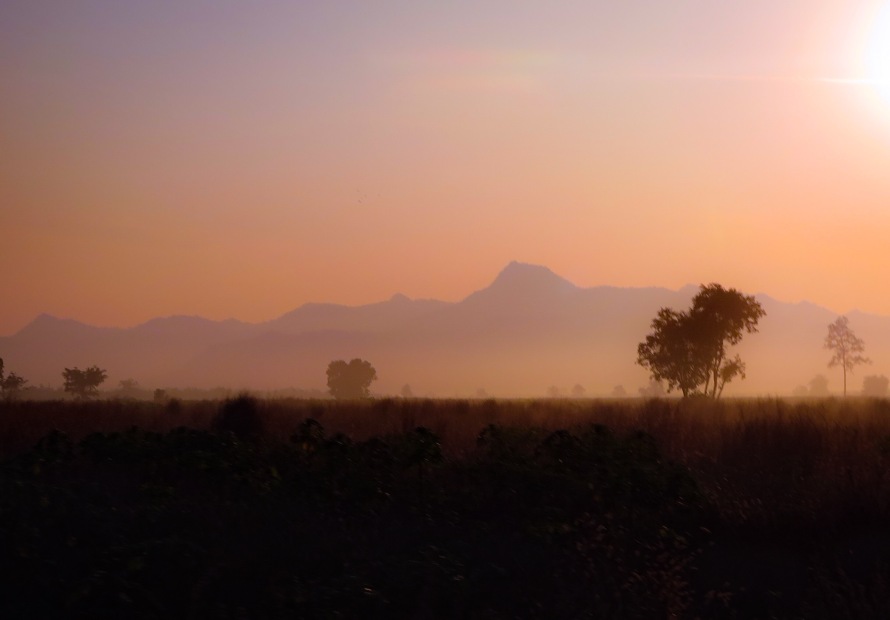 Sunrise, rather than sunset, for once. Today started early.

We had been warned that our jaunt through Southeast Asia would be hot, and the data supports it. 90+ degrees F is the daily high expected in every city we have been in and expect to be in for the next six weeks. For Becci and me, who are essentially Norse when it comes to temperature preference, this was not received as good news during the planning phase of our trip.

Mercifully, it has been unseasonably cool (highs in the 80’s) during our first week in Thailand. This has been and continues to be good news.

However, this morning’s train trip, started at the absurdly early pre-dawn time of approximately 0600, was freezing. The third class trains in Thailand have the windows essentially fused open, which is the correct setting nearly all the time. This morning, however, I froze my ass off. I didn’t expect to be cold here.

Those are rice paddies in the foreground.

Riding the train back from Hellfire pass. This train rides on the same rail installed by POWs and enslaved Asians during World War II. That guy was one of our conductors.

The terrain is beautiful on the train ride between Kanchanaburi and Nam Tok.

The Kwai River along the way to Nam Tok.

Of course, complaining about cold, heat, or hunger is ridiculous once you know the story of the men who cut Hellfire Pass into the mountainside. Those guys…Australian, British, Dutch and American POWs and Asian slave labor…worked 12-15 hour days under devilish, cruel conditions.

As explained in the last post, the Japanese were desirous in 1942 of a land supply route from Bangkok to Burma. This land route was required to supply Japanese ground troops in Burma, as the US Navy had rendered deadly the overseas supply routes in the Pacific.

Reasonable estimates for the construction of this 400+ kilometer railway suggested that it was a six year project. POWs and slave laborers, under severe duress and with literally no machinery, completed the job in 15 months. A good bit of the railroad is still in use today; we rode on it from Kanchanaburi to Nom Tak.

One of the lesser cuts near Hellfire Pass.

The Kanchanaburi area is known for a pair of significant bridges that span the Kwai River. These are marvels of engineering and of the human spirit, especially considering the tools available to the workers. The larger bridge still stands, repaired after some of it was destroyed by Allied bombing in 1945. It remains in use for commuter traffic.

In the area of Nom Tak, the railway is known for a different sort of human accomplishment. In this mountainous area, several cuts had to be made through the rock to allow installation of the railway. This required removing and clearing huge amounts of rock…by hand.

This work was performed by Allied POWs…mostly Australian and British prisoners, as well as large numbers of Asian laborers who were essentially enslaved by the Japanese. The workforce was presided over by Japanese engineers and Korean guards, who often beat or killed the men for insubordination, for failure to work hard enough, or even for being too sick or weak to perform. Sometimes, the workers were beaten for no reason at all.

The work of cutting through the mountain was performed using long steel drill bits. These were driven into the rock with sledge hammers by the workers. Once a depth of 1 meter was reached, explosive charges were placed into the drilled holes, and blasting occurred. The blasted rock was cleared away, and the process repeated. Wash, rinse, repeat, until deep, wide chasms were created as needed for the railway.

Along the way, in addition to the beatings, POWs and laborers could look forward to insufficient, rotten food, as well as tropical disease. Malaria was commonplace. Dysentery was rampant, and cholera outbreaks happened from time to time. I’m not going to describe cholera, but look that up if you want to be horrified by a real-life disease.

The soldiers were fed appallingly little; it is estimated that they received about one-quarter of the caloric intake necessary to sustain the work that they were forced to do. As a result, many men died of starvation or from survivable diseases that easily ravaged their weakened bodies. There are many photographs of these soldiers in the museum at Hellfire Pass; the dead and the survivors alike all look emaciated.

Yet another cut, made by dying men under desperate conditions. 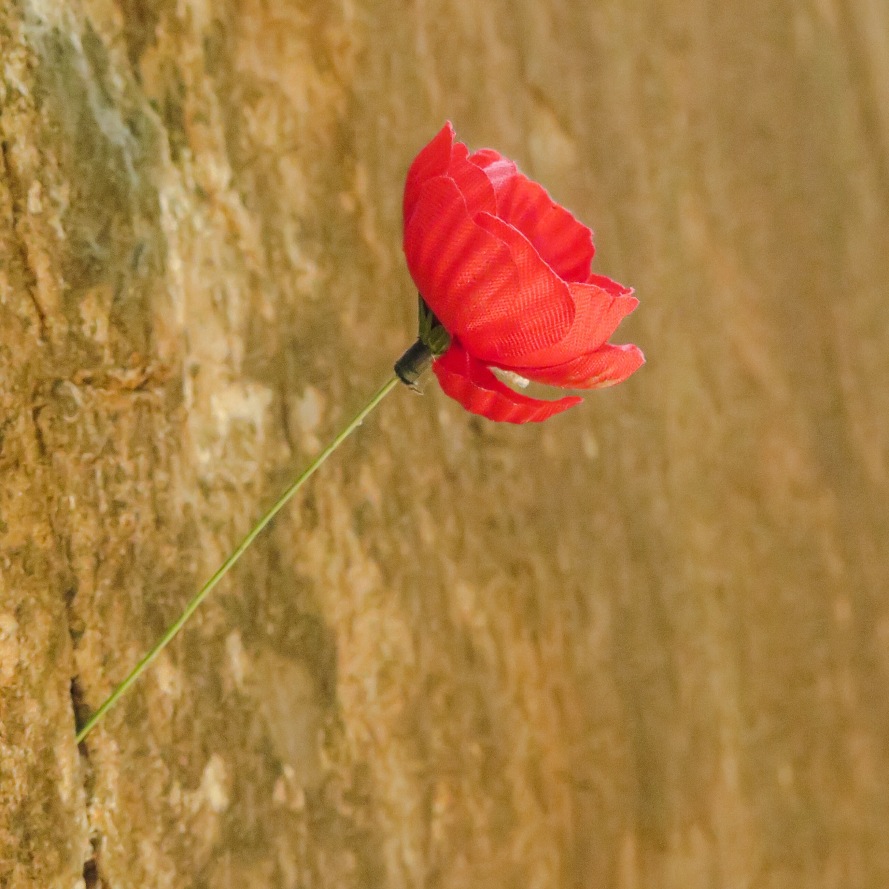 Growing from a stone face exposed by the work of these men. 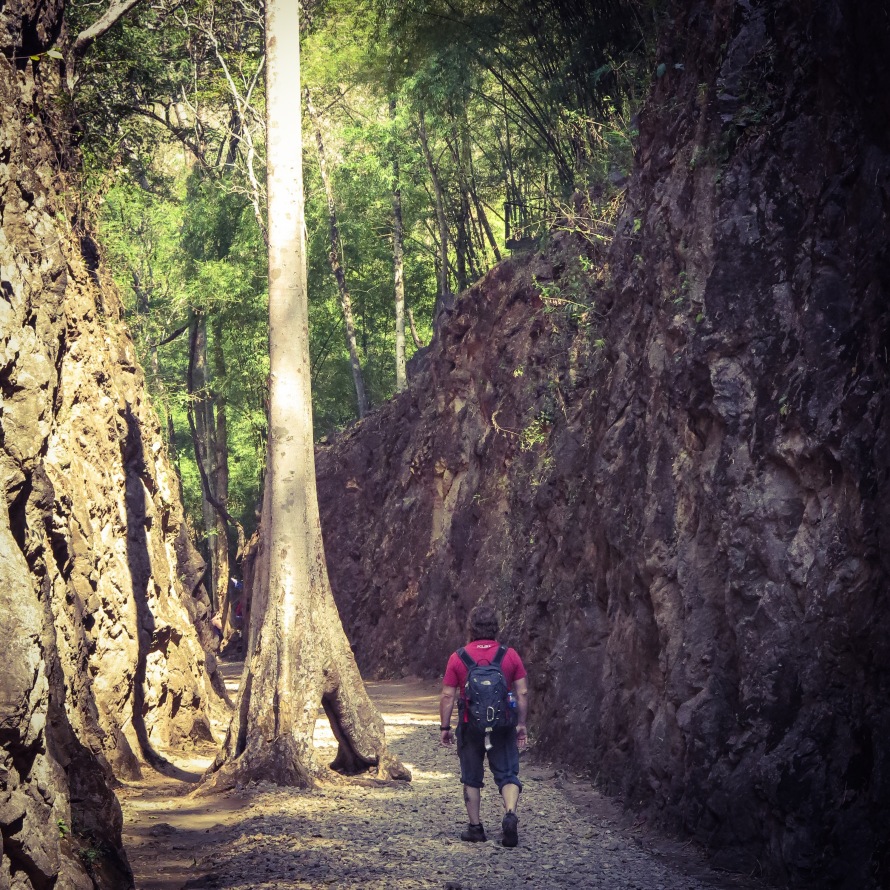 A look at the actual rock cut known to the prisoners who made it as “Hellfire Pass”. This is it. The area where I am walking, and where the tree is growing ahead of me, was once the railway. When the British assumed control of the railway in 1945, they removed 4 kilometers of track starting at Nom Tak, so that the railway to Burma (now Myanmar) could not be used for undesirable purposes.

Like a lot of the war and war crimes memorials that we have visited, I would say that this one was not a lot of fun, per se, but is well made and is offered in a spirit of commemoration and remembrance. There is a fantastic audio guide available for visitors, and it features narration and anecdotes from several POW survivors who recount their firsthand experiences working on the railway and in Hellfire Pass. In the end, this memorial like so many others is a reminder of how dangerous and how ravenous that state-sponsored oppression can be, and is at the same time a tribute to the power of individuals to survive and overcome this type of oppression. 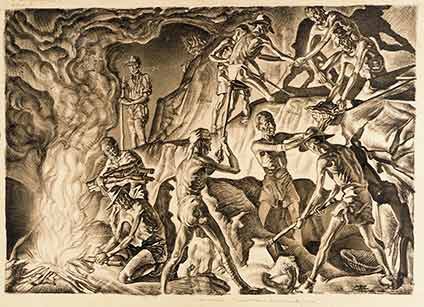 Despite the grimness of their daily lives, some of the British soldiers noticed and wrote about what we also noted during our long walk along the former railway (this section is now a jungle path). This place…a hell for many men during those long 15 months during the war…is a beautiful paradise, mixing lush jungle with low, rocky mountains. The mountain trails offer lovely views down into a seemingly never-ending rainforest.

Droopy-skinned Asian cows, which we encountered on the grounds of the Hellfire Pass Museum. This calf was trying to nurse, but mom was too nervous to play along while we were there. 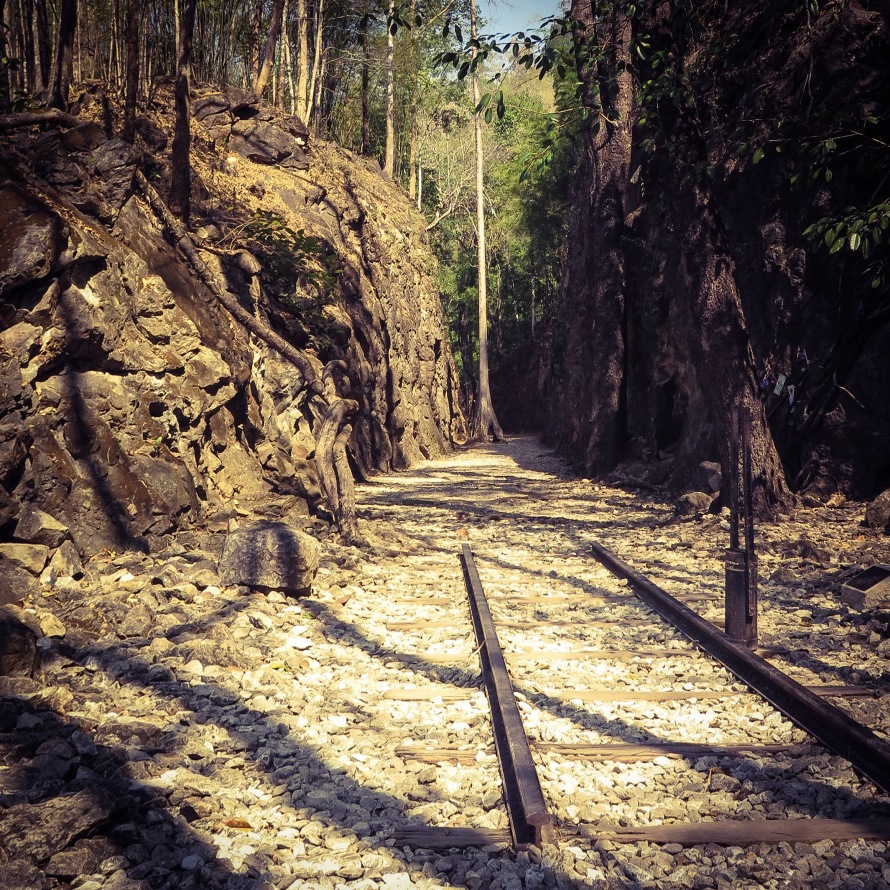 The entrance to Hellfire Pass. This small, symbolic segment of track was re-laid by Australian soldiers in remembrance of the brave Australians…and others…who suffered and died as enslaved POW’s here. 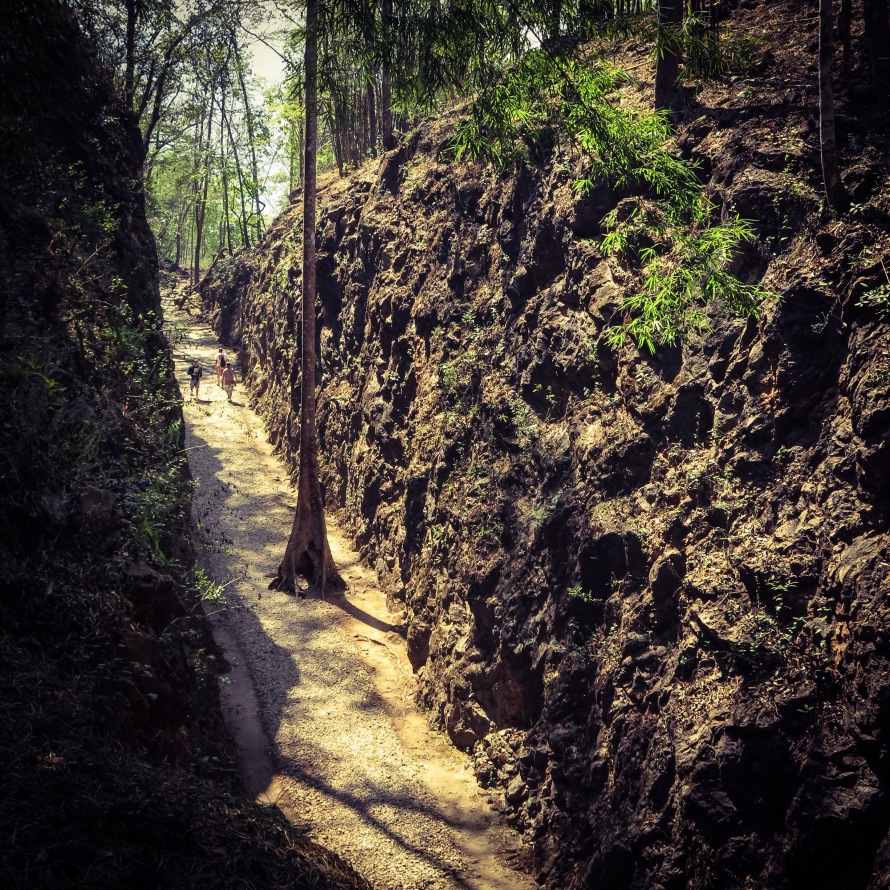 Another great shot of Hellfire Pass. This area was carved out of the rock by men working day and night with hand tools.

We (Becci, actually) have gotten pretty good at navigating the public transit systems of the countries we are visiting, and we ignored the advice of mendacious taxi drivers who claimed that no bus ran from the town of Nom Tak to the Hellfire Pass museum. We caught the bus back to town and grabbed a quick bite at a restaurant near the train station. We arrived just in time to catch our train back to Kanchanaburi…and unlike our ride in the morning, this time it was crowded and hot.

As we rode along the railway, I thought again of the many people who worked, suffered, and died to create this route. Their sacrifice continues to benefit others, somewhat prosaically, as hundreds or perhaps thousands of people ride the train along this route every day. Some on the train were tourists, but most were local people. Many school-age children, dressed identically in uniforms, were riding the train home from school during our afternoon ride.

After three hot ‘n’ sweaty hours, we once again reached the bridge over the River Kwai. Still standing, still in use every day. 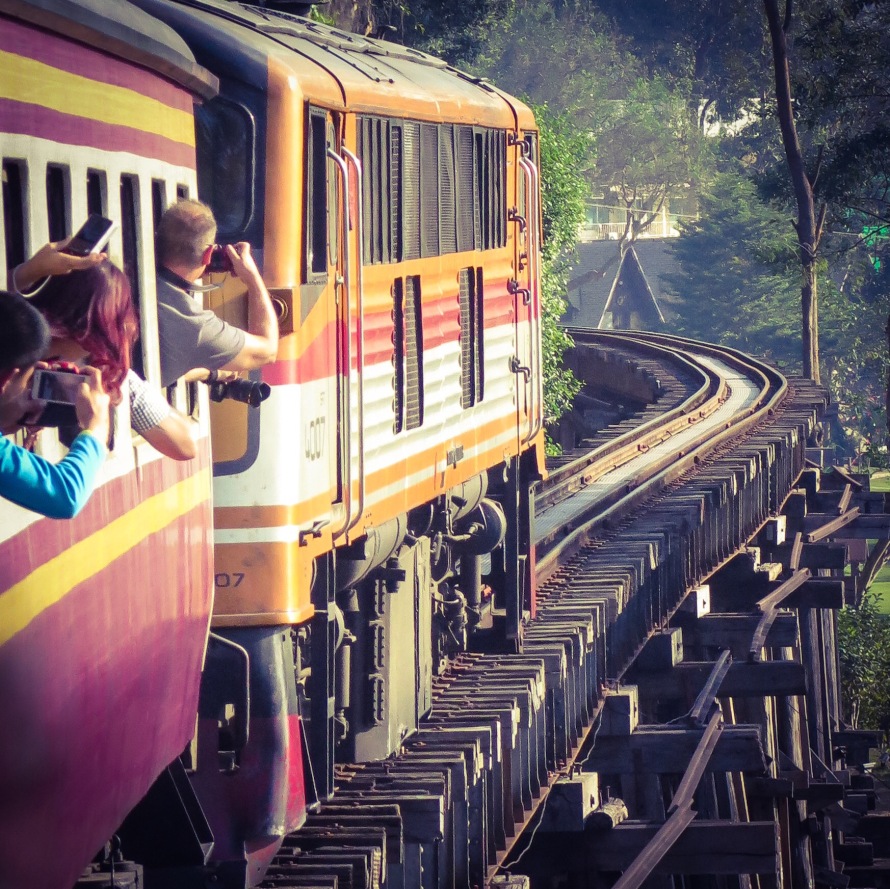 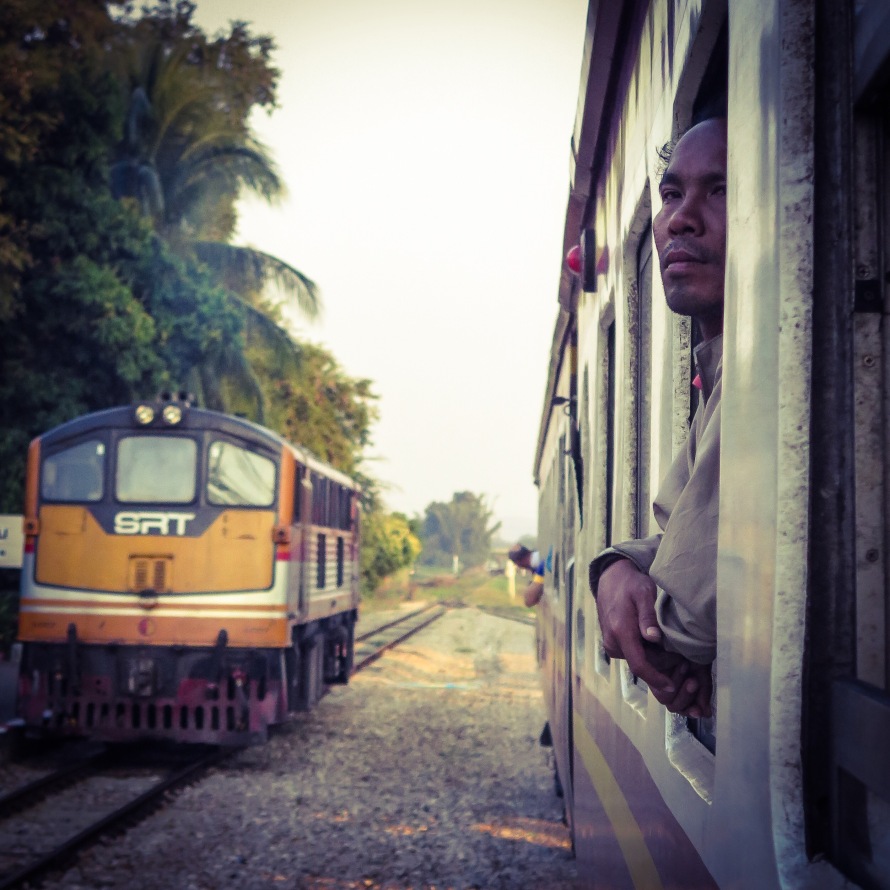 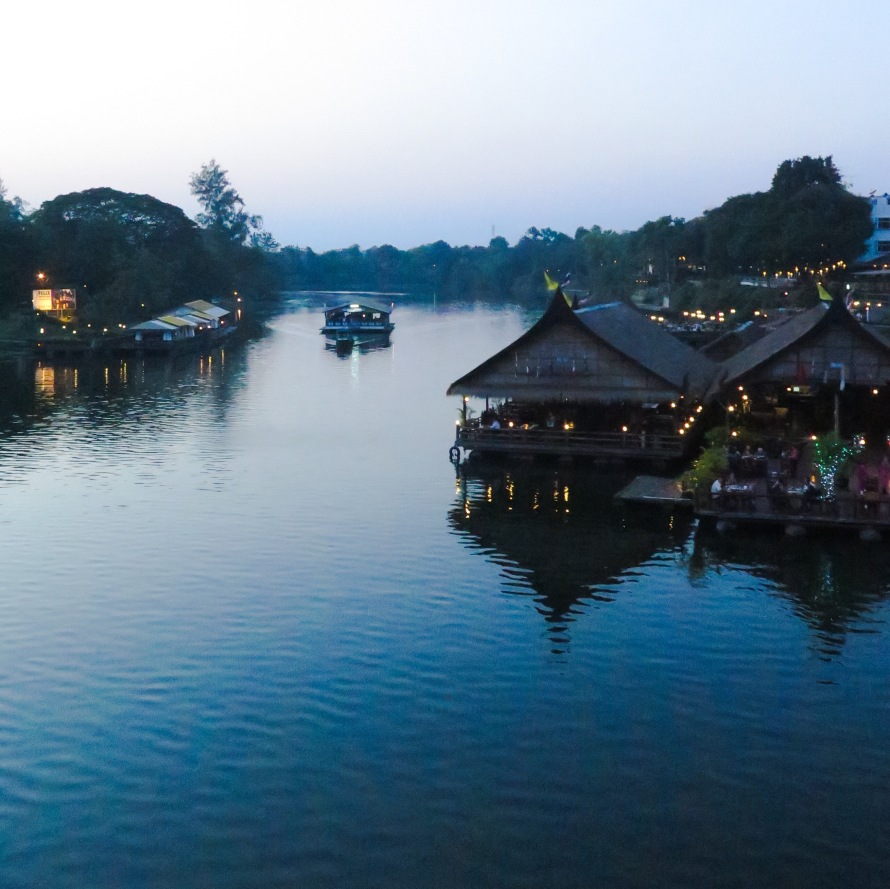 A view of the River Kwai from the train. Peaceful and beautiful and sublime.

It was another great day in Thailand. I think this may be my favorite country visited yet.

We will end this post with a short poem that we heard in the Hellfire Pass audio guide. It’s a little corny sitting on the page, but it’s awesome and powerful when delivered in a thick Aussie accent. Use your imaginations. Or find an Australian to read it to you.

I’ve travelled down some lonely roads,
Both crooked tracks and straight.
An’ I’ve learned life’s noblest creed,
Summed up in one word … “Mate”.

I’m thinking back across the years,
(a thing I do of late),
An’ this word sticks between me ears:
You’ve got to have a “Mate”.

Someone who’ll take you as you are,
Regardless of your state,
An’ stand as firm as Ayres Rock
Because ‘e is your mate.

Me mind goes back to ’42,
To slavery and ‘ate,
When Man’s one chance to stay alive
Depended on ‘is Mate.

You’d slip and slither through the mud
And curse your rotten fate,
But then you’d ‘ear a quiet word:
“Don’t drop your bundle Mate.”

And though it’s all so long ago,
This truth I ‘ave to state:
A man don’t know what lonely means
Til ‘e has lost his “Mate”.

If there’s a life that follers this,
If there’s a ‘golden-gate’;
The welcome I just want to ‘ear
Is just, “Good on y’ Mate.”

An’ when I’ve left the driver’s seat,
An’ handed in me plates,
I’ll tell ol’ Peter at the door,
“I’ve come to join me Mates.”