Since we’ve been in Thailand, we have been slurping down an abundance of delicious food, almost every mouthful has been eye-rollingly good…so we decided to learn how to make some of our favorite dishes ourselves.

Of the multitude of cooking courses available to book in Chiang Mai, we were recommended by our hostel to sign up for Sammy’s Organic Thai Cooking School, a day long class held on Sammy’s farm about 30 minutes away from Chiang Mai city.

Sammy studied to be a chef in London, therefore his English is very good. He was able to translate all the ingredients into many different languages for our international group. He also cracks himself up about 5 times a minute, which is very endearing.

We were picked up from our hostel at 8:30am and climbed in the back of a pickup truck with a couple from Melbourne. We teared down the highway headed out of town, shivering at the cool temperatures (only the second time so far). Our first stop for the day was a local market, where we met Sammy (and was reunited with our friend Darrell from the Elephant Park) and learned about the different types of rice. There are over 100 different types of rice used in Thailand, but we were only going to be working with steamed rice (jasmine) and sticky rice. 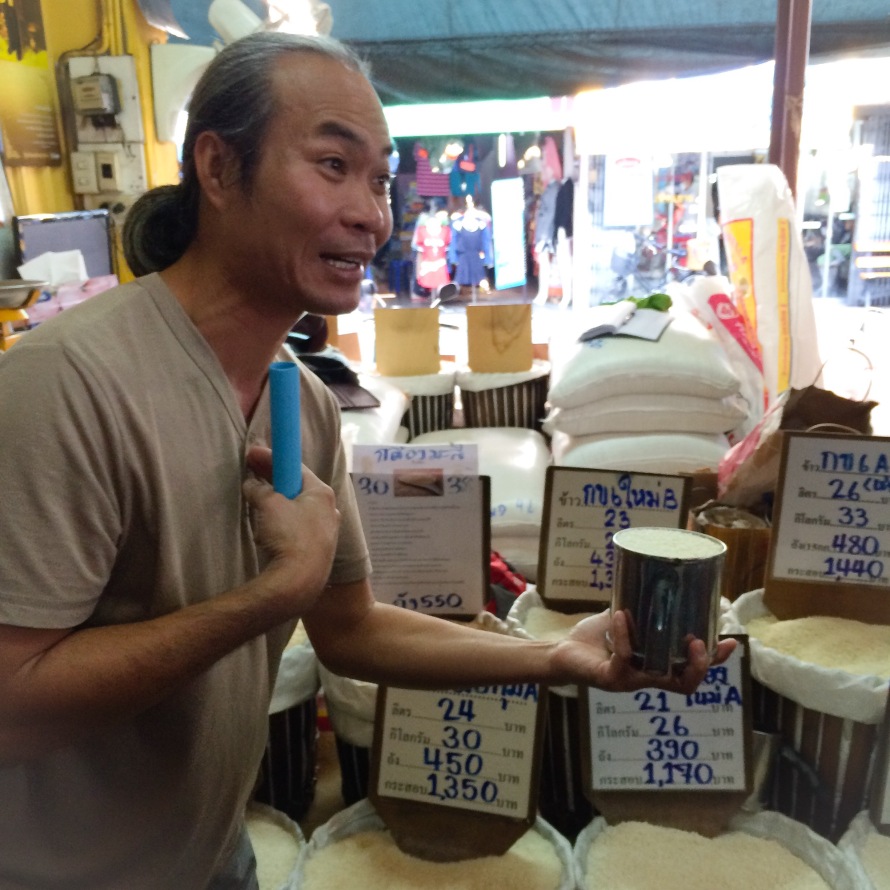 We were advised by Sammy not to touch our hair after handling the sticky rice, but we should feel free to touch the hair of our neighbor.

The only ingredient that Sammy does not provide directly from his farm is coconut milk, which we were picking up at the market. We were given a short demonstration of the milking process; the coconut flakes are run through a machine that squeezes out an incredible amount of milk. After this process, the coconut shavings no longer have any flavor and are often used to feed chickens. Sammy uses the leftovers for compost at his farm.

After this short demonstration, we were given free range at the market. It seems that there is a market like this every five blocks or so…it’s amazing how much beautiful fresh produce there is compared to Nashville’s one and only Farmer’s Market and a couple of speciality stores. 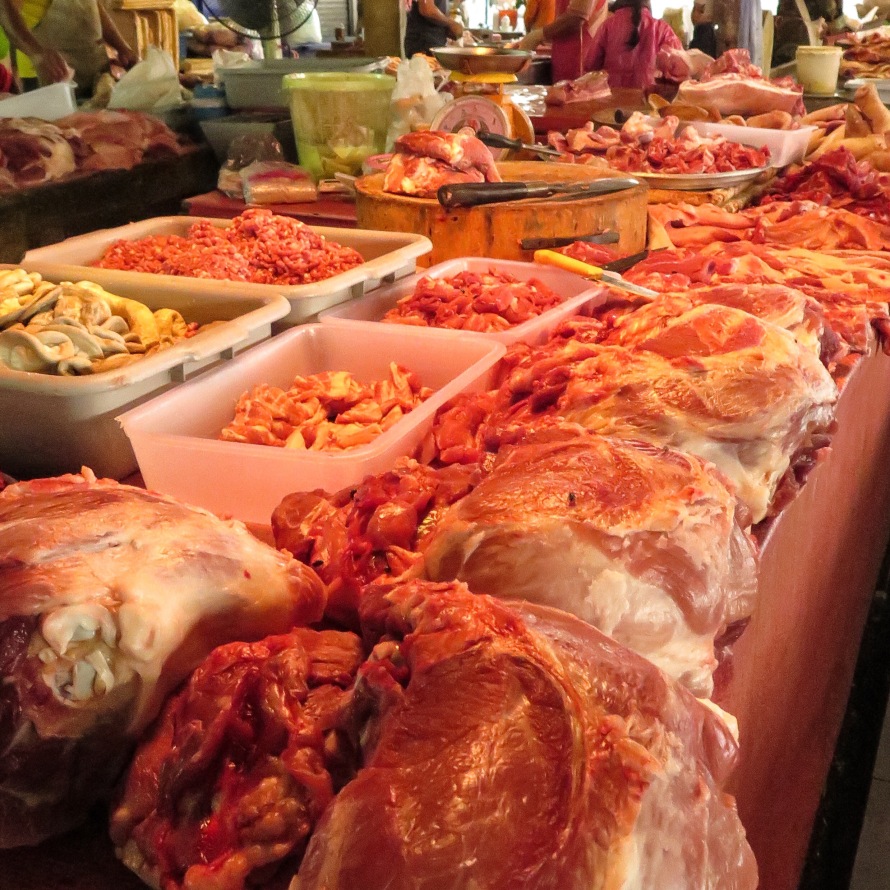 Don’t piss off the lady with the big knife.

Some delicious fried chicken bubbling away.

Once at the farm, we got to pick 5 dishes, from appetizers to dessert, from an extensive collection.

Before we made the curry, we had to make the paste, which involves a lot of smushing ingredients up with a mortar and pestle. Not surprisingly, John opted for the hottest curry (Jungle Red). 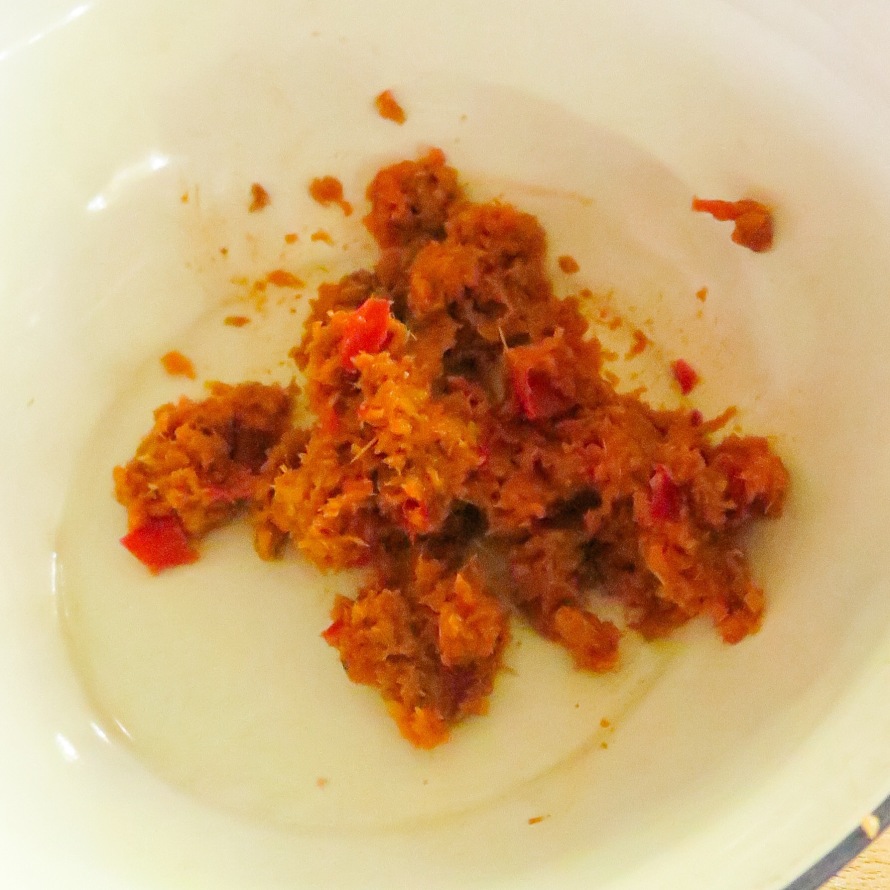 Here he is, mincing onion for his paste. Doesn’t he look cute in his apron?

Once we finished making our paste, it was time to move the cooking area. 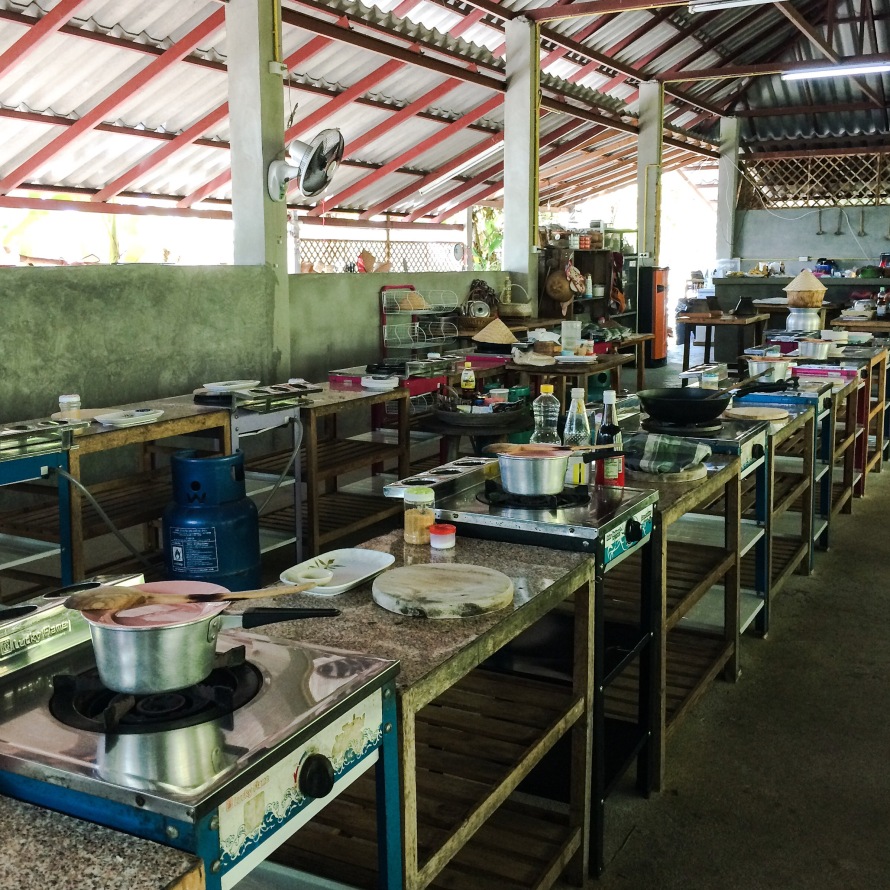 Everyone had their own single burner and a big countertop to mix and chop the additional ingredients. We were literally handed out ingredients on a plate, which we minced, chopped and shredded while Sammy’s wife looked on and gave us pointers. Here’s the base of my curry simmering on the stove…I was already hungry. 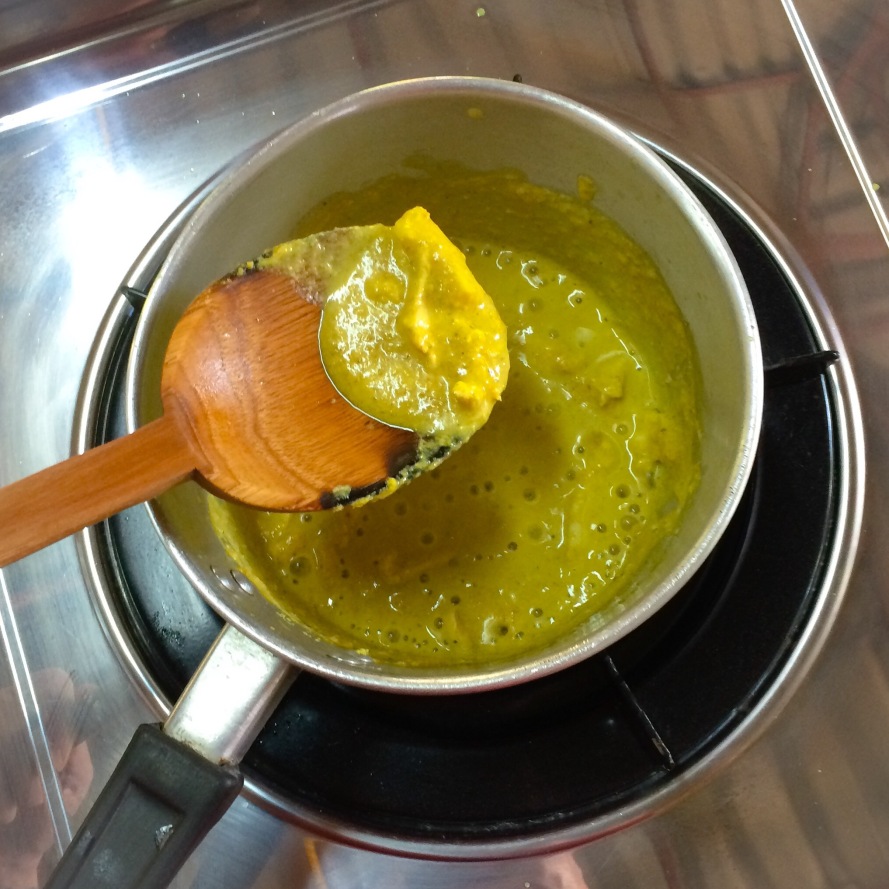 Here’s John nursing his Jungle Curry. Just after I took this picture, he tasted it. “It’s very hot” was the verdict.

Alas, we had two more dishes to cook before we were allowed to sit down and snorf it all up. Next up was the soup course: Chicken in Coconut Milk Soup.

The broth of the soup is made of coconut milk and coconut cream, therefore it was quite sweet. Very delicious. We did learn a vital piece of information about Thai soups…you are not supposed to eat everything in the bowl. 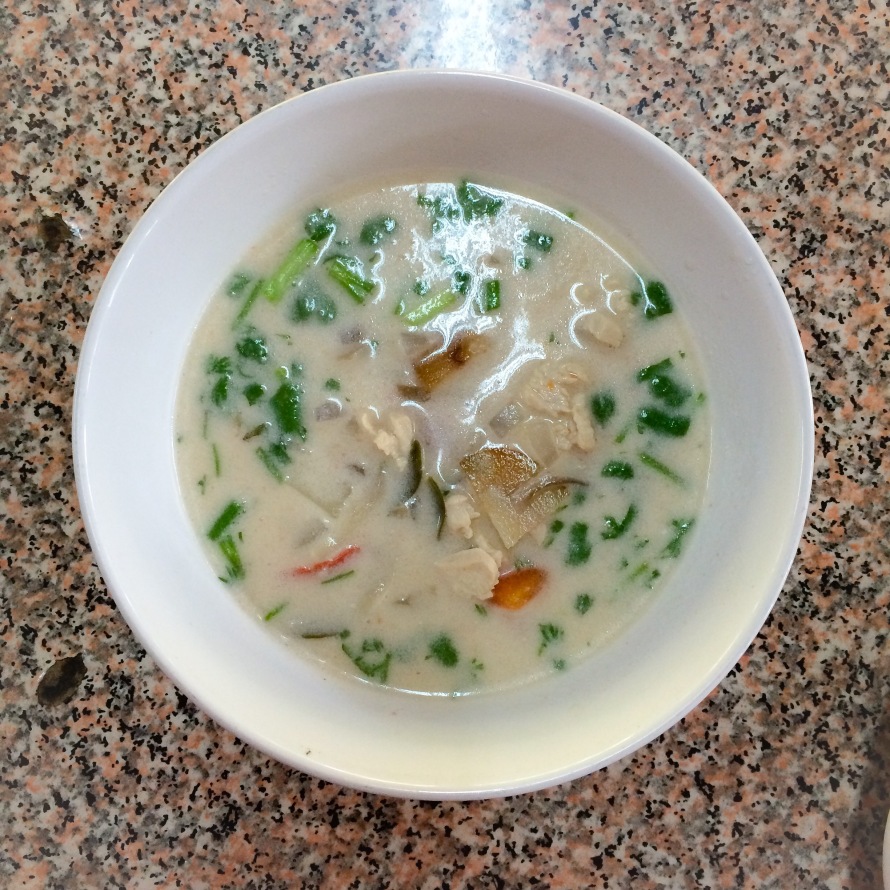 Lemongrass and ginger chunks give great flavors, but they are hard to get down and are essentially flavorless once the soup has been fully cooked. This explains the mystery chunks I have been patiently chewing through over the last couple of days.

The stir fried dishes were up next, and we had both chosen our favorites to cook up. Phad Thai for me, chicken and cashew nuts for John. My Phad Thai took approximately 1 minute to cook… I think it took longer for the oil to heat up than the entire dish took to prepare.

It was finally ready to eat our first three dishes. We had a really chatty bunch, but no one spoke during the meal…that’s a good sign. After we ate, we were shown Sammy’s pride and joy: his open air toilets.

We were given an hour to lie around like beached whales, either on bamboo platforms or hammocks overlooking Sammy’s beautiful farm. 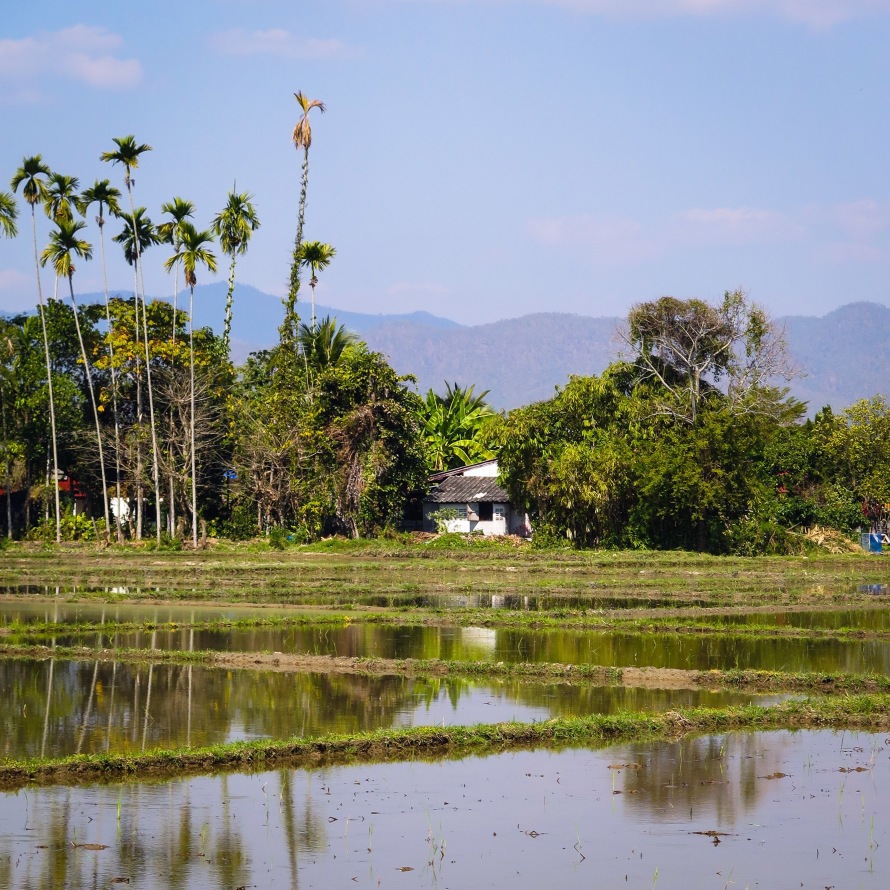 Given the current state of my swelling, I avoided the hammocks, fearing that I would not be able to get out again.

After our naps, we were all a bit delirious, which Sammy and his wife seemed to be fully prepared for. They took a lot of the work out of our hands and handed us piles of spring roll fillings, only showing us how to roll them up before Sammy took them off our hands and deep fried them. 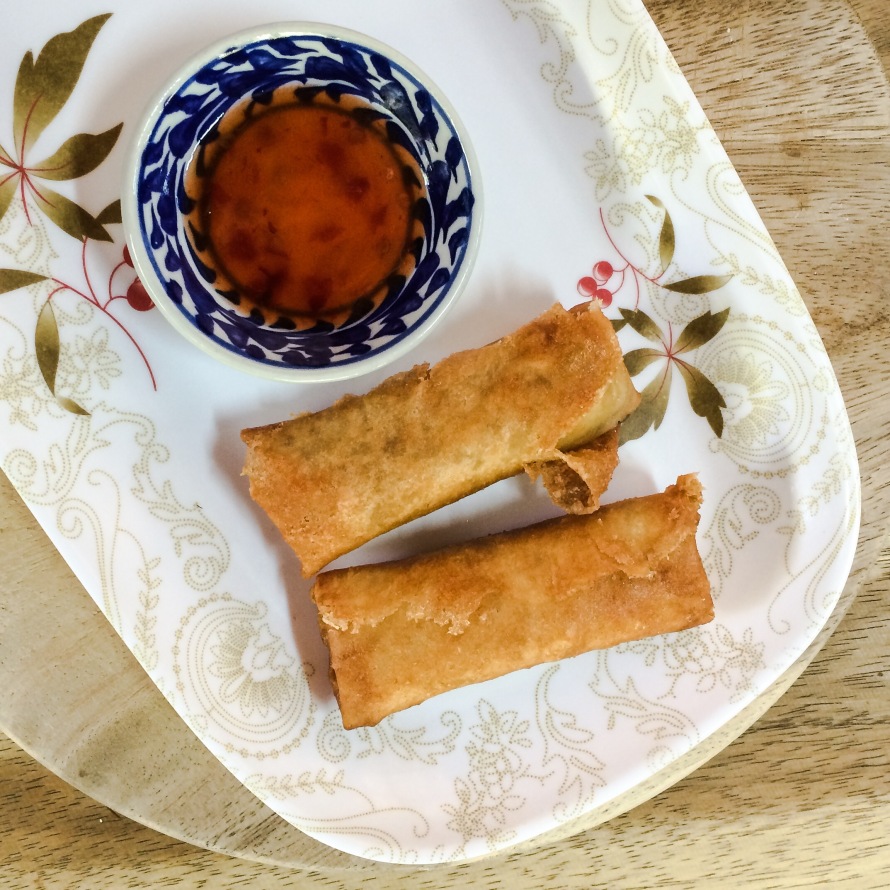 Also an option for the appetizers was Gai Hor Bai Toey, or chicken wrapped in pandanus leaves. Only two people opted for this course as we all wanted to eat spring rolls, but Sammy made us all join in and learn how to make these anyway. A tiny spoonful of chicken, sesame seeds, pepper and flour is nestled into a pouch of pandanus leaf, that you make by folding the leaf in on itself. Then, you keep wrapping the leaf around the pouch until you get a tidy little triangle, which you fasten together by pulling the tip of the leaf through a small hole. 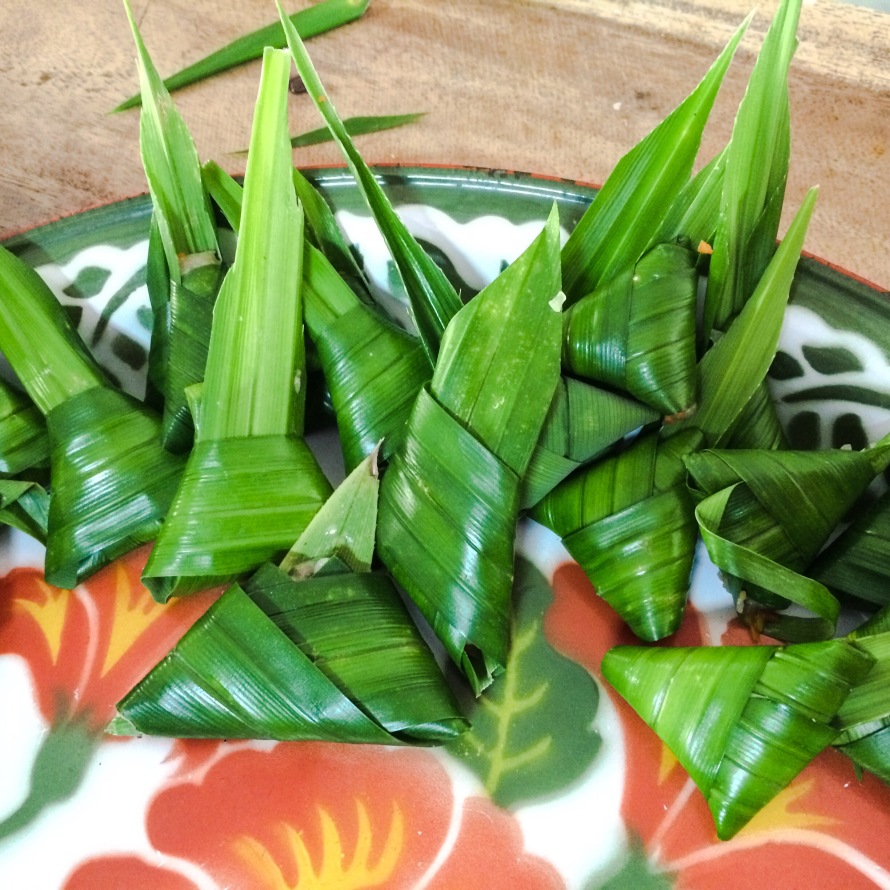 While fun to make, it’s a bit of effort to unwrap them again, just for a tiny morsel of chicken.

Dessert was up next, and my mango with sticky rice was very simple to make (once the rice is cooked, which is a day long process). Some sticky rice, some coconut cream and a heap of brown sugar flattened into a bowl, which is then turned upside down on a plate and decorated with mango slices. Delicious! 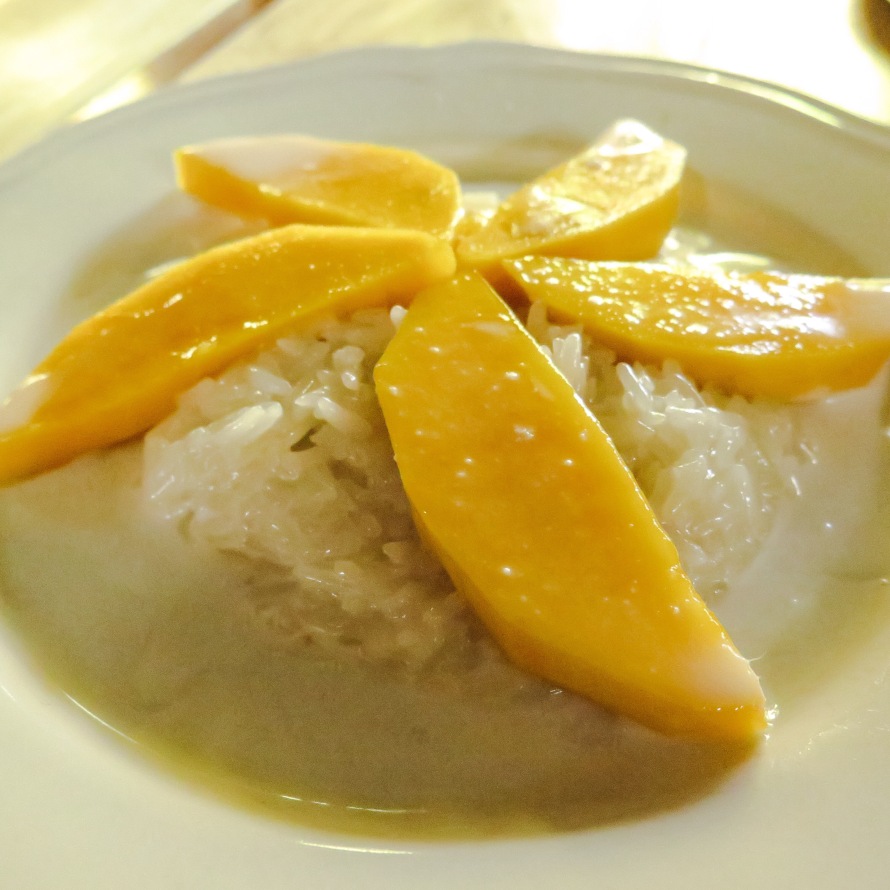 At the end of the day we were given a detailed cookbook to take back with us. I can’t say we came out of the class as Thai culinary wizards, but I was surprised at how easy it was to make meals with such complex flavors. We’ll do our best to replicate it at home for any brave friends that want to humor us!

Our trip back to the hostel in the pick up truck was definitely warmer than it had been 8 hours prior. The hot sunshine and all the eating had put me in a food coma, and I collapsed into bed for a two hour nap that night. That’s how you know you’ve had a good day! After our second siesta for the day, we headed out on the town for some beers with our new friends Darrell, Nathan and Trina. All of us had been traveling long term, so we had plenty of embarrassing, scary and generally amusing road stories to share. Team Burning Man did a remarkable job in convincing us to attend this year…I’m sure that adventure will be a blog post and a half!

Tomorrow we leave Chiang Mai and take a sleeper train back to Bangkok, and from there a short plane trip to Hanoi, Vietnam. So long, Thailand…you’ve been absolutely superb and I can’t wait to see you again!