Aliens and Monster Wyrms – A Tale of Two Fosses

With the sudden realization that we had just passed the halfway mark on our trip, we needed to hoof it down the road a little faster to keep on schedule.  It was lovely staying three full days in one area, but it was time to move on to Eastern Iceland.  On the way to Egilsstaðir, our base in the East Fjords, we visited Europe’s most powerful waterfall: Dettifoss.

There are two viewpoints at the falls; one you can reach via a nice new paved road on the western side and the other on the east, via a long and bumpy potholed gravel track.  True story: we were rocking out to Bohemian Rhapsody (Wayne’s World style) and missed the first road.  We only figured that out when we crossed this bridge, which is quite a production for Iceland.

Icelandic bridges are almost always a one lane affair, with a low guardrail (if any) and a concrete, wood or galvanized steel surface.  This was the fanciest bridge we had come across and I was surprised that it wasn’t on my enormous map, which lists almost everything you can see.  Upon examination, I found the bridge, and realized we awere about 30km past the first turn.

This is how we found ourselves being rattled to insanity for 45 minutes on the bumpy track.  The condition of the road was the worst we have experienced so far, but when we finally saw the falls – all was forgiven.

Dettifoss is 100 metres (330 ft) wide and a drop of 45 metres (150 ft) down to the Jökulsárgljúfur canyon. It is the largest waterfall in all of Europe in terms of volume discharge, having an average water flow of 193 m/s.  That’s approximately the contents of one olympic-sized swimming pool every 12 seconds. It’s intimidating, folks. 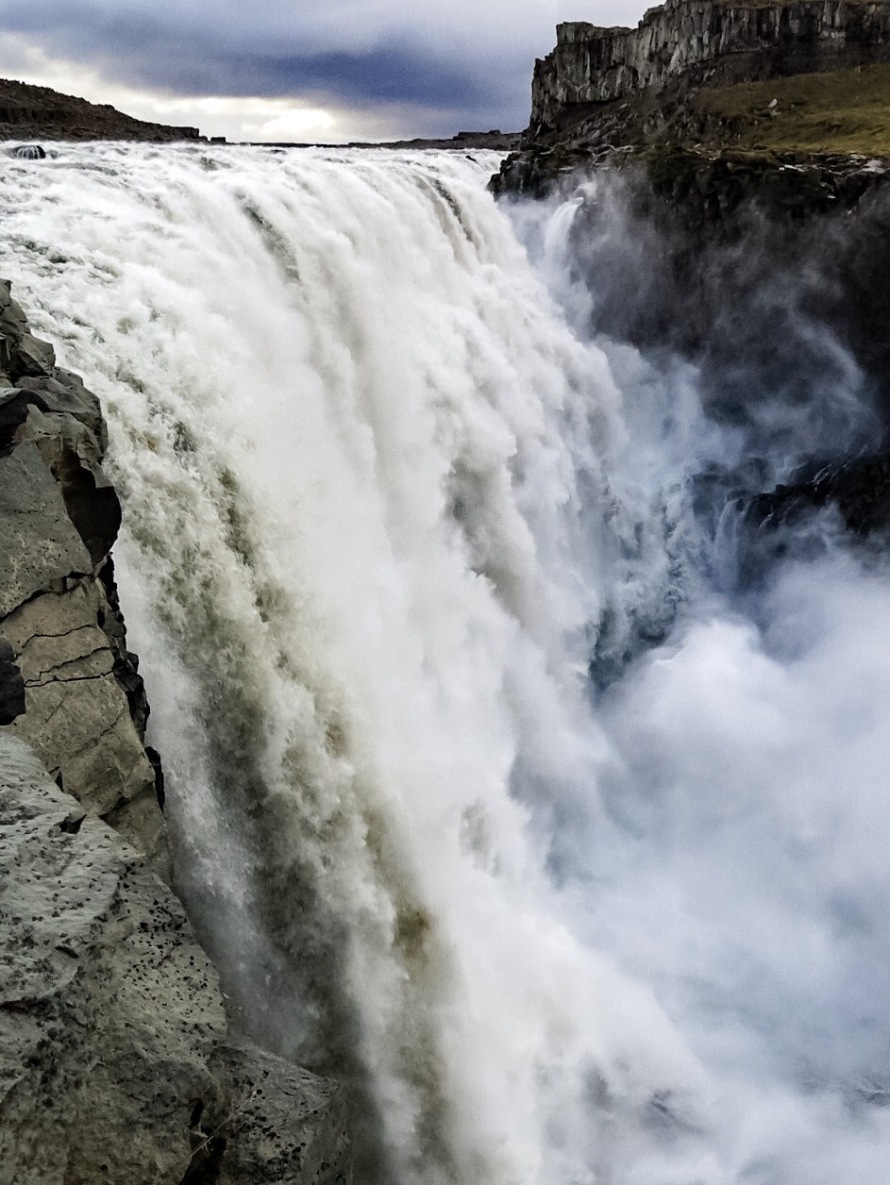 I took this picture while lying down on the edge of the cliff, hanging on with every muscle in my body.  It’s important to note, there is nary a guard rail, a warning sign, or a roped off area in sight.  In fact, boot prints prove that people have gone as far as they can possibly go without actually diving off the edge.  I was a little more timid…at first.

If this monster looks familiar, it could be because you saw the film Prometheus. 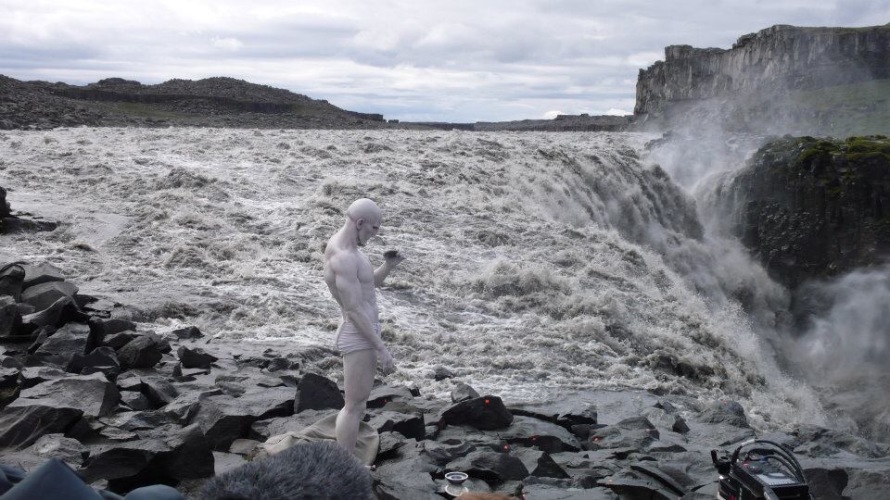 We didn’t re-enact this scene, but we stood exactly where this freezing cold actor stood…just because you can.  Let me make note of this insane fact again…you can stand as close as you want to this incredibly dangerous thing and nobody cares.  Everyone just assumes you wont play silly buggers and fall in.  I find that mind-blowing.

I am a very risk-adverse person.  I am on safety patrol at all times…but I couldn’t resist creeping to the edge. I inadvertently snapped this picture, as I was peering over the falls. I only realized later, when reviewing the photos from the day, how close I actually was. Looking at it now, it makes my knees tingle.

We stared into it’s depth for about an hour – you just can’t tear your eyes away from it.  Eventually, it started to rain and our sandwiches were calling us from the car park.  We said goodbye to Dettifoss several times, as we kept having to sit and stare at it some more on the way back to Jimny. 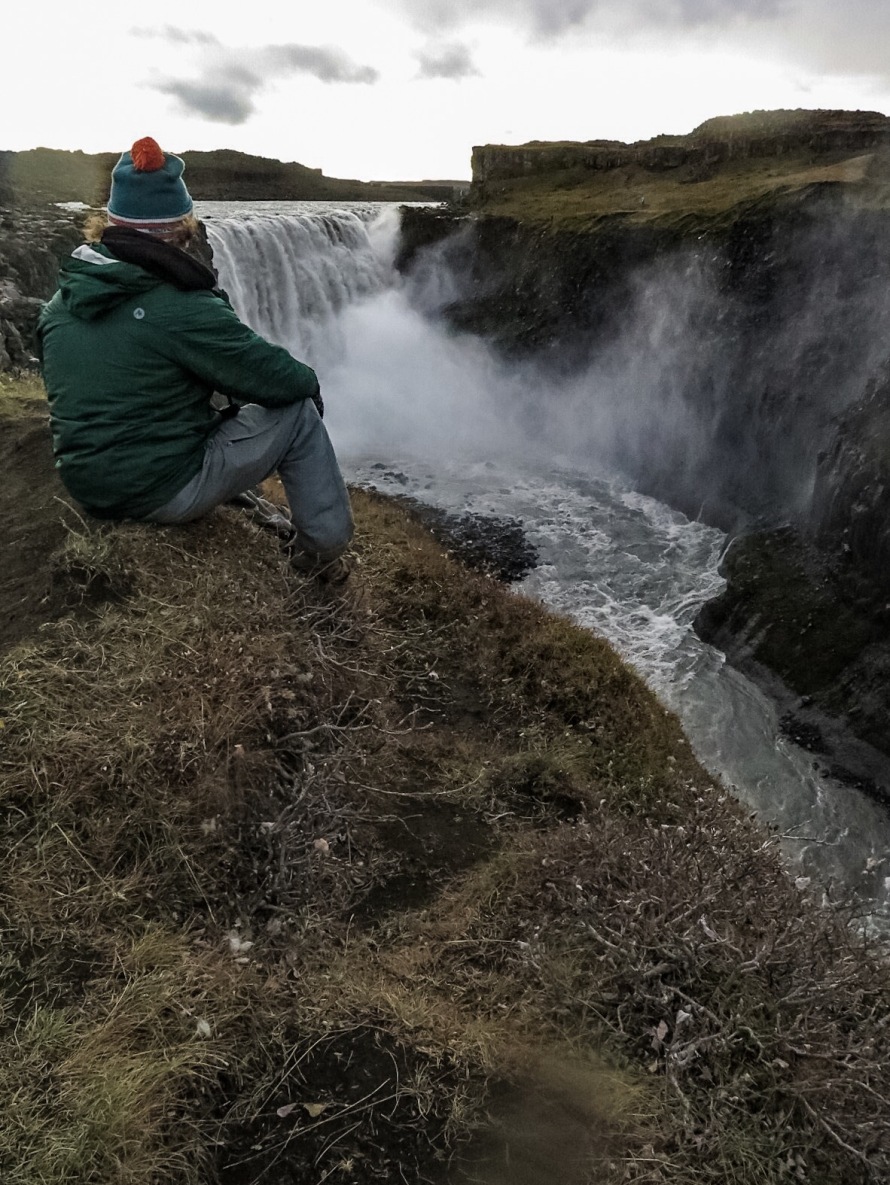 We were so distracted by the falls on the way down, we completely ignored the enormous canyon that Dettifoss empties into.  Jökulsárgljúfur canyon was created when a volcano erupted underneath the river eight thousand years ago. The name of the canyon literally means “glacial river canyon”. Jökulsargljúfur is 25km long and 120 meters deep.

Our two hour detour was completely worth it.  If you are ever in Iceland, get thee to Dettifoss if possible!

We stayed the night in Egilsstaðir, in Eastern Iceland.  Egilsstaðir sits at one end of Iceland’s third largest lake: Lagarfljót.  The lake is home to a mysterious creature, The Lagarfljótsormur. 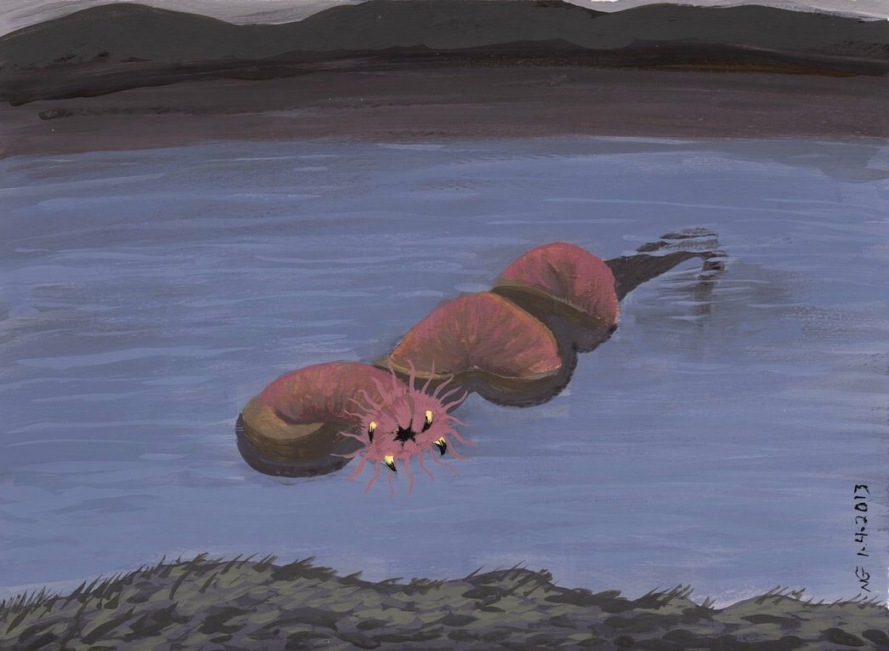 Artist’s interpretation. I did not take this photo.

The Lagarfljót worm, or as it’s known outside of Iceland as the “Iceland Worm Monster”, is purported to live in the lake.

Sightings have been logged since 1345 and continue into the 21st century, including a 2012 video supposedly showing the creature swimming.

If you are a cynic- this is obviously a net or something caught in the water.  If you are a believer, it’s the ultimate middle finger to the boring old bores. We watched very carefully as we drove along the edge of the lake.  We did not have a wyrm sighting, but he was probably just having a rest.

Our destination for the morning was at the other end of the lake: Hengifoss.  Hengifoss is the third highest waterfall in Iceland, at 128 meters.  We had our American brains engaged this morning, so we were just assuming there would be a road to the falls and a nice lookout platform from which to view them.  We hadn’t finished our second cup of coffee yet, and had our longest day of driving ahead of us.  Our American brains were so wrong.

It’s an hour long walk, uphill at a 15-25% grade, for 2.5 km to get anywhere near the base of this thing.  Settled into my car nest first thing in the morning, I did not do a very good job adjusting to this new reality.  I believe I have mentioned that I do not like the ‘up’ so much.  Well, this was the most ‘up’ so far.  There are a couple of things that make going up worse than the obvious reasons.  1) You are not dressed appropriately.  I had on my silk long johns on under my jeans and three layers, plus a hat and scarf.  I was shedding layers at a lewd rate. 2) Parts of the hill hide behind other parts of the hill, creating an optical illusion that your torture may be over soon.  Until, that is, you round the bend and then there is just more effing hill as far as you can see. 3) People telling you “you don’t have to do this, you know” and finally 4) Lithe Europeans scampering up the bloody thing like Bambi.

It was a hot, sweaty, breathless, blood-pounding-in-your-ears ascent.  I also wasn’t giving up my to-go coffee (this stuff is expensive) so I dragged that up there as well as the rest of me.

I enjoyed the walk back down.

Having unexpectedly killed two hours we didn’t have in our schedule, we hurried back on the road and John drove until the sun went down.  We passed a plethora of unique landscapes along the way…but sadly, we did not have time to explore them all.  You will have to settle for pictures from the 260km of road we travelled, taken out the car window, as all my muscles had seized up upon finishing our hike.  I promise I will do better tomorrow. 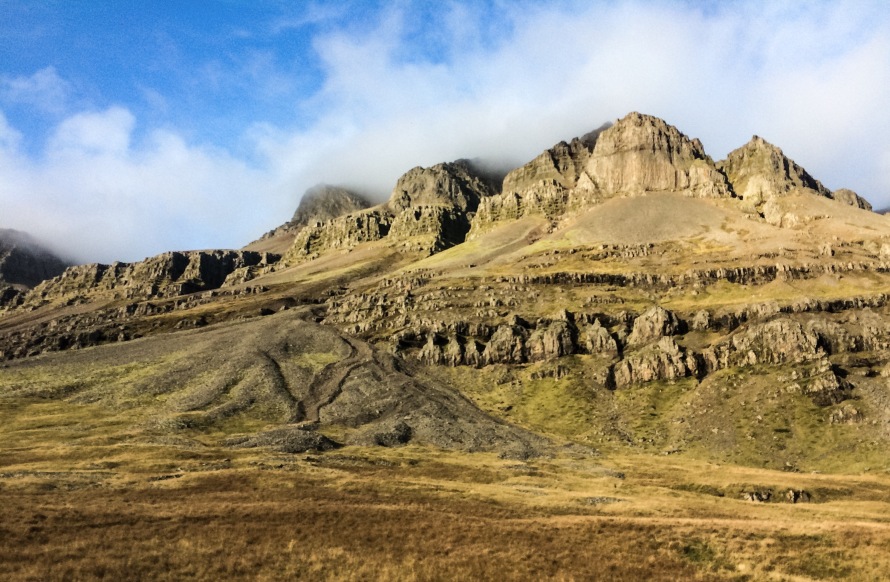