Getting to Australia was harder than we thought. We had long ago decided to fly to Australia from Bangkok…the city has a bigger airport than anything in Cambodia, and Bangkok is an easy place to get to from Cambodia, right? Sitting in Siep Reap, and having become accustomed to […]

Angkor Wat – We Came, We Saw, We Got Sunburned and Hopelessly Lost

When we drew up this crazy plan over a year ago, Cambodia got on the list with a bullet…that bullet being the Angkor Archeological Park. It’s the largest religious compound on the planet, and the many temples surrounding Siem Reap kept us very busy for a couple of […]

Following our adventures in Vietnam, we cashed in a few frequent flier miles and treated ourselves to a flight to Cambodia.

As you saw in our last, most efficient post ever (less than a hundred words; I think this one will make up for it), we spent a few days at the beach. 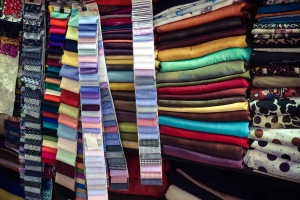 Hôi An – You Buy Something!

We headed to Hội An from Huế in a private car, with our new friends from Colorado, Tim and Julia. Having our own driver afforded us the opportunity to make some scenic stops along the way that aren’t possible with the train (which only goes as far as […]

We spent two days touring around Huế, the first day dedicated to exploring the central ancient Citadel and Imperial Enclosure and the second day we spent among the Royal Tombs of the Nguyen dynasty. Huế is a city with a noble past, but also with a recent tragedy. 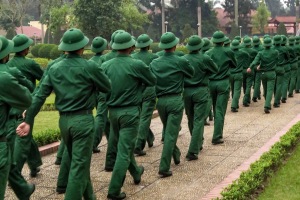 Hanoi to Hué – Ho Chi Minh and the Super Bowl

I looked it up. There has not yet been a single written article to focus its attention on both Ho Chi Minh, (locally) beloved, controversial uniter of the nation of Vietnam, and the Super Bowl, intergalactic championship game of American Football. Until right now. 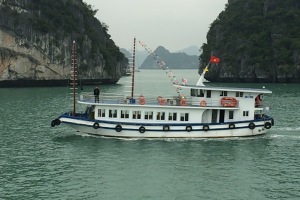 Cruising Halong Bay – Where the Dragon Descends Into the Sea

Having spent three days dodging armies of moped and taxis, we decided it was time to head out of the city and visit one of Vietnam’s most iconic sights: Halong Bay.

We decided to get up early for a change, and we made our way over to the Hoàn Kiếm Lake in downtown Hanoi. Besides being a nice walk, we had heard that it is the site of a great deal of early-morning Tai Chi, and we wanted to […]

Hello friends, and welcome to the highlands of Chiang Mai. We arrived here via our longest Thai rail journey yet, which we elected to experience in second class (air conditioned) comfort. We alternately watched the farms and the mountains of the Thai countryside roll by, and viewed the […] 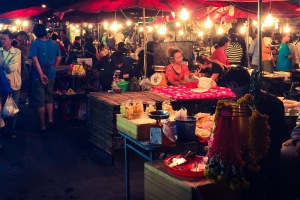 It was hard for John to leave Lopburi behind…he fell in love with those little monkeys. I was right with him, up until the point when one of them ripped a handful of hair from my head and then discarded it on the ground like trash. After that, […] 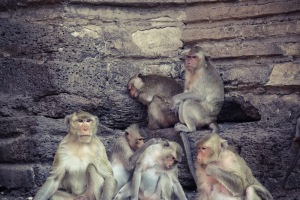 Greetings from Lopburi, possibly the most fantastic place that we have been. We arrived by train from Ayutthaya, with our arses still sore from yesterday’s all-day bike ride, which was followed by a well-into-the-evening beer bust hosted by Mr. Noi.