We spent two days touring around Huế, the first day dedicated to exploring the central ancient Citadel and Imperial Enclosure and the second day we spent among the Royal Tombs of the Nguyen dynasty. Huế is a city with a noble past, but also with a recent tragedy.

Huế officially became an Imperial City in 1802, when after founding the Nguyen dynasty, Emperor Gia Long moved his royal capital from Hanoi to Huế.

Over the next 30 years, the Citadel was built and the surrounding town prospered. 2 meter thick walls, stretching over 10km separated the Citadel from the outside world, only accessible via 10 gateways into the enclosure. Within the Citadel lies the Imperial Enclosure, which housed the Emperor’s residence, temples and palaces. 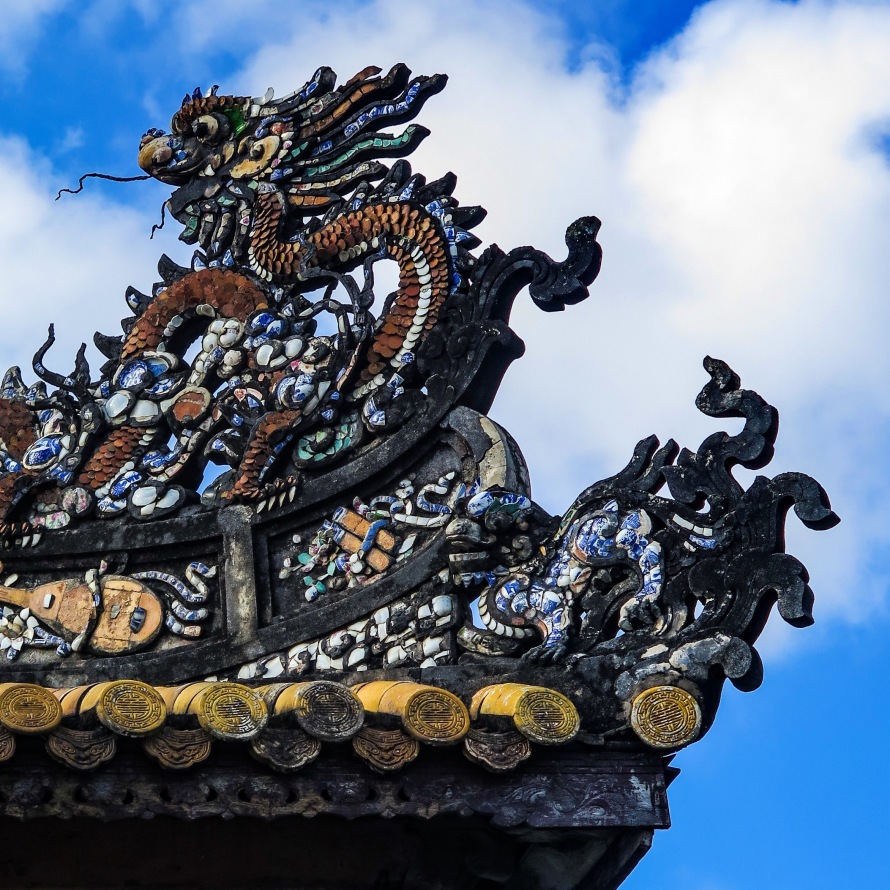 The elaborate roof of the Halls of the Mandarins

Doorway in the restored galleries of the Can Chanh Palace. 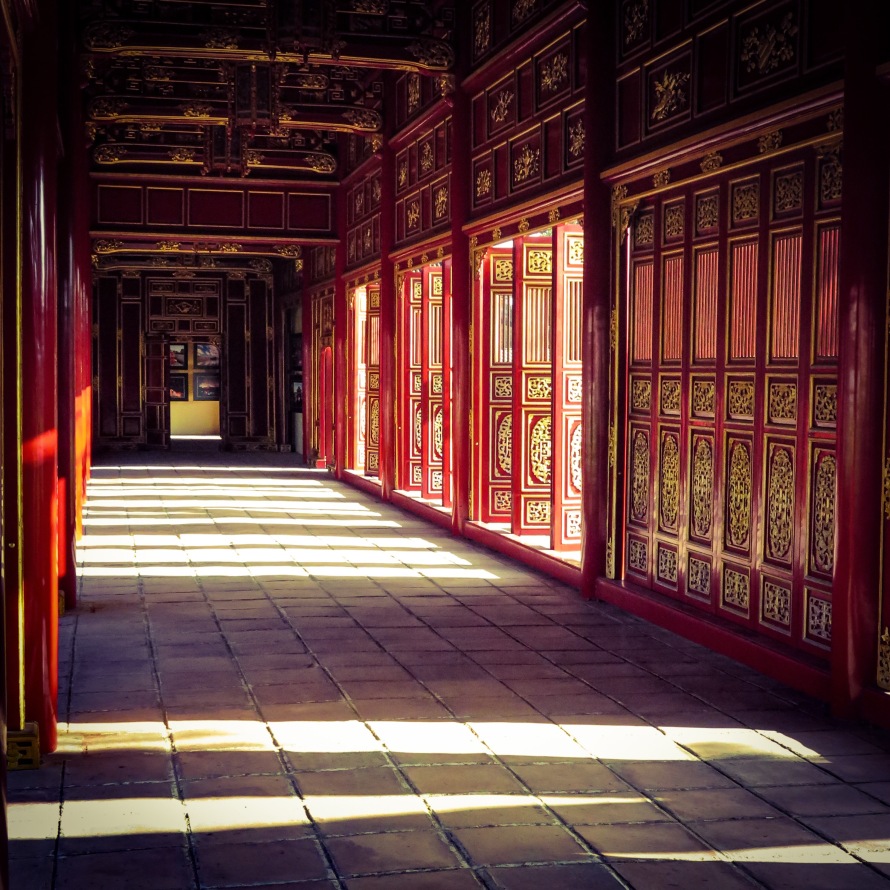 Sadly, the Citadel came under heavy fire twice since it’s completion, and now there are many parts of the city that lie in rubble-filled ruins. In 1885 the French stormed the Citadel and burned the library to the ground and stole every thing of value. After this, the Emperor remained, but lost all authority.

However, it was during the Tet Offensive in 1968 that Huế was almost completely destroyed. The Viet Cong seized the city, and during the 3.5 weeks of the VC’s occupation, more than 2500 people were killed in various awful ways; no one was safe. The VC did not discriminate…monks, merchants, govt. officials and intellectuals were shot or clubbed to death, some even buried alive.

The US and the South Vietnamese responded by almost leveling Huế, bombing the Citadel and dropping napalm on the Imperial Palaces. It is thought that around 10,000 people were killed, the vast majority of them were civilians.

What’s left is only a fraction of the original: only 20 of the Citadel’s 148 buildings survived the attack. There is a huge amount of ongoing effort being put into restoring the surviving buildings, and the Citadel remains a peaceful and beautiful place to explore. We also had good company, as we randomly met up with our Hanoi food tour companions, Tim and Julia.

You must forgive me for not taking accurate notes about each specific place while I shot hundred’s of pictures of doors and pagodas. This will be a theme throughout this blog, due to the fact that a) information about the remaining buildings was not posted at the site and b) I was constantly distracted by the stunning architecture and secret paths to keep track of where I was. I hope you will forgive me. 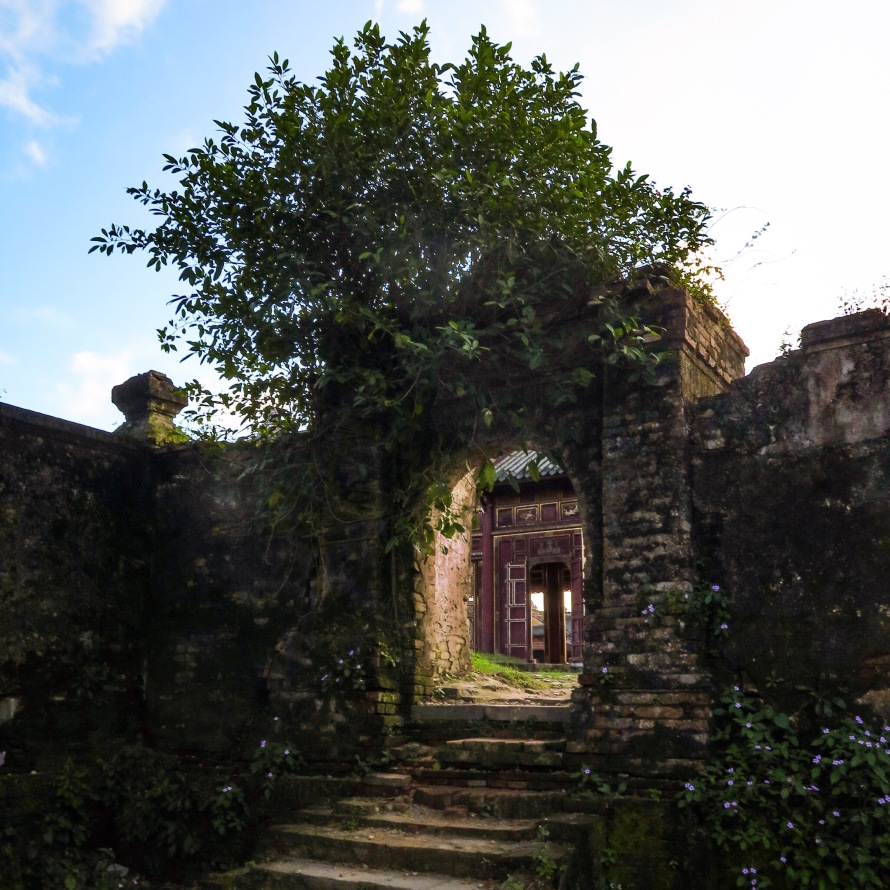 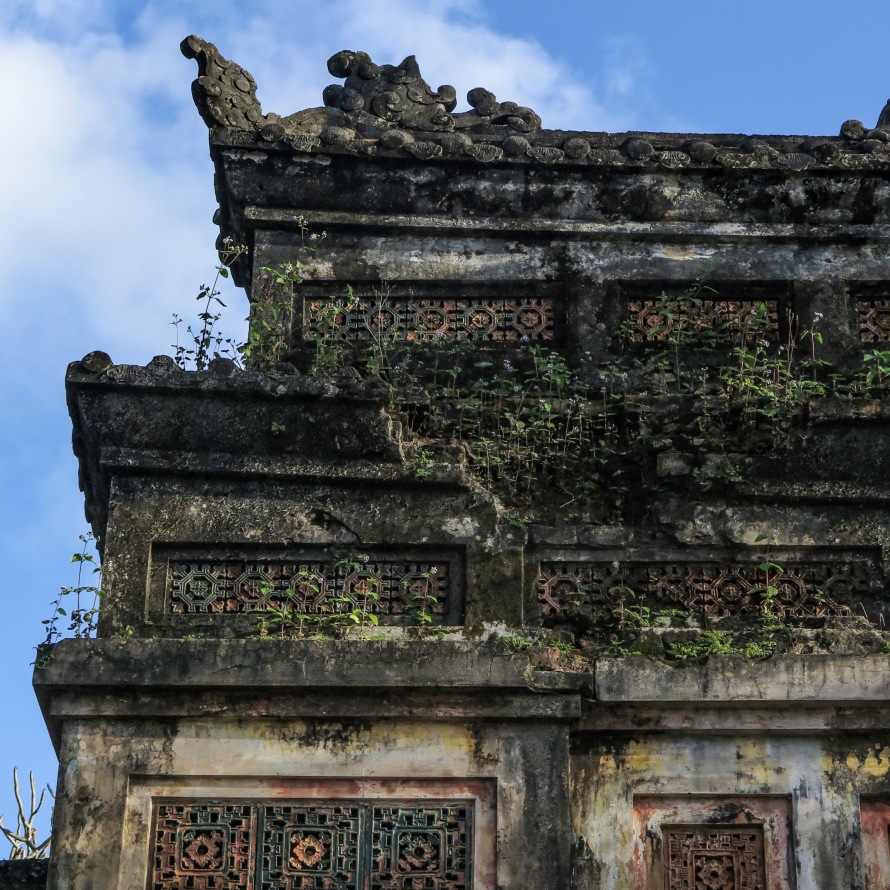 As you can see below, the buildings are adorned with incredibly detailed ceramic mosaics. I can’t imagine how long it took to complete the restoration of all this beautiful work. 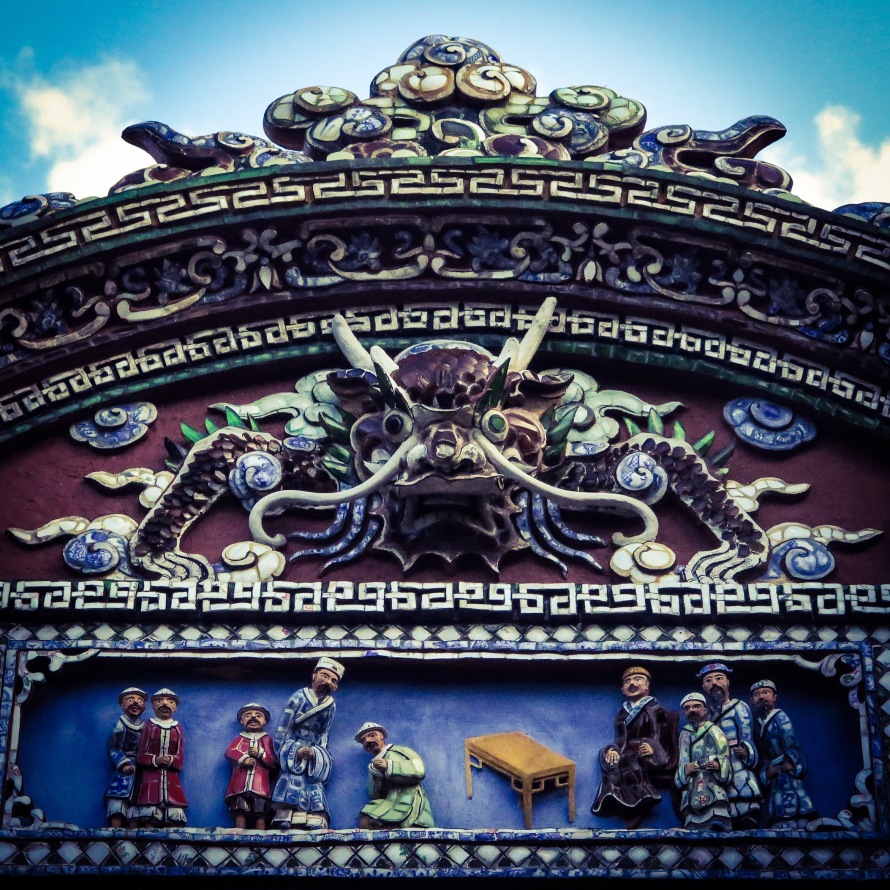 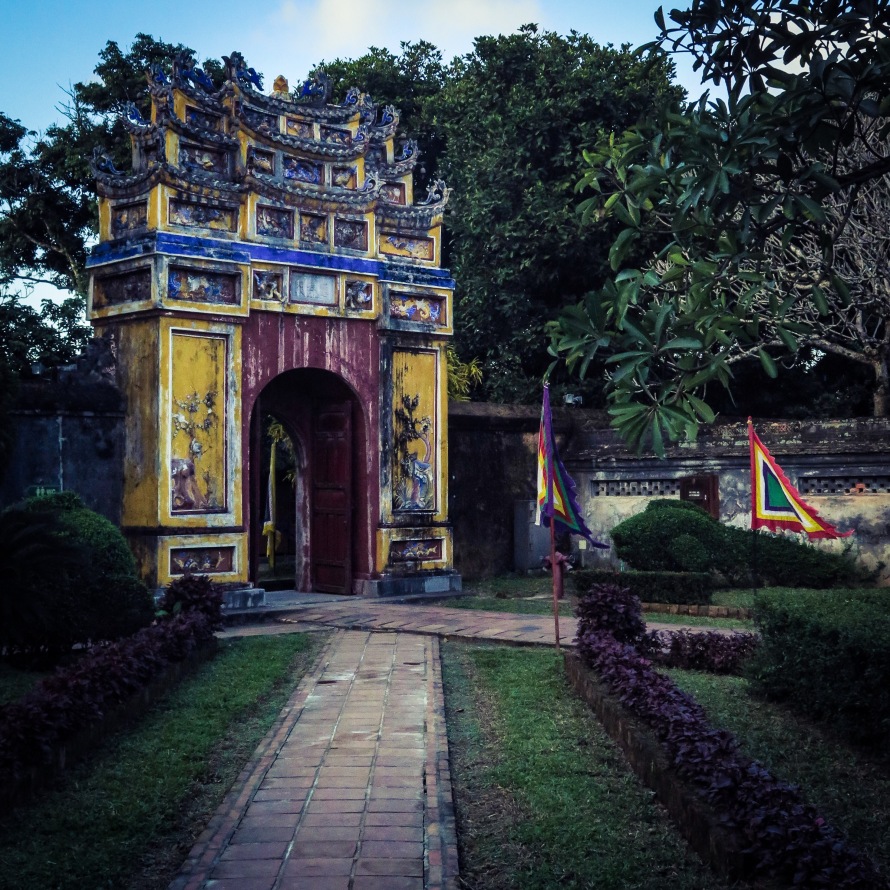 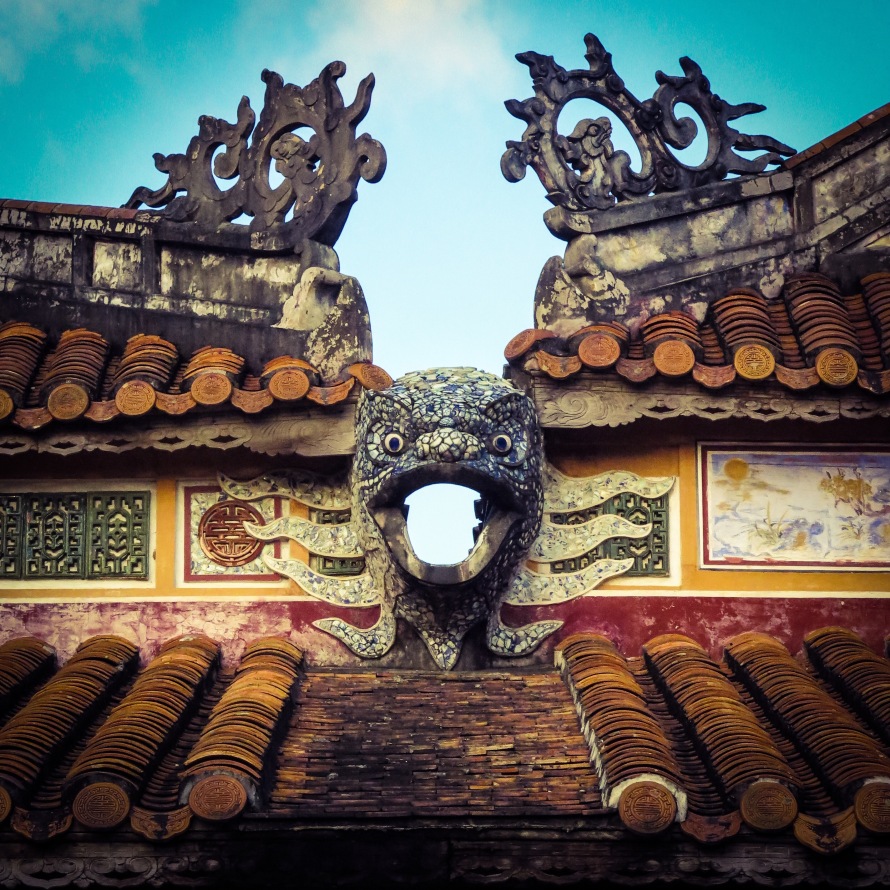 The Thai To Mieu Temple Complex has been completely restored.

The Hien Lam Pavillion dates from 1824

In the courtyard stand nine 18th century bronze Dynastic urns, each one dedicated to a Nguyen emperor.

The four of us wandered around the grounds until it was closing time. While we walked the 1.5km back to the hotel (Tim and Julia just happened to be staying right next door to us) we passed by an un-named attraction featuring rows of military vehicles and weaponry.

The boys peered through the fence and geeked out for what felt like an eternity while Julia and I rolled our eyes and paced around. I suppose this is John’s equivalent of buying yarn, so we didn’t make too much of a fuss as I have left him shuffling around outside many a yarn shop in our years together.

Like good Americans, we dined on pizza and beer before heading back to the hotel. We happened to be staying at the Four Seasons, which while not officially part of the chain, treated us as if we were rockstars for the entire time we were there.

The next morning we got up bright and early and shared a private car tour with Tim and Julia, visiting the Royal Tombs that are scattered around the countryside surrounding Huế. I was expecting large, but fairly simple and solitary burial grounds, but I was in for a surprise. Unlike the Egyptians, who cram a whole bunch of stuff inside their tombs, the Nguyen emperors built grand complexes spread out around their final (in some cases) burial grounds. Often time, these complexes were used as residences before the emperors passed on.

The first stop was the tomb of Minh Mang, which was planned out by MM during his lifetime, but completed by his successor. 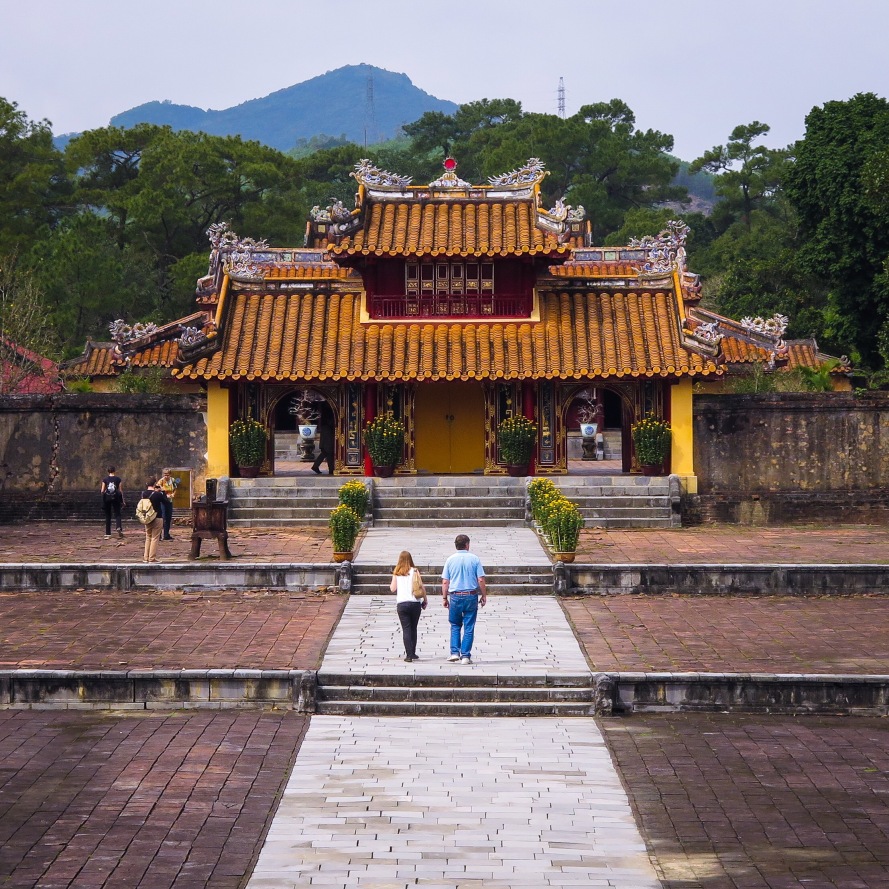 Tim and Julia, taking in the sights. 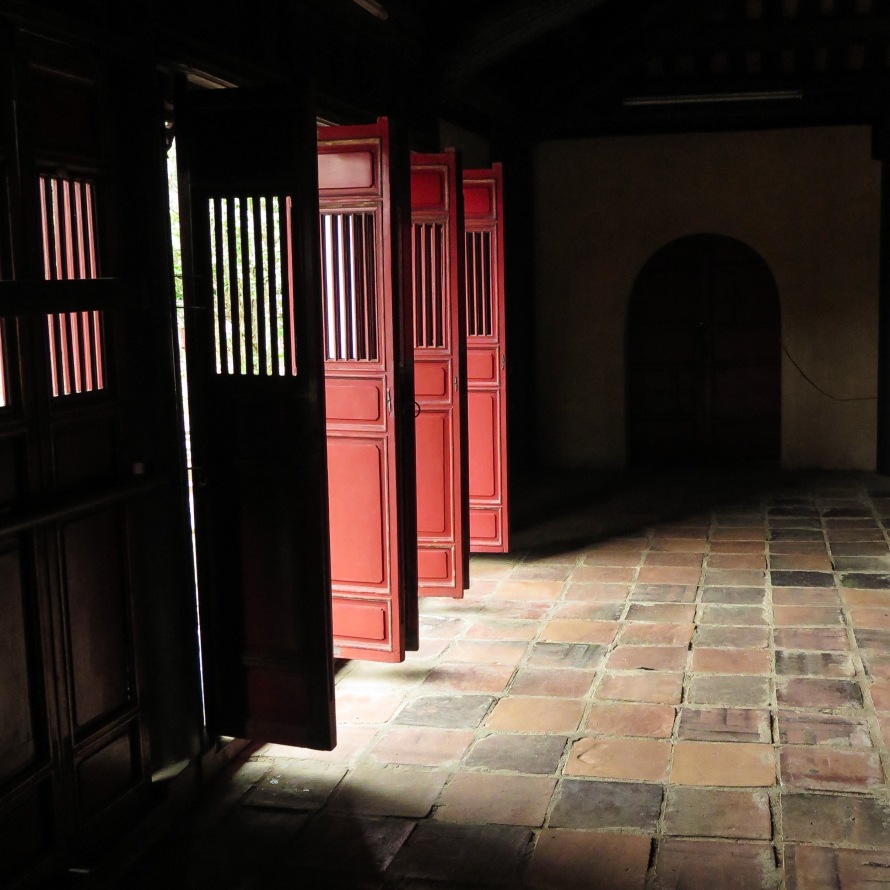 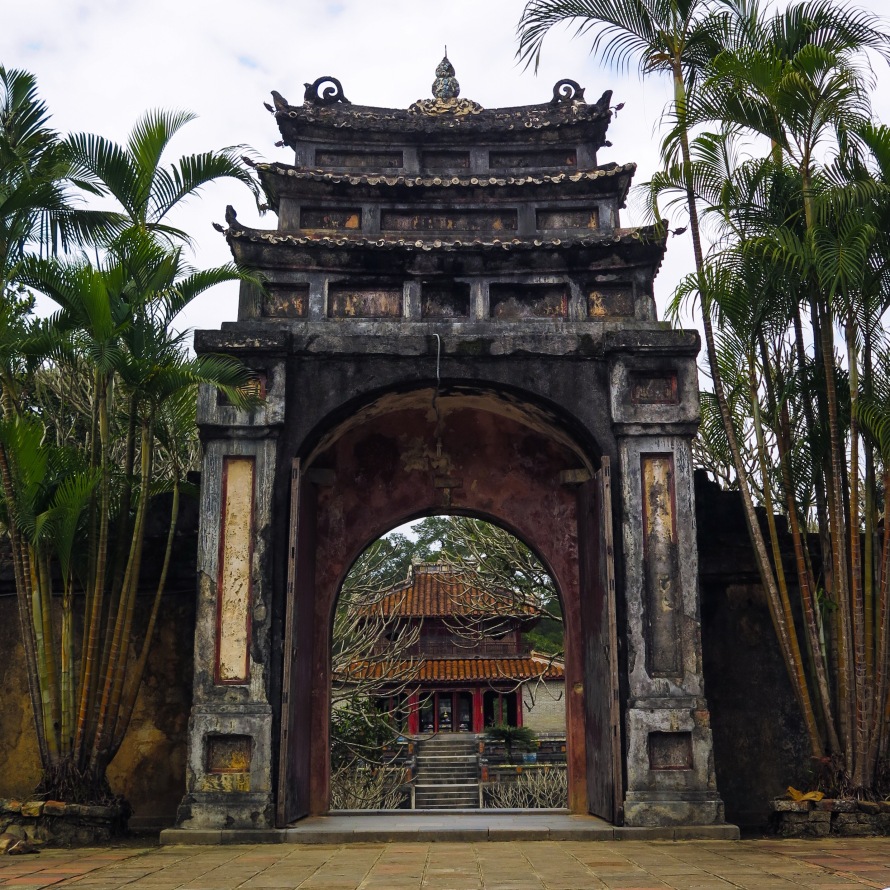 We were there mid-morning and the grounds were surprisingly crowd free. Spying something in the distance, I climbed over some bared wire fence and discovered a small structure completely taken over by trees… 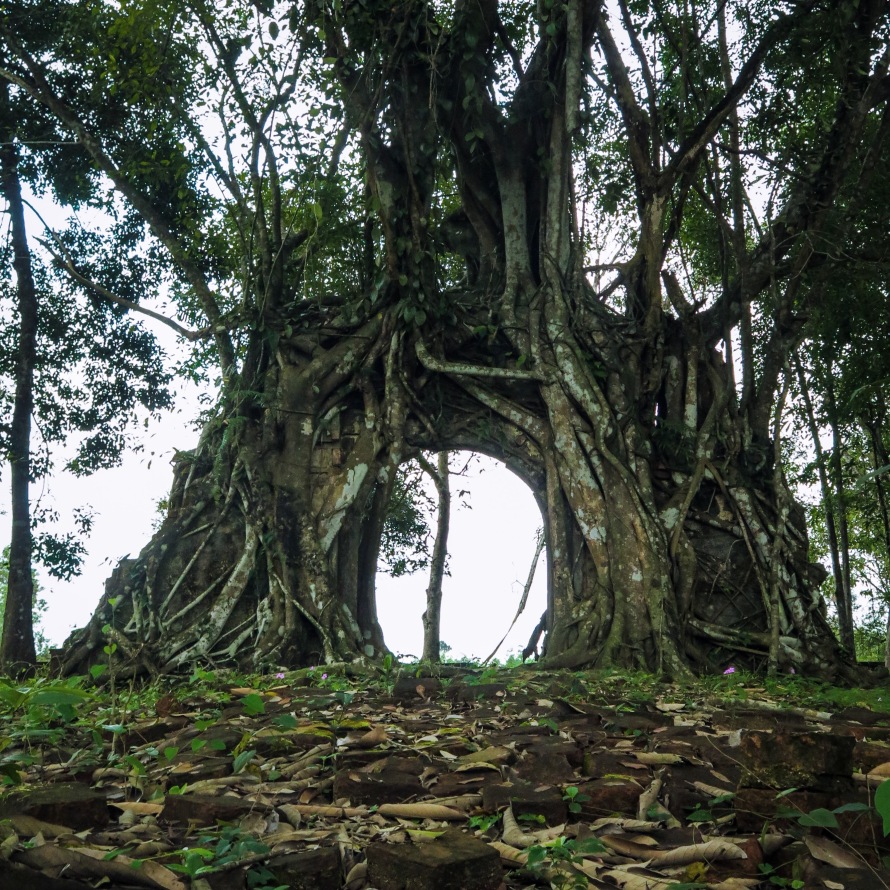 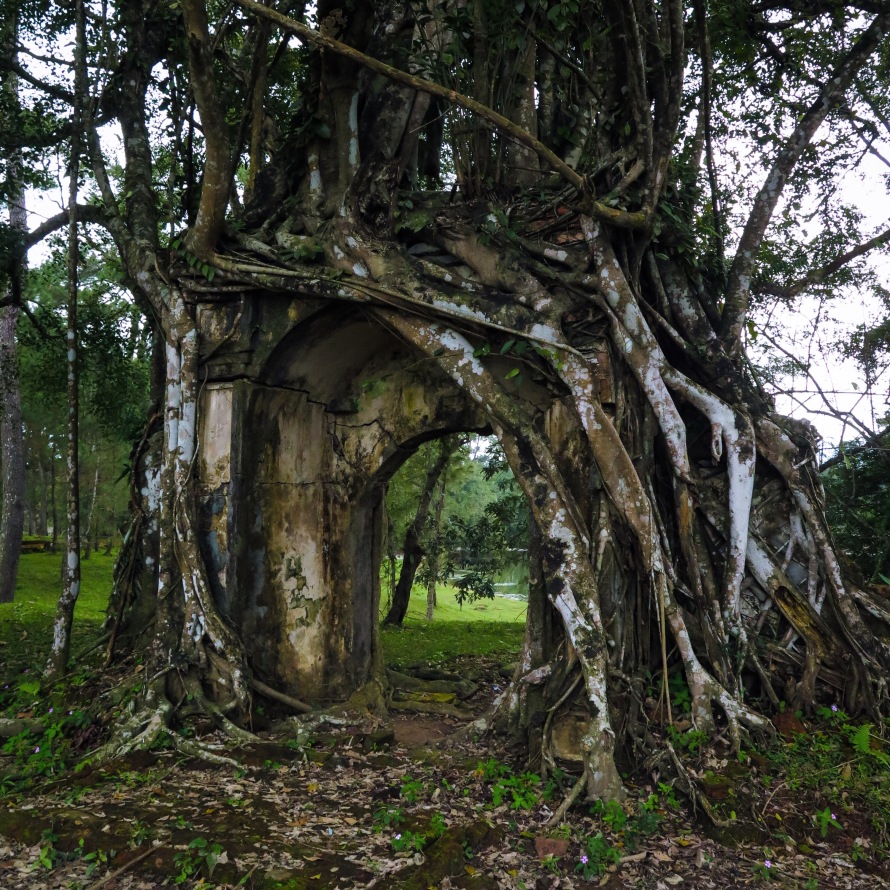 A small building had fallen into ruin and had been reclaimed by the trees…I don’t think I was supposed to be over here, but there was a sign in English explaining that they were storage rooms, so at one point it was included as part of the tour. That was going to be my excuse if the guards showed up and started to drag me away. Fortunately, the only person around was someone selling cokes…and she did not seem to mind my intrusion.

While I waited for the rest of the group, I was entertained by a group of kids that were very pleased to show me their jump-roping skills. They were one jump-rope short. 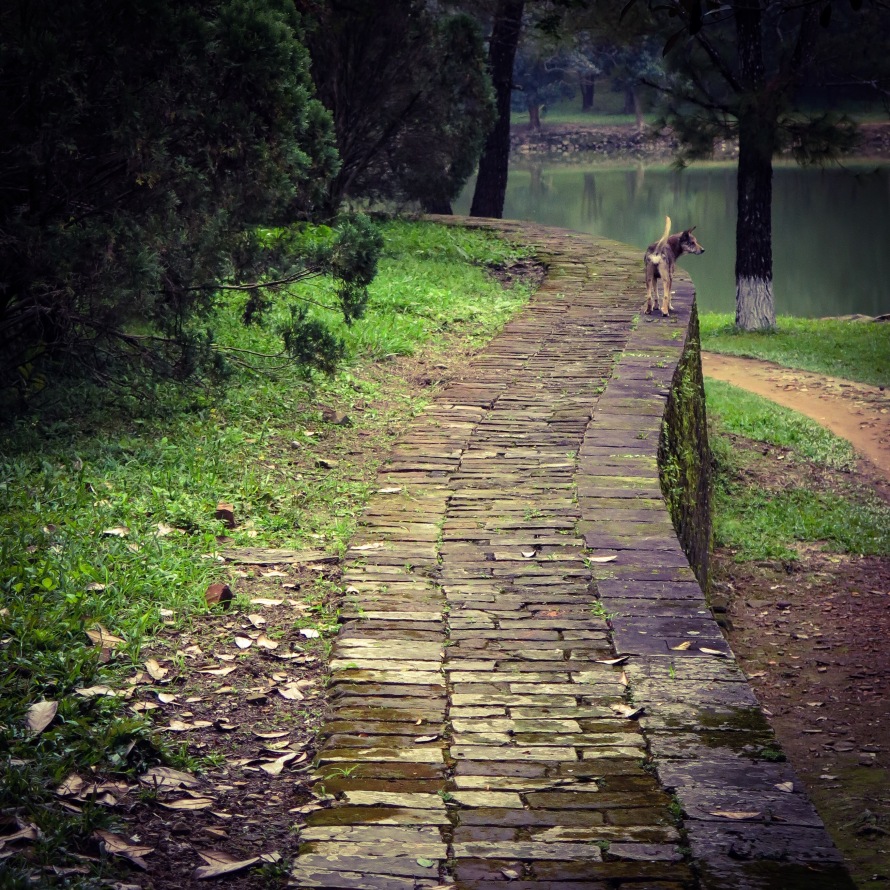 Tomb dog trotting alongside the moat.

Dragon bits taken off the roof for restoration.

The next tomb we visited was the Tomb of Khai Dinh. Khai Dinh was the last Emperor of Vietnam, his reign lasted from 1916-1925. By this time, the French had landed and enforced rule through the last remaining Emperor. The Tomb seems like a mish-mash of European and Chinese styles, all bleak and grey concrete on the outside and beautiful ceramic mosaics inside.

This three tiered complex has a true jewel at the top: Thien Dinh, which is where the Emperor’s remains are interred. The hall is covered in ceramic mosaics and the ceiling is a beautiful mural of wind and dragons. 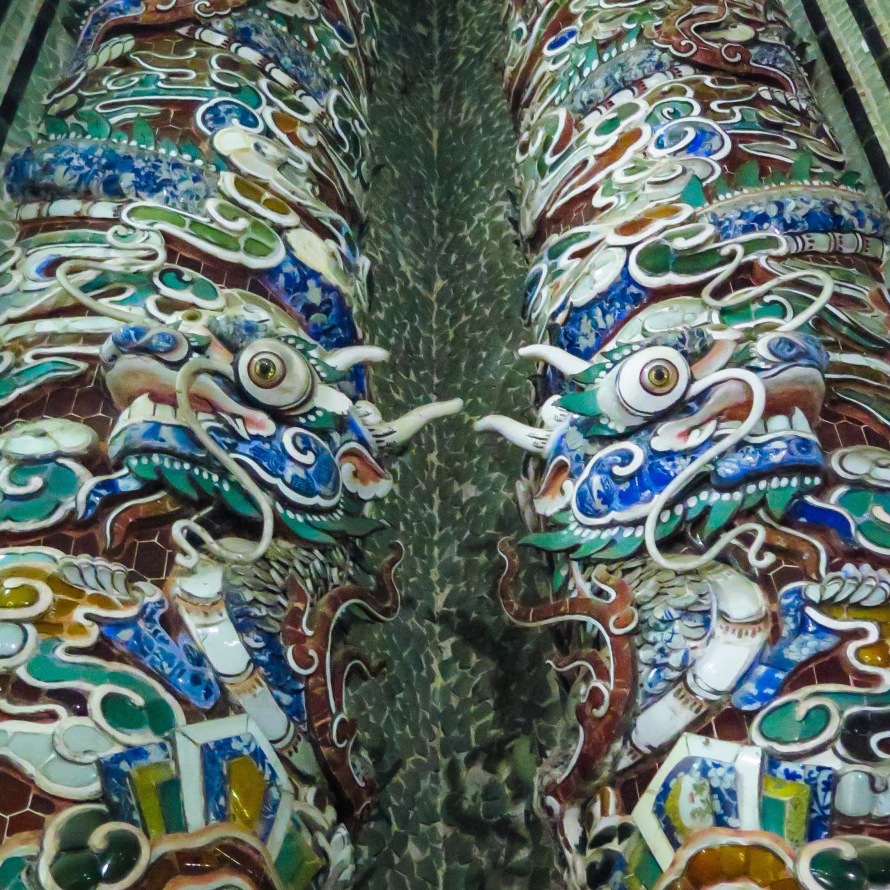 We overheard from another tour group that the mural was painted by a subject who was not a fan of the Emperor, so he painted it with his feet…a huge middle finger to Khai Dinh as pretty much everywhere in South East Asia, pointing or touching anyone with your foot is considered incredibly disrespectful.

Rain had started to pour down, so every one had crammed themselves in themselves into the one structure that would cover them, which happened to be the one we had just finished visiting There’s nothing like a rain shower to clear a crowd. Donning our rain jackets and opening our umbrellas, we made our way carefully down the slippery steps and decided it was time for a spot of lunch.

By the time we had dined, the rain had cleared, and we were off to the third and final tomb of the day: the Tomb of Tu Duc.

Tu Duc loved the ladies…he had 104 wives and many, many more concubines. Amazingly enough, he had no children…which might explain why his tomb was so big. Compensation, maybe? He was also 153cm tall, which is just over 5ft…just.

He is not actually buried here…his final burial grounds were a secret, the location of which is still unknown. This could be because the 200 or so subjects that were involved in the actual burial were immediately beheaded after the fact. 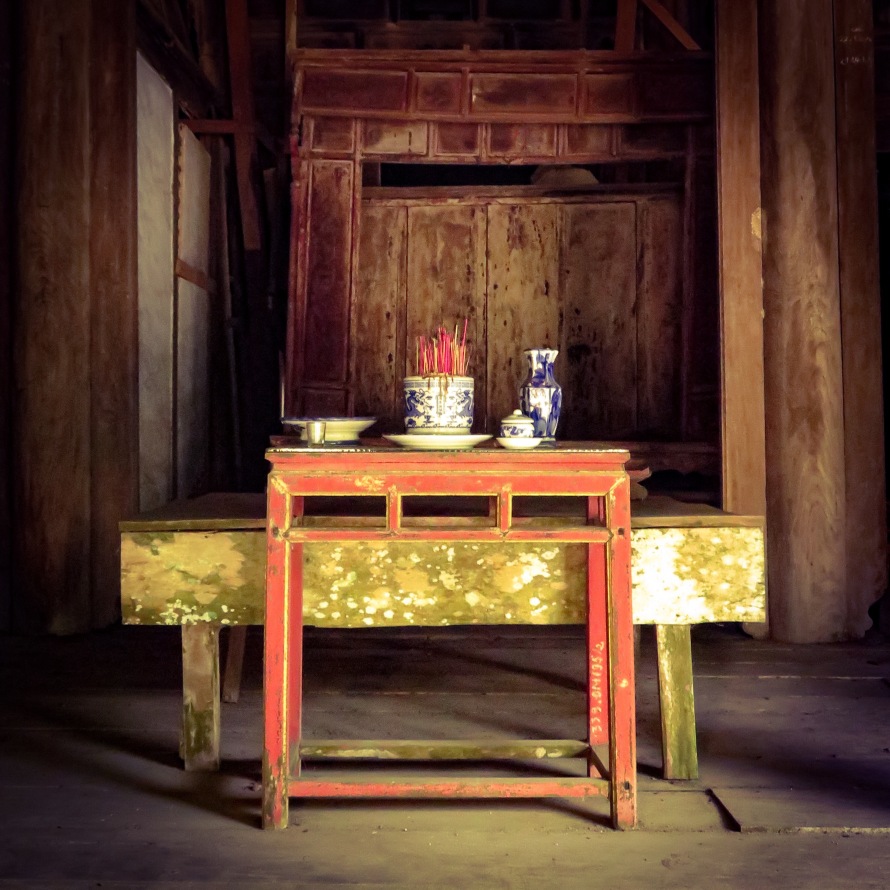 This tomb complex was by far my favorite as I snuck away from the tour groups and explored the grounds while every one else was looking at the main buildings. The grounds are delightful, especially when you feel as though you are completely alone. Lesser tombs for some of Tu’s favorite wives are tucked away in secret wooden glades; While I was exploring these structures by myself, I felt like I had been dropped into Pan’s Labyrinth. 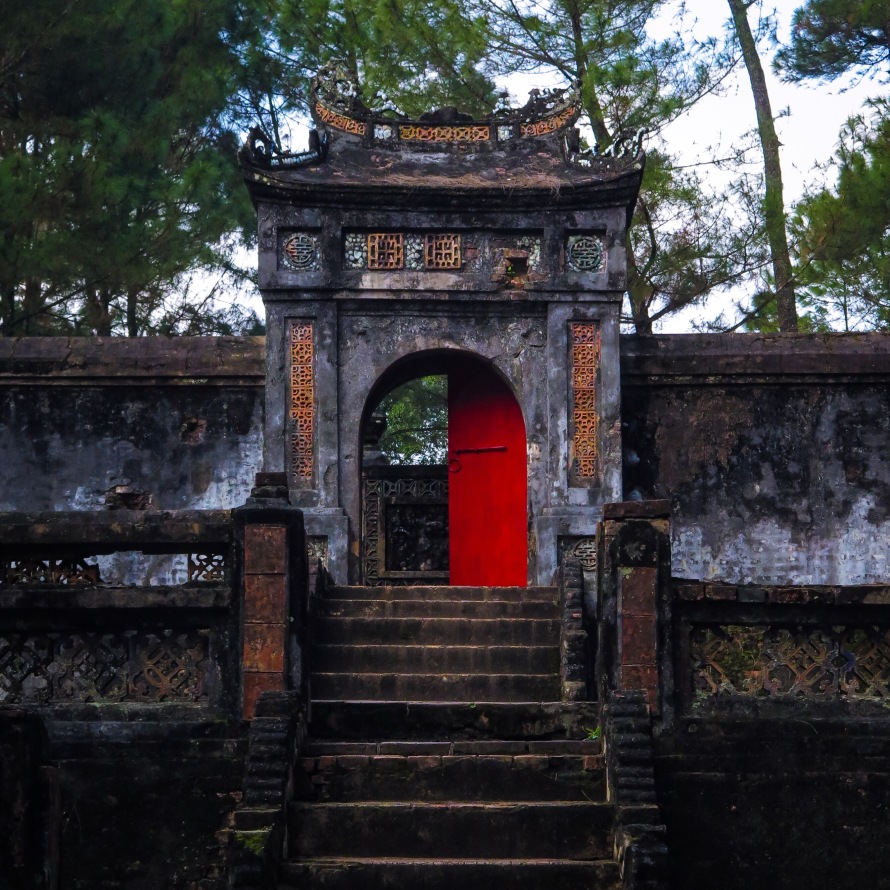 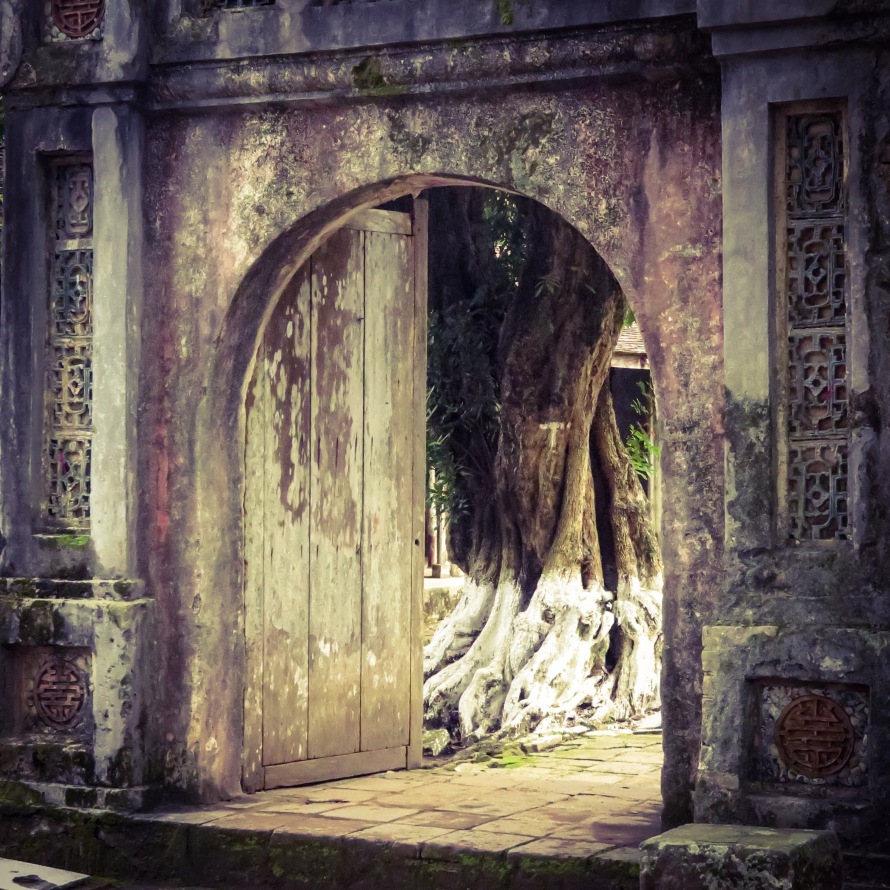 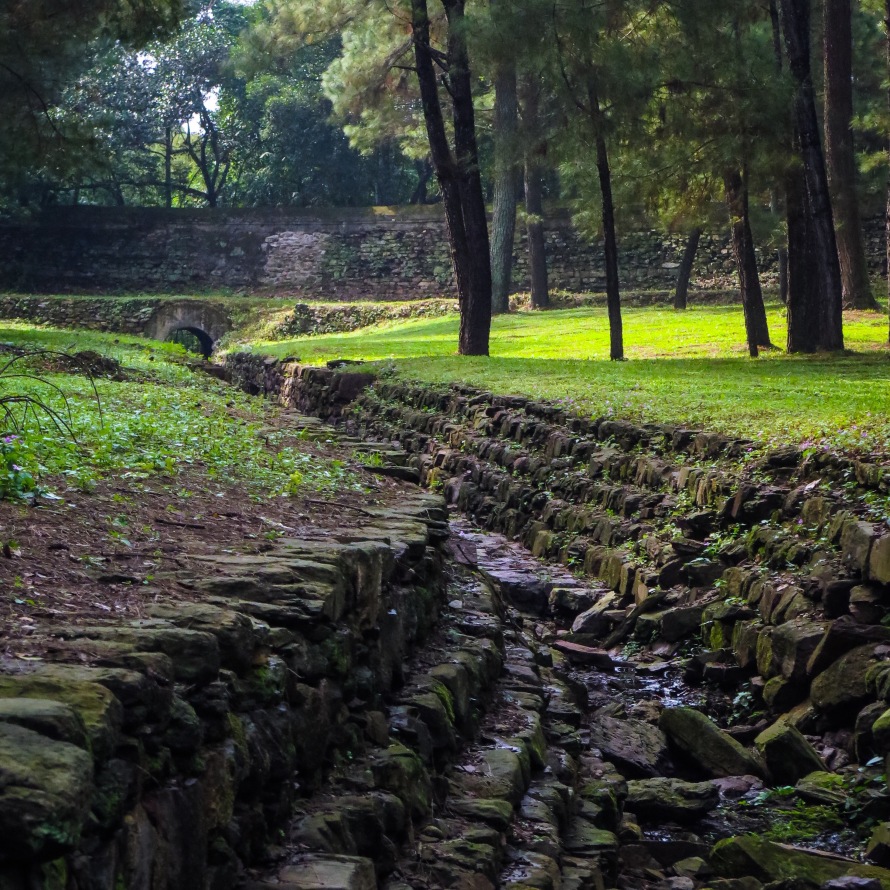 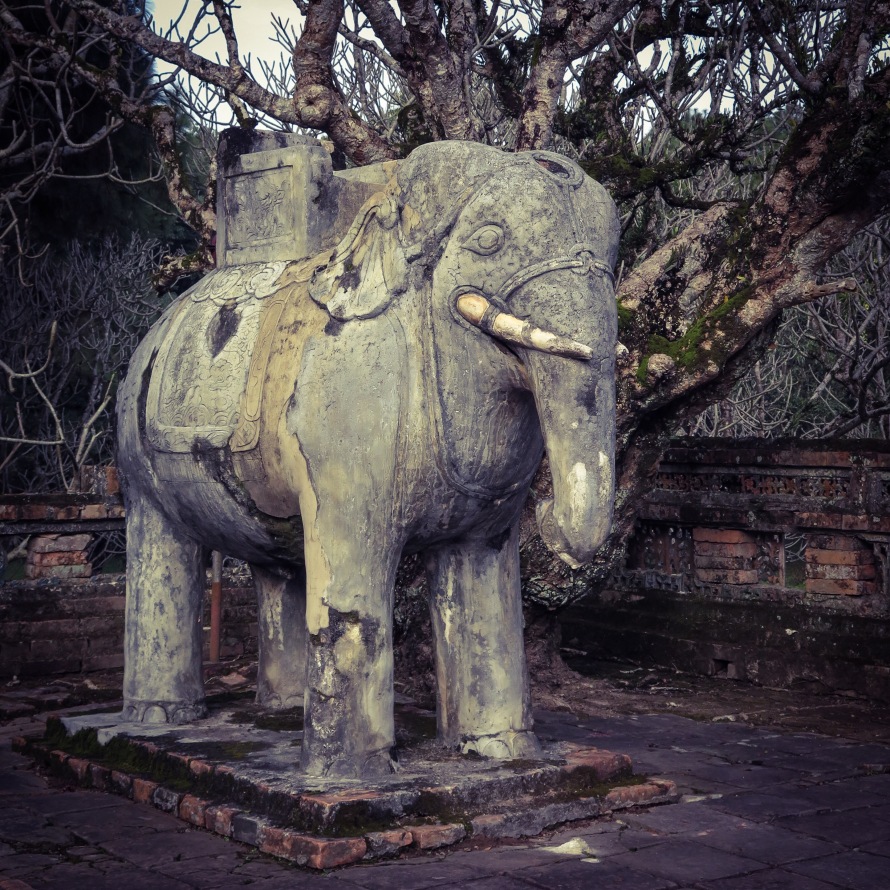 This picture sums up Vietnam perfectly: Beautiful buildings and scooters.

I finally caught up with the crew, who were looking a bit ‘tombed out’. We had one sight left which was the Thein Mu Pagoda. 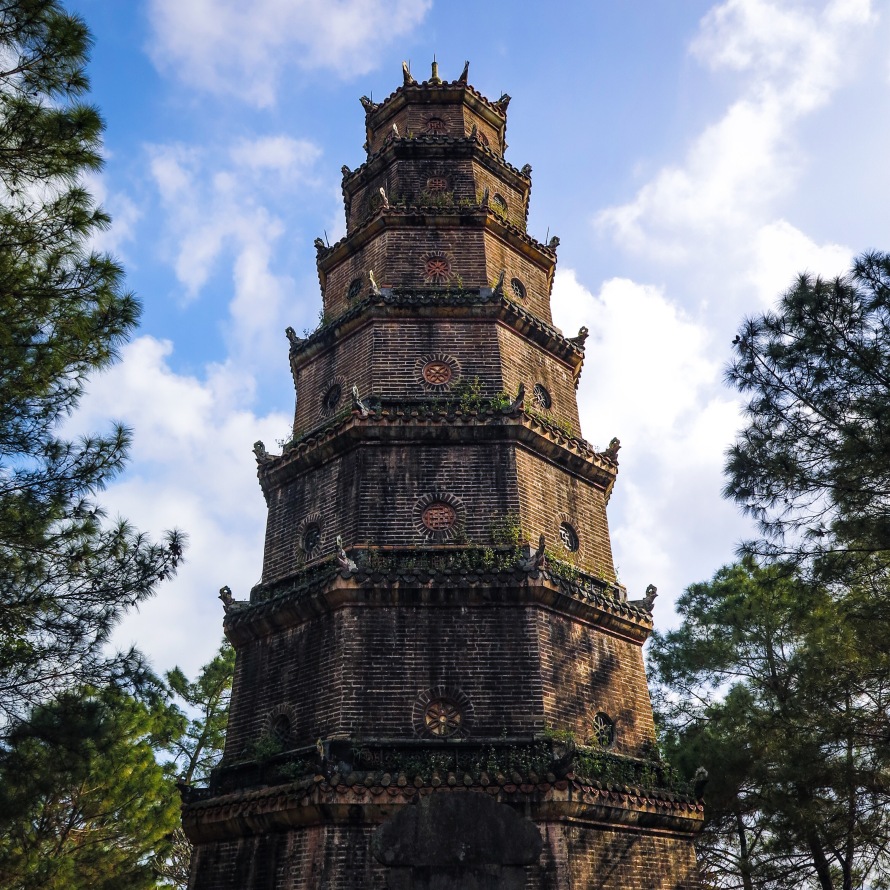 Thein Mu is a free attraction, quite close to the town, so it was swarming with people. At 21m high, it towers above the crowds like the worlds biggest wedding cake. Each of it’s seven levels is dedicated to a manushi-buddha, a Buddha that has appeared in human form.

Honestly, at this point I was pretty much done for the day…walking around in the humidity for 6hrs with an angry back had wrung every ounce of tomb-appreciation out of me. There was some other stuff there…a huge bell, some bonsai trees…but I stumbled past them all and went to sit by the Perfume River to watch the tourist dragon boats go by. 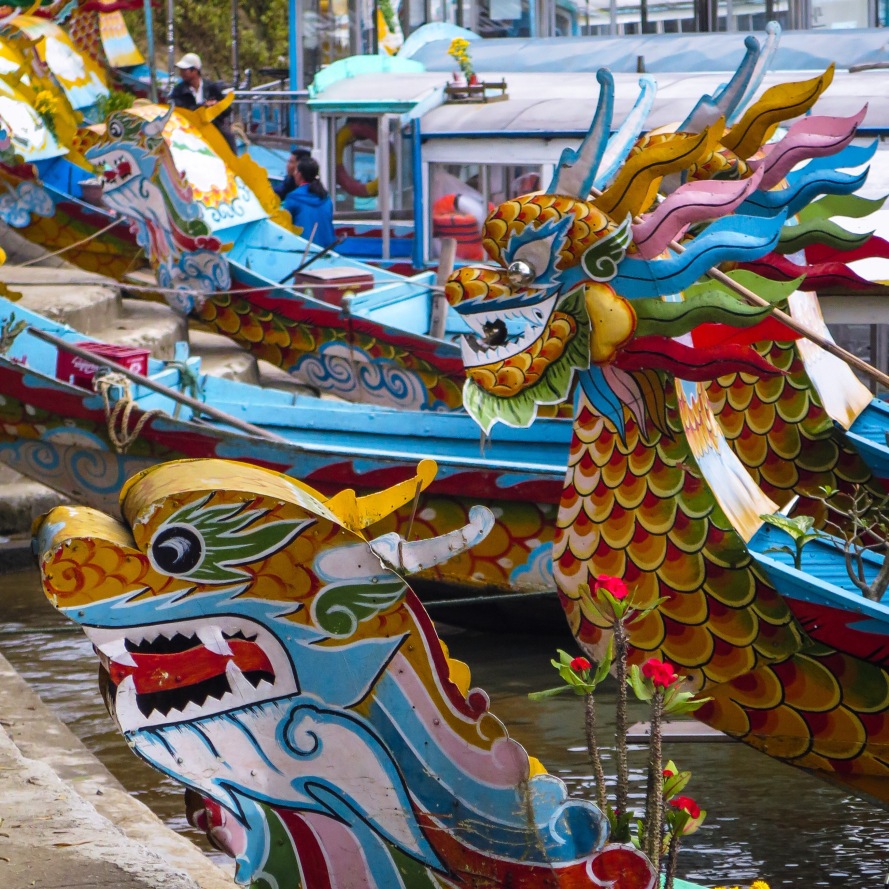 The evening came to a close at the bar with some beer, some Pork Satay and a crowd of rowdy Americans singing Sweet Caroline very loudly. For the record, we did not participate. The next day we are scheduled for a private car to Hoi An, in the good company of Tim and Julia. All reports from fellow travelers we met in Thailand was that Hoi An was supposed to be the absolute bees-knees…but was it? You will have to stay tuned for John’s report!

Tim snapped this shot of one of John’s forefathers. That’s real hair up there…on both of them!