We spent our first full day at Rancho Margot laying around, reading and eating delicious food. Okay, we did a tour…but that was only about 1.5 hours of an 8 hour day in which we actually moved around outside of our bungalow.

Other than the tour and a late night ant massacre in the bathroom, we lazed around, which I believe is appropriate behavior when you are comfortably situated in paradise (hammock included).

The previous morning, we were awakened to torrential rain for about 5 hours…we are in the rainforest after all. Top Hint: It rains here a lot…I don’t think I have ever been so consistently damp…and I grew up in the UK. I am reminded of Eddie Izzard’s ‘Darth Vader’ bit: This tray is wet…this tray is wet. Did you dry these trays in a rainforest?!? Putting on clean clothes in the morning is akin to struggling into a wet bathing suit…but, hey…I’ve not got much to complain about.

This morning, we rose at 7:00am to a beautiful blue sky, so we embarked upon a hike up to the mirador to see Volcán Arenal.

Arenal is a fairly young volcano, in geological terms, at about 7500 years. Although she’s still a teenager, she’s definitely on the honor roll. From 1968-2010, Arenal has been spitting out ash, lava and other volcano stuff pretty consistently.

Her last significant eruption was in 1968, completely destroying three small towns on the western flank. The town to the east was completely unscathed. This town changed it’s name from El Borio to La Fortuna (the fortunate) which is, in my opinion, a little balsy. Sort of like a big middle finger to Mother Nature. They’ve got confidence, I will give them that.

The route to the mirador and down to the nearest town, El Castillo, was described as a 5km trek, with 25 minutes of steep incline at the beginning. We have come to believe that Costa Ricans use ‘kilometer’ fairly loosely. Our 1km walk to the Doka Plantation was probably about 2km. Our 5km walk today…well, our guess is about 10.5km. From now on, we are prepared to double the distance we are quoted. They got one thing right, though…it was 25 minutes of a steep incline. What they didn’t think was worth mentioning was that it was at a 45 degree angle path of boot-sucking, slippery-slidey mud.

Being sweaty is my least favorite thing. EVER. I was wearing long pants and long sleeves (to keep the mosquitoes at bay) and slathered in bug spray and sunscreen. I was slick with sweat…sweat combined with greasy preventative products…and this ‘path’ just kept going up. I’m not kidding about the 45 degree angle thing. I knew there was an amazing thing at the top..but it was hard for me to stay motivated. Just keep swimming…just keep swimming…but I still wanted to sit down in the mud and have a cry. I, most firmly, did not want to do this any more. It finally came to an end…it always does…and the view was indeed spectacular.

Y’all…thats a for real volcano.

There only seemed to be one path down, presumably to El Castillo…so we started downhill. The path was definitely less muddy and steep, but I had a sneaky suspicion that we may be going the wrong way. John, confident as ever, informed us that we were having an adventure. Not 5 seconds later he said “I sure would feel better if I had a machete.” 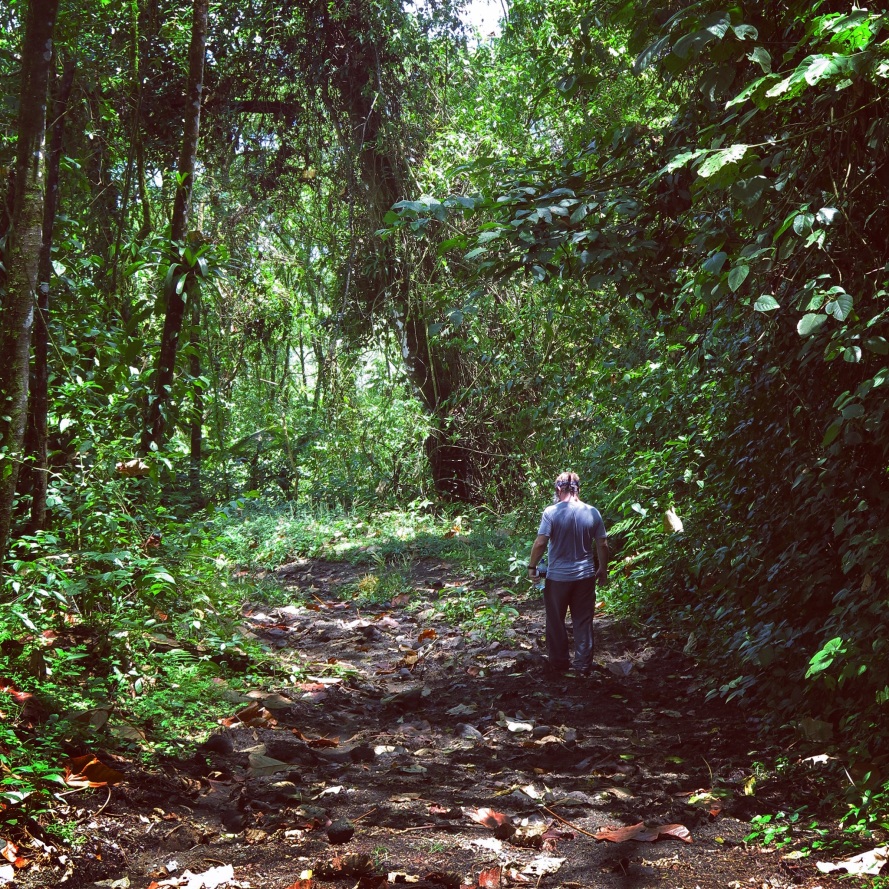 Midway through adventure trail, we came upon some horses. There were a couple that really didn’t want to move from the path. They definitely were not clued into my body language, which consisted of transferring my weight from one foot to the other…like I had to pee. Horses intimidate me, but I was trying to put a good face on it. They saw right through me, and stayed put.

John cautiously, but confidently, breezed right by them. I shuffled about, biding my time, envisioning how fun a kick to the throat or a broken rib would feel this far away from home. John admitted to me later that he was as terrified as me…but you wouldn’t have guessed. Finally they maneuvered slightly out of my way and I scuttled past. As I was passing by the last foe, he started towards me. I managed to squeak out “IdontwanttobeyourfriendIdontwanttobeyourfriend” and the horse gallantly let me pass.

Eventually, our downward path spit us out onto the road…yep, the same terrifying road we had travelled not two days ago. It was much lovelier in the daytime, offering up some pretty spectacular views of Lake Arenal and Volcan Arenal. 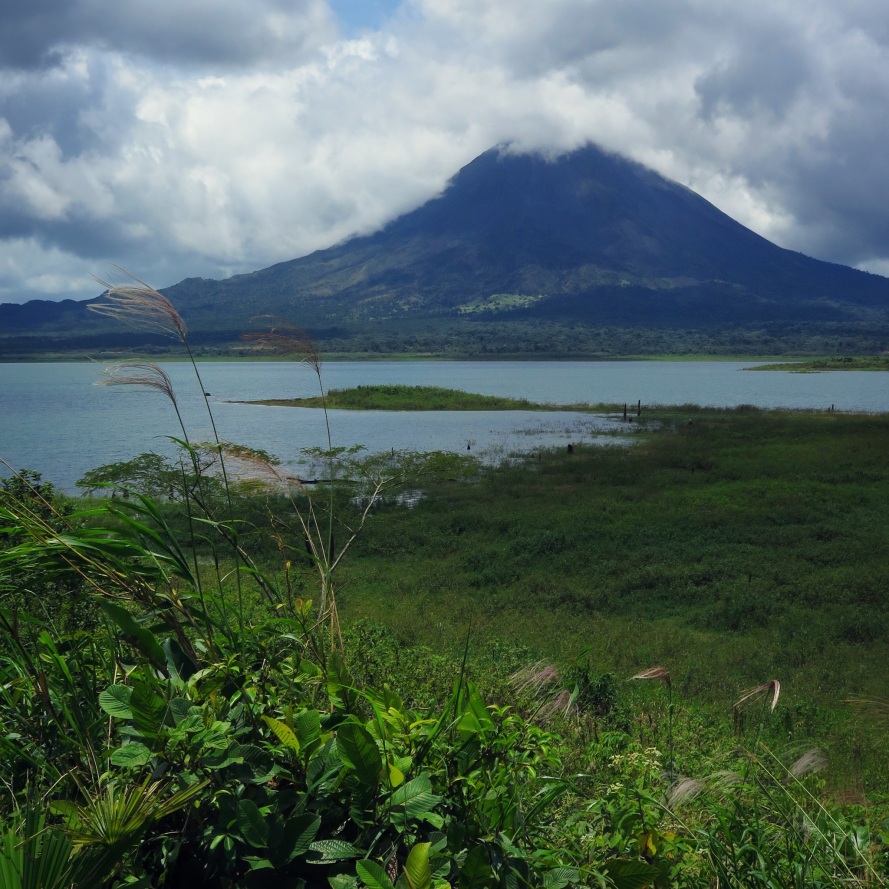 For no other reason than it was still before noon and John wanted a Coke, we decided to turn right and head to El Castillo.

Costa Rica is 8-10 degrees north of the Equator, which means the sun is strong, as are the UV rays. We had slathered our outside bits with sunscreen…but didn’t think we needed to provide for our covered bits. With 94% humidity, that sunscreen seems to slide right off you anyhow. A lot of the road was in direct sunlight, and we learned a valuable lesson about 4 hours later. Sunscreen under your clothes.

We finally reached El Castillo, about 4.5km later, and rapidly downed some ice cold coke and nacho cheese doritos. With zero energy for the Butterfy Emporium or Snake Zoo we did the most depressing thing ever…head back the exact way we came for another 4.5km. Amusingly, the sign post to Rancho Margot said 3km. Coincidentaly, the second signpost about 1km down the road also said 3km. We actually passed a set of signposts that included two separate signs for the same ranch; one said 1km and the other said 2.1km. Like I said, it’s more of a suggestion.

By the end of it all, we were looking a bit ragged. The vultures started circling… 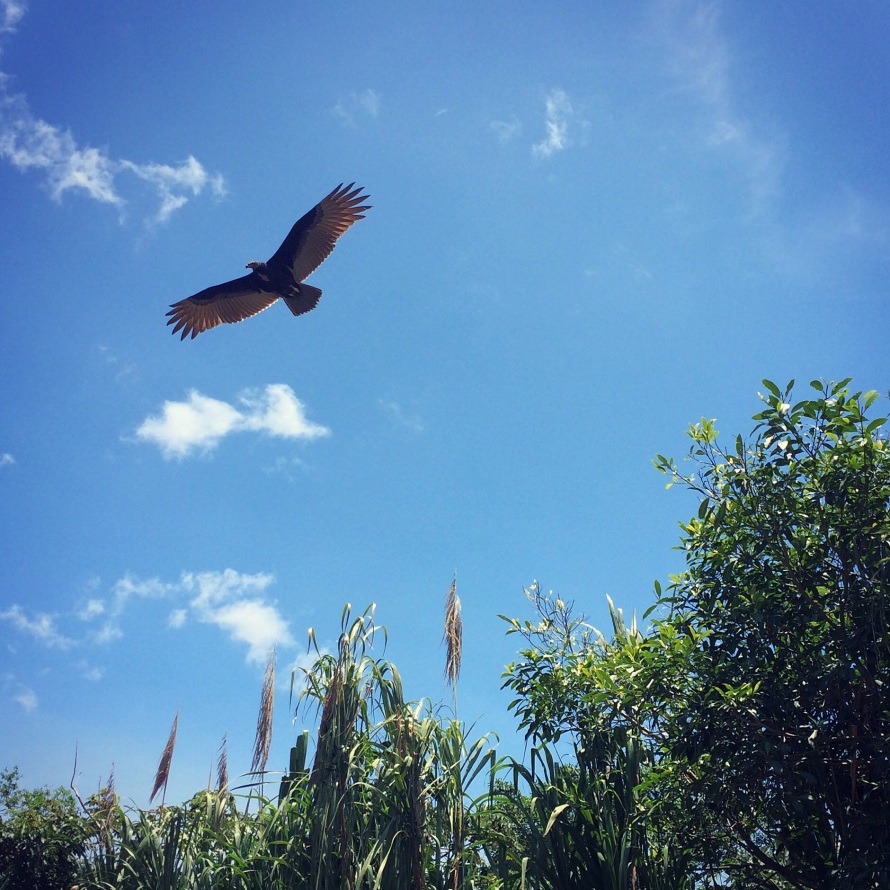 Fortunately, we got home in time for lunch and just before the rain started. By rain, I mean torrential downpour + thunderstorm. John headed into the cabin for a nap under the mosquito net while I read trashy novels in the hammock. After a while, the rains stopped and Eddie Lizard kept me company.

We are here for 4 more days, so I think I am implementing an equal ratio of lazy day:active day. Thanks to the book exchange, I have plenty of trashy novels to keep me amused and John has started reading The Stand, so I think we are set for tomorrow.